A Philadelphia City Council committee approved legislation to make these “streeteries” a permanent fixture in some parts of the city last week – a move that many in the Northwest say is a very good thing. 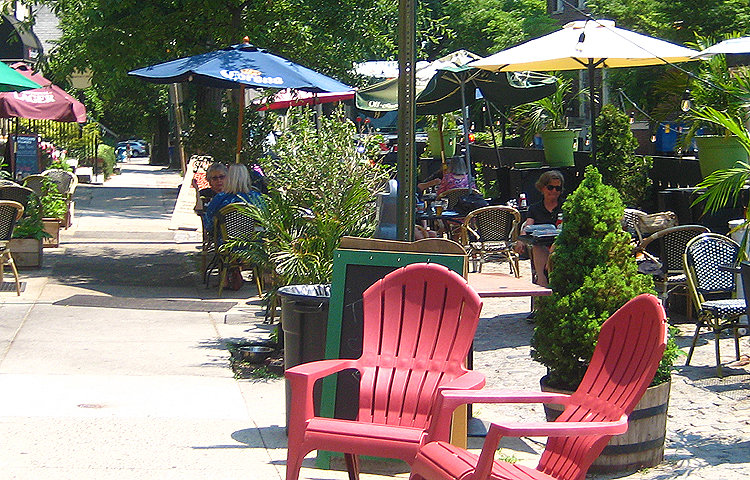 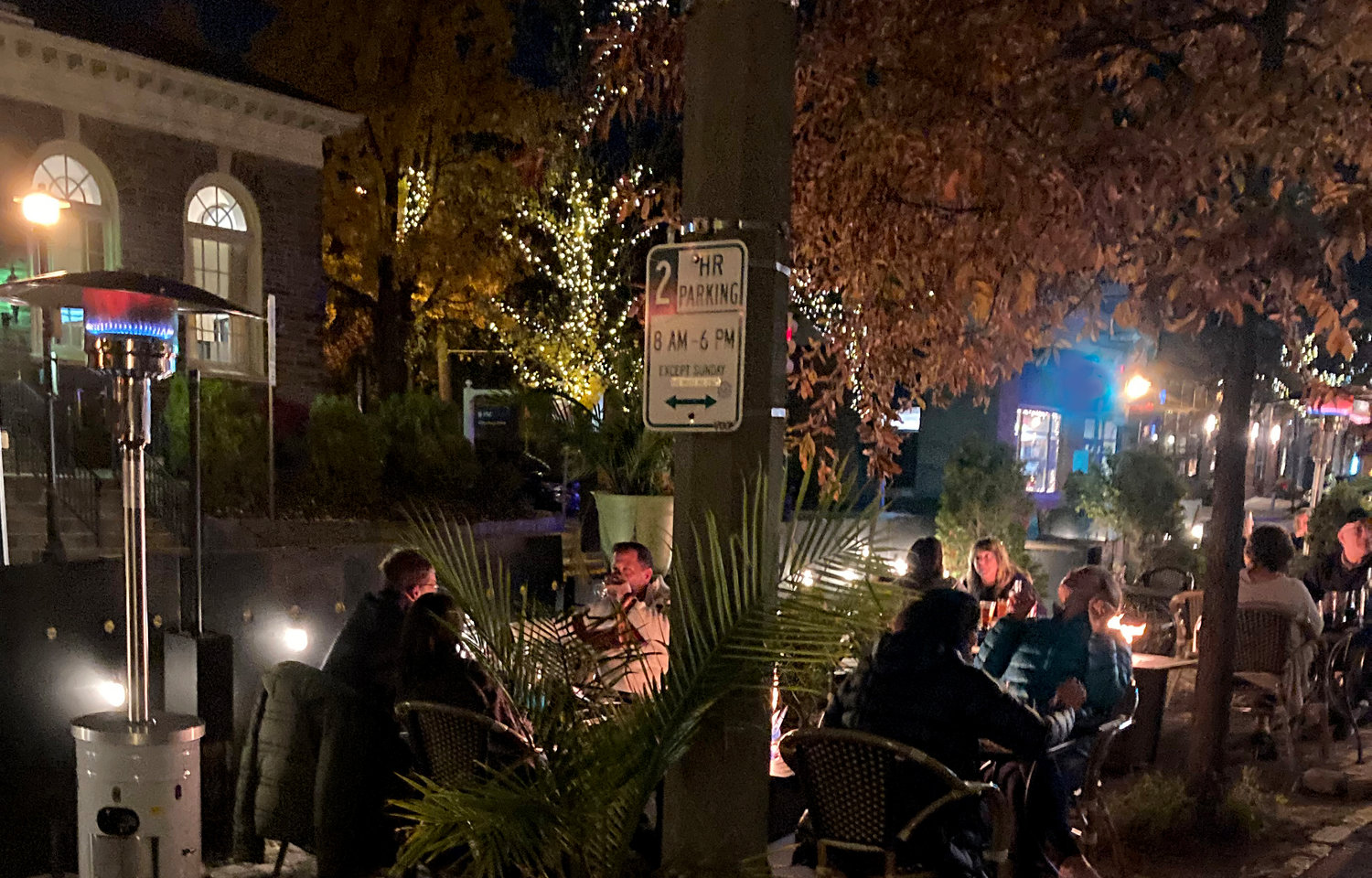 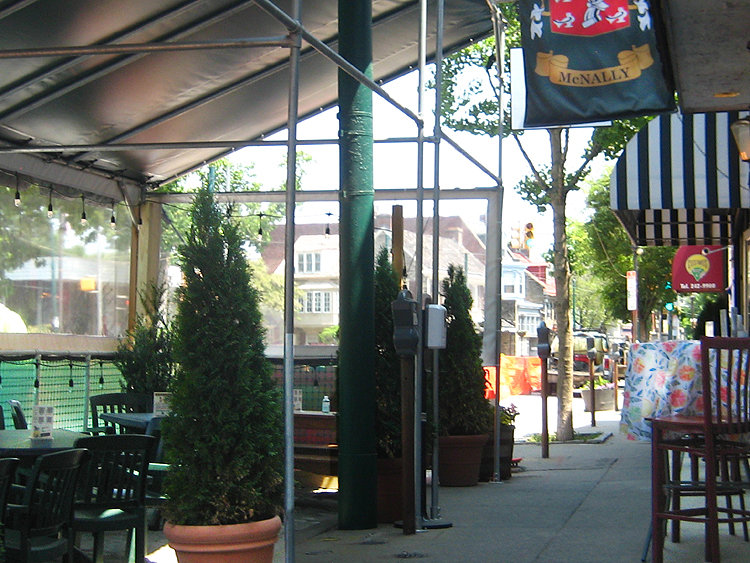 McNally’s. Like most of older Philadelphia neighborhoods, sidewalks are too narrow for outdoor seating, make the expansion into parking spots necessary.
Walt Maguire
Previous Next
Posted Thursday, November 18, 2021 6:00 am
by Tom Beck

The popular outdoor seating areas that appeared beside many restaurant façades at the beginning of the Covid-19 era may soon become a permanent fixture along Germantown Avenue and other parts of the city.

A Philadelphia City Council committee approved legislation to make these “streeteries” a permanent fixture in some parts of the city last week – a move that many in the Northwest say is a very good thing.

The owners of all three Chestnut Hill restaurants that have streeteries - McNally’s Tavern, Campbell’s Place and Iron Hill Brewery – have all spoken positively about the impact they’ve had on their business.

“I do think that streeteries are a great thing,” said Anne McNally, co-owner of McNalley’s Tavern. “They saved the majority of the restaurants through Covid.”

She did say, however, that there should be some guidelines regarding quality before they become legally permanent.

“I do think we need some guidelines for the structure of them and how they're built for the safety of the people eating in them,” McNalley said. “I think the structure needs to be more sturdy than some of the ones that I’ve seen.”

Car accidents involving streeteries have already occurred. In May of this year, a car crashed into a streetery in front of Cafe La Maude in Northern Liberties, injuring eight people.

The legislation that advanced out of committee last week would make streeteries permanent only in certain areas of the city, including on Germantown Avenue from Cresheim Valley Drive to Rex Avenue, which is the main thoroughfare in Chestnut Hill. It would also make streeteries permanent along Germantown Avenue in Mt. Airy, and parts of Fishtown, Northern Liberties, the South Street HeadHouse District and Fairmount, among others.

Any restaurants seeking a streetery outside of the designated areas would need its corresponding district council member to sponsor and pass legislation in City Council granting the establishment a license for a streetery. McNally expressed her approval to the Local about this aspect of the bill.

“You should have to prove that you can keep it clean and safe,” she said. “I want there to be some basic guidelines that we all have to adhere to.”

Richard Chong, manager at Iron Hill Brewery, said his restaurant’s streetery was convenient for accommodating people who are unvaccinated and others who didn’t feel comfortable eating inside, but that’s he’s skipping that setup for this winter.

“I think especially in these crazy times it’s important to give people an option to eat outside, especially when the weather is beautiful,” he said. Still, “we don’t have the staff to man it,” he continued. “It’s getting colder, and we had to draw the line for the amount of people we have staffed if it was worth it.”

Chong, who noted that residents can expect his restaurant’s streetery back when warmer weather returns in the Spring, was also concerned for his staff’s safety.

“I just don’t want to get my staff sick forcing them to run in and out,” he said, “We can’t manage it with the amount of people we have working. I can’t afford to have them get sick because then we’ll have to shut down.”

Managers from Campbell’s Place said that their streetery is, in part, meant to cater to unvaccinated people.

“I think having extra space for people outside who aren't vaccinated is a good thing,” said Donta Whitsett, kitchen manager at Campbell’s.

“It also gives a whole other restaurant out there for people who are uncomfortable eating inside,” said Campbell’s front of house manager, Kate Romberger.

Romberger told the Local that Campbell’s is “willing to work with the city” in order to create a desirable outdoor eating experience for its customers.

“We enjoy our streetery,” said Romberg. “We think it's great for the community.”

A vote to make the proposed legislation law is expected to come before the end of the year, when the current permits for streeteries are set to expire.

Allan Domb, who introduced the streeteries bill in September, called the legislation’s advancement out of committee “a major step toward making this remarkable outdoor dining amenity a permanent fixture for our city.”

“Streeteries have saved so many restaurants throughout the pandemic, and we expect the permanency will allow businesses to invest in high-quality, safe, and accessible structures that will support the future of our city,” he added. “While there is still much work ahead of us to address all outdoor dining options, we are advancing legislation today that will help our current businesses keep their doors open in any environment, make Philadelphia attractive for generating new businesses and become a model for success as an exciting, world class city.”