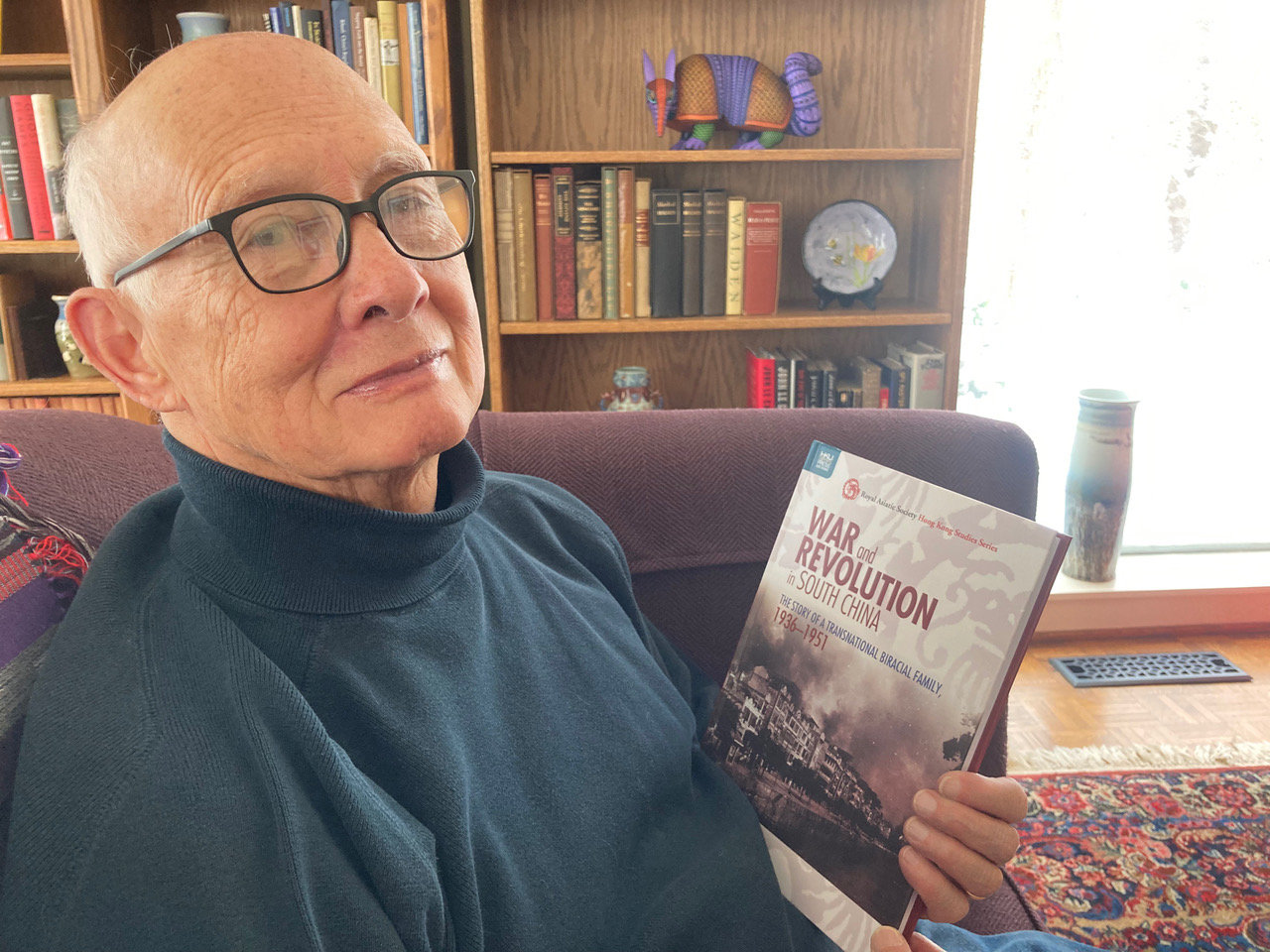 Edward J.M. Rhoads, a long-time Chestnut Hill resident, is a brilliant scholar with five books and two- dozen research papers in academic journals to his credit, as well as a doctorate degree from Harvard University (1970) in history and Far Eastern languages. However, the retired history professor just finished his most personal work by far, 10 years in the making, a memoir about his remarkable life, “War and Revolution in South China: The Story of a Transnational Biracial Family, 1936-1951” (Hong Kong University Press, 2021), which recounts, among other things, how he and his family became war refugees four different times. As one reviewer wrote, “Rhoads has produced a rare study that is both scholarly and accessible.”

Rhoads' father, Howard, was a University of Pennsylvania graduate who taught English at Lingnan University in Canton, China, in 1936. (During the Great Depression it was extremely difficult to find such a job in the U.S.) In 1937, he married Ngan Chi-Kiy, an English-speaking Chinese woman who was the secretary to the head of an American foundation, and Edward Rhoads was born the following year. Rhoads’ mom was one of 18 children her father had with four wives.

“My first language was Cantonese,” Rhoads said. “We moved around a lot. The Japanese and Chinese were at war in the north, so we had to flee. In 1938, the Japanese captured Canton, so we had to flee again, this time to Hong Kong. The university where my parents worked had to relocate to Hong Kong. Then the Japanese attacked Hong Kong, and my dad was put in an internment camp for six months. In mid-1942, he was released as part of an exchange of captured civilians.”

After his release from captivity, Rhoads' father came back to Philly, while Edward and his mother fled into the interior of China (“Free China”) in 1942.  His father returned to China in 1943, reconnecting with his wife and son. The school he taught at was revived, so he resumed teaching there, but a year later the Japanese launched a major offensive, and the Rhoads family had to flee for a third time, this time to Chongqing, provisional capital of China at the time.

In 1945, the family returned to South China, where Ed's father revived the university, and Ed's sister, Janet, was born. (She is now a librarian and musicologist in New York.) There were no big changes for the Rhoads family after the Communist takeover of China in 1949 until the Chinese intervened in the Korean War in 1950 and the U.S. Army marched north towards China. Foreigners were forced to stay in their homes and could not work anymore.

“University trustees in New York said it's time to go,” Rhoads said. “We were among the last to leave in the fall of 1951. It was the fourth time we had to flee because of war.”

Rhoads admits that his memory about his early years was very foggy before he started his research.

“Though I have always been interested in and curious about my Chinese past, I, like many children, was never interested nor curious enough to interrogate my parents, and my parents themselves hardly ever talked about their past, either. My younger sister and I were never told, for example, that my mother had been divorced before she married my father. As a recent family historian wrote, 'Maybe all fathers [and mothers too] are unknowable. Maybe all families are mysterious. If we’re lucky, we get interested in ours before it’s too late. Memories silt over, and lives are cut short. By the time we’ve come up with the questions, there’s no one left to answer.'”

After graduation from Harvard, Rhoads became a researcher and history professor, winding up at the University of Texas in Austin for 36 years, retiring in 2003. His wife, Patricia Stranahan, who earned a doctorate in Chinese history from the University of Pennsylvania, taught at Springside School at one point and later became a provost at Hobart/Smith College. “I followed her to Philadelphia, where she had friends,” Rhoads said.

About 15 years ago, long after the death of both of his parents (his mom died in 1966 in her mid-50s, and his dad died in 1984 at 84) and following his retirement from teaching, Rhoads set out more systematically to learn about his family's lives in China. He was helped greatly by the archives at Lingnan University as well as at Yale and Harvard Universities.

“I learned that my grandfather was a wealthy silk merchant and that I still have relatives in Hong Kong,” he said. “One relative had 40 children. A cousin took me to our ancestral village in 2016. I found family photos in the archives. Our house is still there. We had servants and a good life. My mom never cooked dinner before coming to the US. The servants did it. As an adult I had put all of this out of my mind.”

For more information, visit hkupress.hku.hk. “War and Revolution in South China: The Story of a Transnational Biracial Family, 1936-1951” is also available on Kindle. Len Lear can be reached at lenlear@chestnuthilllocal.com