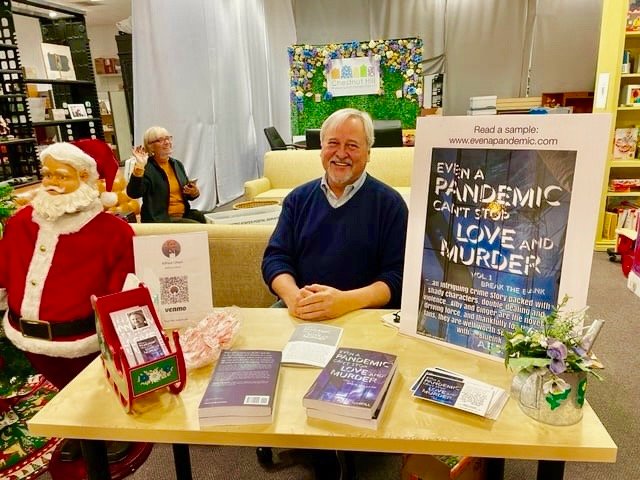 Chestnut Hill author Alfred O'Neill is seen on the Dec. 8 Stag & Doe Night at the Chestnut Hill Visitors Center, 8514 Germantown Ave., signing copies of his new novel based on real life, "Even A Pandemic Can't Stop Love and Murder.”
Posted Friday, January 14, 2022 6:00 am
by Len Lear

Based on a true story, Chestnut Hill author Alfred O'Neill Jr. has just written “…an intriguing crime story packed with shady characters, double-dealing and violence … Alby and Ginger are the novel’s driving force, and thankfully for thriller fans, they are well worth spending time with.”

This is a typical review on the book review website BlueInk of “Even a Pandemic Can’t Stop Love and Murder,” the first novel of a trilogy which was released in October. (There have been eight reviews on amazon.com, all five stars.)

O’Neill, who grew up in Chestnut Hill and came back here to live 12 years ago, was an advertising agency executive for 30 years and is now semi-retired. He based the book on his late father, also named Alfred O'Neill, who led a checkered life that included a three-to-five-year stretch in Allenwood Federal Prison for money laundering.

“My father was the ninth child in an Irish Catholic immigrant family from County Derry,” O'Neill said in a Zoom interview last week. While in prison, the elder O’Neill’s roommate was John Phillips - the hugely successful songwriter and lead singer of the 1960s' soft rock quartet, The Mamas and the Papas.

Told to him by his father years ago, the plot of O'Neill's new book centers on a robbery at a mob-owned bank and the violent consequences that followed. From a childhood that he says was marked by wiretaps, mob dinners and FBI agents following his father, O’Neill learned to understand the complexities of love, crime and human behavior.

Inspired by the snappy dialogue of 1930s' talkies and the ever-present danger of the Pandemic Era, O'Neill uses this true story to show what he believes are the major themes in human behavior, the choices we make and the consequences we have to live with.

Growing up in Chestnut Hill, O'Neill said he was very fortunate to receive a private school education at Penn Charter, which he called “a wonderful school.” He then proceeded to earn degrees in creative writing and film production at the University of Arizona, which he followed with a masters degree in communications from Stanford University in 1983.

“But I then avoided the film industry like the plague,” he said. “I thought I'd lose my mortal soul if I worked in it.” Instead, O'Neill worked in advertising in San Francisco for five years, then moved to New York, where his wife was from.

For the past 12 years he has lived back in Chestnut Hill, often traveling back and forth to Princeton and New York City, semi-retired but balancing consulting projects and writing. For seven years O'Neill and his late second wife, Nadine Caputo, also had a blog, theoutspokentraveler.com.

“She would say, 'If you love the story (of the family) so much, why don't you write a book about it?' he said. “Nadine died of cancer on April 10, 2020, 11 years to the day that we met along Forbidden Drive. Then I started right away to write the book.”

As a child, O’Neill said he was exposed to one kind of world through his Irish mother and grandmother, which he experienced as a straightforward one in which you followed the rules. And then there was his father’s world, which he describes as dark, mercenary and loyal.

“Dad's advice was: Never put your back to the door; know how to fool a lie detector test; know how to know when someone is following you,” O’Neill said. “But dad also sent me to Penn Charter so I would be around 'the best people.' He told me to stay close to them.”

After working on the west coast and then in New York as an advertising executive, O'Neill returned to Philadelphia in 2009 to attend the funeral of his stepfather, Larry Murdoch, whom he describes as “a wonderful man.” It was at Murdoch’s graveside that Alfred received “a surprise phone call from a recruiter offering me a great job in Philly. The universe called. So I came home to Chestnut Hill.”

O'Neill's mother, Dr. Eleanor Murdoch, was a clinical psychologist and “a great person who seemed to know everyone in Chestnut Hill,” O’Neill said. Murdoch held a Ph.D in child development from Bryn Mawr College, worked for Catholic Social Services for 20 years and was on the boards of the Chestnut Hill Community Association and the Senior Center. She died from complications of Covid-19 on Nov. 11, 2020.

“My mother was so wonderful,” said O'Neill, who added that it was always harder for him to reconcile all the parts of his father’s life.

“If anyone asked what he did, I said he sold life insurance, which he really did do in a way,” O’Neill said. “In one case, he backdated a policy so a man could collect $1 million, even though the insurance was not really purchased until after the policyholder had died.”

But there were also ways in which he was a very loving and supportive parent.

“My father was a wonderful man who insisted that culture and intellect were so important, he sent us to Europe each year for the summer to live,” said O’Neill. “He was a complex man, damaged but full of love.”

And, also, a source of humor.

“My future wife was once asked what her fiance's father did,” O’Neill said. “She said, 'Three to five years.'”

There will be two more volumes in O'Neill's “Even a Pandemic” series, “Paying the Price” and “Checking Out.” For more information, visit evenapandemic.com. Len Lear can be reached at lenlear@chestnuthilllocal.com