A week after an early morning fire broke out in the heart of Chestnut Hill’s business district, destroying the historic Hiram Lodge, a representative for the owner said the group plans to rebuild. 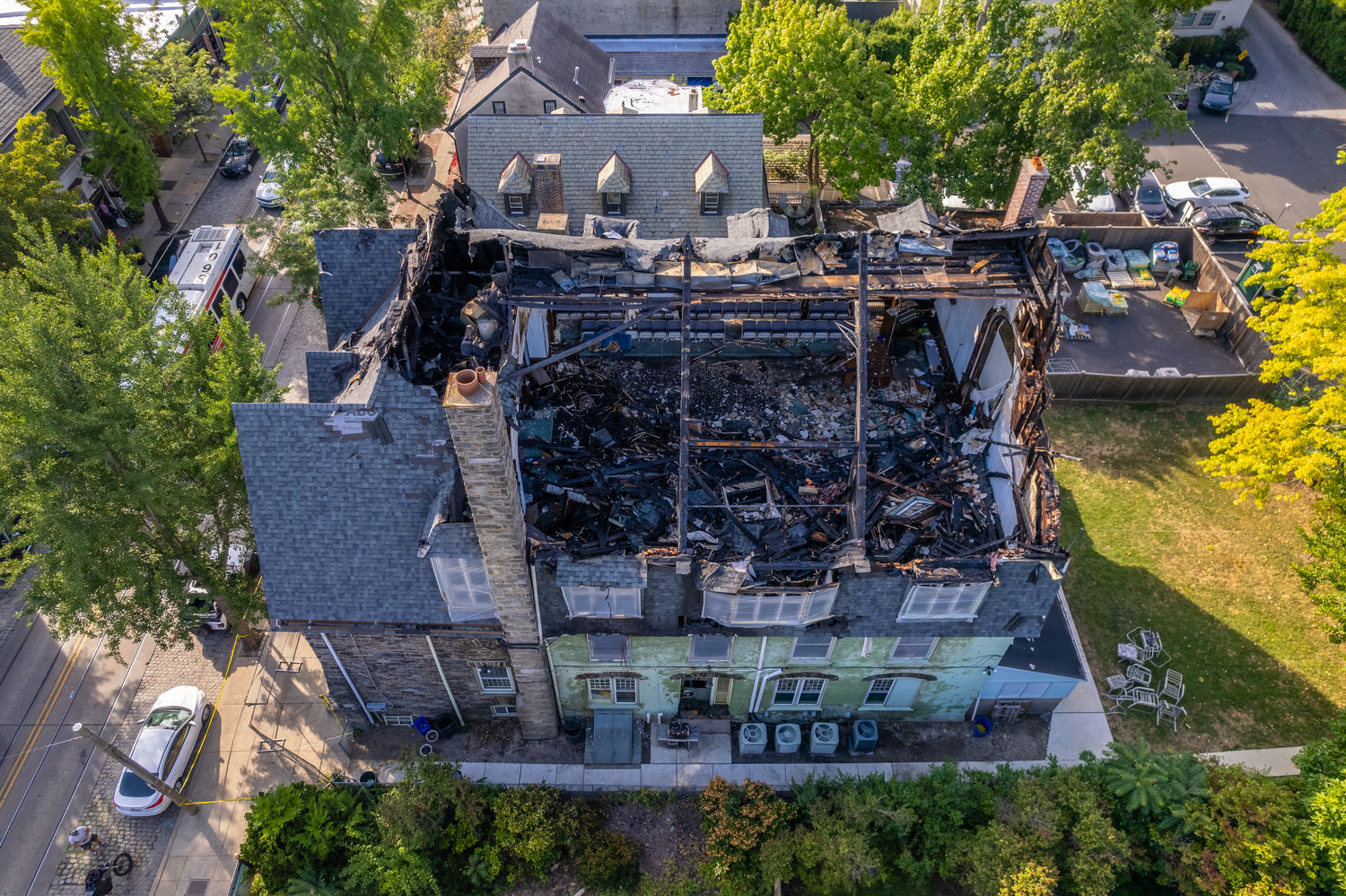 The fire that ripped through the Hiram Lodge in the early hours of Tuesday morning last week destroyed the entire third floor, including an ornate and original meeting hall.
Photo courtesy of Michael Sivel, Realtor at Berkshire Hathaway HomeServices. 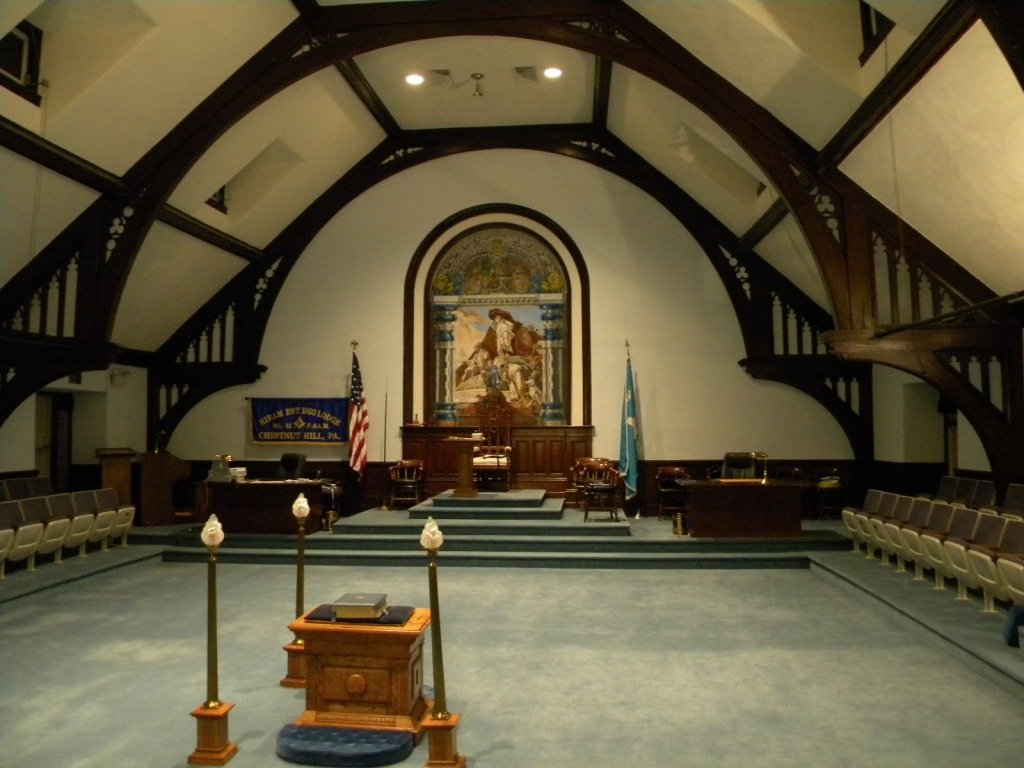 Prior to the fire, the third floor interior of the historic lodge was intact and original.
Photo courtesy of Hiram Lodge 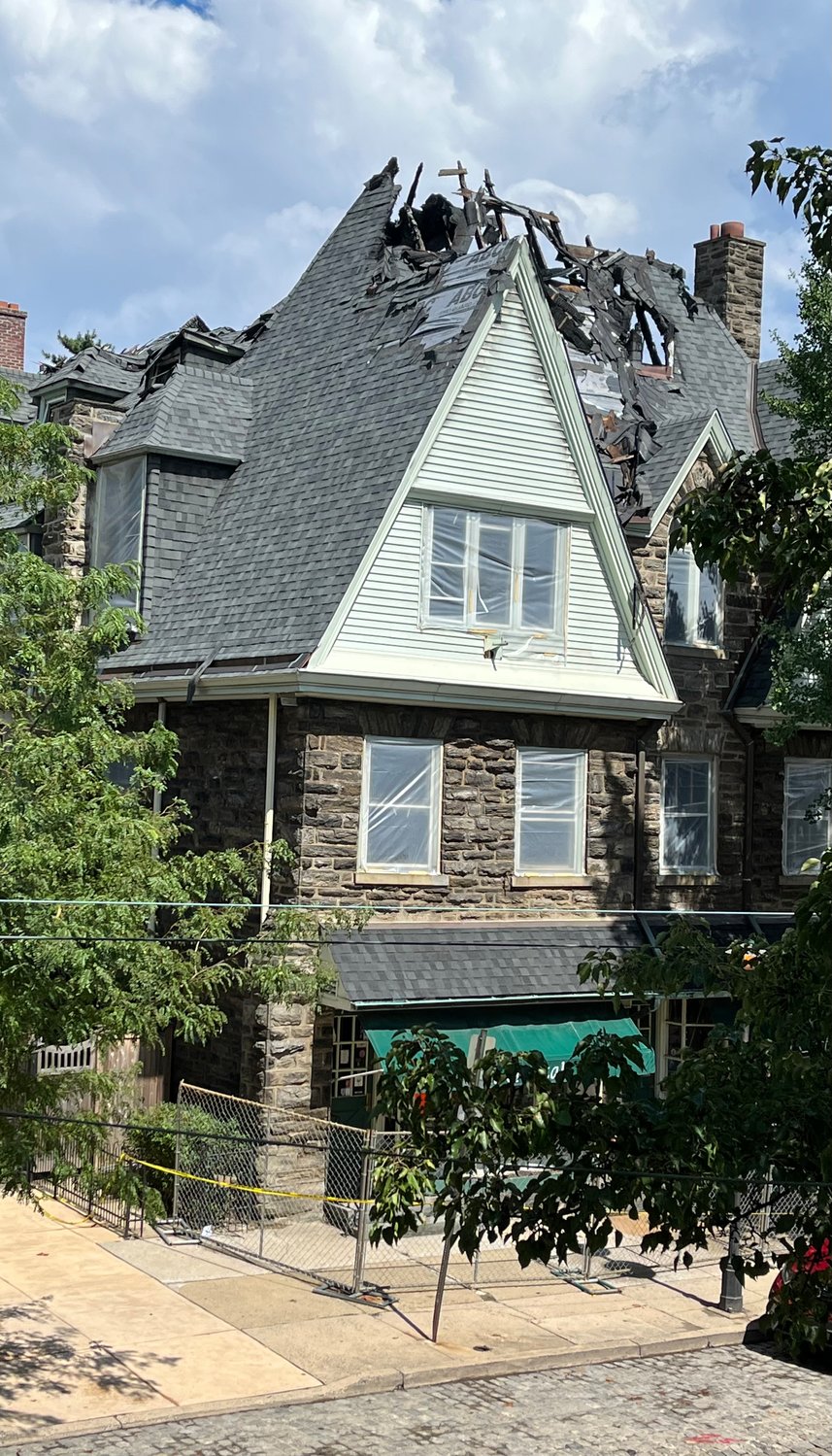 The burned building has been designated as imminently dangerous by the city’s Department of Licenses and inspections.
Photo by Carla Robinson
Previous Next
Posted Wednesday, August 24, 2022 12:00 am
by Carla Robinson

A week after an early morning fire broke out in the heart of Chestnut Hill’s business district, destroying the historic Hiram Lodge, a representative for the owner said the group plans to rebuild.

“Yes, we plan on rebuilding,” Josh McKnight, a lodge member and spokesman for the group wrote in an email to the Local. “We loved our building. We love Chestnut Hill and the community. And our prayer is that we will be able to keep things moving in the right direction and have use of our building again.

They hope to come up with a game plan in the next few weeks, he said.

“We are working with our insurance company to determine a plan of action,” McKnight said. “We still have a great deal of preliminary work to determine how much of the building can be saved, so we’re not sure if it's a restore or a complete rebuild.”

The property has now been labeled imminently dangerous by the city's department of Licenses and Inspections. According to city spokesman Kevin Lessard, the exterior wall is fractured and the 2nd floor joists are damaged in addition to the whole third floor and roof having been destroyed.

According to a spokeswoman for the city, the investigation into what caused the blaze is likely to take several weeks. McKnight said the Bureau of Alcohol, Tobacco, Firearms and Explosives has ruled out foul play.

Complicating the investigation is that the electricity is still on, and the basement is full of water - making it dangerous for anyone to enter.

According to McKnight, that’s because the lines are buried underneath the sidewalk, which may have to be dug up before anyone can turn off the power.

“I was told that the lines were run underground years ago for that building so they wouldn't interfere with the trolley,” McKnight said. “PECO was notified on Tuesday morning when the fire took place….It is our hope that PECO will be out over the next few days.”

In addition to serving as a headquarters for both the Chestnut Hill and the Jenkintown lodges, which merged two years ago, the building also houses El Quetzal, a boutique store, and a ground floor apartment at the rear.

“For the time being, we will need to find a temporary space to meet,” McKnight said.

According to Fire Marshal Dennis Merrigan, the fire was first reported at 3:07 a.m. on Tuesday and was declared under control by 6:12 a.m., although firefighters were still on the scene and hosing down the building until late afternoon. The roof collapsed at about 7 a.m. as firefighters shot water into that area of the structure.

Firefighters left the scene later that afternoon, but had to return again around 10 p.m. because flames had reignited. They remained on site until about 3 a.m. Wednesday.

No one was injured, Merrigan said.

Whatever caused the fire, the flames consumed the building very quickly, according to Carrie Slagle, a nurse who works at Chestnut Hill Hospital and lives two doors away from the burned building. She was the first to call 911 - at exactly 3:08 a,m,Tuesday morning.

She had just gotten home from her night shift when she pulled into her usual parking spot behind the building, she said.

“As soon as I got out of the car, I heard this loud ringing, that sounded like a security alarm going off,” she said. “At first, I thought maybe there was a break-in happening, and it was a little bit scary because I was the only person out there at that time of night. So I turned around to look and that’s when I noticed that the whole side of the building was lit up with orange flames.

“That orange color was not there when I first drove into the parking lot, and the alarm wasn’t going off either,” she continued. “So that’s how fast that fire got so bad - it was just the time it took for me to park my car and get out of it.”

It was a terrible feeling, she said, watching a huge building like that go up in flames.

“You feel so helpless, staring up at all those orange flames, knowing there’s nothing you can do,” she said.

The tenant who lived in the building’s rear apartment, who gave only her first name of Leslie, said she feels lucky to have gotten out of the building when she did.

“I was asleep on the second floor when I woke up to a strong smell - it smelled like a mix of some kind of chemical and faint smoke,” Leslie said. “My alarms didn’t go off, but still I felt uneasy about it so I quickly got up, threw on my jeans and a T-shirt, grabbed my purse and went outside.

When she turned around and looked behind her, she said, there were flames coming out of the lodge side of the building.

“That was such a scary feeling,” she said. “I’m a really deep sleeper. I can’t believe I woke up.”

Lori Salganicoff, executive director of the Chestnut Hill Conservancy, said she and her board members remain hopeful that the building will be restored. “There are resources that we could bring, and ways we could help - and we look forward to doing so,” she said.

“This building is a significant part of our historic community, and of our 'Main Street' on Germantown Avenue,” she continued. “We are especially interested in working to preserve the masonry front, which seems to have withstood this unfortunate event.  This seems appropriate, I think, given that the building is owned by Masons.”

Meanwhile, friends and neighbors of the people who lived and worked in that building have been doing all they can to help during what they describe as “an incredibly emotional week.”

Ron Pete, owner of the Chestnut Hill Hotel, came out in the early morning hours when the fire was raging to offer Leslie a room, where she is now staying. Members of the Venetian Club started a GoFundMe page, which has now raised more than $9,000.

“Everyone is wrapping around her,” said Beth Milley, owner of Villavillekula, the children’s boutique located in the building next door. “Yesterday I saw Voltaire (owner of Styles by Blaine) bring her two beautifully-wrapped bags of clothing. Many of my own customers ask how they can help, which fills me right up.  This is really how the community works.”

And she’s incredibly grateful - for that as well as all the other help she’s gotten.

She plans to start looking for another apartment here in Chestnut Hill. “I’ve lived in that same apartment for the past 16 years,” she said. “Chestnut Hill feels like home to me.”

According to Salganicoff, the local preservationists put a high value on the building, which is listed on the National Register of Historic Places as a “contributing” building. It was built in 1889 and designed by architect George Pearson.