“The older one is David … I can’t remember the other one’s name.”

Azariah John Faith and his family, of Harrisburg, stayed in a local apartment thanks to Hosts for Hospitals. “Thank God for Hosts for Hospitals,” said mom, Savanna. “Azariah got the absolute best care in the Children's Hospital (of Philadelphia) Cardiac Care Unit.” 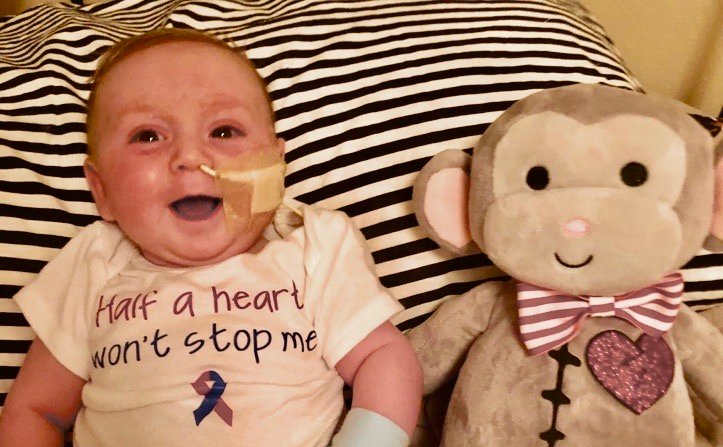 Children receive medical care in Philadelphia hospitals and other facilities, while some of their parents and siblings stay with volunteer families in Northwest Philadelphia. Photos courtesy of Hosts for Hospitals
Previous Next
Posted Tuesday, April 12, 2022 12:01 pm
by Len Lear

One evening in 1988, Michael Aichenbaum returned home from work totally fatigued and staring at his two sons, 2½-year-old David and 8-month-old Josh. Deeply depressed, Michael finally mumbled to his wife, Ruth, “The older one is David … I can’t remember the other one’s name.”

The next day Michael Aichenbaum, then 33, was diagnosed with an advanced case of leukemia. Doctors told the Aichenbaums that two courses of chemotherapy could be administered. If the disease was not brought into remission, the doctors said, there would be nothing else that could be done.

The courses of chemotherapy failed. Then Michael Aichenbaum was transferred to Memorial Sloan Kettering Cancer Center in Manhattan, where he did eventually recover - living through an experience that led him to found a Philadelphia organization that has been helping families like his for more than 22 years.

While his story is dramatic, it turns out it’s not that uncommon. Aichenbaum was at Sloan Kettering for almost six months, from New Year’s Day through mid-June. The new chemotherapy he received brought the disease into remission, and he successfully received a bone marrow transplant from his brother in 1989.

During this time, his family stayed in an apartment across the street from the hospital - a circumstance which cost them tens of thousands in rent money - more than $45,000 measured in today’s dollars. Not exactly what a family in crisis needs to have to spend.

Aichenbaum then met Nancy Wimmer, another Philadephian whose family had been forced to come up with a large sum to pay for lodging when she was diagnosed with non-Hodgkin's lymphoma in 1988, and had to travel out of state for treatment.

So when Aichenbaum learned about the Boston-based Hospitality Homes, a nonprofit organization which has been organizing a network of volunteers to host hospital families in their homes - for zero or very low cost - since 1983, he thought of Wimmer.

He reached out, and told her that he was thinking of establishing a similar program here in Philadelphia. She thought it was a great idea. Not only that, she told him, she’d help him do it.

Together, in March of 2000, they established the nonprofit Hosts for Hospitals (HfH), which provides volunteer homes for patients whose loved ones come to a Philadelphia medical facility for major medical treatment. The group now numbers 50 to 75 active hosts, 20 of whom are in Northwest Philly. The average stay is one week.

“So many come here for medical procedures because the hospitals and other medical facilities in Philadelphia are superior to those in their hometowns,” said Cathy Davis, a 20-year West Mt. Airy resident and HfH outreach coordinator. “I personally host about five families a year. I'd like to do more, but I have two kids in college who come and go.”

Some families host much more often, she said. One even hosted a family for an entire year. And they come for all kinds of reasons. One family, for instance, needed to be hosted long term because their son, a patient at the Shriners Children’s Philadelphia, lost part of his leg when a bomb went off.

“One host who had a very big house had two families in there at the same time,” Davis said. “We appreciate all of them, no matter how often they do it.”

Debbie and George Stern, who host families in their Mt. Airy home, said they feel like they get as much as they give - and have gotten to know people from all over the country.

The Sterns are still in contact with a family from Ukraine who came to Philadelphia seeking help for their daughter, who has a developmental disability. “We're happy to report that they are now safely ensconced in Paris as the war rages on,” George Stern said.

Gerry and Carey Davis (no relation to Cathy Davis), have been hosting families for years in their Mt. Airy home. (Carey is the former director of Chestnut Hill Meals on Wheels, and Gerry is a family therapist.)

“We took our first guests, a mom and young daughter, to our seven-year-old’s baseball game - and our son is now a pitcher in college!” Carey Davis said recently.

While some guests have stayed in touch, she continued, most were in their lives for just the short time they were guests.

“We are grateful to have had a small role in their life stories and honored to have them in ours,” Carey Davis said. “Through our participation with HfH, our children gained a deeper, more tangible understanding that what we have been given is to be shared, whether it is a bed, a cup of tea, a listening ear or a prayer, sometimes many prayers, or even a spot on the bleachers.”

In addition to her HfH hosting for 15 years and coordinating for five years, Cathy Davis has been a real estate agent at Elfant Wissahickon for more than 20 years. She is also a former outreach coordinator for St. Paul's Episcopal Church in Chestnut Hill. Her husband, a Roxborough native, is now a teacher but ran the Chestnut Hill newsstand (now vacant) for five years, more than 10 years ago.

To become a HfH host family, visit hostsforhospitals.org. Len Lear can be reached at lenlear@chestnuthilllocal.com.