In soccer playoffs, one of six area teams still standing

In soccer playoffs, one of six area teams still standing 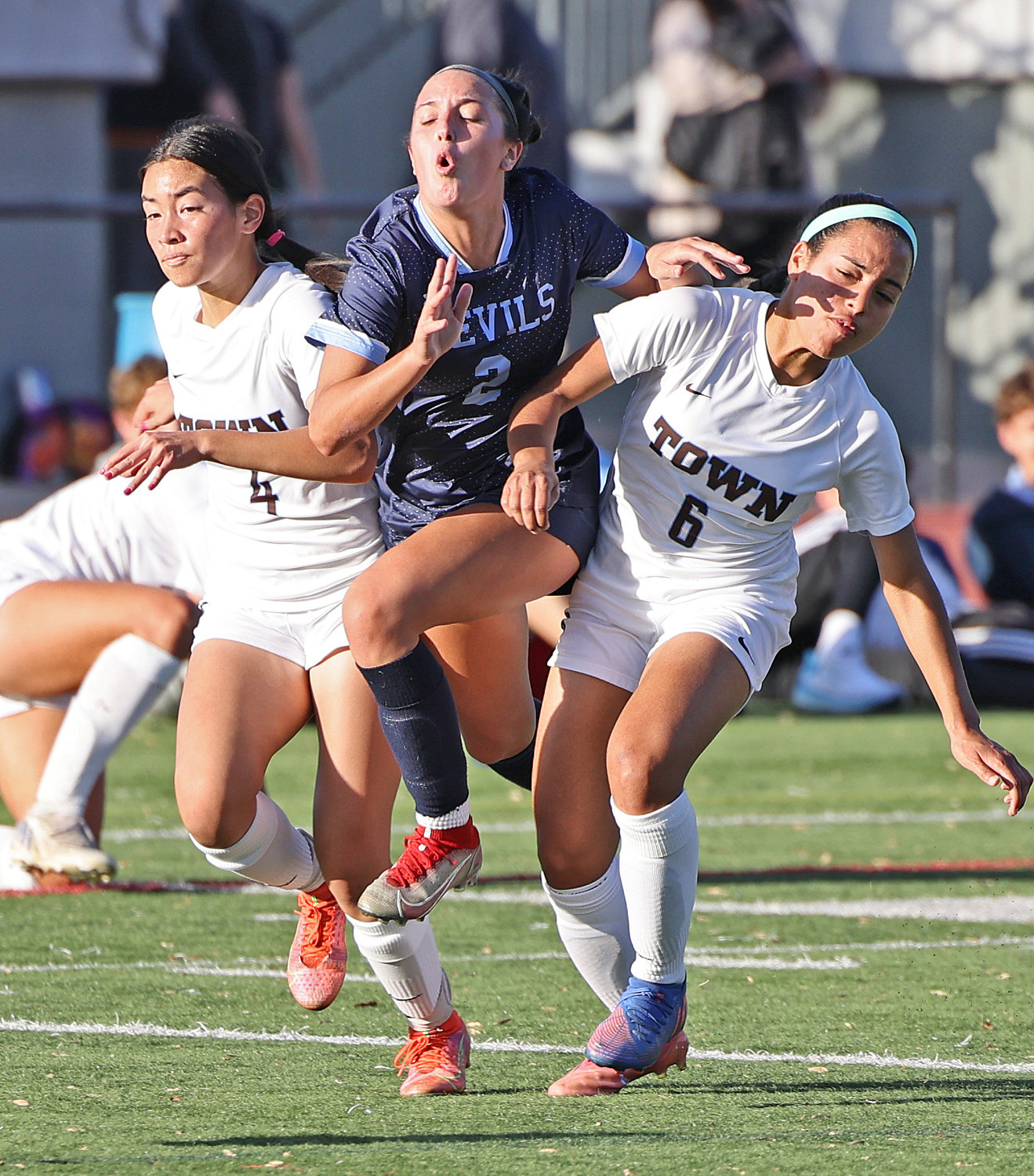 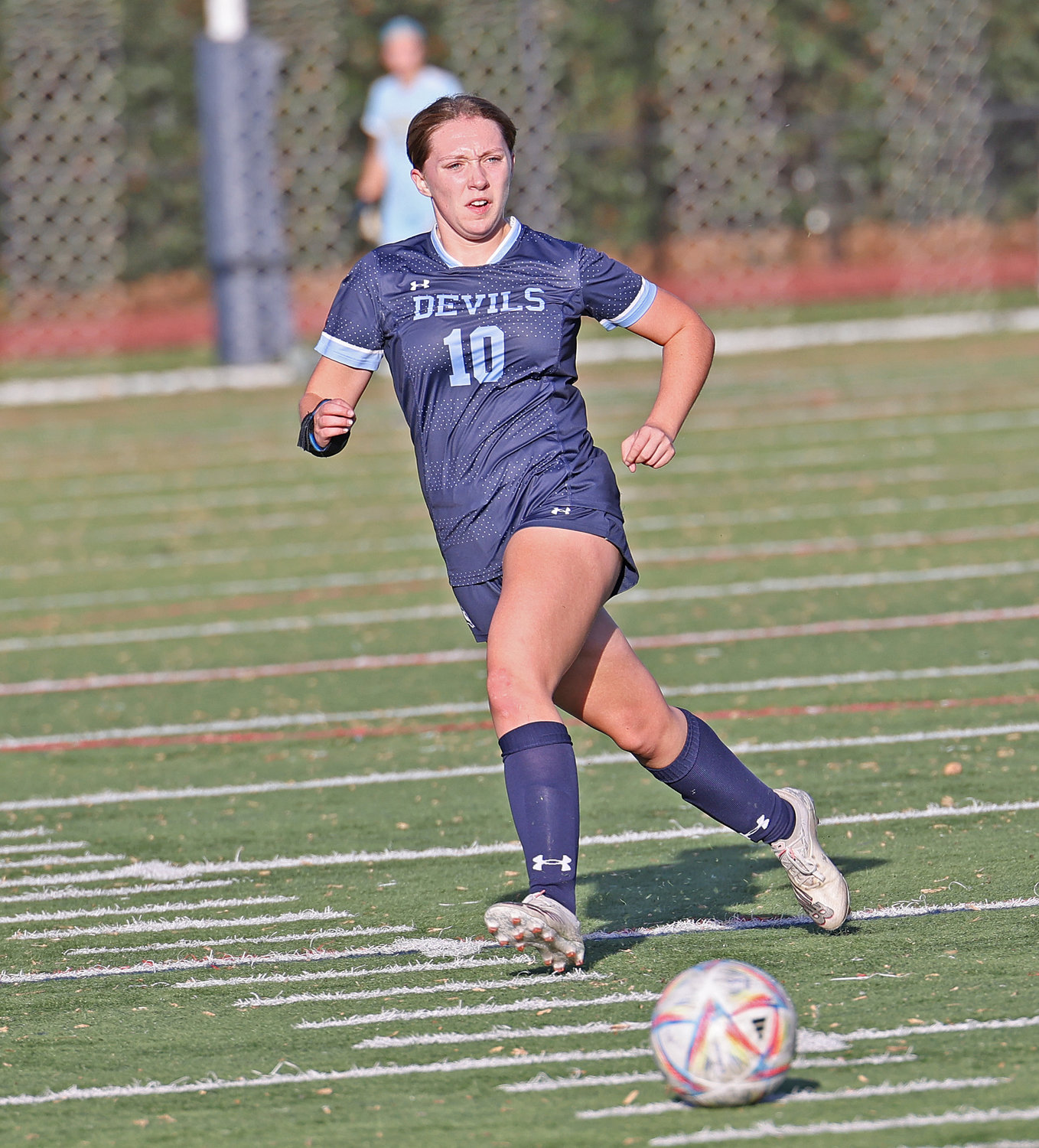 SCH senior Brigid McDonald tracks down a loose ball before a Westtown player can reach it.
Photo by Tom Utescher
Previous Next
Posted Wednesday, November 16, 2022 12:00 am
by Tom Utescher

A few hours later, most of them were pulling off their jerseys for the last time this year. All of the boys' teams, as well as the GA girls, suffered losses in the single-elimination playoffs.

The highest seeded boys' team from the area, fifth-ranked Germantown Academy, was edged out on Tuesday, 2-1, by fourth-seeded Haverford School, the 2022 league champ. In 2021, GA won the league title and was the runner-up in the PAIS tourney. The Patriots advanced to last Tuesday's quarter finals thanks to a 6-0 win in a first-round game with Mercersburg Academy, the 12 seed.

For this year's Indy tournament, Penn Charter and SCH were positioned ninth and 10th, respectively, on the seeding chart. In the first round, Charter knocked out number eight Westtown School, 1-0, while SCH also overcame a higher seed as it topped seventh-seeded Episcopal Academy, 2-1. Last Tuesday, the PC Quakers reached the end of the road with an 8-2 loss to the top seed, defending PAIS champion Kiski School of Pittsburgh. The same afternoon, the Hillers of SCH went all the way to penalty kicks before yielding to second-seeded Shipley School. Shipley is the 2022 Friends Schools League champion; the Gators got by Germantown Friends, 1-0, in the FSL championship game.

Although they play in different leagues, the girls of SCH and Westtown have a good bit of common history in the Indy Schools tournament. In the Blue Devils' first appearance in the finals in 2016, they lost to the Moose. The following year, they dispatched Westtown in the semifinals before going on to win their first PAIS championship.

In 2019, Springside made a clean sweep through the Inter-Ac to win its first title in the league, but then fell to the Moose in the semifinals of the postseason tourney. COVID scotched the 2020 tourney, and in 2021 SCH won the title while Westtown did not participate in the tournament.

Last Thursday it quickly became evident that the Moose, the 2022 Friends Schools League champions, had two speedy sisters who would have to be watched on the wings. Overall, the Blue Devils did a good job of containing the Westtown offense, and spent much of the time on the attack themselves. The visitors earned a corner kick two minutes into the game, but the served ball sailed over everyone in the box.

After an unchallenging SCH shot took a low bounce to Westtown goalie Lucy Smith, a more serious assault near the left post by senior Bella Brown resulted in a save and a Blue Devils corner. The kick found a head inside, but the ball continued out of the box, parallel to the goal line.

Eight minutes in, the Devils had no one in place to take advantage of a good cross by senior Abby Kenkelen, and soon after that Westtown's Smith made a diving save on a shot from the right by Springside senior Lisa McIntyre.

On an SCH corner kick about a dozen minutes in, the ball got behind Smith and was rolling close to the goal line from left to right. A defender for the Moose was able to clear the ball out just in time.

As the middle of the period neared, three consecutive corners for the hosts didn't produce a goal. On the third, the ball got to McIntyre high in the box, but she had a defender glued to her and only got off a fairly soft shot to Smith.

The Blue Devils continued to push into the attacking third. Senior Mary Trudeau came up the field to win several head balls near the 18, but no serious scoring chances resulted.

The period ended with the score still 0-0, which, the Devils were reminded in their huddle, was not a good outcome. It left them open to having one flukey attack and goal by the visitors potentially deciding the result of the match.

One thing in the Devils' favor was that in the second half, they would be attacking with the late afternoon sun at their backs.

Just 90 seconds in, senior Brigid McDonald made a good cross from the right side. The ball contacted two heads in the box, but neither angled it toward the goal cage. Brown slanted through the box from high left to low right, firing a shot that was saved near the right post. Five minutes in, a corner kick sent the ball through the box in the air without a touch inside.

Soon after that Brown rushed the left post and centered the ball, but junior Brynn Donohue's shot went over the crossbar. It almost seemed as if some kind of Sci-Fi repeller beam was diverting Blue Devil shots around and over the goal.

"You couldn't make this up!" exclaimed SCH head coach Maria Kosmin after another ball avoided the cage on an open shot.

Westtown had an opportunity on offense a little later with a long direct kick, but the ball was caught in the air by senior goalie Ellie Stratz. Stratz usually splits halves in the SCH goal with sophomore Gracyn Lee-Torchiana, but the 10th grader was out sick that day and the senior played the whole way for the shutout.

The Devils resumed their assault, and one shot by McIntyre went over the crossbar and another missed at the top right corner. With 27 minutes left the senior was tripped and the restart netted a shot wide to the left.

A long shot from the right by Kenkelen was saved for the Moose by Smith, and then Brown settled the ball in the left side of the box and shot it above the cage. Trudeau missed a shot wide to the left, then another direct kick was fired in the air to Smith just past the middle of the second half.

Finally, the Blue Devils and their fans got what they'd been waiting for.

Dribbling near the top left corner of the box, Brown freed herself for a shot and drove the ball on the ground inside of the right post. The game's lone goal was on the board with 17:14 remaining.

The Moose moved a second forward up front, and at the other end their goalie, Smith, had to scramble to catch a well-struck cross by Blue Devils junior Abby Udowenko. Her classmate Alex Reilly hit the right post of the visitors' goal a few minutes later, then a shot by McIntyre was saved and one by Trudeau rose over the goal.

After an SCH corner kick played short on the ground with half-a-minute to go, the contest concluded and the Blue Devils were headed back to the finals. The two regular-season matches between SCH and Episcopal this fall resulted in an overtime win by the Blue Devils and a 1-1 tie.