Lollipop lambchops at IndeBlue. by Len Lear I cannot tell you how many people over the years have told me that they do not eat at Indian restaurants because the food is “too spicy.” This … 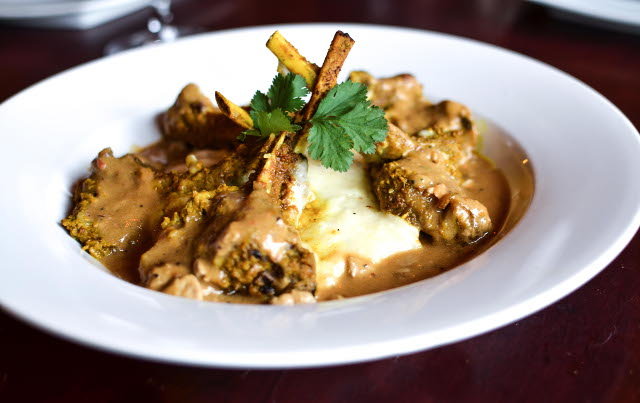 I cannot tell you how many people over the years have told me that they do not eat at Indian restaurants because the food is “too spicy.” This self-defeating attitude would have come as a surprise to Marco Polo and the countless other explorers who risked their lives (and often lost their lives), their health and their sanity to take the treacherous months-long or years-long journey from Europe to India over the centuries to bring back those very same spices — chilies, cardamom, garlic, coriander, ginger, cumin, curry, turmeric, black mustard seed, cinnamon, clove, saffron, nutmeg, et al.

In fact, the spice trade between India and Europe is often cited by historians as the primary catalyst for Europe's Age of Discovery. Spices were bought from India and traded around Europe and Asia. They have also influenced other cuisines across the world, especially those from the Middle East, North Africa, Southeast Asia, the British Isles and the Caribbean. Indian cuisine reflects a 5,000-year history of various groups and cultures interacting with the subcontinent, leading to diversity of flavors and regional cuisines found in modern-day India. It might just be the most diverse cuisine in the world.

All of this brings me to IndeBlue at 205 S. 13th St. In Center City, which just might be the finest Indian restaurant in the Delaware Valley. “Many Americans think that Indian food is spicy, greasy and heavy and that you have to take a nap after eating it,” owner/chef Rakesh Ramola said in an earlier interview. “This is not true. Indian food is very healthy. Many of the ingredients come from trees — bark, stems and roots. Things like garlic, turmeric and ginger. It is colorful, natural, very healthy and full of flavor.”

Another notion many people have about Indian restaurants is that they are no-frills, bare bones operations with stoic servers and all-you-can-eat buffets that pretty much make you want to get in and out as quickly as possible. IndeBlue is just the opposite of that stereotype.

IndeBlue, which is just a couple of blocks from the Academy of Music, Kimmel Center and other theaters, has a gorgeous 1,600-square-foot dining room with a marble top bar, lots of bronze elements, dimly lit hanging lights and recessed lighting, dark walls, hardwood tables and floors, Indian artifacts on the walls and seating for about 70 as well as a 12-seat chef’s table.

Chef Ramola's menu is full of classics and some contemporary Indian dishes. An appetizer called crispy spinach chaat ($8) is catnip to regular customers. The dehydrated spinach is zephyr-light and gossamer-thin, crunchy and full of ambrosial flavor, enhanced by shallots, chopped tomatoes and sweet yogurt. It has often been said that laughter is the best medicine but only when you cannot get your hands on this dish.

You really cannot go wrong with anything on the menu at IndeBlue. Some other dishes we thoroughly enjoyed were the duo hummus served with fresh vegetables and garlic naan ($10); moilee (jumbo lump crab, shrimp and coconut with spices and lemon cashew rice, $25) and tandoori mixed grille (several meats with mojito wine and two kinds of chutney, $26). You might say that IndeBlue is raising the steaks because there are no steaks on the menu, possibly because cows are sacred in India. (Maybe this should be reported to the U.S. Steak Department.)

I made the mistake of ordering a Sauvignon Blanc, which normally goes well with Asian food but which was overwhelmed by the spices. (I made the same mistake the last time we visited IndeBlue. I am a slow learner.) Beer is definitely good for what ales you when you go to IndeBlue as well as the excellent Chai sangria ($8), sweetened with orange liqueur and brandy, or the Bengali Kiss ($10) with rum, blood orange, ginger and lemon. 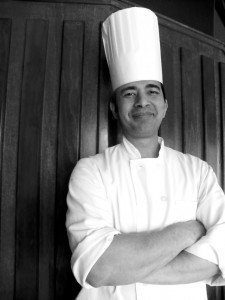 Rakesh Ramola, owner/chef at IndeBlue, may just be the top Indian chef in the Delaware Valley.

After a dinner like this, something cool and fruity is just what the doctor ordered, such as the mango apricot sorbet ($8) or banana balls with salted caramel ice cream ($8).

One popular option at IndeBlue is the chef’s tasting, which includes a bread basket (Indian bread may be the best in the world), two appetizers, one tandoori small plate, two entrees and a dessert tasting for $39 per person.

Our delightful, knowledgeable server, Shane, whose parents came to the U.S. from Turkey, said she rides to work from South Philly on a bicycle, so you might say that she is a cycloanalyst.

In 1993 there was a popular song by Brooks and Dunn called “Hard Workin’ Man,” which contained this line: “The only way to keep the fire going is to outrun the wind.” I would say that Rakesh Ramola has definitely kept his culinary fire going by outrunning the winds of trendiness. His menu does not change four times a year, but it does not have to. With flavor explosions like these, you would want to come back time and again. There are chefs whose names appear a lot more in the press and on the internet, but it is definitely time for chef Ramola’s turn at bat in the limelight.

Parking can be a hassle in center city, of course, but IndeBlue has an arrangement with the Holiday Inn, on the north side of Walnut Street, between 13th and Juniper, just one block from IndeBlue. With a ticket that is stamped at the restaurant, parking is just $10.