Ron Bryant was born in Philadelphia and spent his youth in and out of foster homes. He tended to run away when foster parents became too protective of him due to his visual impairment. Despite his deteriorating eyesight, he always prioritized freedom of movement. 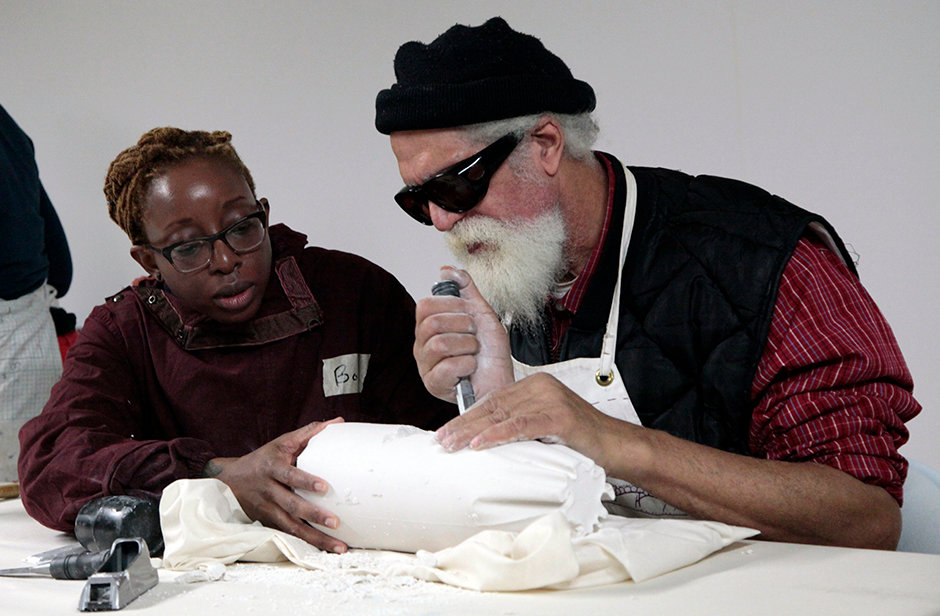 An art center volunteer and blind ceramics artist Ron Bryant, whose works will be on display in the lobby of Allens Lane Art Center starting Jan. 8. 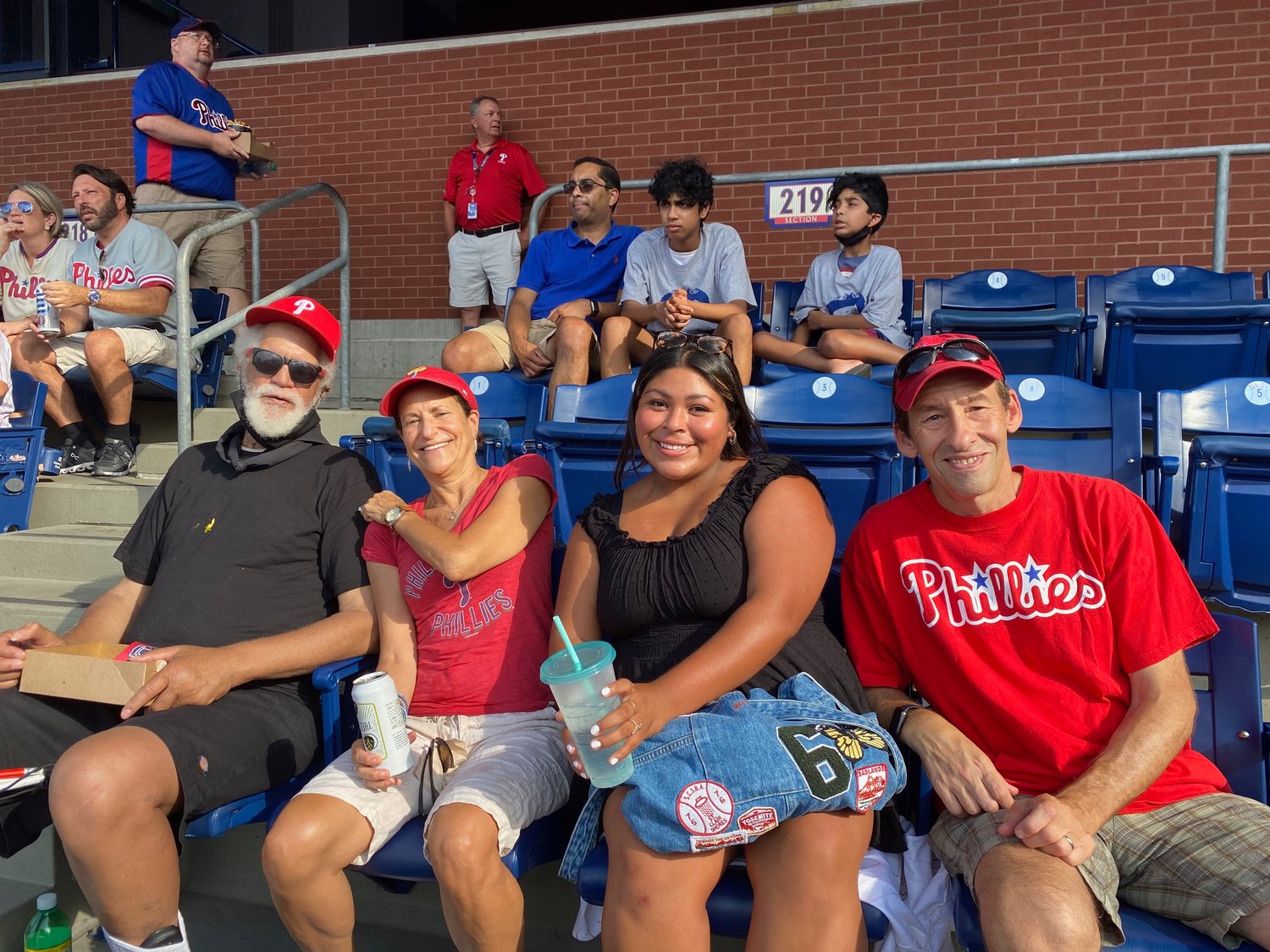 Ron Bryant (left) accompanied the Cohen family of Mt. Airy to a Phillies game in August of this year. The Phillies won, which Ron attributed to his presence. Next to Ron are (from left) Amy Cohen, daughter Chloe and husband Michael. Several of Ron’s sculptures will be on display in the lobby of Allens Lane Art Center beginning Jan. 8. In the spring, a show of the works produced by the Vision Thru Art students will be held in the center’s gallery. 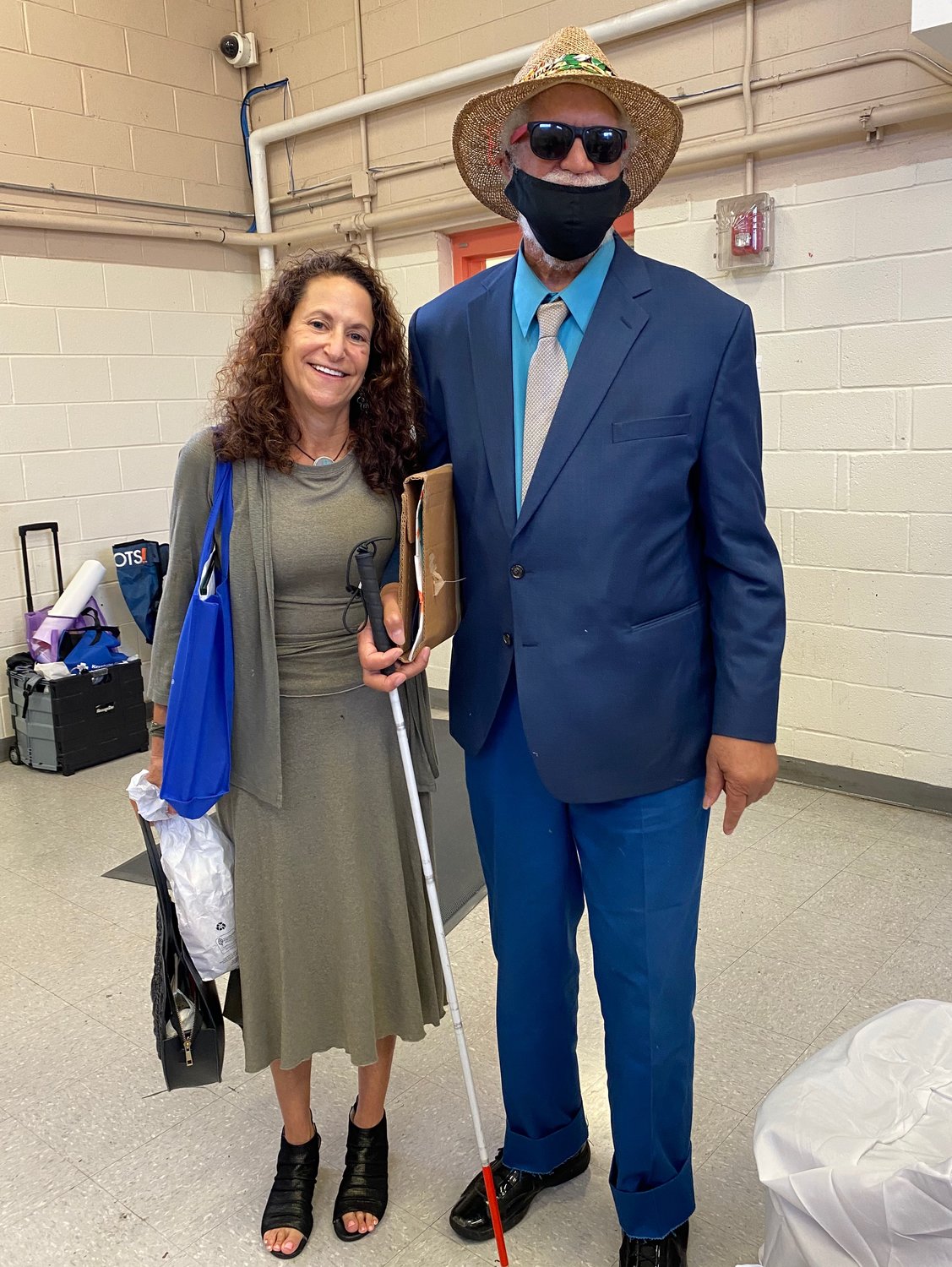 Ron Bryant, a blind ceramics student at Allens Lane Art Center, and his friend, Amy Cohen, are seen earlier this year at the Penrose Rec Center in North Philly, where Cohen was being honored for her significant fundraising efforts to restore the marquee at The Uptown Theater on North Broad Street. The theater was designed and built in the 1920s by Louis Magaziner, Cohen's great-granduncle. Several of Ron’s sculptures will be on display in the lobby of Allens Lane Art Center beginning Jan. 8. In the spring, a show of the works produced by the Vision Thru Art students will be held in the center’s gallery.
Previous Next
Posted Thursday, December 30, 2021 6:00 am
by Amy Cohen

On a mild morning in March 2020, I set out for a walk to Weavers Way Co-op in Mt. Airy. As I rounded the corner from my house on West Allens Lane to McCallum Street, I noticed a tall man walking up the middle of the two-way street. As he got closer, I realized that he was using a white cane. Alarmed, I approached him and offered to help him to the sidewalk. “No,” he told me, “I don’t want to hit my head on the tree branches. That’s why I’m in the street.”

He explained that his destination was a ceramics class at the nearby (across a busy street) Allens Lane Art Center. I offered to walk him there, and he readily accepted. It turns out that the person who usually drove him to class was away, and he was so determined to get there that he had come from Southwest Philadelphia to Mount Airy on two different SEPTA buses.

Once we had safely reached the basement ceramics studio, he invited me inside. I stayed for about a half-hour with my new friend, Ron Bryant, as well as several other visually impaired artists, their teacher and a handful of volunteers. I noticed the conviviality and gentle ribbing among the artists, and I also sensed the deep enjoyment they found in expressing themselves in clay. Vision Thru Art, I later learned, is a program that has been running at Allens Lane Art Center for more than 30 years. As I took my leave, having given Ron my cell phone number, I promised to return the following Wednesday to visit the class again.

One week later, however, much had changed. Our daughter, a senior in college, had been sent home; her younger sister, a high school senior, had also seen her school close to students. As the Covid lockdown became a reality across our area, Allens Lane Arts Center suspended its programs as well.

Although the Vision Thru Art ceramics class was cancelled, Ron called me that Wednesday morning to say hello. He has called me every Wednesday morning since. Over the past nearly two years this remarkable, 81-year-old, totally blind man has become a dear friend.

Ron was born in Philadelphia and spent his youth in and out of foster homes in a variety of neighborhoods. He tended to run away when foster parents became too protective of him due to his visual impairment. Despite his deteriorating eyesight, he always prioritized freedom of movement. He even recalls taking a round trip freight train ride to New York as a young teenager. By age 17, he had lost use of his right eye.

While living with a foster family in Mt. Airy, Ron attended Bok Technical High School in South Philadelphia where he studied the restaurant industry. After graduating in 1956, Ron worked as a chef in restaurants, catering companies and private clubs throughout the city and suburbs for 38 years. At 20, he married a woman who had five brothers and four sisters, a strong appeal for an orphan like Ron. He and his wife had two daughters and stayed together for 30 years. Once he totally lost his vision, however, the marriage came under strain. He required his home to be orderly so that he could find things, which caused problems, but Ron is now a grandfather and great-grandfather.

After Ron lost his sight completely, he ran a commissary at Philadelphia State Hospital at Byberry through a state program for the blind. When Byberry closed in 1990, he began using his creative energies for art, taking classes at the Philadelphia Museum of Art and Pennsylvania Academy of Fine Arts. In the late 1990s, he joined Vision Thru Art at Allens Lane.

In addition to these classes for the visually impaired, Ron also participates in art classes at the Philadelphia Senior Center at Broad and Lombard and at Face to Face in Germantown. He regularly visits the Center in the Park at Vernon Park to join other seniors in singing, exercise and Bible study.

Ron is a passionate Philadelphia sports fan. Despite their lackluster 2021 season, Ron listened to nearly every Phillies game on the radio. In August, Ron accompanied my husband, daughter and myself to a game at Citizens Bank Park. He attributes the team’s 6-to-1 win over the Cincinnati Reds to our presence.

Nancy Sophy, who was named Executive Director of the Allens Lane Art Center in July, 2021, has known Ron since 2015 when she became the coordinator for his class at the Philadelphia Museum of Art. Sophy was impressed by the visually impaired and blind students’ dedication to creating art. Like Ron and his classmates, she was thrilled to be able to restart the Vision Thru Art program in September of this year.

Several of Ron’s sculptures will be on display in the lobby of Allens Lane Art Center beginning Jan. 8. In the spring, a show of the works produced by the Vision Thru Art students will be held in the center’s gallery. One of Ron’s main inspirations for making art is to hear the reaction of others to his work. He is quite excited about the Arts Center’s plans to exhibit his sculpture.

Through the past two years of climbing death tolls, mask mandates, cancelled plans and unexpected isolation, Ron has remained upbeat and optimistic. Meeting him at any point would have been a privilege, but getting to know him during a global pandemic has truly been a gift.