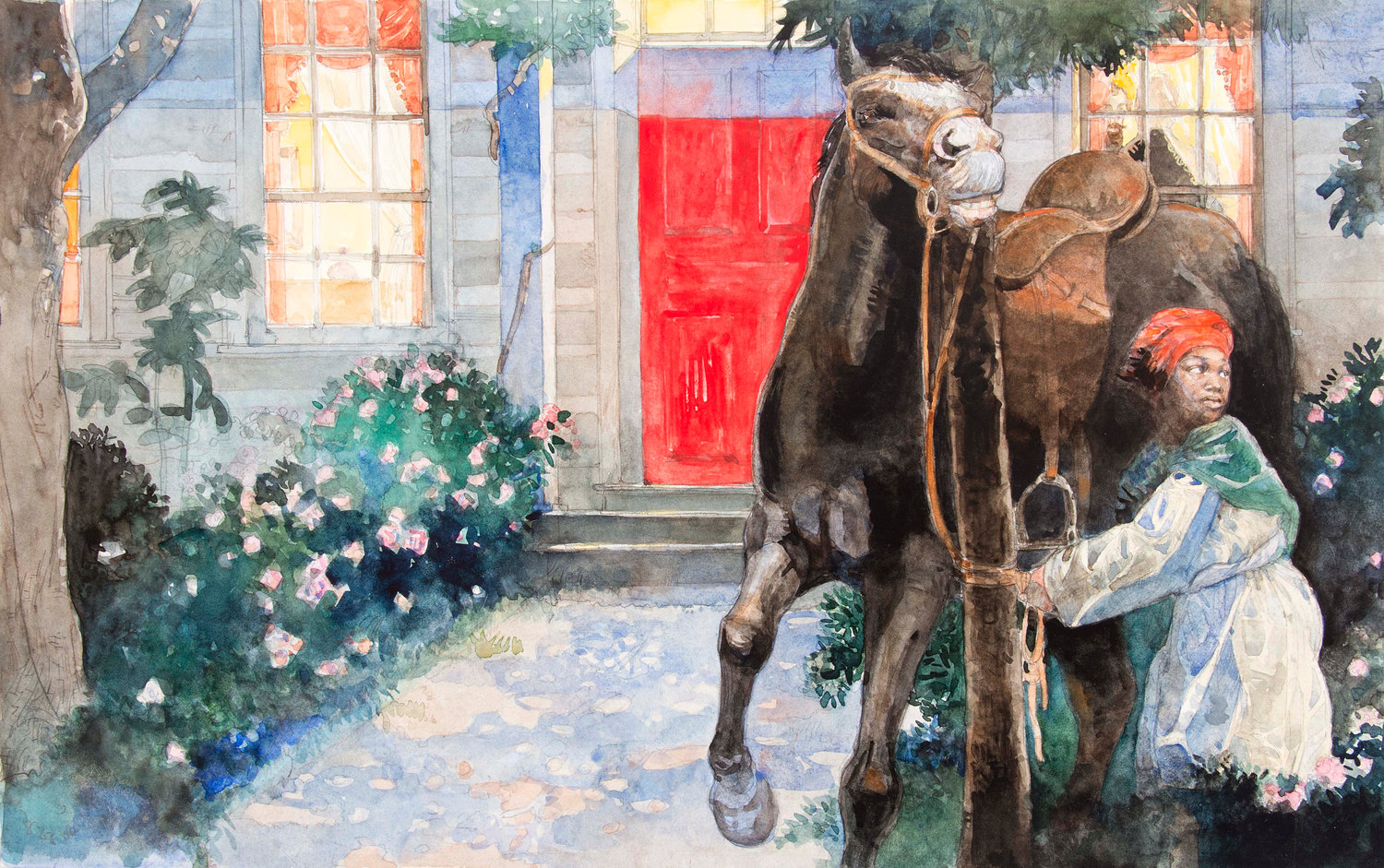 Minty Hears Her Master'sVoice, from Minty:A Story of Young Harriet Tubman, 1996, by Jerry Pinkney.Watercolor, graphite, and gouache on paper. 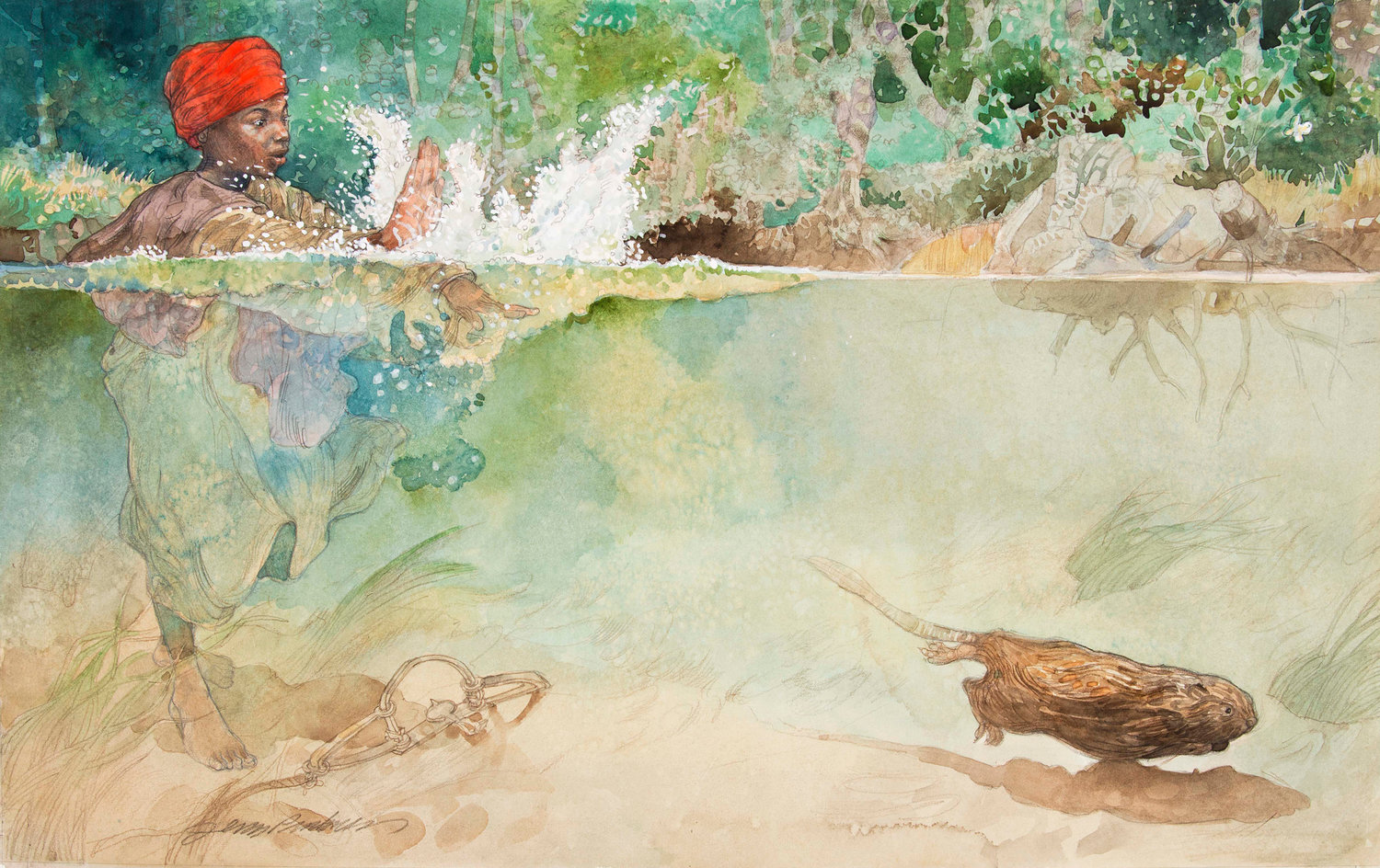 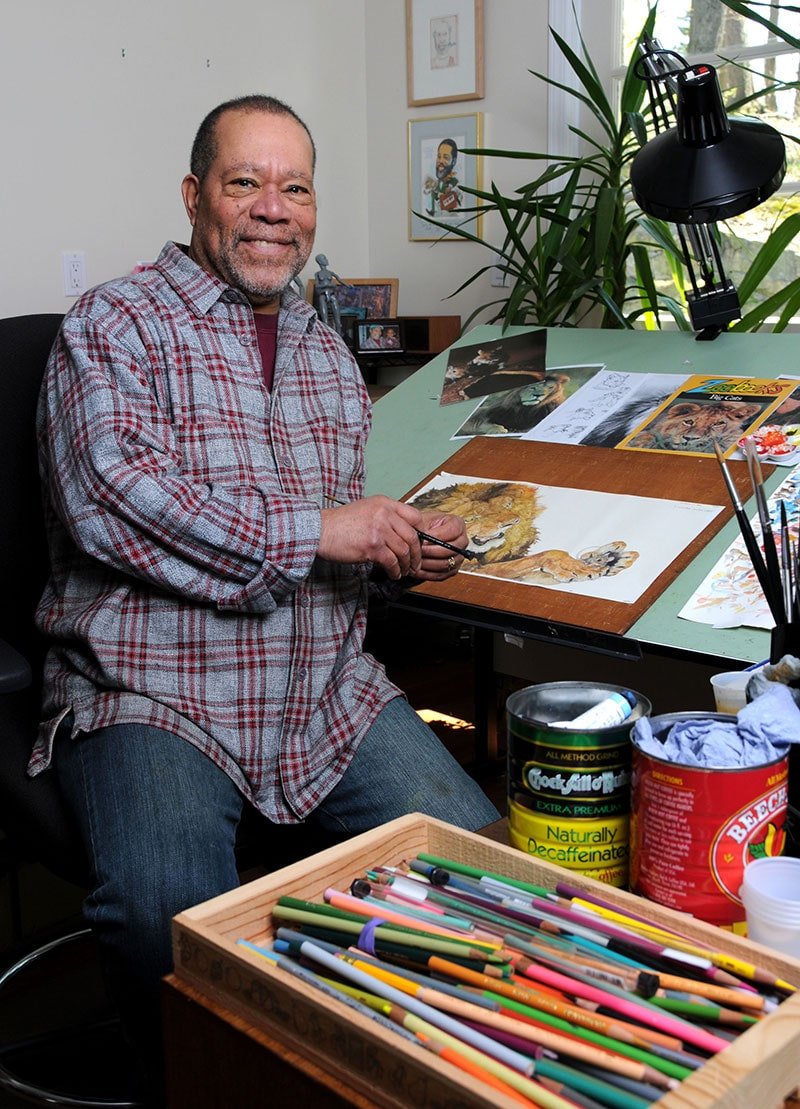 Jerry Pinkney in his studio 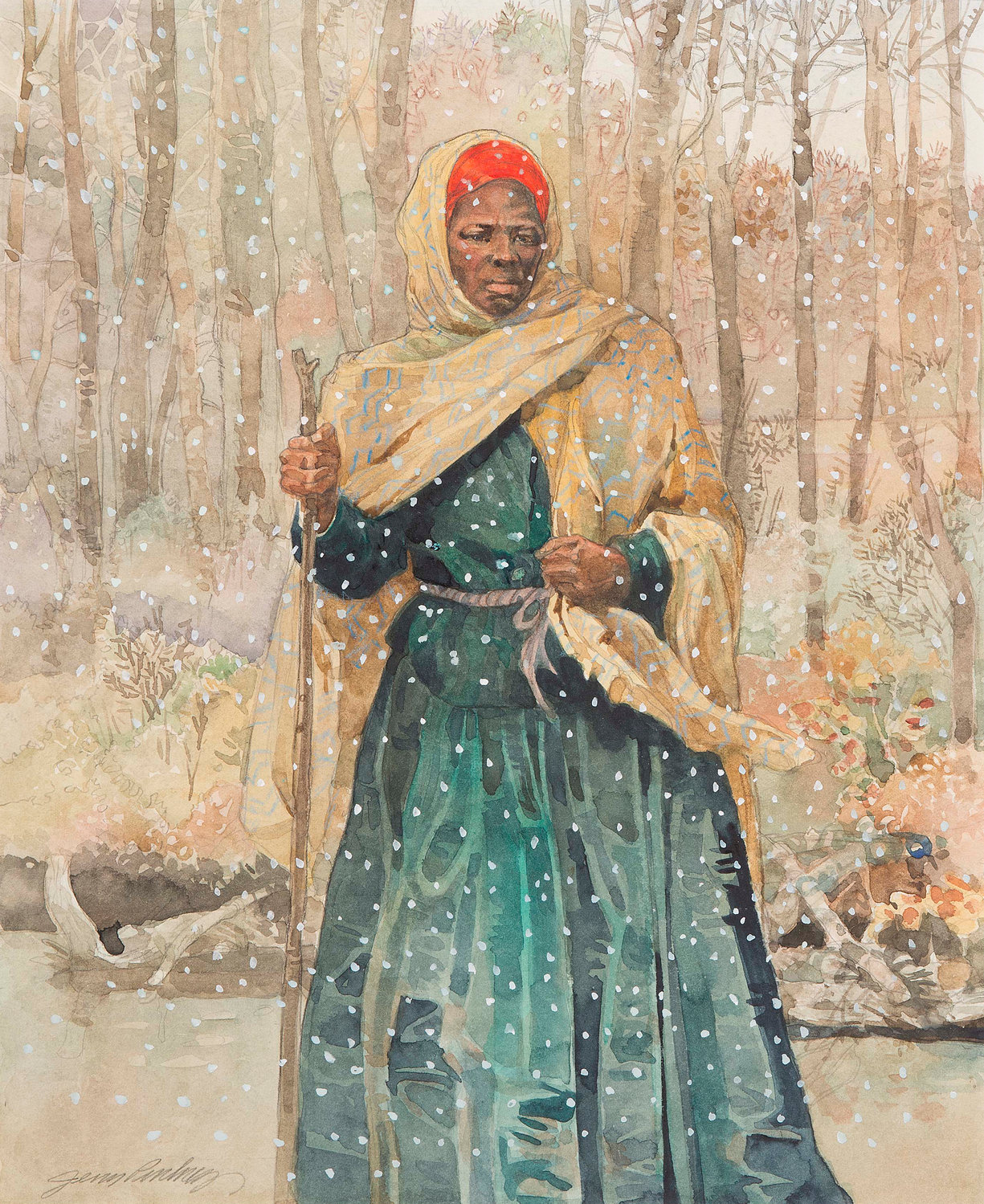 Moses of Her People, from Minty:A Story of Young HarrietTubman, 1996, by Jerry Pinkney.Watercolor and graphite on Arches watercolor paper. 13 3/4 x 11 1/4 in 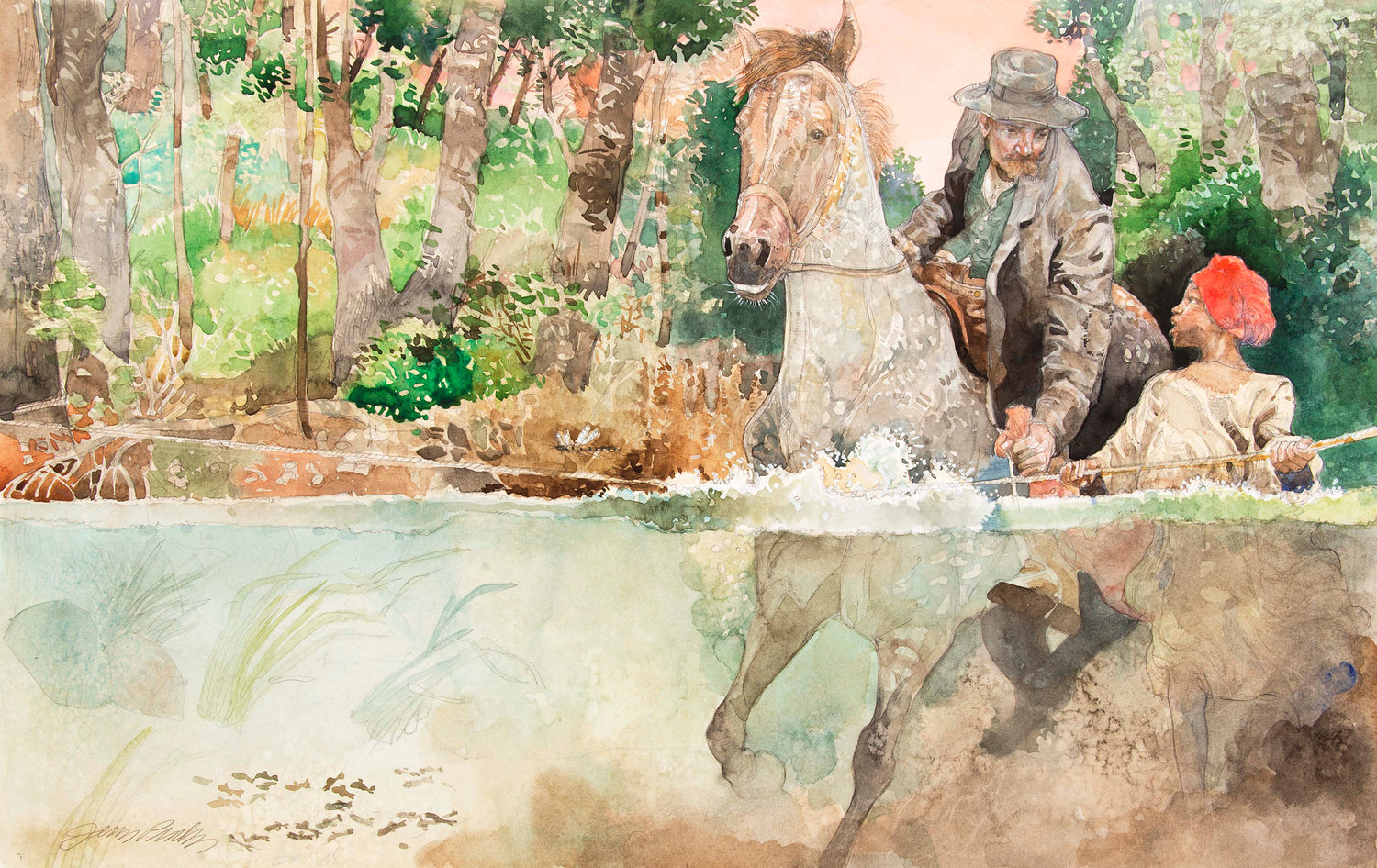 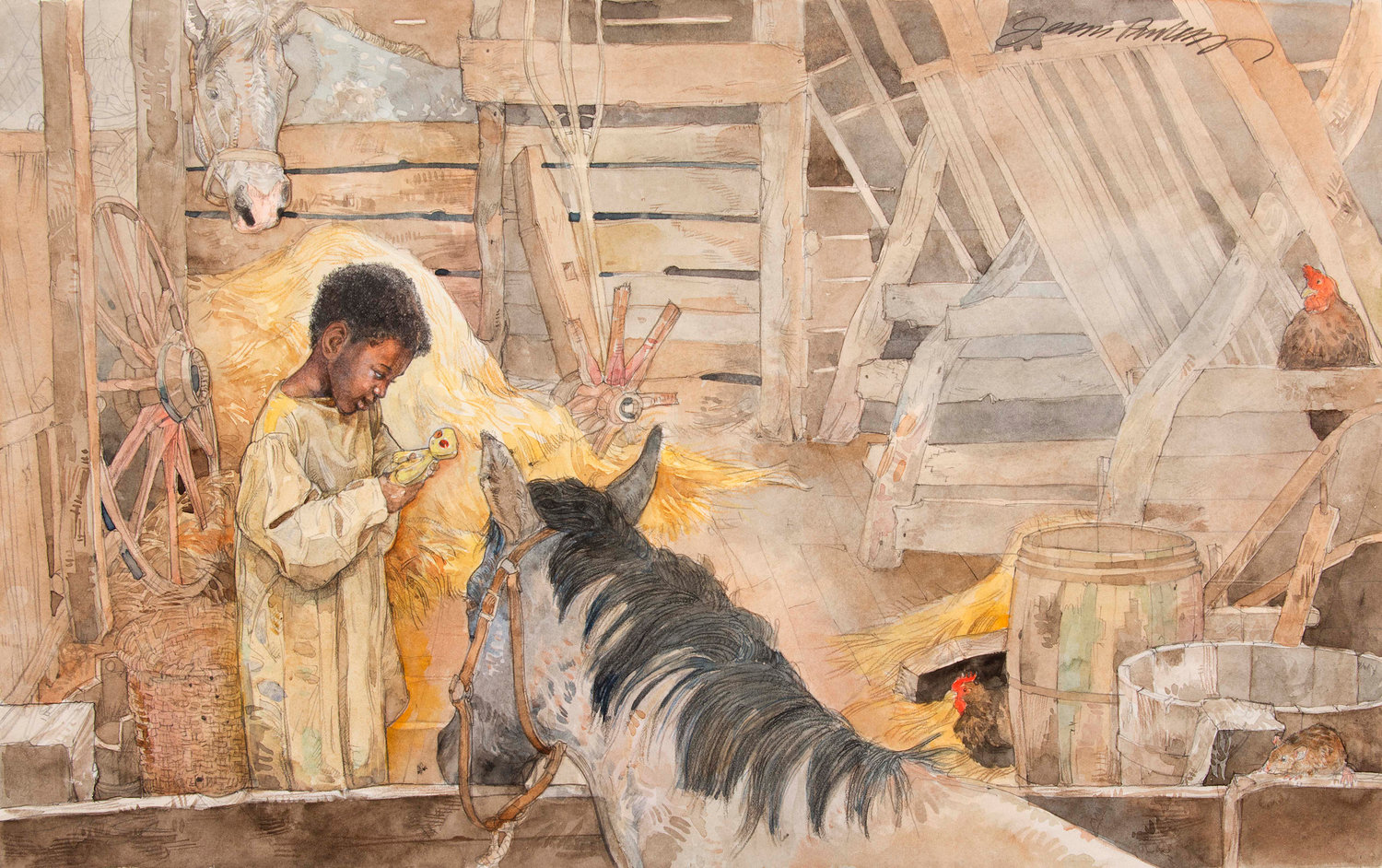 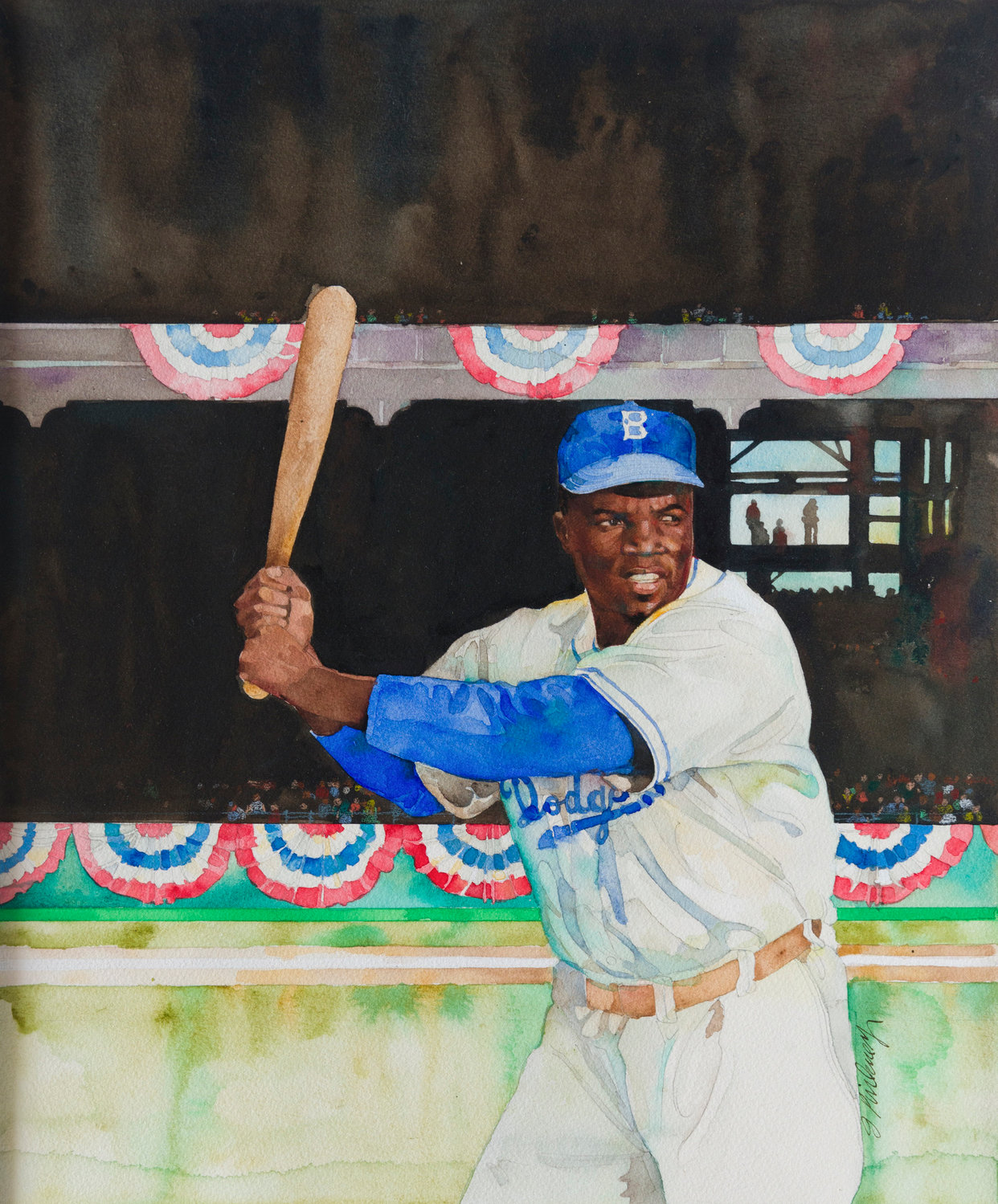 Jerry Pinkney, a Germantown native who became one of the most celebrated illustrators in the country, died last Wednesday of a heart attack at the age of 81 at his home in New York State, according to his long-time agent Sheldon Fogelman.

Pinkney, who was born and raised in Germantown on East Earlham Street just a stone’s throw from the cemetery of St. Luke’s Episcopal Church, eventually touched the lives of hundreds of thousands, if not millions of people throughout the world. He possessed an extraordinary gift for storytelling, and was the recipient of just about every award and honor bestowed on illustration artists. He was also a beloved friend to many in the Philadelphia art world.

Director and CEO of the Woodmere Art Museum William Valerio, who was a close personal friend as well as a creative collaborator, said Pinkney’s passing feels like a death in the family.

“Jerry was really a shining star. He had such an effervescent personality -- warm, giving, and generous,” said Valerio. “We worked on so many projects together, and had so many plans for future adventures. This is really hard for everyone here.”

Valerio said that Pinkney always made time to collaborate with others, and to share his passion for art.

“I don’t know that he ever said ‘no’ to an organization that proposed a partnership, or an education program, or an exhibition that would bring art into people’s lives,” Valerio said. “He believed that art could make the world a better place down to his smallest fingertips.

“Whenever he came to speak to a group of kids at the Woodmere, he would sit without any rush, answer everyone’s questions, and really open himself up. He’d talk about how he grew up dyslexic, that the arts were his salvation, and that he hoped everyone could find their calling in life, just as he did,” Valerio said.

Pinkney was born on Dec. 22, 1939, to Willie Mae and James Pinkney. He was the middle child in a family of five siblings. In recorded interviews, Pinkney has said that he struggled with dyslexia in school but excelled at drawing, even at a young age. His mother encouraged him to develop his skills by enrolling him in art classes, while his father did not consider art a sustainable career until Pinkney grew older.

“At home there were always materials I could draw with, even though there were no artists in my family or on the block. The drawing materials were supposed to keep us busy. We did not even have a TV. I actually had a learning disability, but the drawing gave me a sense of pleasure that nothing else did. It gave me a feeling of wholeness and calmness. I became the 'class artist.'”

Pinkney was deeply influenced by his childhood surroundings. In a recent conversation recorded for Woodmere’s podcast, 'Diving Board,' he said that although he took it for granted as a child, the great historic architecture and cultural textures of Germantown Avenue – the primary urban artery of his family’s life – fueled his passion for history.

In a 2019 video interview with ReadingRockets.com, Pinkney said he grew up on a block with African American families who had migrated from the South, but that there were Jewish and Italian neighborhoods nearby. “That made me think about the bigger world,” he said. “I was always curious about other cultures.”

During his early teens, Pinkney worked at a local newspaper stand, where he would pass the time by drawing city life and earned money to buy art supplies by shining shoes. His talent caught the eye of customer and cartoonist John Liney, who worked on the “Henry” comic strip, which was syndicated at the time in dozens of daily newspapers. Liney showed Pinkney how artistry could be used for commercial purposes.

Pinkney attended Dobbins Vocational High School in North Philadelphia, where he met his future wife, Gloria Jean Pinkney. He graduated from Dobbins in 1957 and was granted a full scholarship to the Philadelphia Museum College of Art (now the University of the Arts). He attended the school for a few years but left before graduating to start a family with Gloria.

Many of Pinkney’s books have been bestsellers, and he often addressed some of hard facts of American history in his work, including slavery, and life in the Jim Crow south.

"I am a storyteller at heart,” Pinkney once told the Society of Illustrators. "There is something special about knowing that your stories can alter the way people see the world and their place within it."

“He really took on some hard histories, but he was able to do it in such a way that young people could understand the truth and also see the humanity in it, in a way that also allowed for optimism. He had a magical ability to do that,” Valerio said. “He would always say, we can’t ignore the past, but when we look to the future, there is an arc of promise.”

Valerio said the museum has just announced a major gift by Pinkney, which is the illustrations for “Minty,” a book about Harriet Tubman as a little girl. The book, which is one of his most famous, was meticulously researched, Valerio said, and the gift “is a very great treasure of the institution.”

“Jerry did an incredible amount of research for that book; he knew exactly the difference characters would be wearing, what objects would have been on the table, and what the tasks of a young enslaved girl living on a plantation might have been,” said Valerio. “And that’s what gives the book so much authenticity.”

Pinkney often collaborated with authors Julius Lester, Patricia McKissack, Robert San Souci and his wife. In addition to children's books, for which he is best known, Pinkney's artwork has appeared in museums, magazines, greeting cards and on U.S. postage stamps. Two of his children, Myles and Brian, also have become successful children's book illustrators. Brian has illustrated more than two dozen books. In fact, Jerry, Myles and Brian collaborated to co-illustrate Gloria Jean Pinkney's 2001 book, “In the Forest of Your Remembrance.”

Pinkney is survived by his wife, Gloria, and many siblings, children and grandchildren.