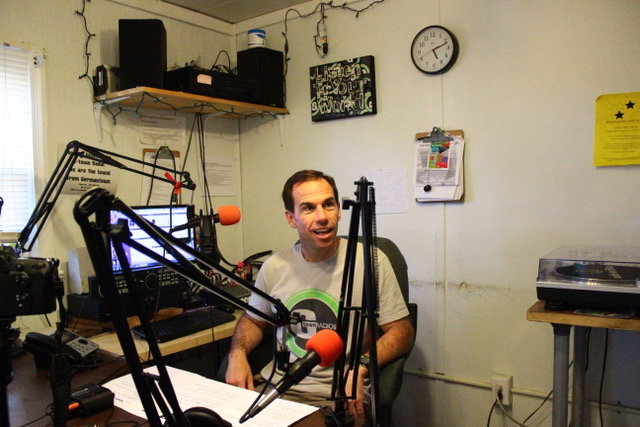 Jim Bear, who started G-Town Radio on a home computer in his Germantown apartment, died of lung cancer on March 18 at the age of 48.
Posted Wednesday, April 6, 2022 6:00 am
by Len Lear

In 2006, following the demise of the Germantown Courier newspaper, Jim Bear started G-Town Radio, the nonprofit, commercial-free, music-and-talk radio station that has since become something of a cult favorite among listeners.

He did it on a home computer in his Germantown apartment - all while working a day job and being preoccupied with moving his family into a new house.

"I was really motivated by the power of community radio to reach local diverse groups with underrepresented sounds and ideas," Bear, a Roslyn native, told me a decade ago. "The major radio stations were owned by big corporations that do not want to take chances or rock the boat. It is all about money.”

Bear objected to the lack of freedom that DJ’s had at most all-music stations, lamenting the loss of personalities that thrived back in the 1950’s. He pointed to Buddy Holly, who Bear said got his start by playing his own original music live on a local radio station in Texas.

“Today’s DJ’s have no freedom to pick a song that he or she would like to play, and they would lose their job if they ever said something that might possibly offend someone,” Bear said. “All decisions are made far away by computers. You might as well have robots playing music.”

So Bear held a meeting at a church in Mt. Airy, and invited anyone who wanted to do his or her own radio show. It turned out that lots of people did, and the station grew like a vine, eventually broadcasting 24 hours a day.

In 2015, G-Town radio, which can also be heard online at gtownradio.com, was granted a low power FM station radio broadcast license.

In 2020, however, Bear stepped down from his role due to illness, and on March 18 of this year he died of lung cancer at the age of 48.

And the people who are left to carry on his legacy are still reeling from the loss.

“Not having Jim around anymore hasn't really sunk in, but it will, and it is going to be hard. He set the standard on how to lead a community project,” said Tom Casetta, the station’s manager. “I feel lucky to have had the chance to work closely with him and have him as a treasured friend. His vision, patience and support were unmatched.”

“We are forever grateful that he gave Germantown a voice and told us our voices mattered,” said Joanna Wikander, program director. “Jim led G-Town Radio with grace, humility and a sharp sense of humor … Jim's kindness, generosity, humor, excellent taste in music and friendship will be missed.”

Longtime G-Town Radio programmer Reade McCardell added, “Like all the most precious people we get to share space with, Jim utterly defied description. He was a man who quietly (and with no small amount of humor) changed people's lives for the better on a freakishly daily basis.”

Today housed in Germantown's Maplewood Mall, G-Town Radio (WGGT-LP 92.9 FM) broadcasts 30 regularly scheduled programs, which can be heard in every Northwest Philly neighborhood and parts of North and Northeast Philly.

And they are anything but bland.

On any given day you might hear comedy, funk music, legal advice (in plain language), science fiction “for geeks,” a discussion about Philadelphia’s trash pickup and pothole problems, classic jazz, a conversation about what you can do to stop porch pirates, original audio dramas, tributes to deceased musicians, or a discussion of Christmas commercialization. In other words, things you will not hear on corporate radio.

My own favorite show was produced a few years back by Jim Harris, former satirical columnist for the Local, and his singers and sketch comics. Called "Avenue G, a free Mt. Airy Home Companion," it was broadcast live at the former Mt. Airy Read and Eat Bookstore. Harris appeared as his alter ego, a singing groundhog who bore a funhouse-mirror resemblance to the famous non-singing groundhog that predicts when winter will end. Harris broke into a tragic-comic, fall-down funny song to the melody of "I Dreamed a Dream" from "Les Miserables." There was also a hilarious spoof called “Downturn Abbey” about Lord and Lady Cheesington living in a falling-apart Germantown mansion.

In his final years as station manager and board president, Bear was able to secure significant grants to help stabilize the station’s financial future. “Bear left G-Town radio on stable ground … for long-term success,” said Letrell Crittenden, a board member who succeeded Bear as the organization’s president from 2019 to 2021. “As the station continues to thrive, so too will the wonderful gift he gave to the Germantown community and the rest of Northwest Philadelphia.”

Bear is survived by his wife, Maura, and two children, Leo and Julia.