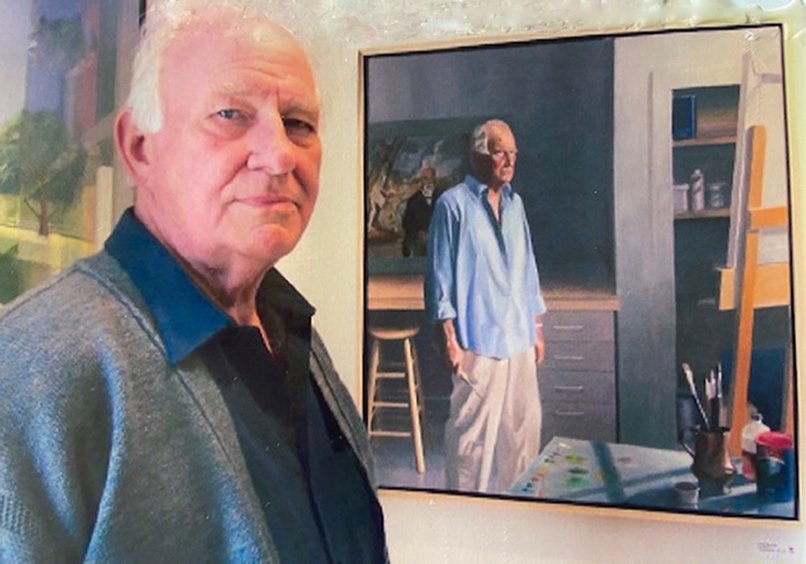 Architect John Rauch with a self-portrait he painted after his retirement.
Posted Wednesday, September 14, 2022 12:00 am
by George McNeely

Northwest Philadelphia has recently lost one of our beloved longtime neighbors, John Rauch.

To the world at large, John was one of the 20th century’s most important architects. He had a long and distinguished career as the managing partner in the architectural firm Venturi & Rauch (now known as VSBA Architects & Planners). Their projects span the globe, from the Sainsbury Wing at the National Gallery in London to their best-known local building: the Vanna Venturi House, which was designed for Robert Venturi’s mother. Their books “Learning from Las Vegas” and “Complexity and Contradiction in Architecture” redefined architectural thinking and are still essential and engaging reading today.

But to many of us here in Chestnut Hill, John was also a very good friend, someone who was always ready to reach out and connect with others.

I lived on Gatehouse Lane, which is where his wife Carol designed and built their handsome house in Chestnut Hill, overlooking the Cresheim ravine, and often encountered John on his daily walks.

It was a privilege to enjoy his company. One recent day, as city road workers were installing new curbs on McCallum Street, I was out discussing the project scope with them. John walked up, and immediately, the job supervisor pulled me to the side and asked whether that was John Rauch? I responded, yes indeed, and introduced them.  They happily discussed architecture and city planning over the years in Philadelphia, as the workers paused to listen and the cars whizzed by.

A leader and mentor

During his years with Venturi & Rauch, John played a particular role at the firm.

“I asked the CEO of a major construction company, who was especially interested in the aesthetic qualities of architecture and quite influential, ‘If you were going to recommend an architecture firm to an important client, which would you recommend?” said Leslie Gallery-Dilworth, founder and executive director of the Foundation for Architecture. “Without hesitation, he said ‘Venturi & Rauch.’  I was surprised, and said, ‘I would not have thought you were a fan of Robert Venturi’s theories.’  He responded, ‘I am not, but I am a big fan of John Rauch. As a contractor, their drawings and specs are the very best. They deliver what they promise, when they promise it.  They are a pleasure to work with.’”

John was also a mentor and supporter of younger architects both in and outside the firm, and actively involved with the broader professions of architecture and city planning in Philadelphia.

James Timberlake and Stephen Kieran, founding partners of the architecture firm KieranTimberlake and designers of the new American Embassy in London, both worked at Venturi & Rauch earlier in their careers.

“While Bob Venturi, Denise Scott Brown or Steve Izenour were often the public face of the firm, the ‘straw that stirred the drink’ was John Rauch,” Timberlake said. “John was an incredible design talent prior to the partnership with Bob. His critical eye was throughout much of the work that was built.

“He was an indomitable foundation of straight talk, sure-handed risk management direction, and leadership,” Timberlake continued. “He was a mentor, teacher, and occasionally a stern organizing force, but someone who always displayed a wry sense of humor even during difficult project moments.  We are grateful that he had a profound effect upon Steve’s and my careers along with so many other architects who came through the firm.”

On the lighter side, architect Simon Tickell, who also worked at the firm earlier in his career, remembers, “John was indeed a gregarious role model for those of us who worked on the second floor. He took his afternoon naps in the fold-out lounge chair to escape the frenetic third floor. John would snooze a bit as we kept our eyes down on the boards, and then visit with us a bit afterwards. Those were fun days working in one of the best firms in the country!”

John remained creative throughout his entire life, and was always learning, even after he retired. Upon leaving the firm in 1987, he took painting classes at the Pennsylvania Academy of the Fine Arts (PAFA).

“I would add that John was a very gifted painter, and very few people knew that,” Nancy Williams said. “He did an amazing self-portrait of the artist in his studio in which he was the star artist, at around age 80.  His study of his own features was so exactingly correct —from the slight stoop of the shoulders to all the facial wrinkles and droops, but his expression was gruff (not unusual for him) and determined, as if anyone should dare challenge his tale.”

One of his teachers at PAFA was noted painter Liz Osborne, who was featured in an exhibition in 2018 at the Woodmere Art Museum. “He could connect to anybody. He was so focused and pushed himself to learn,” she said. “He reached out to people. Everyone enjoyed being around him.”

“His ongoing commitment to learning was inspiring,” John’s friend David Vaughan said. “He read deeply and broadly and was a good listener.  Conversations over dinners at John and Carol's beautiful house often touched on philosophical questions of art and life.  After the rest of us had ‘bloviated’ (John’s term) for a while, John would quietly come up with a pithy, well-articulated insight that captured the essence of the subject at hand, often flirted with the outrageous, but always left you wiser.”

“We knew another creative side to John, and that was his passion in the kitchen - his ‘alter workshop,’ said Randy Williams, a longtime friend. “Carol is an excellent cook, but John loved the opportunity to take over and orchestrate a meal for friends. Of course, he needed Carol’s support, but there would be no question who was the chef for the night.

A talent for friendship

Fellow architect Joe Jordan and his wife Sarah remember a longtime friendship. Jordan had known John when he had been president of the Philadelphia chapter of the American Institute of Architects, Joe Jordan wrote in an email. Sarah had been a realtor and had helped Carol decide to purchase a small extended Trinity in the Washington West neighborhood.  A first shared dinner at that house was the beginning of a delightful lifelong friendship.

“For the next fifty years, we all dined together, partied together, went to the theater together, traveled in the USA and abroad for extended stays,” Jordan continued in the email. “On most of these trips, John was the perpetual driver, and a very good one.  He was also the early riser of our pod and often provider of crusty baked bread still warm from the nearest bakery.”

According to Jordan, John grew up on a farm, and it was his desire to live close to nature that eventually led the couple to leave Center City for Chestnut Hill.

“He was never a city guy and after residency in Carol’s Trinity with no doubt more than one bump on his head from the low-ceiled circular staircase, he was ready to build and move to their magnificent house in Chestnut Hill,” he said. “Many a delicious meal and cherished memories ensued in that wooded paradise.”

“I think of the huge sheltering gable on the front of their house, so broad and expansive, which seemed designed to offset the cliff-hanger deck into the abyss on the backside,” their friend Carol Williams says of that house. “Contradiction and complexity.”

We are all blessed to have known John.