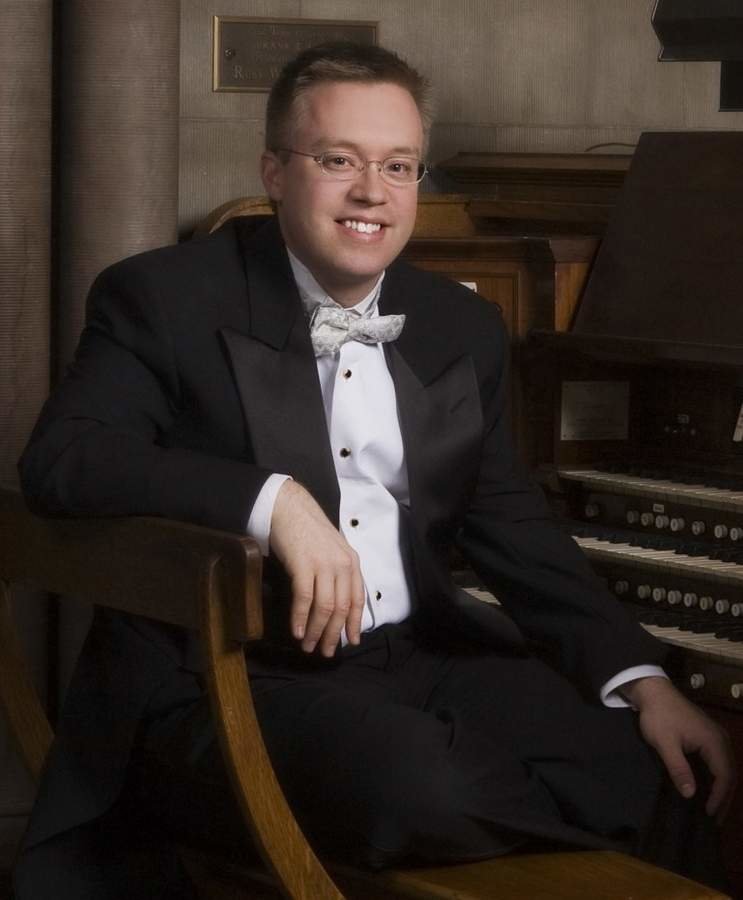 Andrew Kotylo, music director at St. Paul’s Episcopal Church in Chestnut Hill.Kotylo conducted his 38-member choir and organ scholar Emily Dawn Amos in a Choral Evensong to mark the Feast of St. Michael and All Angels.
Posted Friday, October 8, 2021 8:00 am
by Michael Caruso

As is almost always the case in Anglican Choral Evensong, the principal work of the musical roster was the setting of the “Magnificat” (“My soul doth magnify the Lord'') and the “Nunc Dimittis” (“Lord, now lettest thou thy servant depart in peace”). The 19th century’s Oxford Movement produced a splendid repertoire of musical settings of these biblical texts. That canon includes the “Evening Service in D'' by George Dyson.

In both scores, Kotylo elicited singing that was characterized by broadly varied dynamics, a smooth transition from one section to the next, a seamless blend between the individual singers in each section, a rock-solid balance between the four principal vocal ranges of soprano-alto-tenor-bass, and an effortless delineation of the all-important text.

Excellent diction was at the top of the list of the strengths of the interpretation given Henry Balfour Gardiner’s anthem at the Offertory, “Evening Hymn.” Set to a Latin text taken from the 8th century Roman Breviary and translated into English by John Mason Neale during the 19th century, Kotylo’s choristers sang with eloquent simplicity. Clarity of texture was no less admirable and pitch and tuning were immaculate during even the unaccompanied passages.

Coming up in the near future, St. Paul’s will host its next Choral Evensong Sunday, Oct. 24, at 5 p.m. The ancient Feast of All Souls’ will be celebrated with a Solemn Eucharist Sunday, Nov. 7, at 5 p.m. and a performance of the “Requiem Mass” of Gabriel Faure. This season’s “Five Fridays” of fundraising recitals opens Oct. 15 at 7:30 p.m. with performances by Ekaterina Skliar and Beomjae Kim.

Matthew Glandorf and Choral Arts Philadelphia will return to “live in-person” performance Wednesday, Nov. 10, & Sunday, Nov. 14, with “The Lost Oratorios of Giacomo Carissimi.” The first concert will take place in the Episcopal Church of the Holy Trinity, Rittenhouse Square, Philadelphia; the second at the Episcopal Church of the Good Shepherd, Rosemont, where Glandorf is music director.

When I asked him how Choral Arts had weathered the COVID-19 storm, he replied, “Once we collectively got our bearings with the realities of the pandemic, the board rolled up its sleeves and had a fundraising campaign last fall. As a result of their efforts, we not only managed to get through a season with four digital concerts with small forces, but we were also able to retire our outstanding debt and end the year ‘in the black.’ We were able to prove that our audience stuck with us and were grateful for the opportunity to continue hearing music.

“For the upcoming season,” Glandorf continued, “the chorus will be around 40 singers. We are being very stringent about following safety guidelines to protect the health and well-being of our musicians and our audiences.”

Regarding the question of Choral Arts’ change of venues from St. Clement’s Episcopal Church in Center City to the pairing of Holy Trinity and Good Shepherd, Glandorf replied, “We felt that it was time to find a new home with better access. No other church in the city is as visible as Holy Trinity on Rittenhouse Square. It offers a large, open space that can accommodate a large audience, is flexible for various configurations, and it has pleasant acoustics suitable particularly for the contrapuntal intricacies of Bach’s music.”

Continuing, he said, “Choral Arts is embarking on a two-season exploration of the oratorio. This will range from the genre’s origins in the 17th century through to a score Choral Arts commissioned in 2019. The year 2022 will mark Choral Arts’ 40th anniversary season, so we are kicking off that celebration with our traditional New Year’s Eve concert of Bach’s complete ‘Christmas Oratorio.’

“But for our first concert, we go back to the origins with the ‘inventor’ of the oratorio. We are very excited to present two unpublished works of Carissimi (1605-1674) that Tempesta di Mare co-director Richard Stone discovered in the manuscript archives in the archbishop’s palace in Kromeriz.”