If developers get their way, the former site of Mt. Airy’s Trolley Car Diner will become a five story, 114-unit apartment complex complete with 38 parking spaces, 7,000 square feet of commercial space on the ground floor and a roof deck. 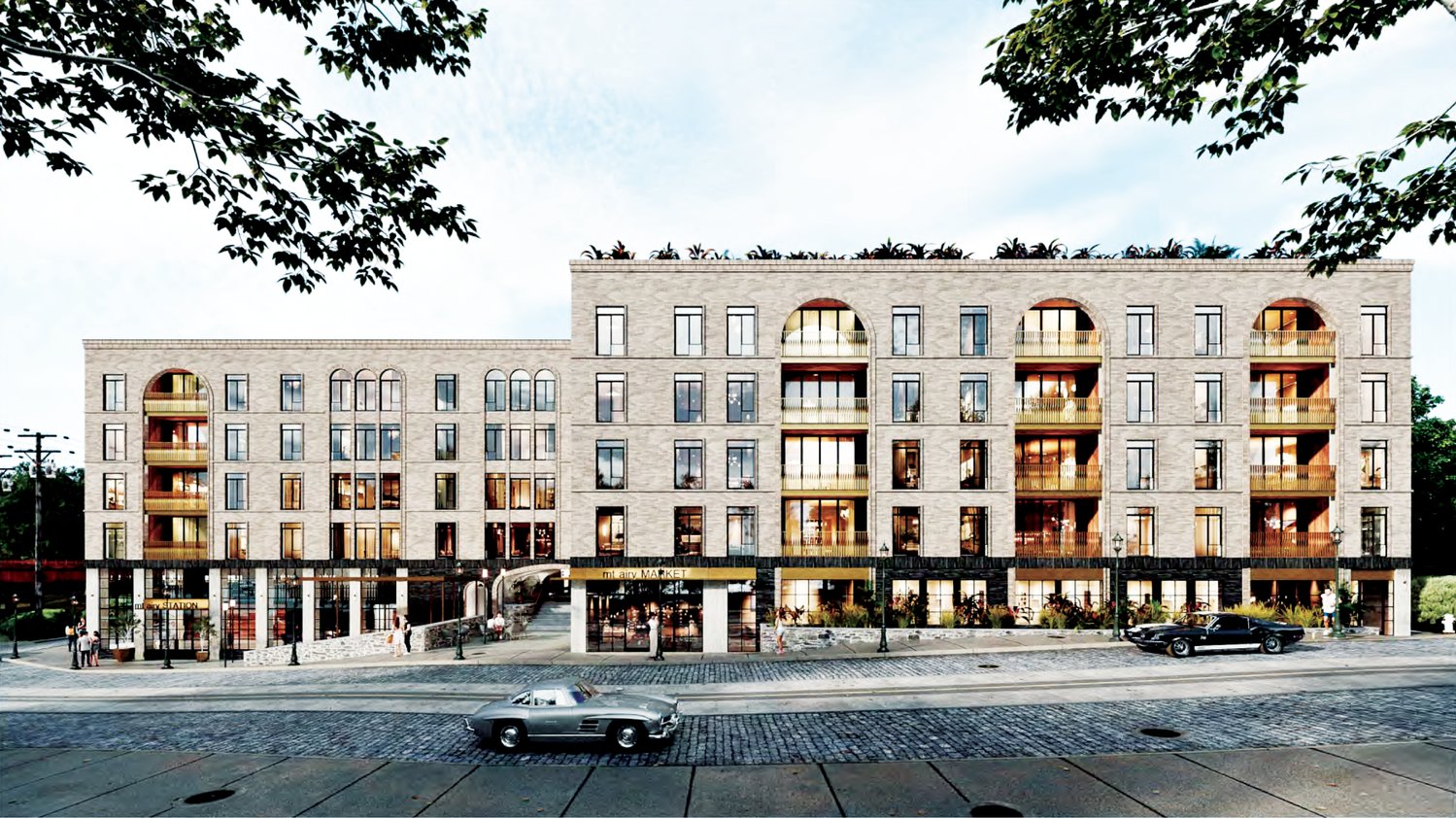 Rendering from presentation by M Architects of 7611-25 Germantown Avenue.
Dariya 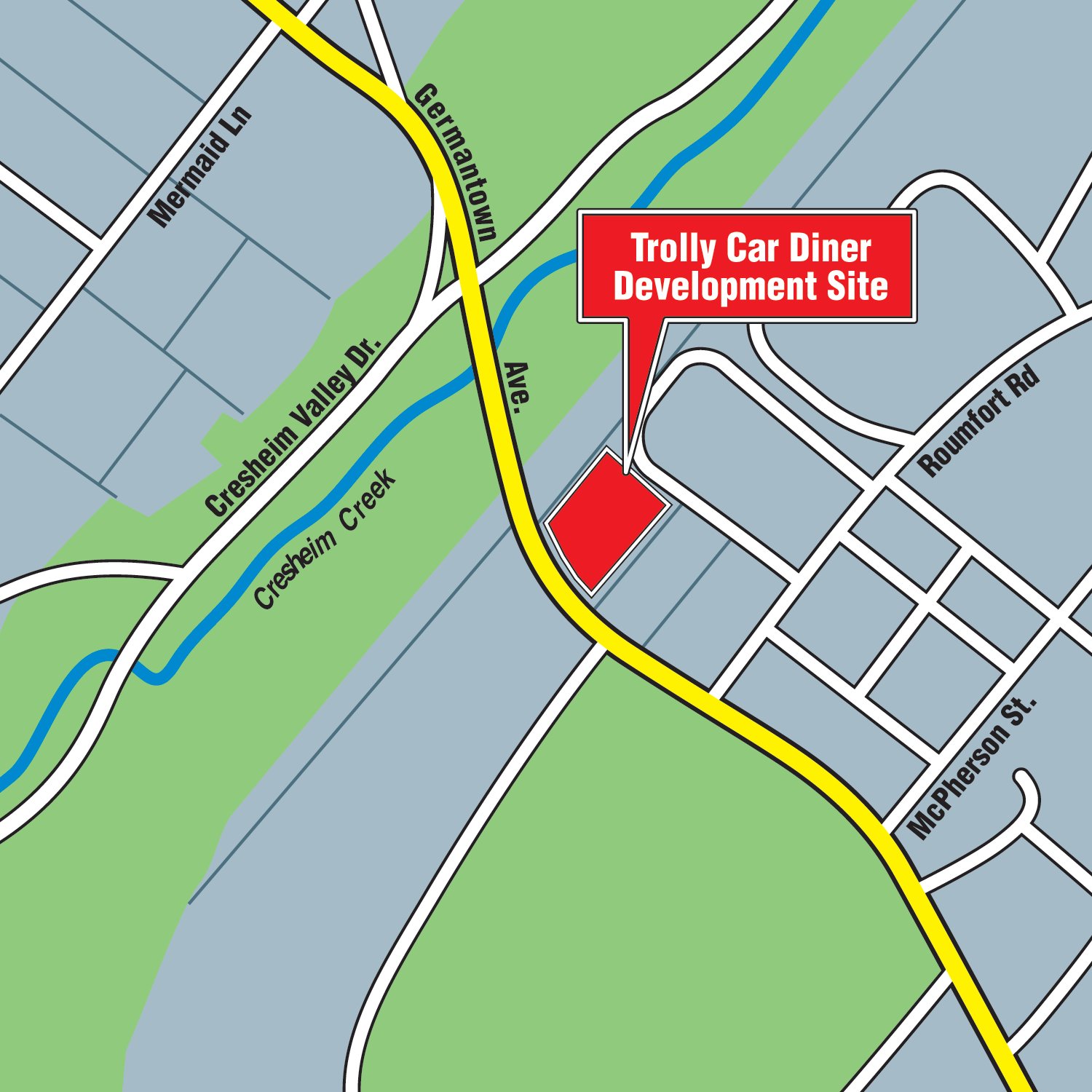 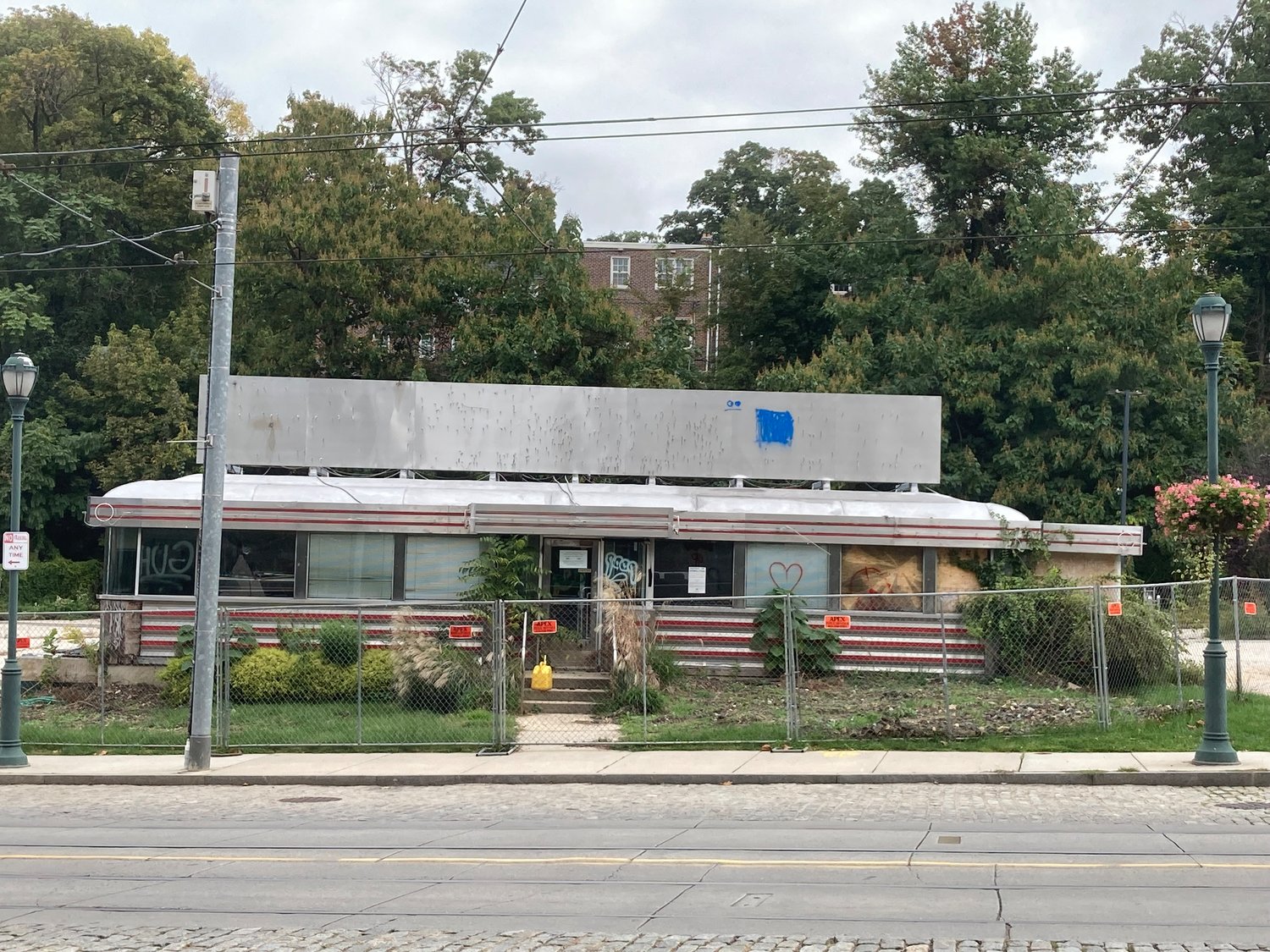 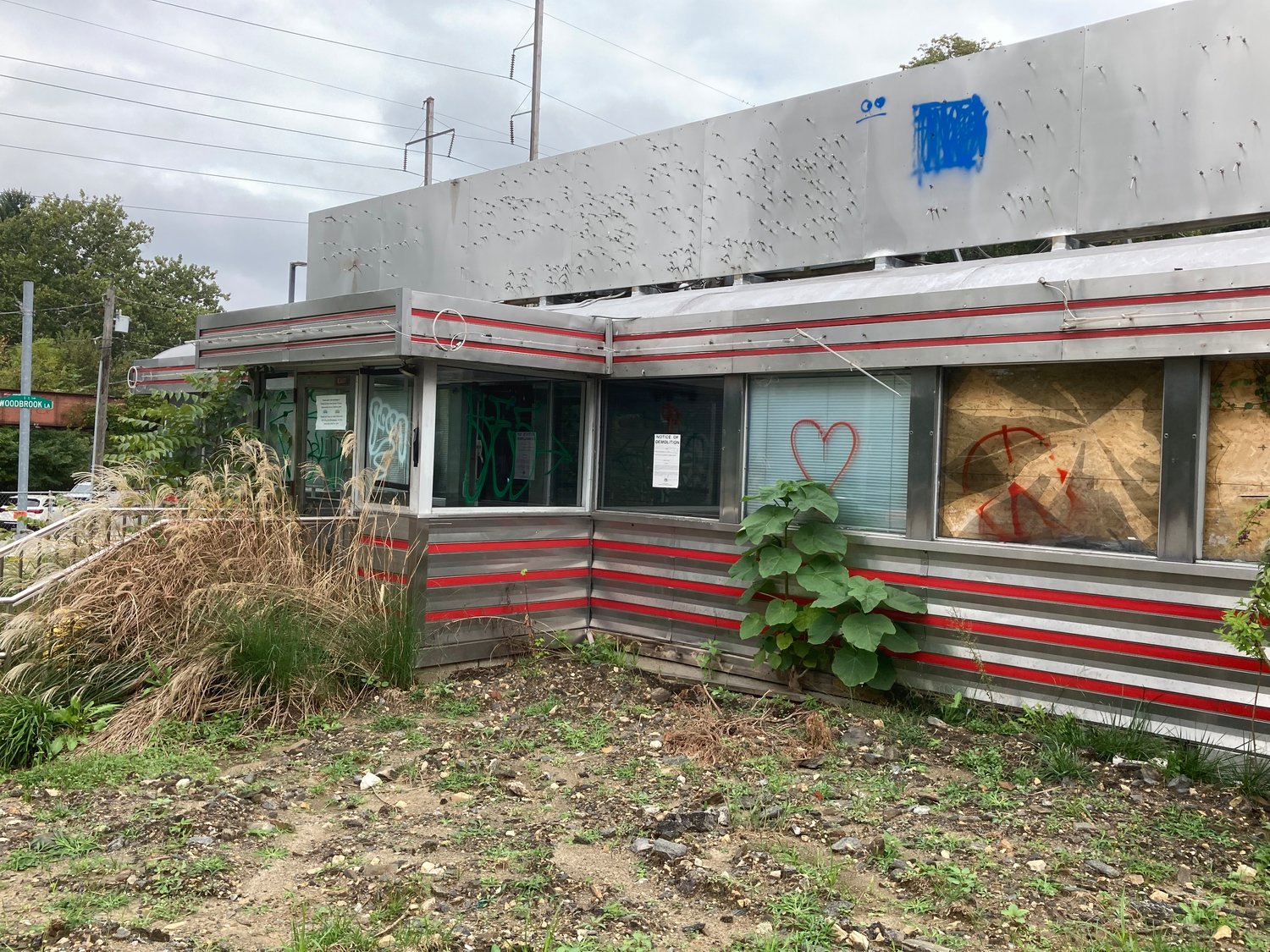 If developers get their way, the former site of Mt. Airy’s Trolley Car Diner will become a five story, 114-unit apartment complex complete with 38 parking spaces, 7,000 square feet of commercial space on the ground floor and a roof deck.

The project is the first one that is large enough to trigger a 2019 law, sponsored by Councilmember Cindy Bass, which requires an extra layer of design review for projects of a certain size. That law stipulates that the Philadelphia City Planning Commission has to approve all façades to make sure they are in harmony with Mt. Airy’s ”historic commercial area and pedestrian-oriented environment.”

Blake Development and Main Street Development, the two companies behind the project, plan to fill the complex with a mixture of one bedroom, two bedroom and studio apartments. The Germantown Avenue-facing facade will be composed predominantly of “Glacier Gray Western” brick, a color that mimics other buildings along the corridor. The back of the building will feature dark gray metal paneling.

“We went to great lengths here to tie in as best we could with the traditional materials along Germantown Avenue,” said architect James Morrissey.

Zamir Garcia, another architect on the project, said the development team tried to “play off the idea that the neighborhood remembers this as the trolley car site.”

The 38 underground parking spaces, along with a loading zone, will be accessible via Woodbrook Lane, which currently stands as a dead end street off Germantown Avenue.

The development team, along with its zoning attorney Ron Patterson, presented its plans for the parcel at a Thursday night zoning meeting hosted by the Mt. Airy Business Improvement District via Zoom. Attendance for the meeting was so high that Michael Schweisheimer, meeting host and treasurer of the Mt. Airy BID, opted to simply have residents type their questions for the development team in Zoom’s chat function rather than have each person speak.

However, their voice was heard, and they made it clear that the overwhelming majority of the community was not in support of the project. Nearly all of the feedback provided by neighbors was negative. The building was far too large for the corridor, they said, and also there were only 38 parking spots for 114 units. Where are people supposed to park?

The Local caught up with one Mt. Airy resident, Dominic Galante, who talked about why he felt the development would “make the quality of life worse” for residents in the area. Galante had no qualms with the design of the building; he simply felt it was too dense.

“It’s going to bring more cars into an area that’s already jam packed with cars,” he said. “People nearby are concerned the increase in cars will push more traffic onto other streets.”

The question is, however, whether they can do anything about it.

The proposal is by right, which means it meets the zoning code’s rules for what can be built on the site. As a result, developers don’t need permission from the city’s Zoning Board of Adjustment - or residents, for that matter - for the project to be constructed.

However, because of the proposal’s size, which is more than 50 units and more than 50,000 square feet of floor area, it triggers the city’s Civic Design Review process.

In the past, this meant that the development team had to go before the city’s CDR board to present its project and hear feedback from the board, specifically on the project’s aesthetics. If the board didn’t like what they saw, they could ask the development team to come back for a second meeting. Beyond that, the board didn’t have much power over developers. If by the second meeting it still wasn’t happy with the project, there wasn’t anything it could do to stop it.

Now, due to the law sponsored by Bass, Mt. Airy residents may have another card to play. This is the first project that’s large enough to trigger that law, so it will present the first test of how it will work.

“When Mt. Airy was rezoned a couple years ago, it included a much more stringent review of façade and other design elements,” Schweisheimer said. Part of that extra review includes the PCPC, he said, which now has to sign off on the design of proposals.

“This is really exciting,” he added. “Since [PCPC has] to sign off, hopefully there's a real strong chance of our voices getting through.”

In a phone call with the Local Monday afternoon, Bass said that the purpose of the legislation was to provide “another tool in the toolbox that gave voice to the community for facade improvements and aesthetic improvements that make developments fit within the community.”

But that doesn’t necessarily mean it can’t be used for density concerns too.

“I think there’s still an opportunity to look at other things of concern...and I think the size certainly fits into the design element of the facade,” she said. “It’s really up to the Planning Commission.”

“The only other part of the city that has this level of recommendation,” said Janis Risch, executive director of th Mt. Airy BID, “are a few blocks in Center City.”

“I understand that it's different from what's there now, and I get it,” he said. “But maybe that's part of the point,” he said, adding that he’s using the development to “revitalize the whole corridor.”

“As I looked at the vacant ground and the closed and shuttered restaurant, I saw this as an opportunity for a clean slate and an exciting start to that whole corridor,” he added. “Hopefully that beauty that we add and the living space that we add will offer benefits to the neighbors as well.”

The rental costs of the units are not yet set in stone, but Blake said prices were likely to range from $1,300 to $3,000 per month, depending on the number of bedrooms, square footage and floor level.

Speaking to neighbors’ parking concerns, Blake argued that he envisions a “steer towards mass transportation.”

“It did not sound convincing to me,” he said. “I don’t know if there’s any studies that support what he’s saying.”

Among experts, opinions about whether younger generations are buying more cars are mixed. There’s evidence that Millennials are buying fewer cars, but that might just because they’re putting more miles on the cars they have rather than buying new ones.

Towards the end of Thursday’s meeting, Schweisheimer pressed Blake on neighbors' biggest concern, which was reducing the size of the building.

“[Reducing] the overall size of the project,” Schweisheimer asked, “is that something that's up for any consideration?”

“It is not up for discussion,” Blake replied flatly.

The Trolley Car Diner and Trolley Car Ice Cream Shoppe previously occupied the property, both of which closed in 2019. The 1948 PCC trolley that had housed the ice cream shop was later donated to the Fishtown Kensington Area Business Improvement District.