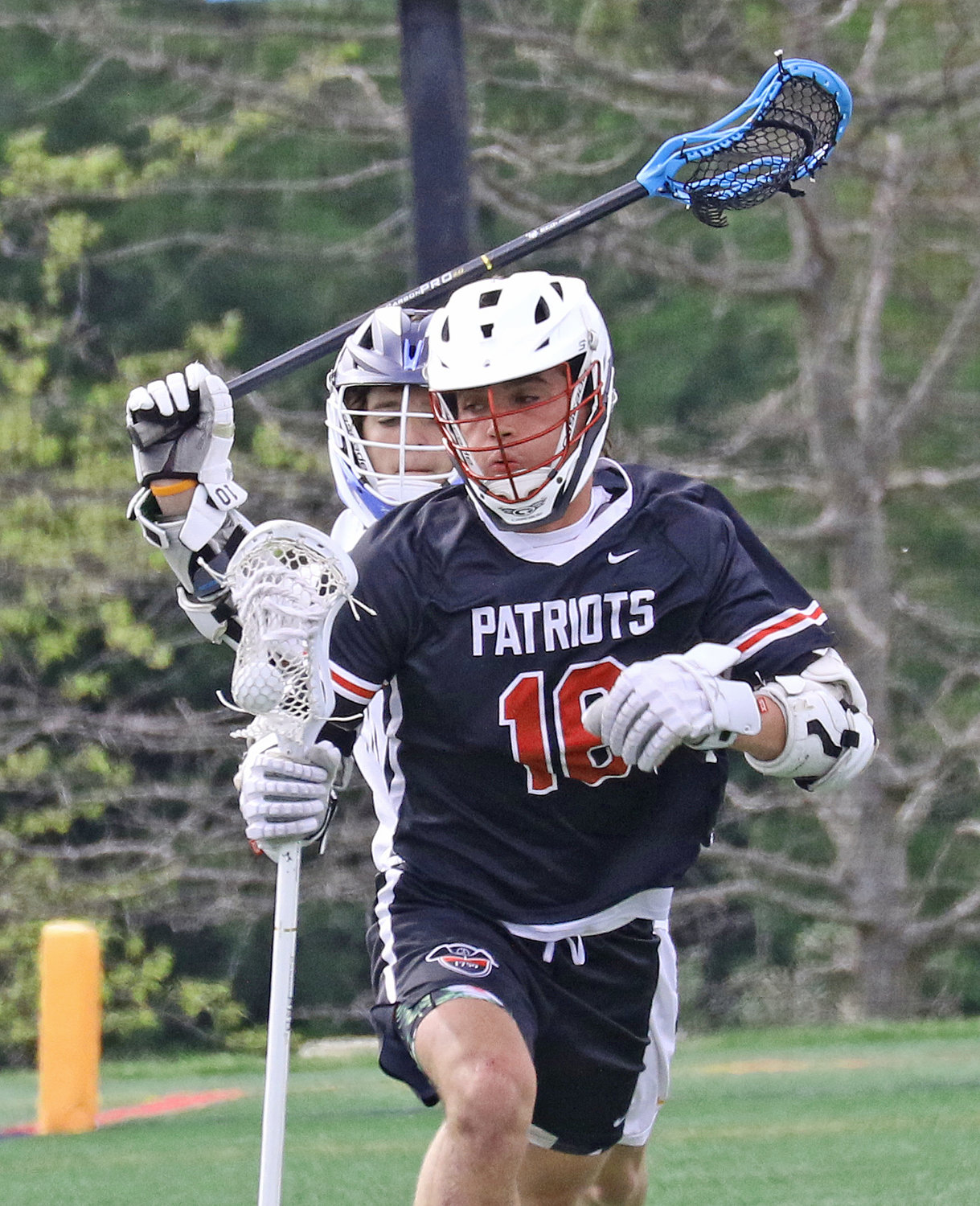 GA's Dean Shacklett (with ball) becomes aware of fellow junior Brendan Dundas (of SCH) winding up for a check. Photo by Tom Utescher 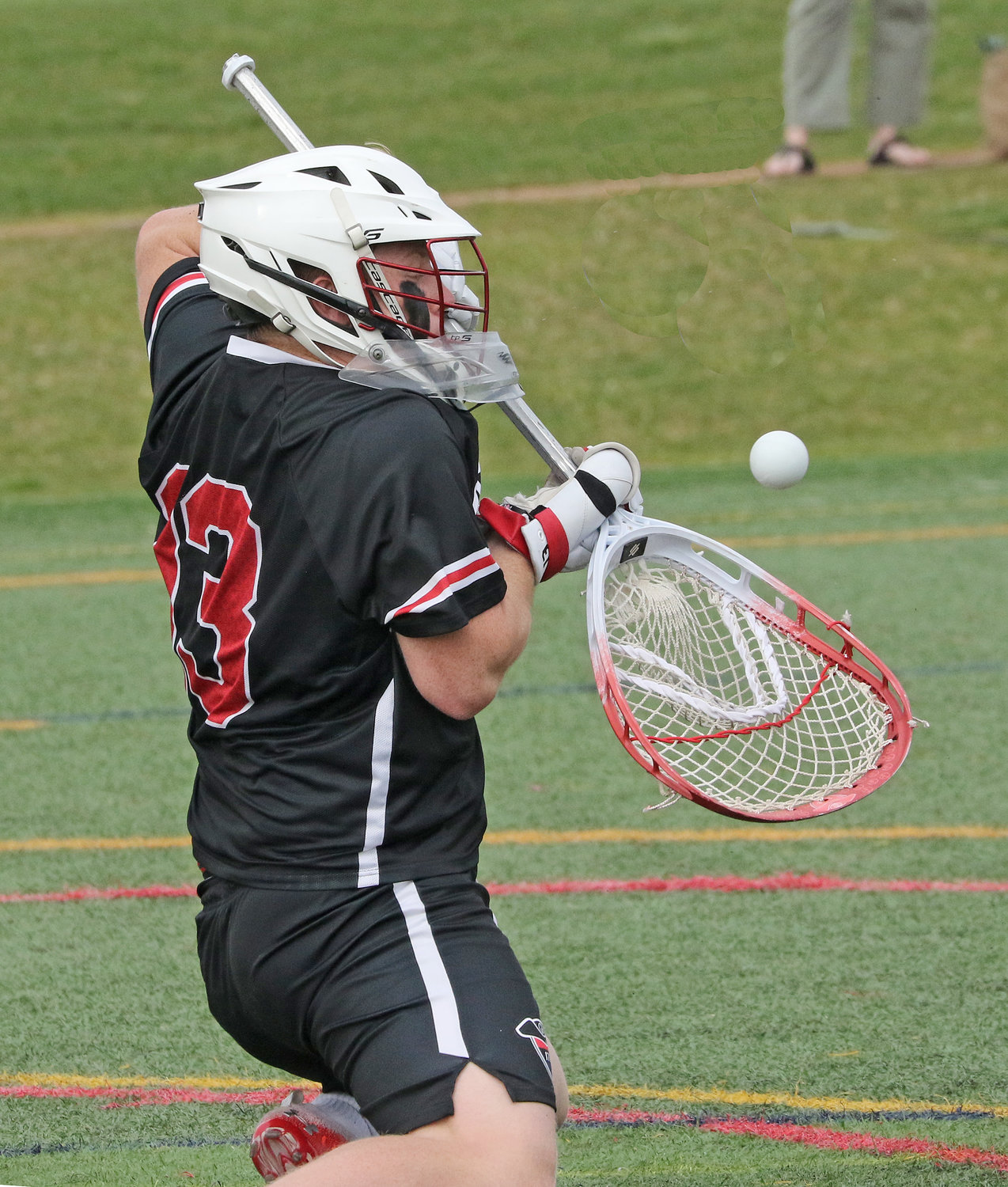 Patriots goalie Brendan Donnelly makes a save near the end of the first quarter. Photo by Tom Utescher 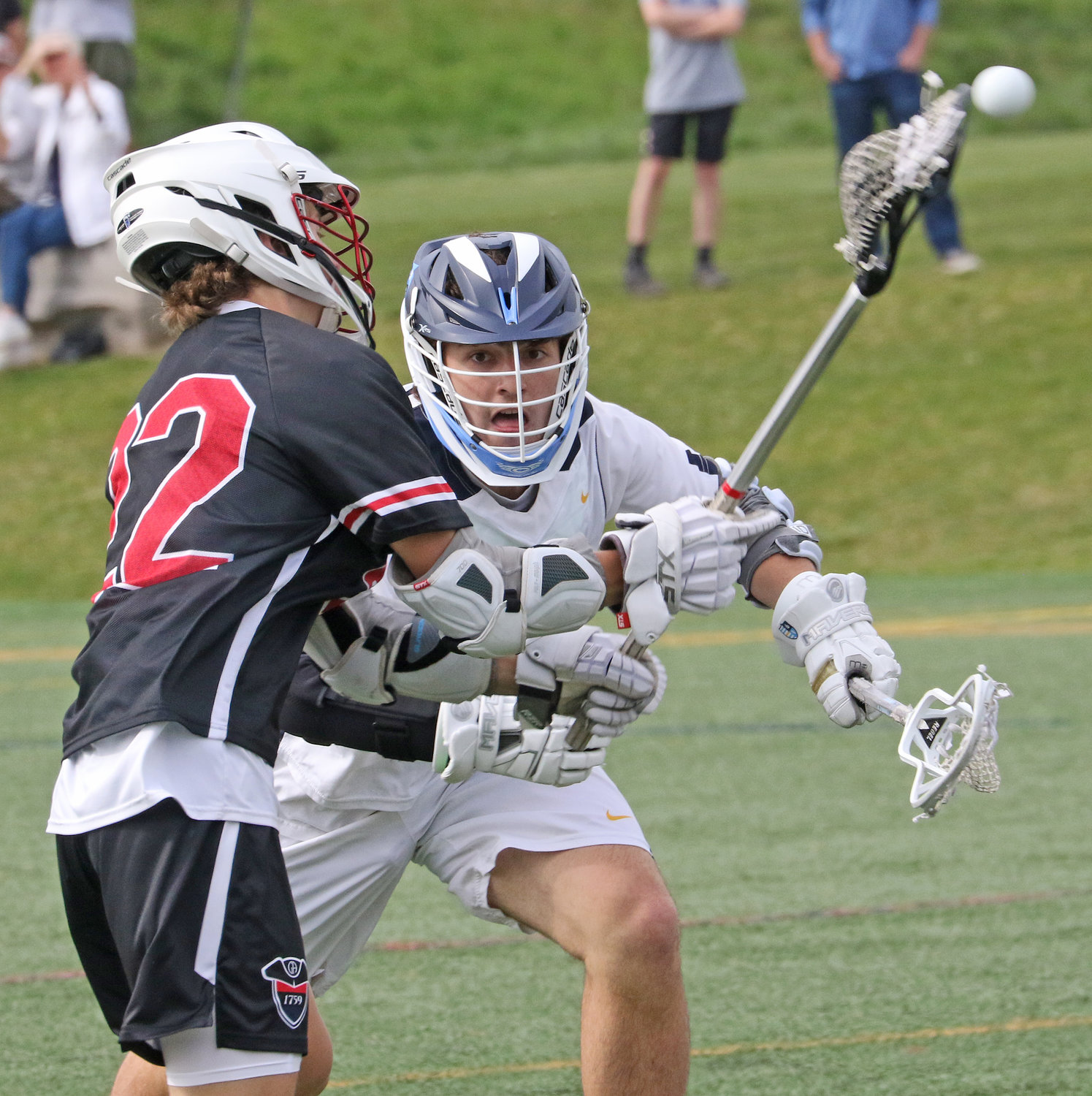 Scoring the first goal of the game, GA junior Josh Gibbs (foreground) gets off his shot just as SCH senior Luke Sonnet closes in. Photo by Tom Utescher 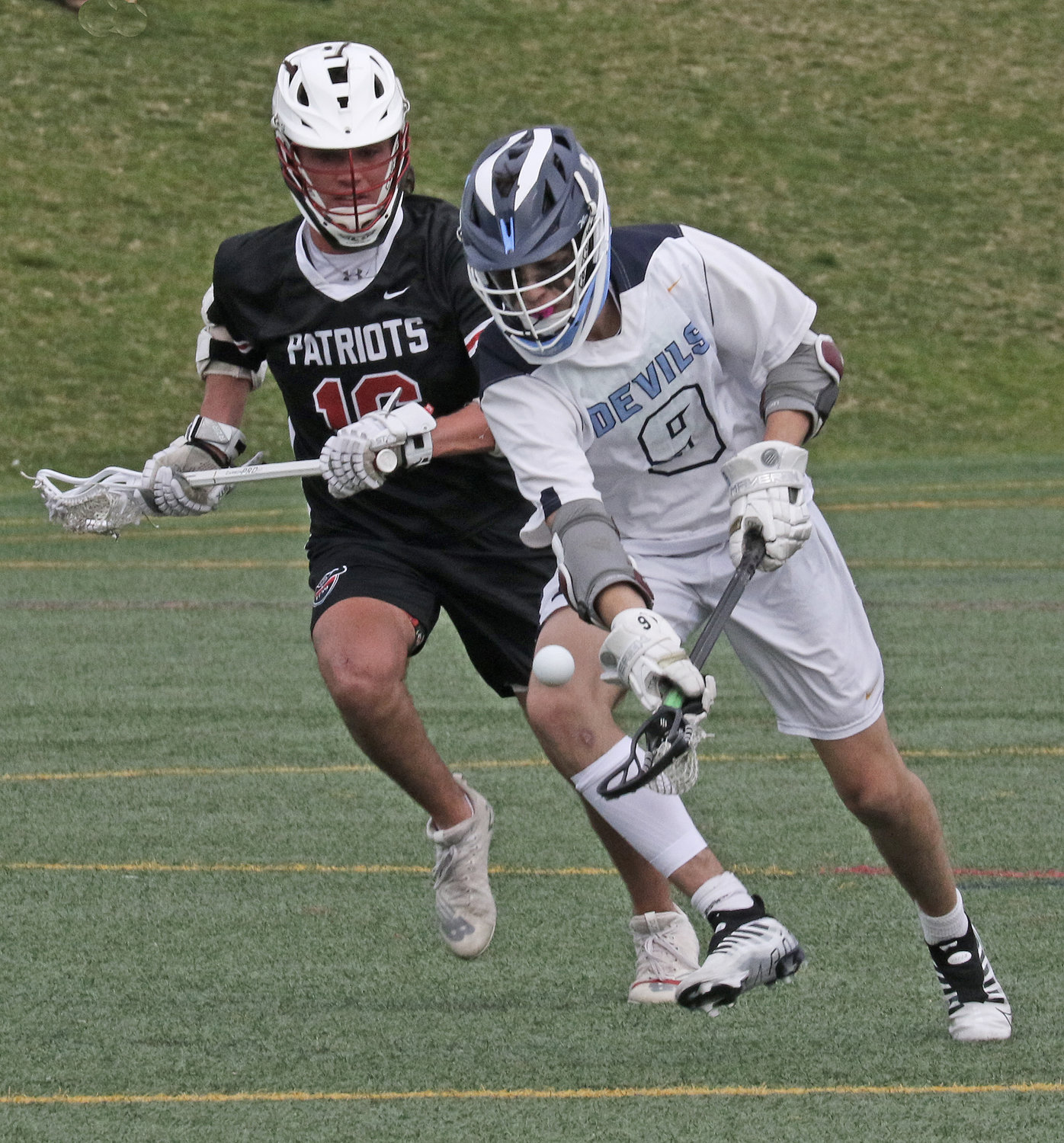 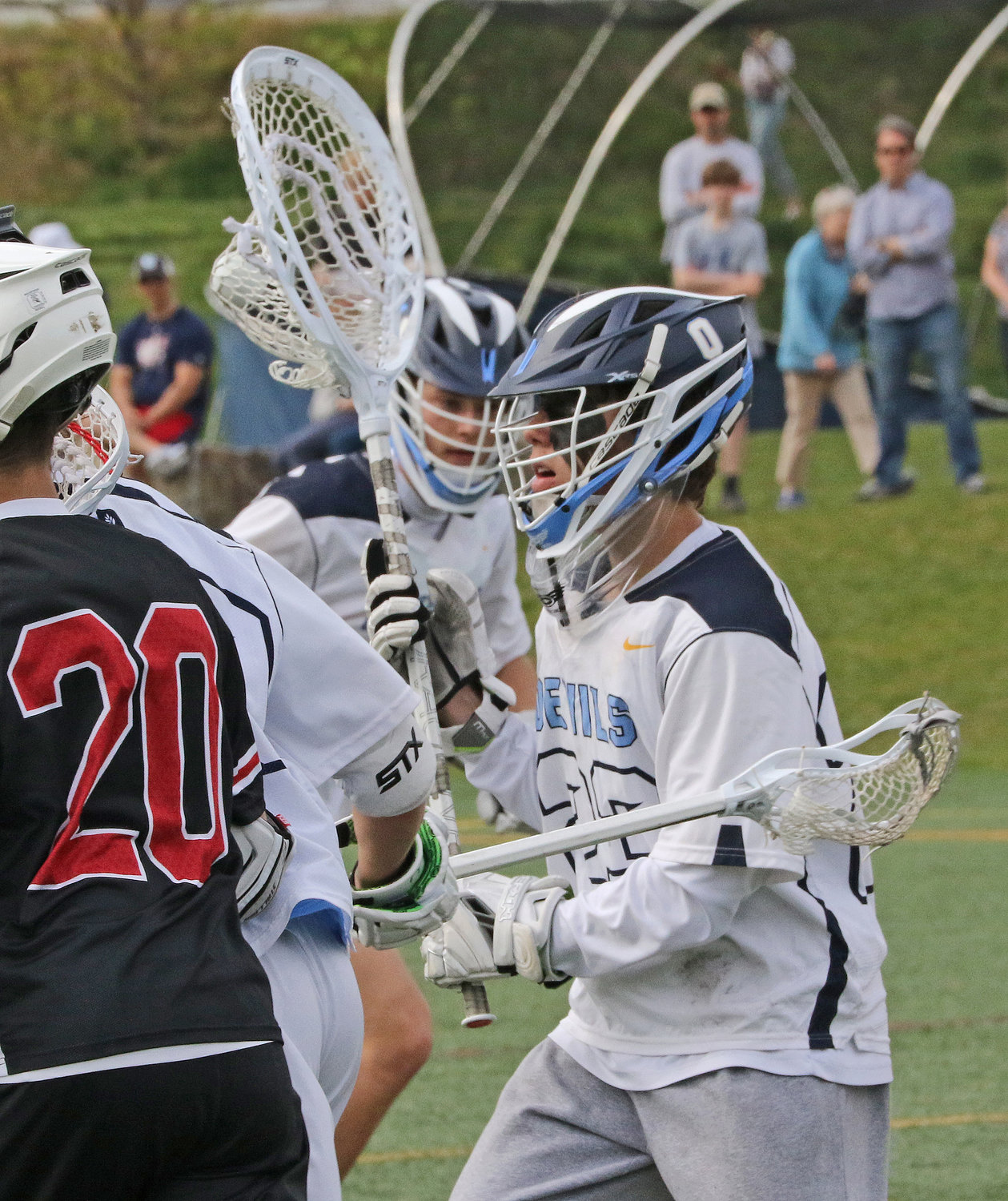 After making a save in the SCH goal, sophomore Hayes Schreiner looks to distribute the ball for a clear. Photo by Tom Utescher
Previous Next
Posted Friday, May 6, 2022 11:28 am
by Tom Utescher

GA's senior goalie, Brendan Donnelly, made 20 saves for the Pats, but six goals by junior Brendan Dundas helped propel the SCH Blue Devils to a 10-7 victory in the Inter-Ac League clash. With the win, SCH avenged an April 14 loss at GA (12-11) and improved to 2-5 in league play, matching the Patriots' Inter-Ac record.

After the score was tied at 6-6 early in the fourth quarter, SCH pulled away with a string of goals.

"We figured out their zone defense," noted Blue Devils head coach Brian Dougherty. "Blaze Riorden [the team's offensive coordinator] did a great job making some adjustments and moving some guys around. Also, Ross Prince [a sophomore] won almost all of the face-offs, so that gave us a lot of ball possession."

Speaking of his sophomore goalie, Hayes Schreiner (15 saves), the coach remarked, "Hayes played phenomenal; he's been a rock for us. Their guy, Donnelly, had a good game, too. This season, guys on our team have had their ups and downs, but Hayes and Dundas have been very consistent."

The Blue Devils had split their season series with Penn Charter, and GA defeated PC in late April, 7-4. So far, none of the three teams on this side of the Schuylkill have beaten any of the three Main Line squads.

If that pattern continues and if the PC Quakers win their rematch with Germantown Academy on May 13, the Blue Devils, Patriots, and Quakers would finish the regular season with identical Inter-Ac records as they vie for the last slot in the four-team league tournament.

"I don't even think about that because our mindset is to win some more games," said Coach Dougherty, who still had matches with Haverford, Episcopal, and Malvern coming up. "We're focusing on our own business."

On Tuesday junior Josh Gibbs got GA on the board first one minute and 37 seconds into the contest, firing an outside shot from the right side. His classmate Walker Schwartz gave the Pats a 2-0 lead, but late in the period SCH senior Drew Bown broke the ice for the home team with an assist from sophomore Alec Tulio.

Early in the second quarter, the Blue Devils' Dundas came from behind the goal cage on the left side to score twice in 66 seconds. Patriots senior John Luviano tied it up at 3-3 with just under seven minutes remaining in the first half, then GA went up 4-3 on a goal by senior Jack Liss with 5:38 to go in the half. It was last time the Patriots had the lead.

After a pair of markers moved SCH ahead for halftime, 5-4, it looked like the third quarter would end with that score still on the board as GA's Donnelly and SCH's Schreiner each stoned opposing attackmen.

With just 13 seconds left, Patriots junior Rocco Ippoldo found the SCH net from point-blank range off of a feed from Gibbs. The teams were even at 5-5 for the start of the final period.

On the opening face-off, Prince gobbled up the ball and dashed downfield to score with just seven seconds elapsed. Once the clock dropped below the 10-minute mark, Gibbs penetrated to score a tying goal (6-6) for GA.

Dundas countered just over a minute later, hitting a long shot from the left to move Springside Chestnut Hill ahead for good. The Devils then notched an insurance goal, making it 8-6 with 7:33 to go.

Over the next few minutes, the Patriots had chances to score, but they were unable to capitalize on a short man-up opportunity and they saw Schreiner turn aside shots by Schwartz and Ippoldo.

When SCH went up 9-6 with 3:30 left, Germantown pulled Donnelly in favor of an additional field player. Dundas was still able to score, coming from behind for a 10-6 tally with 3:02 on the clock.

When play restarted in the center circle, Prince won his 200th career face-off. With 1:02 remaining, Liss got GA back within three at 10-7, and that score stayed on the board through the final minute.

For the victors, Dundas' output was complemented by two goals from Tulio and one each from Bown and Prince. Gibbs and Liss each scored twice for GA, and there were single goals by Ippoldo, Luviano, and Schwartz.