This year, volunteers are hoping to raise enough funds to replace outdated and broken lights and missing signage around the Water Tower, and to refurbish the WWII War Memorial. 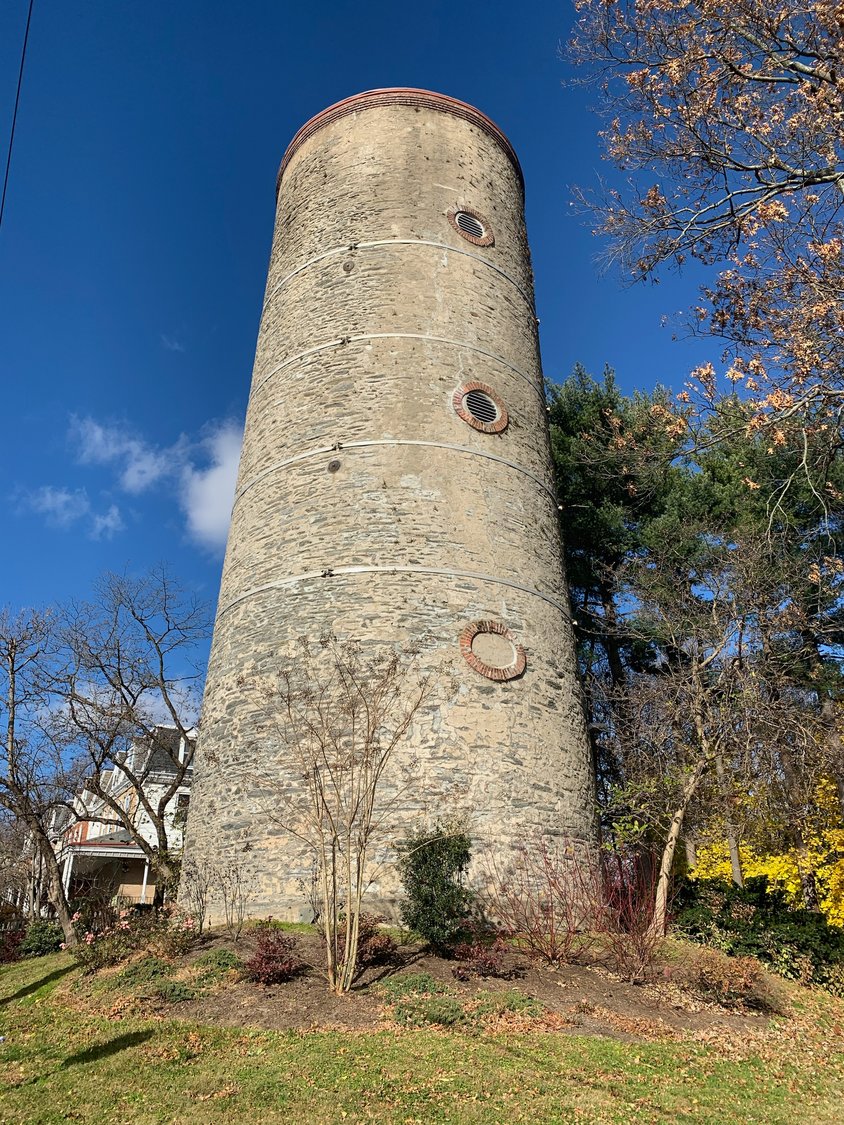 As 2022 begins a fundraising drive is being planned to design and implement improvements to the area surrounding the iconic Chestnut Hill Water Tower and adjacent WWII Memorial. “Light Up the Tower” will be the first fund raising project of the Water Tower Advisory Council since it became a registered 501(c)3 non-profit organization in 2020.  This effort is being guided by a master plan for the Water Tower Recreation Center which was developed in 2018 with community input and professional guidance. It outlines funding priorities for the Water Tower Recreation Center including a family play area at the entrance of the rec center, upgrades to the playing fields, a circuit walking path around the property, and improvements to the area around the landmark water tower.  A goal for this year is to raise enough funds to replace the outdated and broken lights and missing signage around the tower and to refurbish the WWII War Memorial. Meetings to plan these efforts are underway and community members are invited and encouraged to participate.

The role of the advisory council

The Water Tower Advisory Council is a nonprofit organization of volunteers who support the Water Tower Recreation Center. The council’s mission is to assist the recreation center with maintaining the interior and exterior, to support programming, and to communicate and collaborate with everyone using the facility, including near neighbors and residents of the broader Northwest Philadelphia community. The Council has sponsored volunteer days and neighborhood clean-ups and assisted with interior painting projects, lead pipe remediation and the new heating system. These efforts make a huge difference toward ensuring that the recreation center operates successfully and that programs continue.

The recreation center as community hub

The water tower serves hundreds of families on any given day, with programs including gymnastics, summer camps, volleyball, basketball, pickleball programs, Chestnut Hill Youth Sports, Girl Scouts, and daily after school programming. The Water Tower is home court or field to numerous schools in the area. The recreation center serves families of varied ethnic and economic backgrounds and provides computers for homework and a supervised and safe place to play.

A legacy of charitable giving and volunteerism

The Water Tower Recreation Center first became possible because of the vision of generous donors and a dedicated group of community members, who began their own fundraising effort in 1913 to create a safe haven for the children of Chestnut Hill. George Woodward had already donated the land and negotiated an agreement with the city that the site would be used as a playground “in perpetuity.” According to an article of the time which chronicled the committee’s  efforts, the new playground and “clubhouse” was planned to “be a source of pride to the neighborhood” and “will meet a very real need” for “many children have only the streets in which to play.”  The hope was to “preserve the old water tower as a feature of the landscape” and to  clear the reservoir (now the sports field) which “had become a miserable dumping ground” and a marsh covered with “green slime and swarms of mosquitoes.” In addition to donating the land, George and Gertrude Woodward ultimately agreed to fund the construction of the recreation center building in honor of their oldest son Henry (called Houston), a WWI hero, who was killed in 1918 on a flying mission over France.

On Thursday, May 12, the Advisory Council will host a dinner at the Cricket Club to kick off this fundraising effort. The evening will be filled with an array of engaging and entertaining activities.  Details of  the “Light Up the Tower'' project will be presented, and the Master Plan for improving the Water Tower Recreation Center will be on display. Corporate sponsors and donors will be introduced and a historian will share some fascinating photos and facts about Chestnut Hill during the time when the Water Tower was built and used. A highlight of the evening will be a show presenting the merchandise of local businesses. It will include fashionable clothing but also other practical, beautiful, and artistic items. Tickets are $100, $50 of which is a tax deductible donation to benefit the “Light up the Tower'' Project.  Tickets go on sale February 1 and Information needed to purchase will be available at the Water Tower Rec Center, at local businesses along the avenue, and on the advisory council website, wtrec.org.

How you can help

The Advisory Council is seeking volunteers to help with the tower project and community members to provide input. All are invited to the next Water Tower Advisory meeting on Wednesday, January 19 at 6:30 pm via Google Meet. If you are able to attend or to volunteer, please send an email to watertowerwtac@gmail.com and the meeting link and more information will be shared with you. With your help, the tradition of giving which made our rec center possible will continue for years into the future.

Light Up the Tower Project Committee