Bridget Irons, who has lived in Chestnut Hill for all of her 79 years, has lots of hobbies and interests. 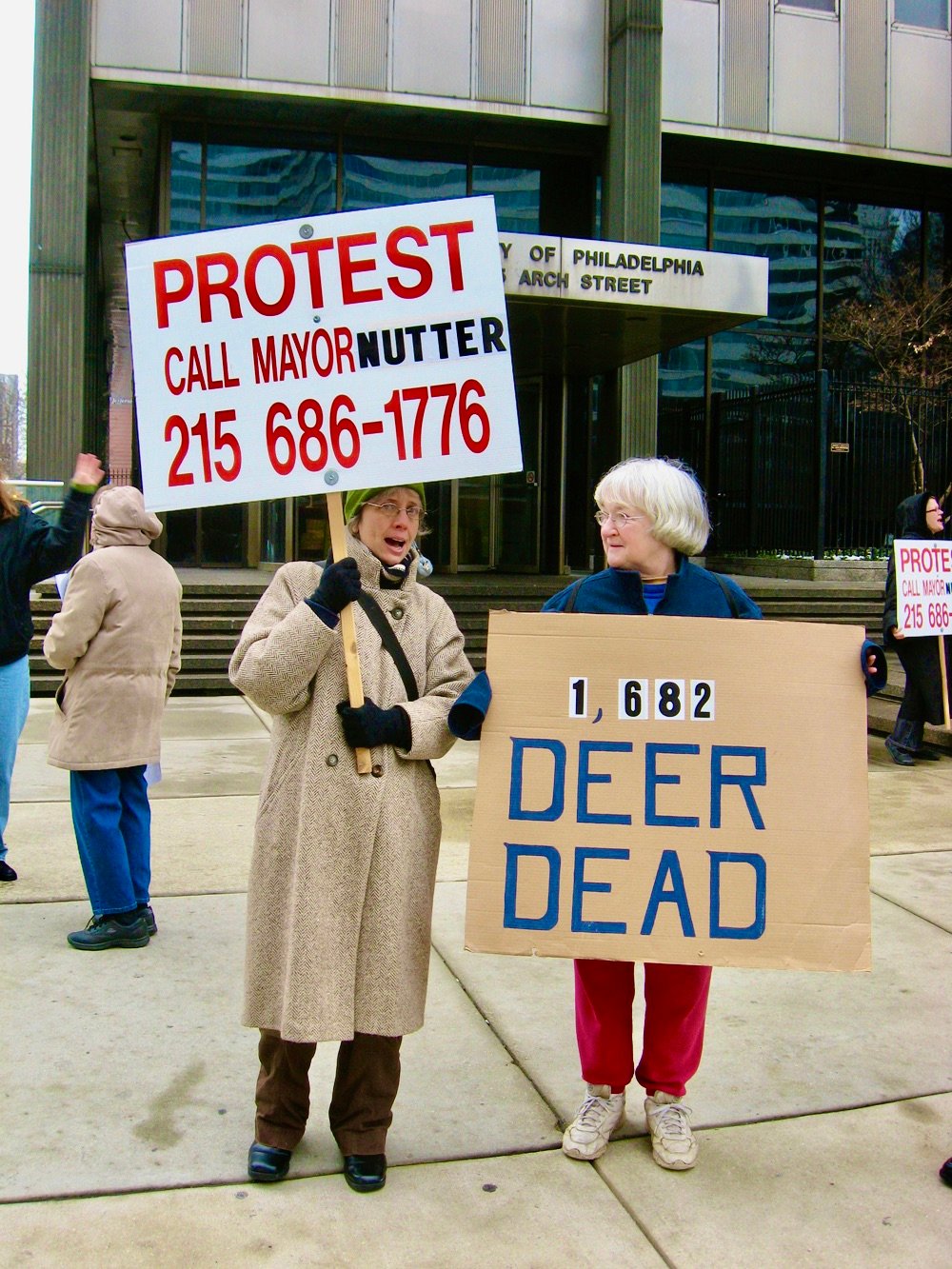 Bridget Irons (right) can be seen in center city protesting the annual deer kill with Zipora Schulz, of Germantown, a fellow member of Philadelphia Advocates for Deer.
Photo by Jim Harris 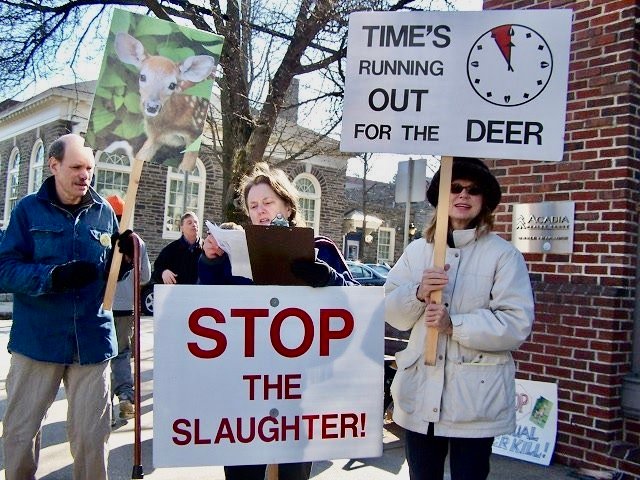 Chestnut Hill area residents Jay Roberts (from left), Mary Ann Baron and Christina Kobland protest the killing of deer that takes place in Wissahickon Park. The protest occurred at the corner of Gravers Lane and Germantown Avenue.
Previous Next
Posted Thursday, June 9, 2022 12:00 am
by Len Lear

Bridget Irons, who has lived in Chestnut Hill for all of her 79 years, has lots of hobbies and interests.

A former volunteer teacher's aide at Our Mother of Consolation School, which she herself attended, Bridget has been an active member of the Philadelphia Cactus & Succulent Society for 44 years. She has won numerous awards for succulent plants at the Philadelphia Flower Show and a Best of Show award several years ago for a succulent agave at the Harvest Show in Fairmount Park.

Irons has also had an abundance of compassion and empathy for those who are suffering ever since her 18-year-old brother was killed in a car accident on Wissahickon Avenue in West Mt. Airy in 1964. There was also the horrific accident under the bridge at the St. Martins Station in 1974, which left her then-10-year-old son with third degree electrical burns, requiring extensive medical treatment.

Friends will tell you that this mild-mannered flower lover, whose parents came to Philadelphia from Ireland and settled in Chestnut Hill, is a gentle, kind lady who never raises her voice - with one exception.

If there is one thing that she is more passionate about than flowers and plants, that raises her temperature into a fireball, it is the annual killing of deer in Wissahickon Park and other sections of Fairmount Park, which began in 1999.

Irons, a vegetarian for 25 years because “the horrors of factory farming are too much to bear,” became an animal rights activist in 1987 when she protested the use of animals at a local product testing facility.

Ever since then, she says, “It has been nonstop. I’ve been active in so many of the issues involving abuse and cruelty to animals, such as elephants in captivity. And over the years, we have provided homes for 18 cats, not all at one time.” (Irons and her husband, Charles, have been married for 61 years.)

Every year, they hire gunmen to put out bait and shoot the deer late at night with the aid of high-powered lights during the winter months. About 300 to 350 deer are killed each winter.

The killing has been controversial, prompting many protests and legal challenges, which have not been successful, but Philadelphia Advocates for Deer (PAD), of which Bridget and fellow Chestnut Hiller Mary Ann Baron are founders, continue the quixotic fight.

“This needless, revolting destruction of innocent life for 23 years now will continue indefinitely unless and until this issue can be dragged from the darkness and the self-perpetuating cycle of violence ends once and for all,” Irons said last week. “The public has accepted this ongoing slaughter because they’ve been duped.

“Deer live their lives according to their biological nature. They eat what’s necessary to sustain themselves, as do we humans. They balance themselves perfectly until we intrude, and we do, badly,” she continued. “We’re the overpopulated species. We’re the ones who cause car accidents. As far as human practices and interference, we refuse to accept culpability for our actions.”

According to Irons, deer represent a significant and previously unappreciated vector of seed dispersal across North America, including native species, helping birds, butterflies and other creatures. “Yale University studies have concluded that deer are not preventing forest regeneration nor diminishing forest regeneration capacity, contrary to what the killing advocates say,” she said.

According to Jim Harris of Germantown, a fellow activist, “I’ve known Bridget for more than 30 years, and I’ve never met anyone with more infectious, positive energy. Whether spending hours in the woods looking for evidence of deer kills or taking part in local seminars with experts on nonlethal deer control, she’s been endlessly creative in searching for new ways to appeal to peoples’ kindness and advocate for the park's deer.

“She keeps copious notes, newspaper articles and official records on local deer kills dating back decades,” he said. “In the often exasperating business of fighting City Hall or suffering the verbal slings and arrows of passersby at anti-kill protests, she’s met all the challenges with calm reason and tenacity. She’s been an inspiration for us all.”

More information at phillydeeradvocates.com. Len Lear can be reached at lenlear@chestnuthilllocal.com