Liner Notes: Bleached – much more than another punk rock record

by Pete Mazzaccaro Bleached: Don’t You Think You’ve Had Enough? Whenever I hear a band described as “punk rock,” I expect the worst. It’s not that I dislike the form. I’m just a skeptic. …

Liner Notes: Bleached – much more than another punk rock record 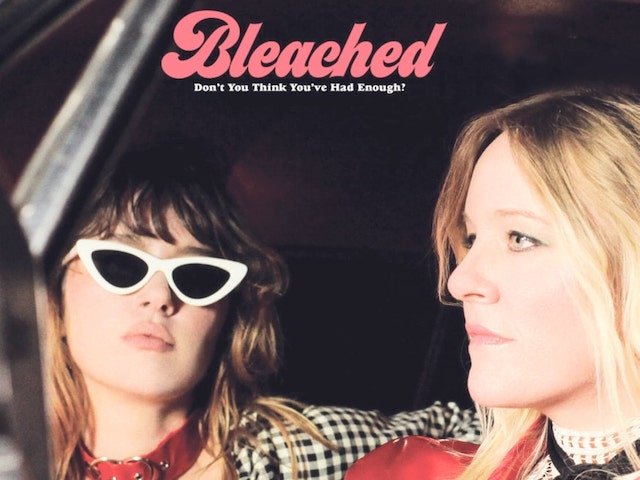 Whenever I hear a band described as “punk rock,” I expect the worst.

It’s not that I dislike the form. I’m just a skeptic. For every great band that has pushed the punk mantle forward – The Clash, Fugazi, The Minute Men, etc. – there are at least a dozen for which the term means “not trying hard,” “can’t actually tune these guitars” or “can’t write songs.” Johnny Ramone might have been famous for saying he never practiced the guitar, but the Ramones were dead serious about the well-crafted pop tune.

Bleached, an L.A. band started by sisters Jessica and Jennifer Clavin, is also described as punk. But like the Ramones, their definition of punk is what it meant in 1976: A stripped-down rock form that celebrates the simple virtues of song craft, like great melodies, memorable choruses and energy.

The band’s third record, “Don’t You Think You’ve Had Enough?” sounds like it came from that remarkable era of American rock music that followed the Ramones out of New York City in the late '70s and early '80s. There are pure guitar-driven power pop tunes that recall The Cars and The Runaways. There are dancey, dare I say, disco-like numbers that recall Blondie and a little bit of Talking Heads. On some of the brighter, peppier guitar songs, Jennifer’s voice recalls Belinda Carlisle’s The Go-Go’s days.

Almost every one of the 12 songs on “Don’t You Think You’ve Had Enough?” could be slipped into a soundtrack of a late ‘70s or early ‘80s period piece and sound right at home. It could be a mixtape from the era, touching on all the sounds you’d hear in the heyday of CBGBs. It’s of the time, but punk is not the label I would give it.

Bleached could be accused of not doing much in the way of invention. And that’s fair. There’s nothing revolutionary here – like The Clash or The Minute Men. But, unlike a lot of other punk pretenders, the Clavins have the songwriting and performance chops to be compelling. There’s something to be said for mining the sounds of a different era, particularly when you do it well.

“Don’t You Think You’ve Had Enough?” is not a great record, but it’s a very good one that pays tribute to an underrated era of sound and songwriting.

Liner Notes is a new, regular column on music from an admittedly Gen X point of view. The author’s actual music can be found at WinstonsDog.com. Feedback on the column can be sent to pete@chestnuthilllocal.com

Donate now to CH Local
The Latest
Crime Report: 2 retail thefts, 3 retail thefts and a stolen bracelet
Crime Report: 2 retail thefts, 3 retail thefts and a stolen bracelet The following crime report is for crimes reported in Chestnut Hill and Mt. Airy for the period between April 12 to April 18. …
The Township’s Workshop Meeting heats up over the Haws Lane Tract Development
The Springfield Township’s workshop meeting on April 12 took a decidedly heated turn when it came to discussing the latest proposal to develop an institutionally zoned tract of land at 380-402 …
Take on our biggest crises with 30 Million Solar Homes
Solar power can help tackle three interlocking crises our community and country are facing: economic downturn caused by COVID, impending climate disaster, and profound social injustice. We can take …