After 17 months of no live theater, and thousands of show people out of work, theater is gradually beginning to return to productions that people can attend in person rather than online. 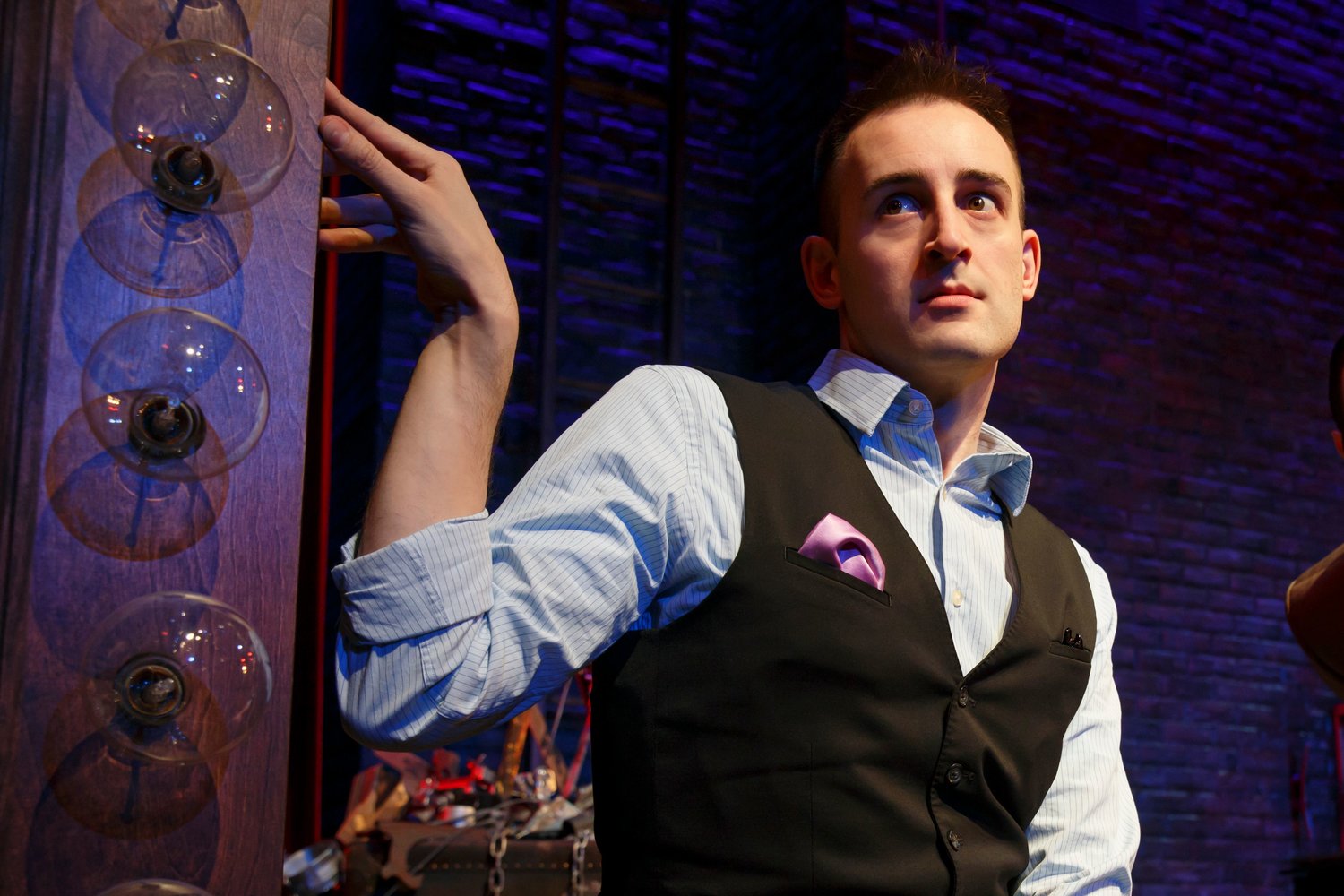 Joe Kinosian in “Murder for Two,” which opens at the Bristol Riverside Theatre Sept. 21.
Joan Marcus
Posted Friday, September 17, 2021 8:00 am
by Clark Groome

Irving Berlin famously wrote “There’s no business like show business, like no business I know. Everything about it is appealing. . . . There’s no people like show people. They smile when they are low.”

After 17 months of no live theater, and thousands of show people out of work, theater is gradually beginning to return to productions that people can attend in person rather than online.

Locally, many professional theaters are reopening their doors. It won’t happen all at once, and there will still be a lot of theater online for the next few months. It is, however, an encouraging time for Philadelphia-area theaters, artists, and audiences.

I’ve talked to 13 theaters, a small fraction of the area’s professional companies. For some, seasons have been set. For a few, plans are still being made. All of what follows is as accurate as possible as we go to press, but could change, depending on the state of the pandemic. All require audiences to wear masks and provide proof of vaccination, except where indicated.

Next up is the Walnut Street Theatre production of Larry Gallagher’s “Beehive – The ‘60s Musical,” which opens the theater’s five-show season Sept. 28 to Oct. 31. One of the effects the pandemic has had on the Walnut, according to Producing Artistic Director Bernard Havard, is to reduce the length of each show’s run by two weeks. Two of its productions – “Disney’s The Little Mermaid” (Nov. 16-Jan. 2. 2022) and the season-ending “On Your Feet” (April 12-May 29) – have two-week extensions built into their runs. (walnutstreettheatre.org – 215-574-3550)

The Wilma Theater opens its three-play season on Oct. 5 with “Minor Characters: Six Translations of Uncle Vanya at the Same Time.” The show runs through Oct. 24. The seating capacity of the theater has been reduced from 300 to 150. There will be a digital version, details of which are still being worked out. (wilmatheater.org – 215-546-7824)

“Hamilton” returns to the Academy of Music on Oct. 20, where it will play until Nov. 28. It is the first show in the 13-show Broadway Philadelphia Season at the Kimmel Cultural Campus. In addition to the shows at the Academy of Music, other productions will be mounted at the Forrest Theatre and the Merriam Theater. (kimmelculturalcampus.org – 215-893-1999)

Theatre Exile opens its three-play season Oct. 28 with the world premiere of Makasha Copeland’s “Extreme Home Makeover.” It will play through Nov. 21. (theatreexile.org – 215-218-4022)

From Nov. 11 to Dec. 5 “The Garbologists” by Lindsay Joelle will be the opening production of the three-play season at The Philadelphia Theatre Company. The productions all take place at PTC’s Suzanne Roberts Theatre where reduced capacity is planned for the mezzanine. (philadelphiatheatrecompany.org – 215-985-0420)

At Malvern’s People’s Light and Theatre Company, “A Christmas Carol” will run from Nov. 21 to Jan. 2, 2022. According to Rose Devine, People’s Light’s Director of Marketing and Communications, only 50% of the seats will be sold. While masks and vaccinations will be required for adults, kids under 12 must have proof of a negative COVID test. (peopleslight.org – 610-644-3500)

Tony Braithwaite and “a chorus of Act II favorites” will be on stage in “Really Good Things” from Nov. 30 to Dec. 30 at Ambler’s Act II Playhouse, the first offering of its five-play season. The theater has released the following statement: “Our staff is all fully vaccinated, we are employing recommended practices in our lobby, Box Office, administrative offices, and theatre, and we will definitely have a stated mask and vaccination requirement policy before the season starts. We are in the process of planning the best way to communicate this information to our patrons and guests."  (act2.org – 215-654-0200)

Arden will open Jan. 13 with the first production of its five-show season, Tennessee Williams’s “A Streetcar Named Desire,” which will run through Feb. 13. The mask and vaccination protocols are still to be determined.

Lantern plans to mount a Dec 3 to Dec. 30 production of local actor Tony Lawton’s adaptation of “Charles Dickens’ A Christmas Carol” at the Proscenium Theatre at the Drake. Its regular four-play season, back home at St. Stephen’s Theater, opens with Lynn Nottage’s “Fabulation, or the Re-Education of Undine,” a Philadelphia premiere that will run through Feb. 20. Masks will be required and proof of vaccination.

According to Producing Artistic Director Jen Childs, 1812 Productions has a goal to have something running in December but they just don’t know where it will be or when it will open. (1812productions.org – 215-592-9560)

Mt. Airy’s Quintessence Theatre Group is currently working on bringing its home, the Sedgwick Theater, into compliance with protocols required by the city, the CDC, and the theatrical unions. Artistic Director Alexander Burns is hoping that the work will be done in early 2022 and that a season might begin in February. In the meantime, they are planning to produce at other locations during the fall but the details are not yet set. (quintessencetheatre.org)

Norristown’s Theatre Horizon hopes to be back on stage sometime early next year. (theatrehorizon.org – 610-283-2230)

While the upcoming Philadelphia theater season is still a work in progress, the prospects for productions with live audiences is very positive.

So, to quote Mama Rose from Jule Styne and Stephen Sondheim’s magnificent “Gypsy”: “Curtain up! Light the lights! We got nothing to hit but the heights! … Everything’s coming up roses for me and for you!”