Countless art exhibits, plays, concerts, lectures, etc. have been cancelled since the coronavirus outbreak catastrophically changed life as we know it in mid-March, but one new extraordinary, maybe … 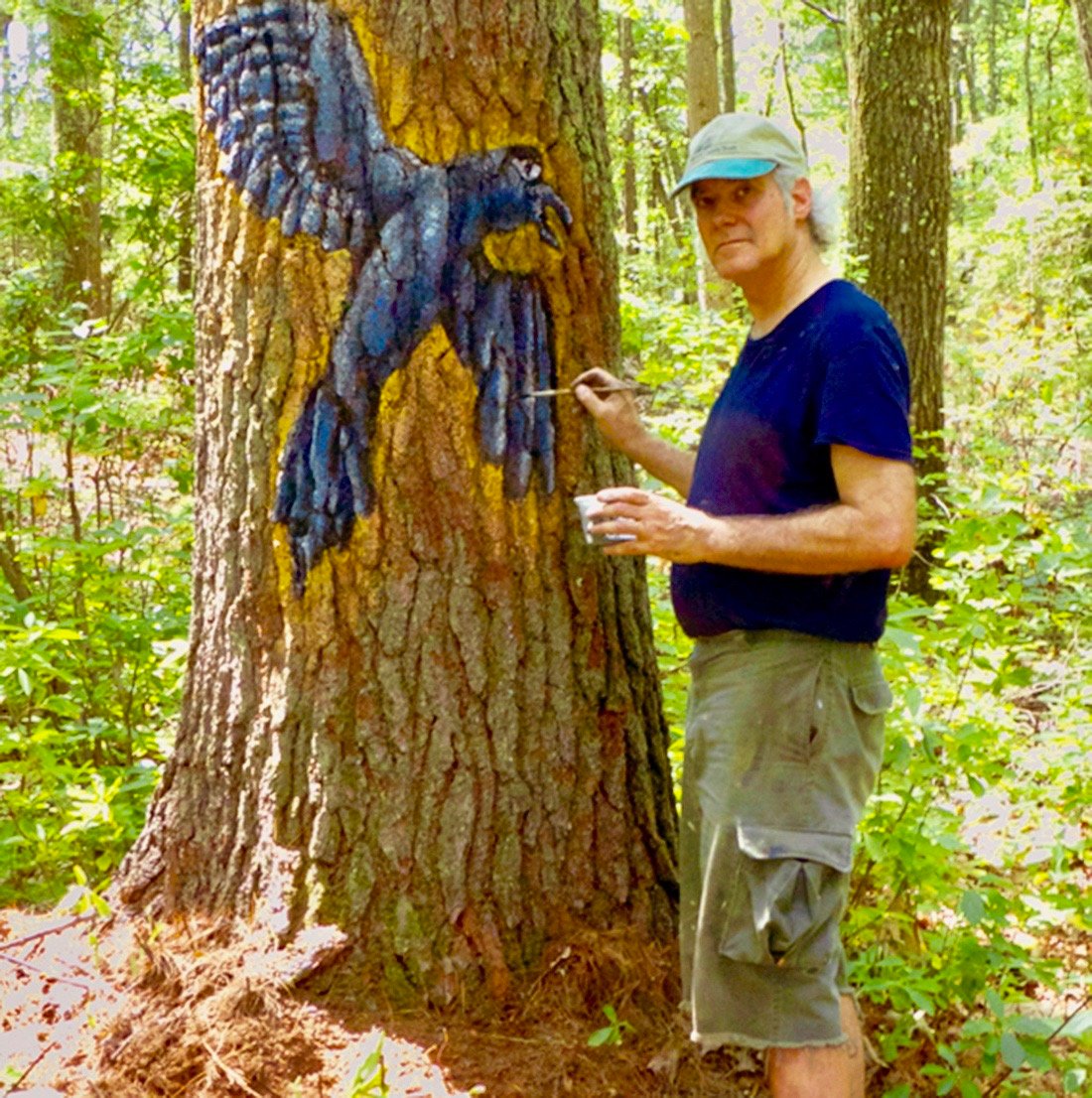 Metz painting a raven on a tree. The painting will last for a few years and slowly disappear.
Posted Friday, September 11, 2020 10:53 am
by Len Lear

Countless art exhibits, plays, concerts, lectures, etc. have been cancelled since the coronavirus outbreak catastrophically changed life as we know it in mid-March, but one new extraordinary, maybe even unique, art exhibit in Germantown has not been affected in the least by the pandemic and can now be enjoyed by both art and nature lovers in person.

You might even say that the work of artist Richard Metz, 61, a resident of Erdenheim for the past 20 years, has lots of bark as well as bite. That's because his new exhibit, “The Aviary,” consists of about 30 birds painted on trees in the Adventure Woods area of Awbury Arboretum in Germantown. The exhibit is now open to the public (in person, not Zoom) on weekends from 10 a.m. to 2 p.m.

Metz' tree paintings are made with natural non-toxic pigments and eggs. “I do not want anyone to get the idea that the paint is hurting the trees,” said Metz last week. “The paintings will gradually fade away for the next two to three years, depending on weather conditions. I did similar tree paintings there two years ago which are still visible, although somewhat faded.”

Metz, 61, has been showing his work in the Philadelphia and New York areas and beyond for more than 37 years. When he started doing tree paintings, Metz, who taught art at Abington High School for 29 years and Philly schools for two years before retiring last year, snuck into the woods in eastern Montgomery County and used colors he mixed himself. His goal was to “get closer to the process” used by the old masters he had “read so much about in art history books.” So he began using substances like ground charcoal, indigo or the spice turmeric (for a yellow tint) with eggs to create a colored liquid substance that would bind to the rough barky surface.

Metz regards his work as anti-materialist and anti-consumerist and to some extent a compelling critique of the function of art as a commodity since it is not possible to own these works of art. You are not likely to find a more committed, passionate environmentalist anywhere than Metz. He writes letters to newspapers, makes environmental art, matches in protests, donates money to environmental causes, votes, sign petitions, is a member of “Natural Lands” non-profits and attends community meetings in Springfield Township to make his voice heard.

“But all of this has had little effect,” he concedes, “in stopping or slowing down the destruction machine that is eating up our forests and wild green spaces. There needs to be a moratorium on new construction for communities to pause and consider the best course forward. Local communities are at a loss because of the way permits, zoning laws and community input is constructed.

“The larger problem is community values versus the capitalist system. When wooded land can be bought and all the trees cut down, its not a sustainable way forward. But who's to say how one's land can be used or whom it can be sold to? The community must be able to protect itself, but politicians are lobbied by the powerful construction industry and other anti-environmental corporations, and their money influences lawmakers to ignore community interests and pass laws to limit the power of local communities.

“One habit of this country has been to cut down the trees. The forests were seen as endless, but now 350 years after the massive tree cutting began, we have new information. The forests are necessary for human survival in that they provide oxygen, combat the effects of climate change, provide necessary ecosystems for wildlife and contribute to the physical and emotional well being for people.

“And the forests are shrinking. New research has shown that vast underground networks allow trees to communicate with each other. Trees use smell to warn other trees of insect invasions. We are beginning to become aware that trees are remarkable, intelligent life forms. To simply cut them down as lumber or for unnecessary housing needs to reconsidered. If it is sadly left to the market to determine how land will be used, there is in my opinion no hope for that future.”

Of course, developers, building trades unions and others would argue that new construction is constantly needed to buttress the economy. But Metz argues, “Why aren’t there more rehabbing jobs in North and West Philadelphia instead of new homes and condos being built in Fishtown, Mt. Airy and Center City? The new construction tax abatement in the city is not helping.

“It’s not fair to ask construction workers to give up their jobs because destroying forests and farmland is not in the best long-term interests of the community, but who takes responsibility for the destruction caused by housing developments? The inquirer gave the Toll Brothers development company an award this year.”