Fink's newest effort is “Descent into Darkness, A Fight Against Terror,” in which an angry father sets out to get revenge against the person responsible for duping his daughter into making a pornographic film. 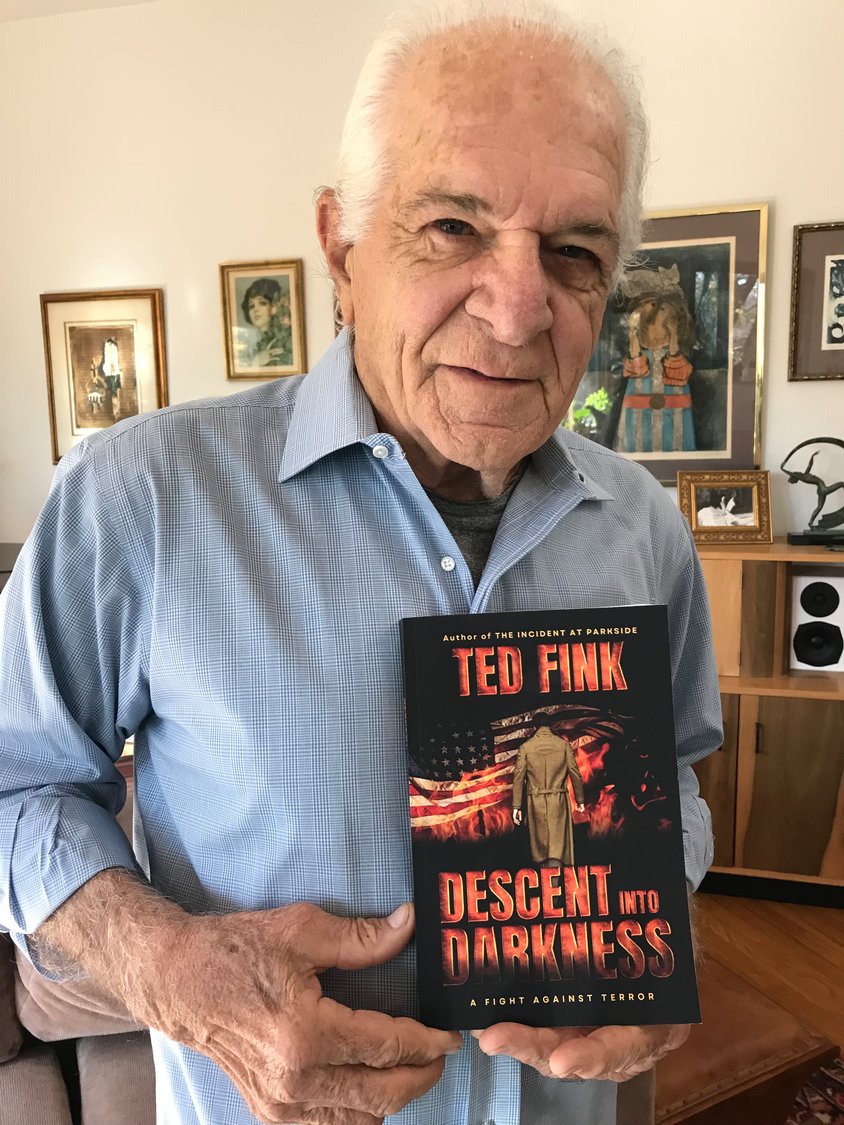 Chestnut Hill author Ted Fink holds a copy of “Descent into Darkness, A Fight Against Terror,” his sixth novel, released Sept. 30, a story about an angry father who sets out to get revenge on the person responsible for harming his daughter.
Posted Thursday, December 8, 2022 12:00 am
by Len Lear

Because of my job, I have read countless novels by local self-published authors. Two that I have greatly enjoyed were “The Incident at Parkside,” about an elderly Jewish man who moves back to an all-Black neighborhood in West Philadelphia, and “Pebbles in the Fire,” about a young boy who was sold into slavery in Nicaragua at the age of 5 and a young American girl taken in by a band of rebels after her parents were killed by federal forces.

Both were written by Ted Fink, a singer songwriter, professional storyteller, former restaurateur and entrepreneur who has lived in Chestnut Hill for 39 years. In both previous novels (he has written several others as well), Fink had me turning pages because of his mastery at plotting and dialogue.

Fink's newest effort, just released Sept. 30, is “Descent into Darkness, A Fight Against Terror,” in which an angry father sets out to get revenge against the person responsible for duping his daughter into making a pornographic film without her knowledge and then blasting it all over social media, where her friends and family members see it.

How did the idea for such a sordid scenario come to Fink? “In 1974,” he answered, “the infamous Ira Einhorn told me that he had infiltrated a group that was thinking about blowing up bridges in Philadelphia to create chaos and bring the many scattered militant groups together. Then, once Trump was elected and there was a rise of hate groups, I thought about what Einhorn had told me, and the story was born. I thought about it for a long time and finally started doing the basic research in 2018.”

Is the book loosely based on real people and/or real incidents? “No,” Fink said. “It’s total fiction. Once Trump was elected and we started to see the rise of hate groups, I started to focus the story on militant white nationalist organizations.”

Fink’s family moved to West Oak Lane when he was 12. He went to Wagner Junior High School, Germantown High, Temple University and Miami University. He earned a bachelor’s degree in creative writing and a master's degree in educational administration.

He also has an extensive restaurant background. Every summer starting in 1953 he worked as a busboy at a 20-room hotel in Atlantic City, and starting at age 16 he worked weekends as a banquet waiter in Philadelphia hotels — the Bellevue, Warwick and Sheraton. “In 1958,” he said, “I was making more money as a banquet waiter on weekends than my father was making working 40 hours a week as an electrician.”

In 1964, Fink built The Rib Ranch Restaurant on North 22nd Street, three blocks from the old Connie Mack Stadium, where the Phillies played their games before Veterans Stadium was built. He also took over La Terrasse on Penn's campus in 1972, and in 1989 he opened Crickets, a rock 'n' roll nightclub, in Woodlyn, Delaware County.

Many people in Northwest Philly also know Fink as a singer/songwriter and storyteller. He has written and recorded many songs and created and hosted the now-defunct Chestnut Hill Singer/Songwriter Slam for four years. He has played theaters, clubs, private parties and cafes. A few years ago he performed a one-man show at Stagecrafters in Chestnut Hill for two nights that drew more than 300 people. He has been a professional storyteller since 1981. His first tale was an eight-minute story about drug addiction in rhyme called “Lost In The Ooze.”

Fink, 82, literally built the Chestnut Hill house he and his wife of 52 years, Ruth, have lived in for almost four decades. However, he grew up in Parkside, a section of West Philadelphia. “My mother had a little corner store, a lady’s shop at 42nd and Parkside,” Fink said. “Our family lived in the back of the store. I only have good memories of those days. Everybody knew my name. I couldn’t act out. Shouts of ‘Teddy, I’ll tell your mother!’ kept me in line. We lived in that neighborhood until I was 12.”

For more information, visit tedfink.com. Len Lear can be reached at lenlear@chestnuthilllocal.com