I always love to report about new restaurant openings, especially after a long year where so many restaurants shut their ovens, bars and lights, never to reopen. 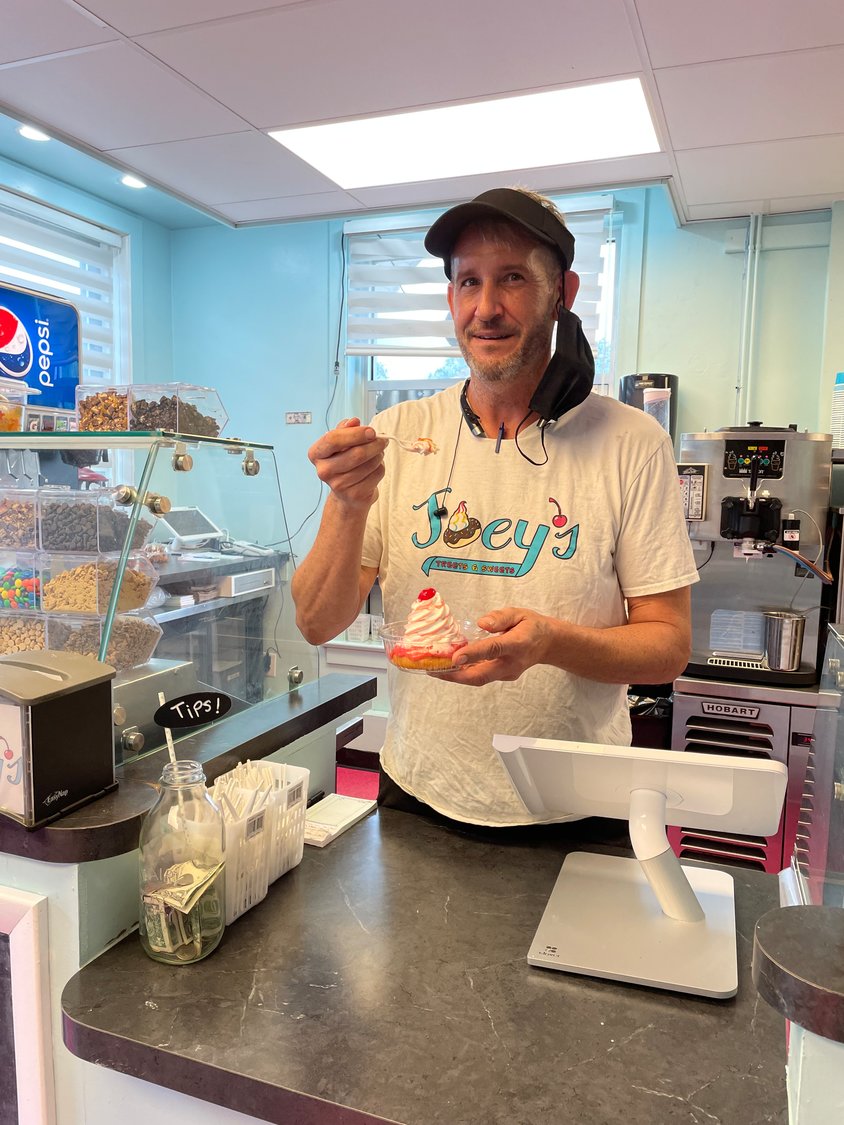 Joey’s Treets and Sweets, a soft ice cream parlor and dessert spot at 8 Allison Road, headed by none other than Joe Randa, owner of Amici Vicinato,“friend of the neighborhood.” He’s owned the pizza place for 17 years, formerly named Tonelli’s. 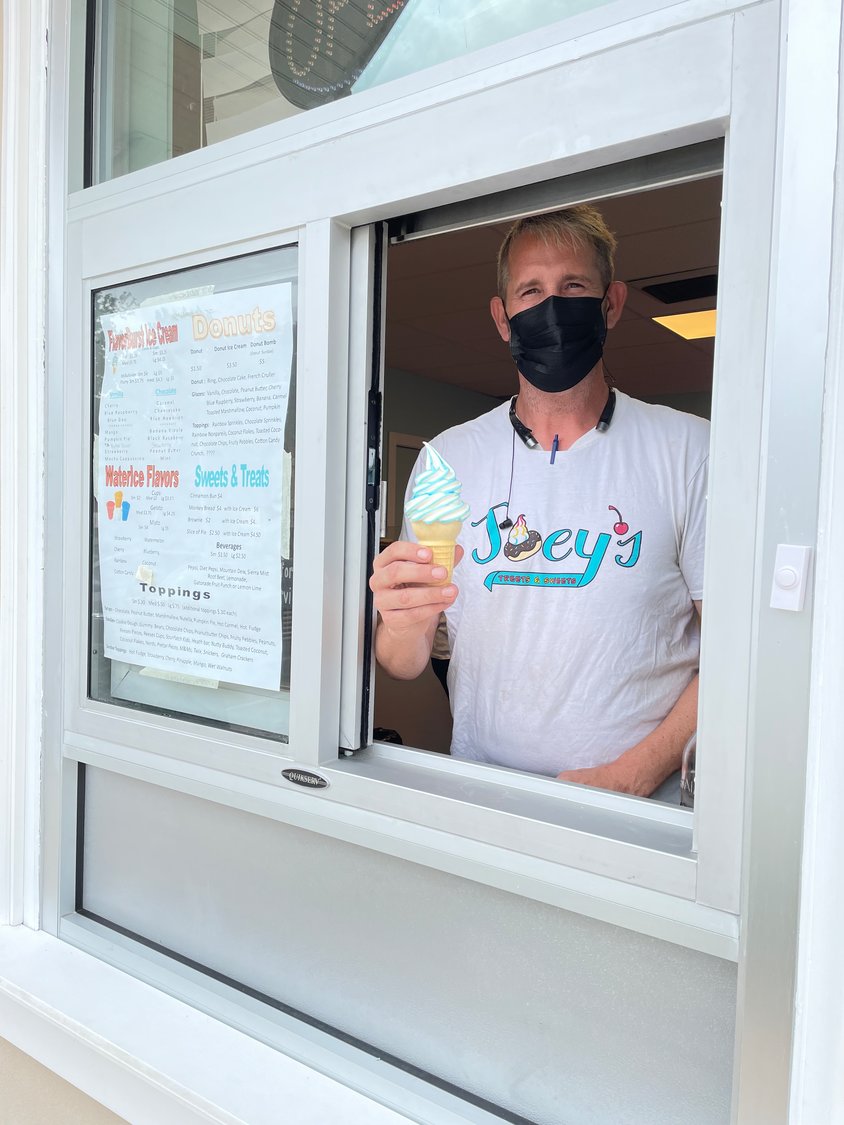 Joe Randa just opened the doors at Joey’s Treets and Sweets in Oreland
Previous Next
Posted Wednesday, October 20, 2021 8:00 am
by April Lisante

I always love to report about new restaurant openings, especially after a long year where so many restaurants shut their ovens, bars and lights, never to reopen.

Lately, it has been good to see area eateries coming back to life, and to see new places opening their doors for the first time. The new Terra Nova Woodfired Pizza has been pumping out gourmet, brick-oven pizzas over on Willow Grove Avenue in Wyndmoor for the past few weeks, the latest addition to the bustling corridor where Enza Pizzeria, Locals Coffee & Eatery and Captain Andy’s Market already have made their mark.

And just last week, I reported about Adelinas, the new Italian restaurant coming to Germantown Avenue in Chestnut Hill in November, at the corner spot where Paris Bistro and Jazz Café sat for six years before closing during pandemic shutdowns in March 16, 2020, never to reopen.

This week, I’m happy to report that Oreland just had a soft opening (no pun intended) for Joey’s Treets and Sweets, a soft ice cream parlor and dessert spot at 8 Allison Road, headed by none other than Joe Randa, owner of the formerly named Tonelli’s Pizza on Germantown Pike in Lafayette Hill. He renamed Tonelli’s about a year and a half ago, calling it Amici Vicinato, “friend of the neighborhood.” In all, he’s owned the pizza place for 17 years.

“I started working [in the business] at 15 in an ice cream shop,” Randa said. “I’m kind of getting back to doing what I did as a kid.”

The shop was slated to open in May, but Covid-related supply chain and construction issues delayed the debut until this week. Situated a few doors down from Oreland Pizza, the shop is the former site of a barber shop, which relocated across the way. With no other ice cream joints along the shopping strip, it no doubt will be a beacon for the locals who walk Allison Road – especially all the kids who hang out at the Connor James McKelvie playground and basketball courts directly behind the ice cream shop.

“I liked the spot because I liked how the park is right there and it's where everyone walks around and it's the town center,” Randa said.

The shop is a cheery powder blue with hot pink tile floors and fancy doughnut printed rugs. He’s got cups and cones and all the toppings – including gummy bears for sundaes.

But an especially genius move on Randa’s part was to put a sliding walk-up window a stone’s throw from the basketball courts, where kids could order and have their ice cream cones passed right to them.

“We figured that with Covid, people would be more comfortable coming to the window,” he said.

The cool thing about Joey’s is that there’s really nothing like it in the immediate area. Randa brought in high-tech equipment to serve up Flavor Burst ice cream, which uses a vanilla or chocolate base and literally infuses swirls of flavors into the soft serve treats. Customers can choose from 19 flavors and have them mixed with a fancy computerized system to come up with their daily cravings, like vanilla with pumpkin pie, or chocolate with cheesecake, caramel, or peanut butter. He also has water ice.

Oh, and here’s the best part: He’ll be open year-round because he doesn’t just serve ice cream but also monkey bread, homemade hot glazed doughnuts, cinnamon buns and brownies, all with the option to top them with ice cream. The doughnuts are made on-site and the glaze is house-made as well. Both are served warm. The monkey bread is his mom’s recipe.

“I grew up on that monkey bread,” he laughed.

He also will sell slices of pies made by a non-profit organization that trains and employs special-needs adults. Right now, you can get pie by the slice with ice cream, but Randa is mulling a winter option as well.

“We might sell whole pies at the holidays,” he added.

As if that’s not enough, customers can wash down all this dessert with coffee and hot chocolate – if they aren’t already in a major sugar coma.

One of the most important parts of Thanksgiving: the holiday table