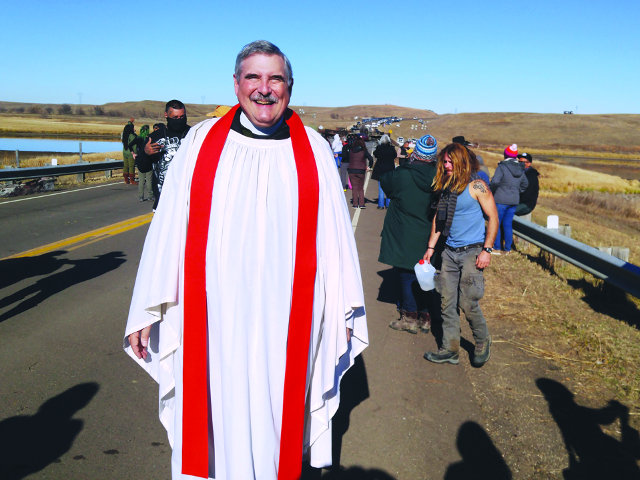 You’ve likely read quite a bit about protests of the plans to build Dakota Access Pipeline in North Dakota. Violent clashes between protestors, police and other security personal have been a regular occurrence since early fall. Chestnut Hill minister Cliff Cutler of St. Paul’s Episcopal Church recently returned from a peace mission at the site of the protests. The following is his account of the time he spent there.

Members of the Standing Rock Sioux Tribe asked for clergy to come to their support and calm the tensions. They are protecting the water of the Missouri River (and their water supply) from the Dakota Access Pipeline that will move 470,000 barrels of oil a day under the river.

The Rev. John Floberg, Canon Missioner for the Episcopal Church on the Standing Rock Reservation in North Dakota, put out the call on Oct. 22, hoping for 100 clergy to respond. The night of Nov. 2, as we gathered for the first time in the Cannon Ball, N.D., gymnasium we numbered more than 500, from 25 faith traditions, 45 states and four countries.

The town of Cannon Ball on the Standing Rock Reservation is familiar to us at Saint Paul’s Church. We have been going there with our young people for nearly 10 years. We have friends among the Sioux tribe and among the clergy both native and non-native.

Morton County law enforcement has been using military force against unarmed, prayerful protestors who call themselves water protectors. The path of the Dakota Access Pipeline was originally to cross the Missouri river above the city of Bismarck. When city officials rejected the plan, builders of the pipeline then rerouted the path southward within a mile of the Standing Rock Reservation. This step is perceived as one more in a long line of attacks on the Sioux people.

Two camps arose to stop the project. The first was the Sacred Stone Camp. A second camp of water protectors was established on what the government calls federal land outside the reservation. It is called Oceti Sakowin. The name means the Seven Council Fires. It is the first time in 150 years that all seven Sioux tribes have gathered together in one place.

Earlier on Wednesday, law enforcement shot “non-lethal” bullets at point blank range and maced demonstrators who were attempting to prevent destruction of a gravesite of two women, Alma Pekin and Matilda Gain. The pipeline company had unearthed another sacred site two weeks before and did not inform the North Dakota Public Service Commission for 10 days.

That same afternoon Father Floberg drove his pickup to the place where we would witness for peace the next day. He had a very sobering walk across broken glass and past burned out vehicles.

“I walked across a lot debris that was in the road,” he said, “then I had to climb over a guard rail, and once I was on the other side I had to put my hands in the air and walk the rest of the way because of the police unit standing guard there.

“Police said,‘What do you want?’ And I said, ‘I need to talk with you.’ Five officers came out, one with an M-16 assault weapon. He was guarding the other ones.”

Floberg told the police officers that his group would be burning copies of the Doctrine of Discovery at the Oceti Sakowin Camp, then forming a large healing circle (called the Niobrara Circle) on the south side of the Backwater Bridge.

He said, “You are protecting a pipeline that is put in place because of church doctrine, and we are here to say that we were wrong.”

One of the speakers in the gym that night was Jennifer Martel of Sitting Bull College. She began by asking simply, “Who are you?” Then she repeated, “Who are you?” As a western, non-native person I would likely answer with my name. Who are you? Then I might tell her what I do. That didn’t tell her much. She wanted to know of my family. Who are the people that I come from? What is my history? Who is it that taught you your faith stories? What values did they pass along that have guided you?

Now I am aware that my forbears had faults just like I do. I know of one who fostered the country’s western expansion which, intentionally or not, happened at the expense of native people. This is who I am, sitting in a gym on the Standing Rock Reservation. I’m a bit conflicted.

Then Jennifer Martel says, “Be proud of where you come from. Native or non-native, they are your people. They have made you who you are.”

Another native speaker, Lila June Davidson, said, “I often say to my contemporaries that we each have a job to do. The descendants of so-called colonists have a job to acknowledge the atrocity. And indigenous peoples we have a job to do too and that job is to forgive. A lot of our people native and non-native who have been in this camp have been very severely wounded both spiritually and physically. There is so much anger … for the past few months, really atrocious civil and human rights violations (have taken place) and all throughout the world we’ve been so angry and … hatred … was demonstrated … not only by police but also in return by water protectors. It has created hatred around the world.

“So on Sunday we’re going to be walking in Mandan from the park to the police station. And when we get to the police station we are going to be doing prayers asking for the ability to forgive, and this isn’t just forgiving what’s happened this past week, this is forgiving what’s happened for the last 500 years and really acknowledging that our European brothers and sisters didn’t just wake up one day and want to colonize something.  This has roots in thousands of years of oppression of indigenous European culture which was slaughtered the same way that our cultures were and so we recognize that this cycle of violence will only end when we forgive … And we are just going to set the record straight about what true indigenousness is about, and it really is about what the Lakota call woakiktunze, forgiveness, but it also isn’t saying I forgive you but it’s inviting everyone to forgive each other.”

At morning worship at St. James Church on Thursday, Deacon Brandon Mauai, of the Standing Rock Tribe, told this story:

“A couple of weeks ago, just right when they established the barricade up north one of my children -- he is 8 years old, you can imagine the questions that come into his head. And we’re going through the barricade and he is asking, ‘Why are they stopping us? Why are they stopping us?’ “Another child one of his classmates, we drove by there and he said, ‘Are we in civil war?’ Because there are military there and you pass through and they are armed. Now you tell me how do you explain to an 8 year old what is going on? How do you explain to an 8 year old that there is pipeline being built near our water intake, the water that we drink, and that we are protecting the water? How do you explain to them that this is the reaction we get from our government? It is difficult. It is really difficult.”

After worship, 524 of us went to the Oceti Sakowin camp. A police helicopter circled overhead. Our first act was to burn copies of the Doctrine of Discovery, a 15th century papal document that legalized the taking of land from indigenous peoples. This had a very healing affect on one observer.

“Very powerful,” he said. “We’re witnessing in the history of the United States that the church did recognize the atrocities down there that happened to indigenous people.The church admitted that it was wrong.”

After this burning we went as a group, purified by the smoke of burning sage, to the Backwater Bridge where the police guarded a barricade. We formed a circle that went up a hill and across the road. The same observer commented: “Today is one of the largest healing circles you are going to be witnessing across the country, the healing of both native and non-native relatives here.”

The Rev. E. Clifford Cutler is the rector of St. Paul’s Episcopal Church in Chestnut Hill.