In his latest book, “A Course Called America” (Avid Press), Tom Coyne set out on a goal to play every course that has hosted US Open and a golf course in every state.  I’ll spare you the suspense: He achieves it. The real story, however, is in the how, with who, why and the search for the quintessential American course. 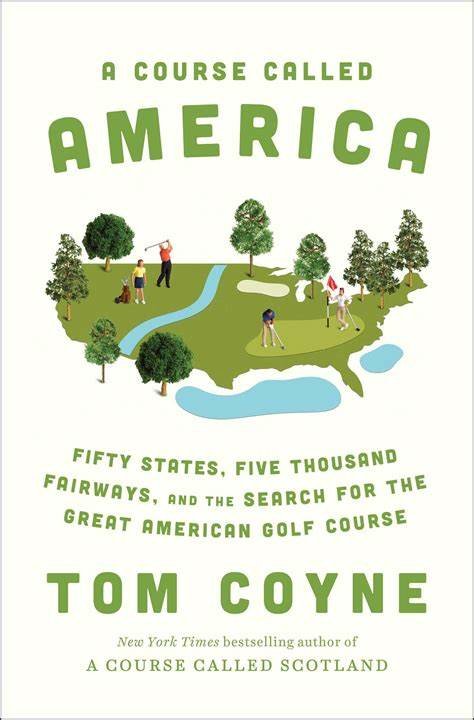 Maybe in your younger days, you had a dream to follow your favorite band across the country, traveling from city to city, taking in the music with friends and new friends you made along the way.  Maybe it’s your plan in your older days.  For one Philadelphia area resident that was last year, but the mission wasn’t music or visiting National Parks. It was golf.

In his latest book, “A Course Called America” (Avid Press), Tom Coyne set out on a goal to play every course that has hosted US Open and a golf course in every state.  I’ll spare you the suspense: He achieves it. The real story, however, is in the how, with who, why and the search for the quintessential American course.

Coyne, a Philadelphia area resident and English professor at St. Joseph’s University, is no stranger to golf pilgrimages. Previous journeys took him to Ireland for his book, “A Course Called Ireland,” Scotland in his novel “A Course Called Scotland”, and even an attempt to become a tour pro in “Paper Tiger.”  But for the American golfer, the ultimate test is the US Open, held almost every year since 1895 at the best courses America has to offer and often, the most exclusive.

The United States Golf Association (USGA), is the governing body of the grand game since 1895, in partnership globally with the Royal and Ancient (R&A) to administer its governing principles and conduct championships.  The US Open is golf’s toughest major, often hosted on very difficult courses that are setup even tougher to test the best in the world.  Best of all, its Open, which means anyone can play, assuming you have the perquisite handicap and can pass several rounds of qualifying, besting some 10,000 other aspirational sticks.  So if you are a complete statistical outlier, you’ll never play a US Open venue.  Well, unless your Tom Coyne.

One of the beautiful aspects of the game are its golf courses — the variety, the location, and their topography.  And unlike baseball, where we’re all most likely not going to hit a curve out of Wrigley Field, or football, where we’re not going to split the uprights at Lambeau, you can in theory play a US Open venue with the proper planning.

“Right-size road maps for Scotland and Ireland were easily procured and filled with pins,” writes Coyne. “[B]ut America, I quickly learned, was not built for corkboards.  I would have to wallpaper my office with pages torn from a road atlas to visualize my ocean to ocean route, so I abandoned the pinboard and turned to planning via Google Maps.  In that surrender, there were clear and obvious signals: America is huge.  And that board is an omen — you are not fit for the task.”

Coyne’s journey not only entertains the reader with unique experiences and introductions to new faces along the way, one learns of the game’s history here through the Open venues, the architectural history (and their qualities), and the people who made it happen.  And yet there is a certain social status legacy that permeates throughout the story.  Scotland’s gift to America was very much not the same game played overseas.  With American interpretation came a guarded, almost secret, society of clubs and courses not readily accessible to the public.  Most US Open courses were (and still are) held on private venues, adding to Coyne’s task another difficult layer.

“Golf was originally a game of separation between club and course,” Coyne continues. “[N]ot everyone was invited into the former, but go ahead any play the latter-and that practice continued in the U.K and Ireland with a scheme of visitor green fees that kept the courses in good shape without gouging the members.”

Our fearless journeyman does take us to very public venues that comprise the heart and soul of our game and that have hosted the championship: Pinehurst, Bethpage, and site of this year’s Open, Torrey Pines.

Coyne writes on Bethpage, “It also spoke to one of golf’s irresistible peculiarities: fans never got the chance to play nine innings at Fenway, but golfers had the opportunity to walk the same holes as their heroes and hit the shots Brooks Koepka had hit here two weeks ago-or try at least.”

The inevitable question among others in his journey, is “what is the best course in America?”, and Coyne answers it with his highly scientific Burgerdog rating system (you’ll have to read that part for a full explanation).

In my opinion, he underrates Chestnut Hill’s Philadelphia Cricket Club, is wrong in not understanding that the Cobbs Creek restoration will truly be extraordinary, and he should’ve slept in the parking lot at Bethpage. Still, Coyne delivers truly a fantastic round in “A Course Called America.”  It is a story of place; where you play, with who and what it means.  It’s a journey of a Father and his son and that son now a Father.  It’s a perfect gift for Father’s Day, a grad, or just because.

I look forward to his next adventure; perhaps down under.

R John Burnes serves on the history committee of the Philadelphia Cricket Club and is Co- Founder and club historian of the Cobbs Creek Foundation. He can be reached at rjburnes@yahoo.com