Julia Blumenreich, a Germantown Academy fourth grade teacher, has written “The What of Underfoot” in which her poetry explores the effect of grief, loss, world politics and the relationship of nature to our lives and the lives of children. 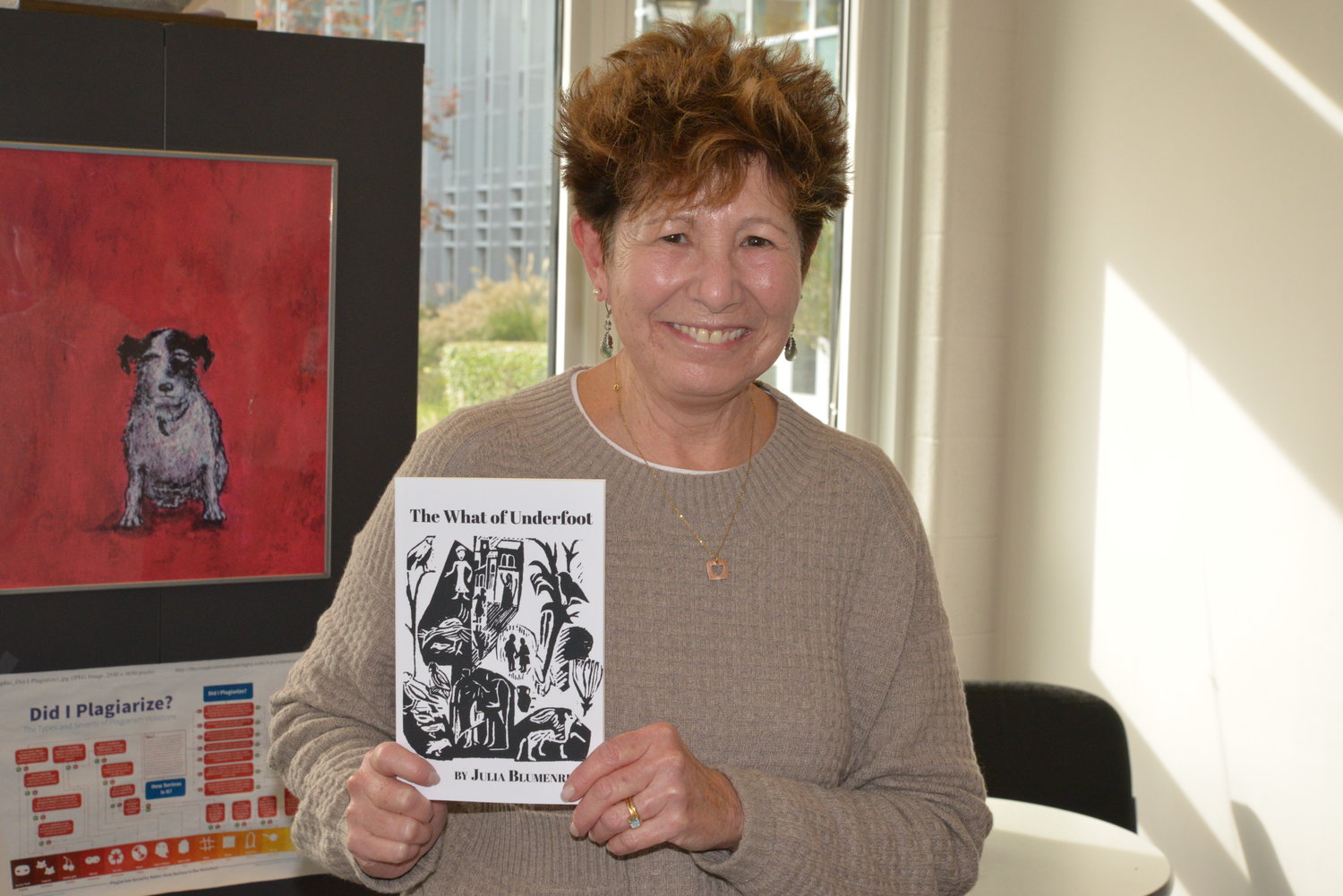 Chestnut Hill resident Julia Blumenreich, a Germantown Academy teacher, holds up a copy of her just-published poetry book, “The What of Underfoot.”
Finishing Line Press
Posted Friday, December 17, 2021 6:00 am
by Len Lear

“The poems in Julia Blumenreich’s masterful 'The What of Underfoot' ... aim to protect all that is beloved from suffering, yet are fearlessly honest in exposing what is problematic. The scale of her striking use of language and unexpected twists reveal her insight … These poems’ nuanced perspectives on 'this life,' whether personal or universal, offer gifts of awe. Her singular command of form, many of her own creation, also enhances the profound breadth of content.” - from Alicia Askenase, author of “St. Valentine May Have Been 12 Different Men.”

This encomium was recently written about Chestnut Hill resident Julia Blumenreich, a Germantown Academy fourth grade teacher who has written a just-published poetry book, “The What of Underfoot” (Finishing Line Press) in which she explores through striking painterly images the effect of grief, loss, world politics and the relationship of nature to our lives and the lives of children.

"These poems were mostly written over the last two-and-a-half years," said Blumenreich. "Many of them workshopped in the weekly Osage Poets' Workshop, which I've been a part of for a number of years."

As a writer, Blumenreich has a passion for teaching her students about the foundations of poetry. “Being a poet informs my teaching in many ways," Blumenreich told us. "First, my students sign up to read poems to the class at our morning meetings. I teach them to do formal readings. They introduce themselves, state the name of the poetry book and author they're reading from, and the title of the poem.

"Second, I have my students involved in writing poetry throughout the year. I believe, and there is data to back this up, that writing poems is not only creatively uplifting but also assists reluctant readers and writers to find their voice. I also believe that everyone, child to adult, is a poet. It’s just a matter of creating a safe environment and scaffolding the type of poem we're writing in order for the author in all of us to step forward.”

Blumenreich grew up in Fresh Meadows, NY and Levittown in Lower Bucks County. After graduating from Neshaminy High School, she went to Antioch College in Yellow Springs, Ohio and the San Francisco Art Institute, graduating with a BFA in painting in 1980.

She lived in New York City from 1980 to 1984 and showed her paintings in a gallery in Soho while also attending Brooklyn College for a Masters in creative writing. After four years in New York, she moved back to Philadelphia and settled in West Mt. Airy. She finished her Masters in poetry in the graduate writing program at Temple University in 1986.

Afterwards, while teaching English and creative writing at West Chester University, she went back to graduate school for a second Masters in K-8 education. “I believed then and still believe,” she said, “that education is the best path to social change because children are capable of growing into leaders who will make the world a better place.”

Blumenreich lived in West Mt. Airy for 14 years. Then, 16 years ago, she and her daughter Willa moved to Chestnut Hill after her first husband, poet Gil Ott, passed away after a long illness.

“The What of Underfoot” just came out in October. The title comes from the last line of a poem, “On the Way to Pastorius Park,” which is about encountering another person while taking a walk during the pandemic. In that line, Blumenreich explained that she was thinking about everything that is underneath who we are as people, what we can see versus what is beneath the surface.

“The best advice I ever received,” she said, “was to take risks, to push myself out of my comfort zone.  I have found that when I do, I am always supported towards the accomplishment of my goal. The hardest thing I ever had to do was mourning the loss of my first husband and my only sibling, a brother.”

More information about “Underfoot” can be found on the Barnes & Noble, amazon, google and booktopia websites. Len Lear can be reached at lenlear@chestnuthilllocal.com.