Police protect a group of religious protestors who had been hurling insults at passersby. They are surrounded by counter protesters holding "Hate Has No Home Here signs." (Photo by Brian Rudnick) by … 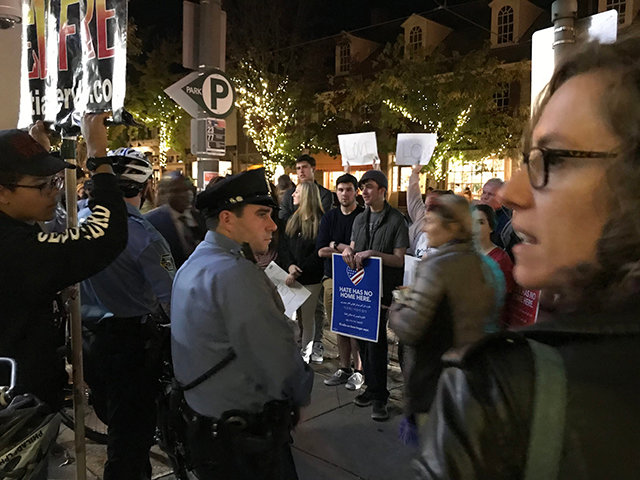 Police protect a group of religious protestors who had been hurling insults at passersby. They are surrounded by counter protesters holding "Hate Has No Home Here signs." (Photo by Brian Rudnick)

Just when you thought you’d seen everything, a group of 11 or 12 protestors occupied the corner of Germantown and Highland avenues to shout homophobic slurs and more at people arriving during the opening hours of the Harry Potter Festival on Friday evening, Oct. 20.

The protestors belonged to a religious group known as the Key of David Christian Center, which is led by Pastor Aden Rusfeldt. The church, which has an address of 1437 Christian Street in Philadelphia, has engaged recently in similar protests, including one last month at a “Pagan Pride Day” celebration in West Philadelphia’s Clark Park.

Though the group’s website describes itself as “The place of love and power… a non-denomination Christian Church,” Local shopkeeper Hillary O’Carroll, owner of Isabella Sparrow, said the protestors were not preaching about love and power.

“The things they were shouting to children and the mothers of children walking past them were so beyond horrible, so profoundly UN-Christ-like,” O’Carroll wrote in a Facebook post published to the Chestnut Hill Business District’s Facebook page. She described the group as “the most racist, bigoted, misogynistic, women-hating, gay-hating, everyone-but-them-hating, and certainly Harry Potter-hating sign-waving and megaphone-screaming protestors I could ever have imagined showing up in our town.”

Rusfeldt, who was present at the protest wore a “homo repent” hat as his followers waved signs promising general hellfire to all participating in the Potter Festival

O’Carroll wrote that she tried to drown the group out with “soothing music” from a set of speakers in front of her store, but that failed to work.

Then she came up with a plan – gather up “Hate Has no Home signs” and surround the protestors. She quickly walked residential blocks off the Avenue gathering up signs from the lawns of neighbors who were home and also from homes where no one was home yet. She apologized in her Facebook post, but explained it was the only thing she could think of to counter the Key of David protestors.

“Your signs (and many loving voices who chanted "love lives here") DROWNED THEM OUT … and eventually they could barely even be seen or heard … and they left,” O’Carroll said.

O’Carroll said she was proud of the neighborhood and promised to return the signs to everyone she could. She said she wasn’t sure if the protesters would come back, but that she was sure they’d be met with stiff resistance if they did.

“Chestnut Hill will not allow them to spew whatever it is that has turned them into such agonized souls with so much hideous vitriol to unleash,” she said.