Spending more time outside during this pandemic gives us the opportunity to explore new places and learn more about our neighborhood.

Ever popular are the paths on either side of the Cresheim … 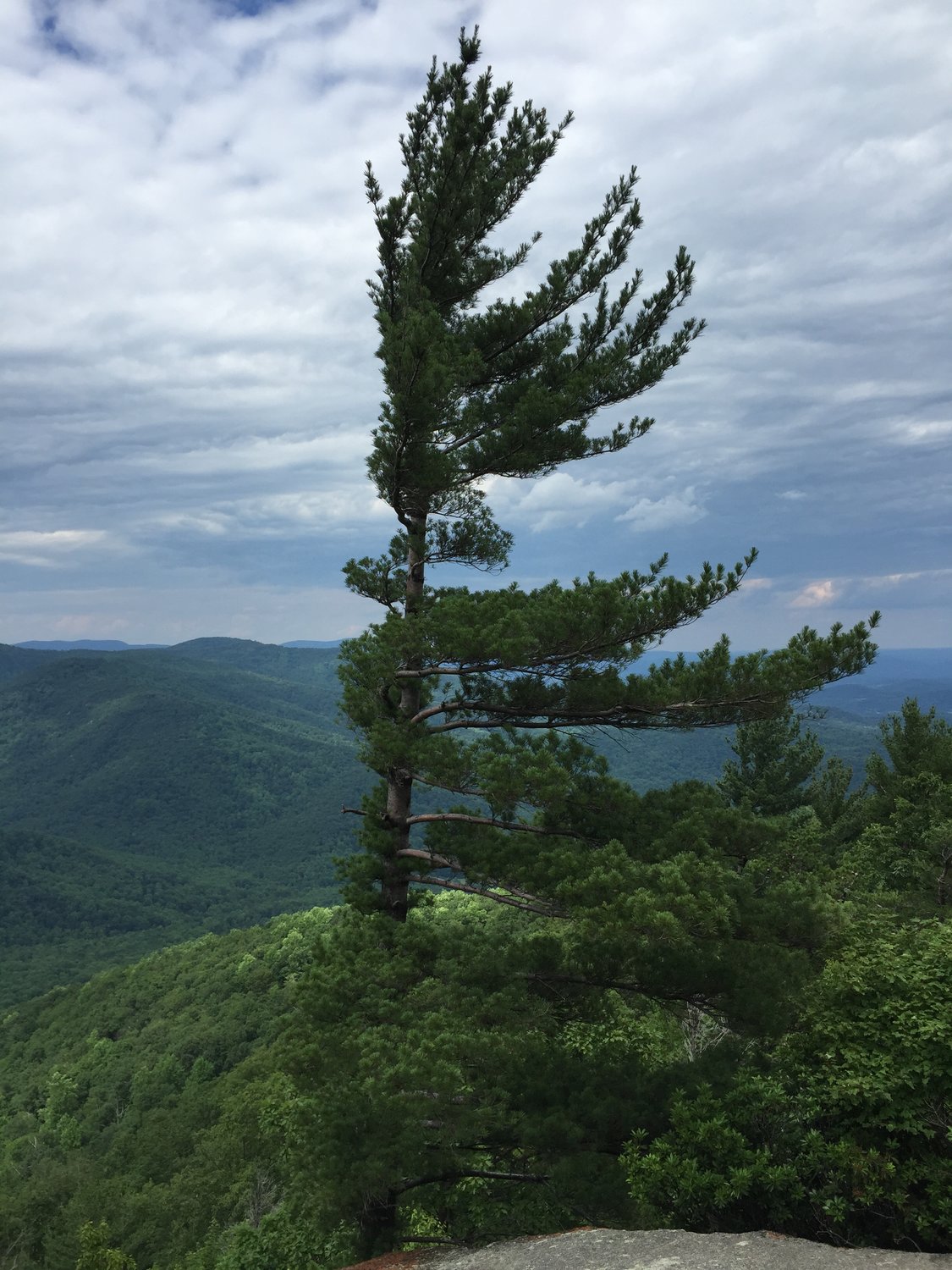 An Eastern White Pine at about 2,640 feet above sea level along the Ridge Trail on the northeast side of Old Rag Mountain within Shenandoah National Park, in Madison County, Virginia (Photo by Famartin/wikicommons)
Posted Thursday, November 12, 2020 12:46 pm
by George McNeely

Spending more time outside during this pandemic gives us the opportunity to explore new places and learn more about our neighborhood.

Ever popular are the paths on either side of the Cresheim Creek, particularly the sections between the McCallum Street Bridge and the Wissahickon.

Up on the bluffs on the East side is a large stand of tall Eastern White Pine trees.  They are of uniform trunk width and height, and together create a sense of moody isolation on that bluff: daylight diminished by their dense arching canopy, ground softened by their long needles, and sounds muted by their noble presence.

Some of us have independently created special names for that grove of trees: the Magic Forest, the Schwarzwald (German for the famous Black Forest in southern Germany), and similar.

White Pine trees can also be found elsewhere on the sloping areas above the steep sides of the Cresheim valley, including along Gatehouse Lane and Telner Street (both on the Chestnut Hill side of the valley) and Saint George’s Road (on the Mount Airy side of the valley).

Our ever industrious neighbor, Carol Rauch, recently found an article about those very trees that was posted back in 2012 on the website Growing History: the Philadelphia Historic Plants Consortium (https://growinghistory.wordpress.com).  The author, David Hewitt, an expert on land management and historic landscapes who formerly lectured at the University of Pennsylvania, offered a detailed investigation of that particular grove of Eastern White Pine trees.

It is easy to assume that those trees are indigenous to this region - that the grove was a natural result of the growth, cutting, and regrowth of our local forest in the Cresheim and Wissahickon valleys.  But they are not.

Hewitt searched back into early arborists’ records to determine when such trees were first recorded in this area.  Back in the 18th Century, such trees were only identified in areas of the Eastern seaboard that were farther north, where the trees were appreciated for their long straight trunks that were particularly useful for ships’ masts and similar uses.

William P.C. Bartram, a botanist from the noted family of Bartram’s Gardens, did not include that tree in his extensive Compendium Florae Philadelphicae of 1818.

But by later in the 19th Century such trees had become very popular around Philadelphia.  Hewitt found that the Pennsylvania Department of Forestry encouraged their planting, noting around 1901 that “It is a rapid grower and prefers poor soil, yields early returns and is very valuable when mature – what more is wanted?”  And A.T. Daly’s The Wissahickon (1922) stated “White Pines are frequent.  In recent years thousands of seedling pines have been planted with a view to reforesting naked slopes.”

Curiously, Hewitt also discovered that many of the saplings planted locally in the early 20th Century were imported from Germany.  The German nursery business was able to produce a greater quantity at a lower price than what was available in the USA at that time.  Many of our local stands of White Pines were thus created with German seedlings.  It seems implausible, but Hewitt carefully documents his research.

By the 19th Century, the original forests in this area had been largely cut down.  The flatter land had been converted to agricultural use and the creeks were cluttered with working mills.  But, in the later 19th Century as our area became more popular for suburban housing, land along the Cresheim and Wissahickon creeks was bought up by Henry Houston and others, who supported efforts to return both creeks to their “natural” state as amenities for new residents.

And, as the upper slopes of the Cresheim Valley were not ideal for new houses, they were partly reforested in the early 20th Century with White Pine trees.

But that didn’t last for long because soon the White Pine “blister rust” disease hit.

Our forests today are a result of many intersecting forces, including the diseases that decimated our Walnut and Elm trees and more recently have killed local Hemlock and Ash trees.  According to Hewitt, a similar blight hit our White Pine trees and was traced to the innumerable saplings imported from Germany.  That stopped their importation in its tracks.

Thereafter, the planting of such trees declined significantly for a period because of the higher prices charged by our undersupplied American nurseries.

So Hewitt has concluded that the magical stand of White Pines along the East bank of the Cresheim Creek were likely planted around the same time in the early 20th Century.  They are not indigenous to this area, but imported from Germany and placed intentionally on the upper slopes of the valley.  And happily these survived the rust.

Unexpectedly, a recent interview by the inimitable Malcolm Gladwell of Michael Arad, the architect who designed the 911 Memorial in New York City, mentions our trees (Revisionist History podcast, Season 5, Episode 9).

Arad says that, when he searched for an appropriate species of tree to surround his two moody memorial waterfall pits, his first choice was White Pines.  He describes them as ”the towering giants of the forest” and added that “there was something beautiful about the idea of their directing your gaze upwards towards the sky.”

In the end, our trees were passed over in favor of Swamp White Oaks for that memorial.  You can listen to the podcast to find out why.

But, during this coming winter of the pandemic, those of us who live in or near Chestnut Hill are blessed with the opportunity to explore that grove, appreciate how they got there, and follow their tall trunks upwards towards the sky.