For William Konstant, 70, a Flourtown resident for the last 36 years, the top item on his bucket list was climbing Mount Kilimanjaro in Tanzania, East Africa. 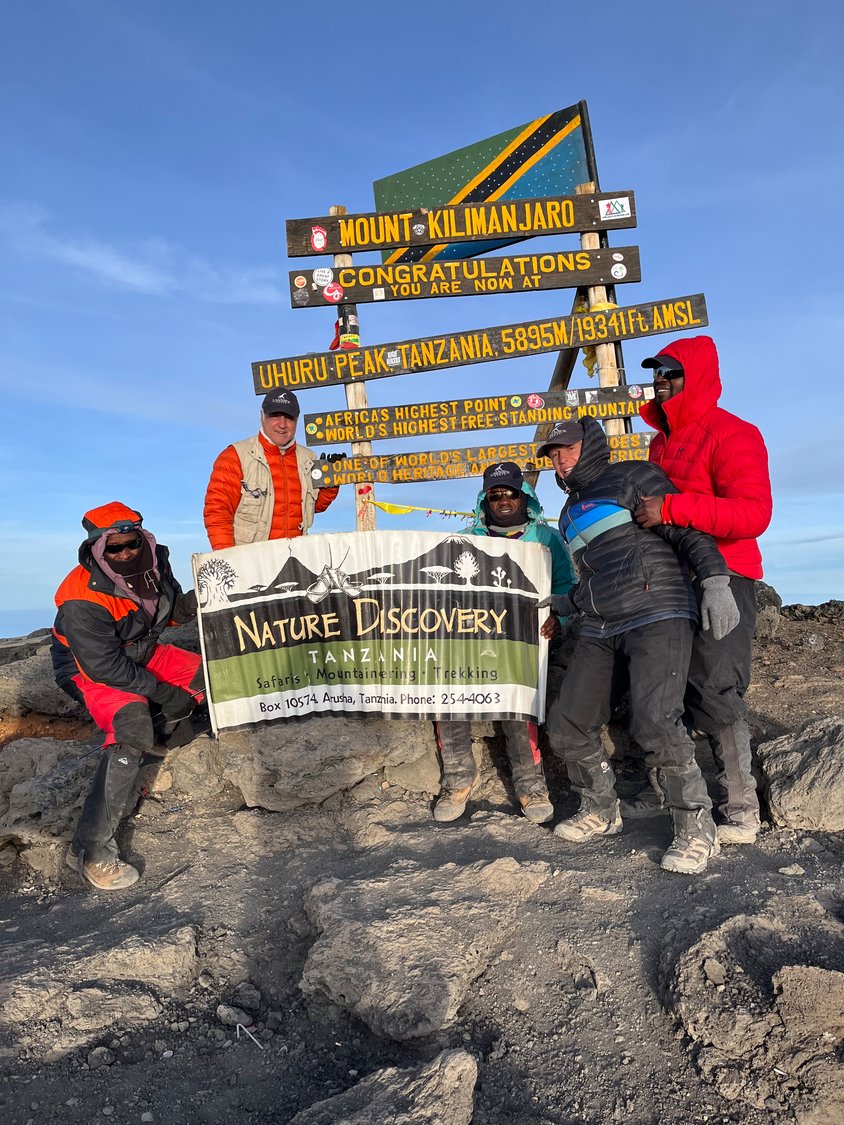 The summit at Uhuru Peak just after sunrise on Oct. 21.
Photo by Elisante Manyaro 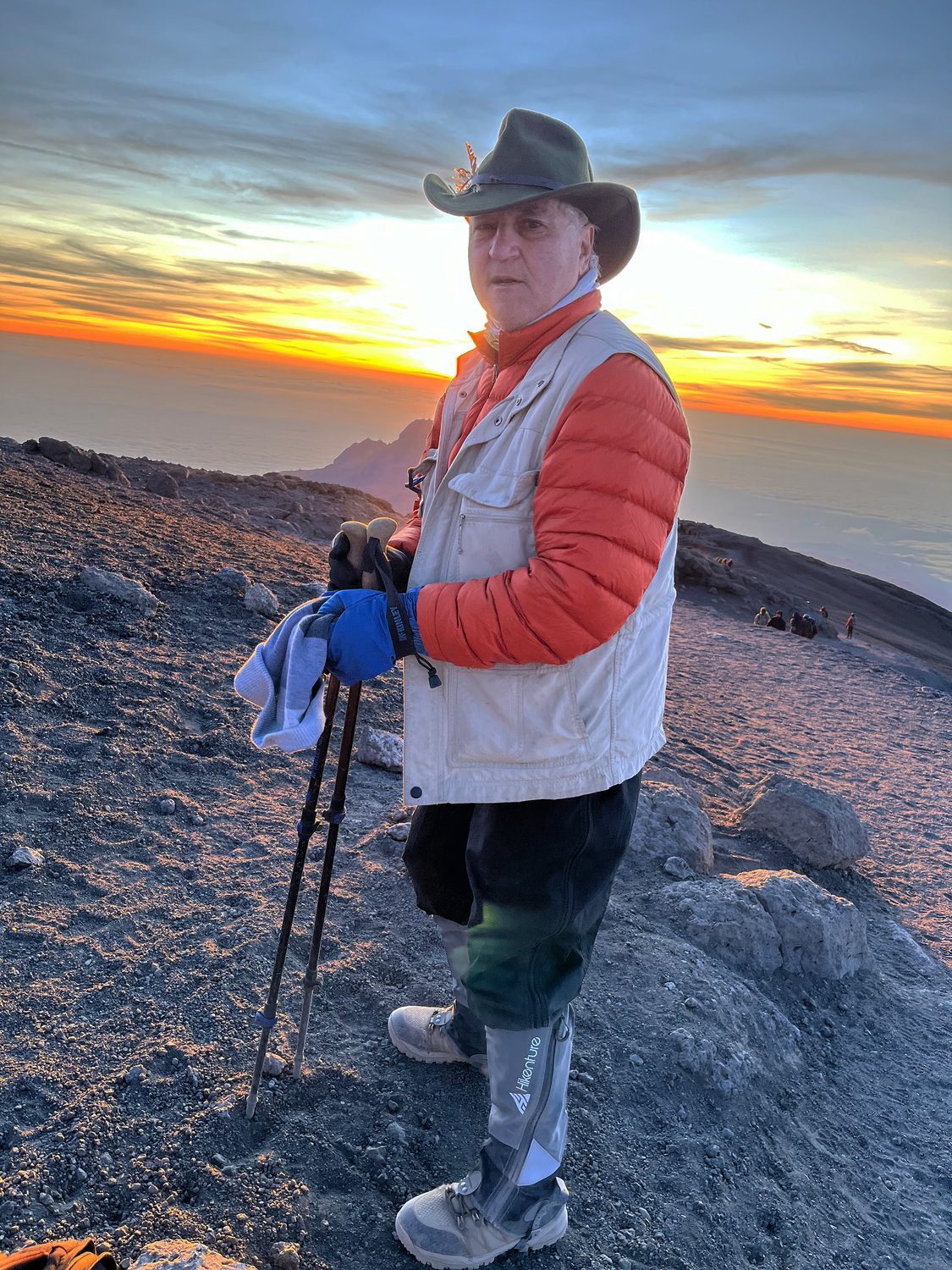 William Konstant, a few minutes before reaching the summit of Mount Kilimanjaro on the morning of Oct. 21. At 19,341 feet, it is the tallest mountain in the world that is not part of a mountain range.
Photo by Aaron Senkuye
Previous Next
Posted Thursday, December 1, 2022 12:00 am
by Len Lear

William Konstant, 70, a Flourtown resident for the last 36 years, knew from his earliest years that he would be working with animals in some capacity as a lifelong career.

“I was an animal lover as a kid, growing up in Long Island,” he said. “I brought home frogs, turtles, snakes, and baby squirrels. My parents were supportive, and enjoyed the creatures – except for the snake.”

It helped that his favorite subject in high school was biology. He went on to major in the subject at Cornell University.

While he “didn’t have the grades” for veterinary school, Konstant said, “that was okay, because I really did not want to deal with sick animals.”

Instead, Konstant went on to pursue a distinguished 40-year career in wildlife conservation. For several decades now, the top item on his bucket list was climbing Mount Kilimanjaro in Tanzania, East Africa. At 19,341 feet, it is the tallest mountain in the world that is not part of a mountain range.

So ten years ago, he asked his best friend, Rick Barongi, a fellow biology major and classmate at Cornell who also went into the zoo and wildlife conservation field, to join him. (Barongi has his own wildlife preserve, Longneck Manor, in Fredericksburg, Texas, with rhinos and giraffes, including a new baby giraffe, Kili Rose.)

The answer was a big no. And another no, five years later, when they were both 65.

But when both men were turning 70, Konstant said, he asked again. This time, he got a different answer.

“He said if we don't do it now at age 70, we never will,” Konstant said. “He runs and does pushups, and I hike, so we both were in pretty good shape.”

The two contacted Mark Thornton Safaris in Tanzania, and commissioned a customized tour just for the two of them.

And up they went.

Turns out, he said, that their guide also took Harrison Ford up, when he was 75 years old.

“The fact that we are both 70 made it that much more rewarding for us,” Konstant said. “Many people go up each day with porters, but their average age is 30.

Guides make sure that climbers go slowly and stay hydrated. That's because the body is working harder at high altitudes where the air is thinner, and contains less oxygen. It is also cold – with temperatures during their ascent generally about 15 to 30 degrees above zero.

Konstant said he did take medication to combat altitude sickness, which can result in headaches, blue lips and loss of feeling in your extremities after 15,000 feet. That’s why guides measure the oxygen level and heart rate of all their climbers each night.

“My oxygen level near the end was 80 percent, but that is only 50 to 75 percent of what it is at sea level,” he said. “If you show signs of altitude sickness, they take you down. We saw a bunch like that.”

The trip includes mess tents that have hot soup and tea or coffee or water, Konstant said, “and really good food.” And while the guide goes to the very top, the cook stops climbing at 15,000 feet.

“At the lower elevation, there were monkeys because you are basically in a forest,” he said. “At the middle elevation, there are many birds. White-naped ravens are farthest up, living off the scraps that people throw.”

“We were totally exhilarated!” Konstant said. “The hardest part for me was coming down, because I have arthritis in my right knee. Every day five or six hours of hiking – I have no desire to do anything like that again.”

The porters, meanwhile, carry 40- to 50-pound duffle bags on their heads as they move up and down the mountain like goats, he said.

“We were odd men out because of our age, but we had fun joking all the time, and there was a big ceremony at the bottom for us,” he said. “And when you do get back to the bottom, you get to have Kilimanjaro Beer, which is great.”

Konstant has been a scientific adviser for several wildlife conservation organizations, has been to Africa 12 times, has worked for the World Wildlife Fund and been the director of the Elmwood Park Zoo in Norristown. He is now working on a memoir, “Wrestled with Wolves,” which is scheduled to be published early next year.

His wife, Nanette, is a retired nurse. They have two children — Melanie, 43, of Erdenheim, who manages a veterinary clinic, and Evan, 40, of Norristown, a stay-at-home dad, a dog, Blue, 14. and four grandchildren.

For more information, email williamkonstant@yahoo.com. Len Lear can be reached at lenlear@chestnuthilllocal.com