A group of pioneers in women's crew, members of what became known as the Vichy Eight, were inducted recently into the National Rowing Hall of Fame, including Chestnut Hill resident Barbara Hoe. 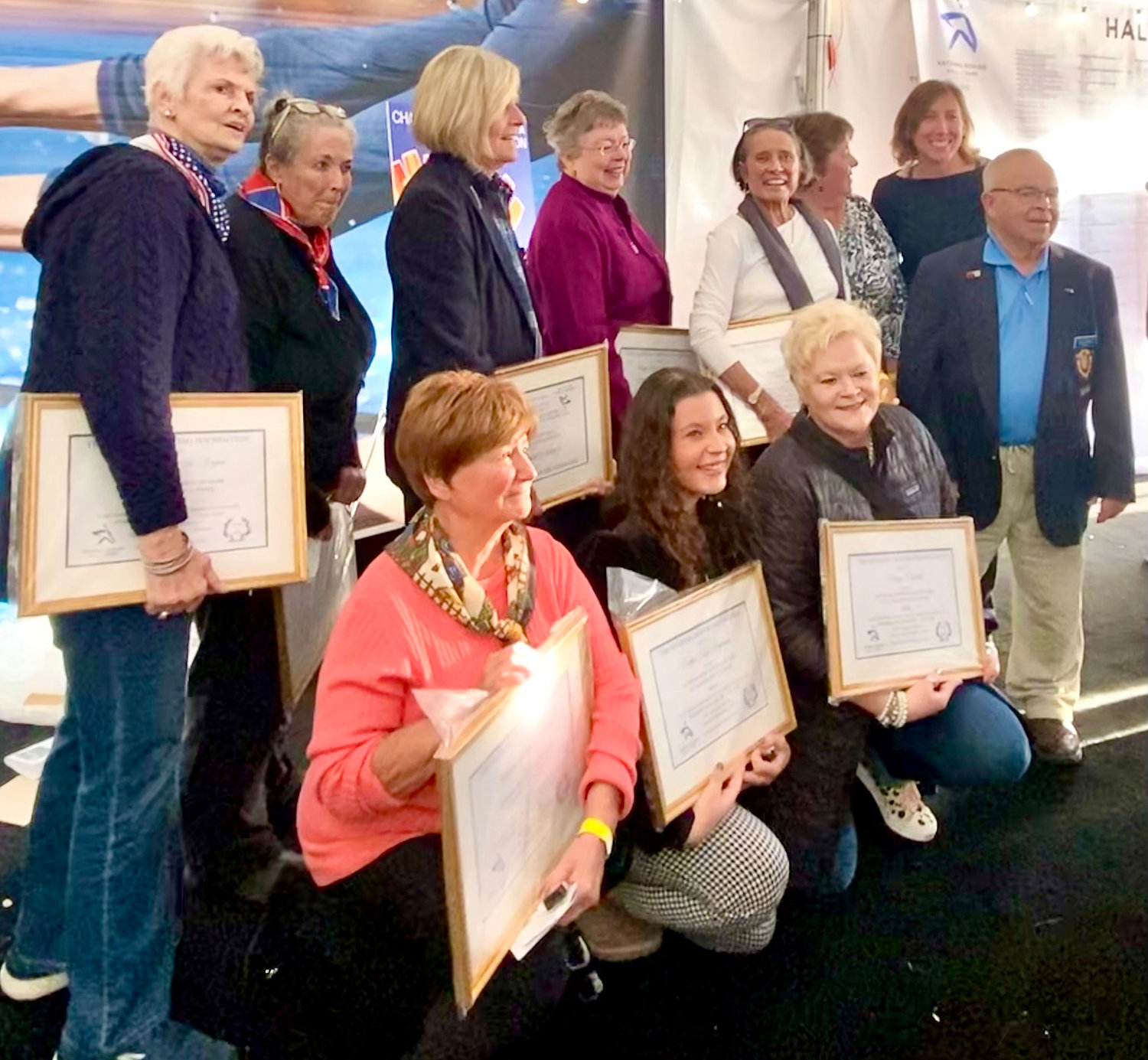 Rowers from the Vichy Eight and their coach (right) at their recent Hall of Fame induction. Barbara Hoe is in the back row, third from right. 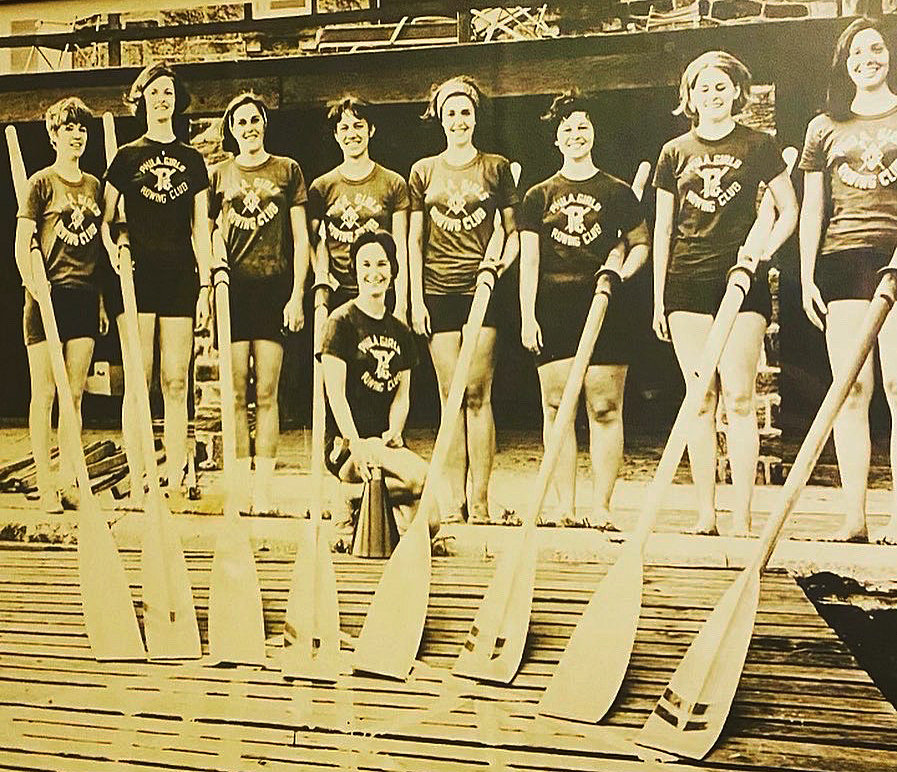 The Vichy Eight crew in 1967. Barbara Hoe is standing, fourth from left.
Previous Next
Posted Wednesday, November 30, 2022 12:00 am
by Tom Utescher

In late October at the annual Head of the Charles Regatta in Boston, hundreds of female rowers, from high schoolers to those in the masters and veterans categories, competed in dozens of different events. On the same weekend, a group of pioneers in women's crew, members of what became known as the Vichy Eight, were inducted into the National Rowing Hall of Fame.

Chestnut Hill resident Barbara Hoe was among that crew. She, like the others, belonged to the Philadelphia Girls' Rowing Association, which won the U.S. women's national championship in 1966 and 1967 and also competed at the European Rowing Championships in Vichy, France, which was sponsored by FISA, the world governing body in the sport, in 1967.

The Philly oarswomen, who became known as the “vichy eight,” were the first ever to represent the United States in international competition, helping to generate a wave of interest that would eventually produce multiple world championships and Olympic medals for American women.

"Women's rowing in the U.S. just exploded after that," said Hoe, who was 21 years old when she sat the two seat in the Vichy Eight. "Once somebody rows in an event like that, successive crews begin to participate."

Not long after that, in 1972, came the federal Title IX legislation aimed at leveling the playing field for women in athletics and many other areas.

"Title IX added another dimension to the growth of the sport," Hoe noted.

The first national governing body for crew in the U.S., the National Association of Amateur Oarsmen, was founded back in 1872. As the group's name implies, it was geared toward the development of men's rowing.

Considerably later, in 1938, the Philadelphia Girls' Rowing Club was founded, and it is the oldest all-female rowing club in the United States. In 1962 the PGRC purchased its current boathouse on Kelly Drive, and the same year, the National Women's Rowing Association was founded.

Barbara Hoe had played a number of different sports while growing up, and later she would coach squash at Germantown Friends and at the old Springside School.

Describing the beginning of her involvement with rowing, she related, "I had seen an article in the newspaper, and someone I knew introduced me to the club."

The new national association for women began to hold annual national championships on the West Coast, and in 1966 and 1967 the PGRC eight won their event at the regatta.

The coach of the Philadelphia women was John Quinn, who was also at the recent Hall of Fame induction. He had been a coxswain competing for Vesper Rowing Club.

"I forget exactly how he came to be our coach, but everybody knew everybody else along Boathouse Row at that time," Hoe said. "He was an excellent coach and really got the most out of us. When we won those two [U.S.] championships, then we felt accepted on Boathouse Row."

If you were a female rower in the U.S. at that time, that was the highest level of competition you could expect to experience.

Even for men at the time, there was no formal development process and no selection camps for crews that represented the U.S. in international racing. Usually, the top collegiate crew in a given year would be sent by the NAAO to FISA championships (the Harvard crew was preeminent in '67).

After winning the American women's title for a second time, rowers from the PGRC eight went to another major event simply as spectators, and a FISA official also in attendance reached out to them and invited them to the European Championships.

After much persuasion, America's NAAO sanctioned the women's entry, but no funding was provided. The story goes that the group received a loan anonymously, the benefactor worrying about being stigmatized among the male rowing community.

Some of the dominant countries on the international stage at the time were members of the communist block, such as powerful East Germany. Their national team members had few financial worries.

As Hoe related, "We saw much more polished crews over there. We all had jobs and then we rowed after work. These other teams didn't; rowing was their job."

The women in the U.S. eight devised their own outfits, and although they were able to borrow a boat in France in order to race, they had to tote their own oars to Europe. Most of the rowers were in their early 20's, although the stroke of the boat was just 18.

At Vichy, the women's crews raced on a 1000-meter course, while the men rowed the 2000-meter distance that is the international standard for everyone today. In the finals, the Soviet Union beat East Germany for the gold medal. The relatively inexperienced Americans, true amateurs, came in sixth, but generations of outstanding U.S. women rowers would follow in their wake.

"The nucleus of the boat stayed together one more year and won Nationals," Hoe related. "After that, we pretty much went our separate ways. We'd accomplished a lot, and it was time to go about our everyday lives."