Among other awards, "Proof" by David Auburn won the Pulitzer Prize in 2001 for Best Play, and the work is now a staple with community theaters. 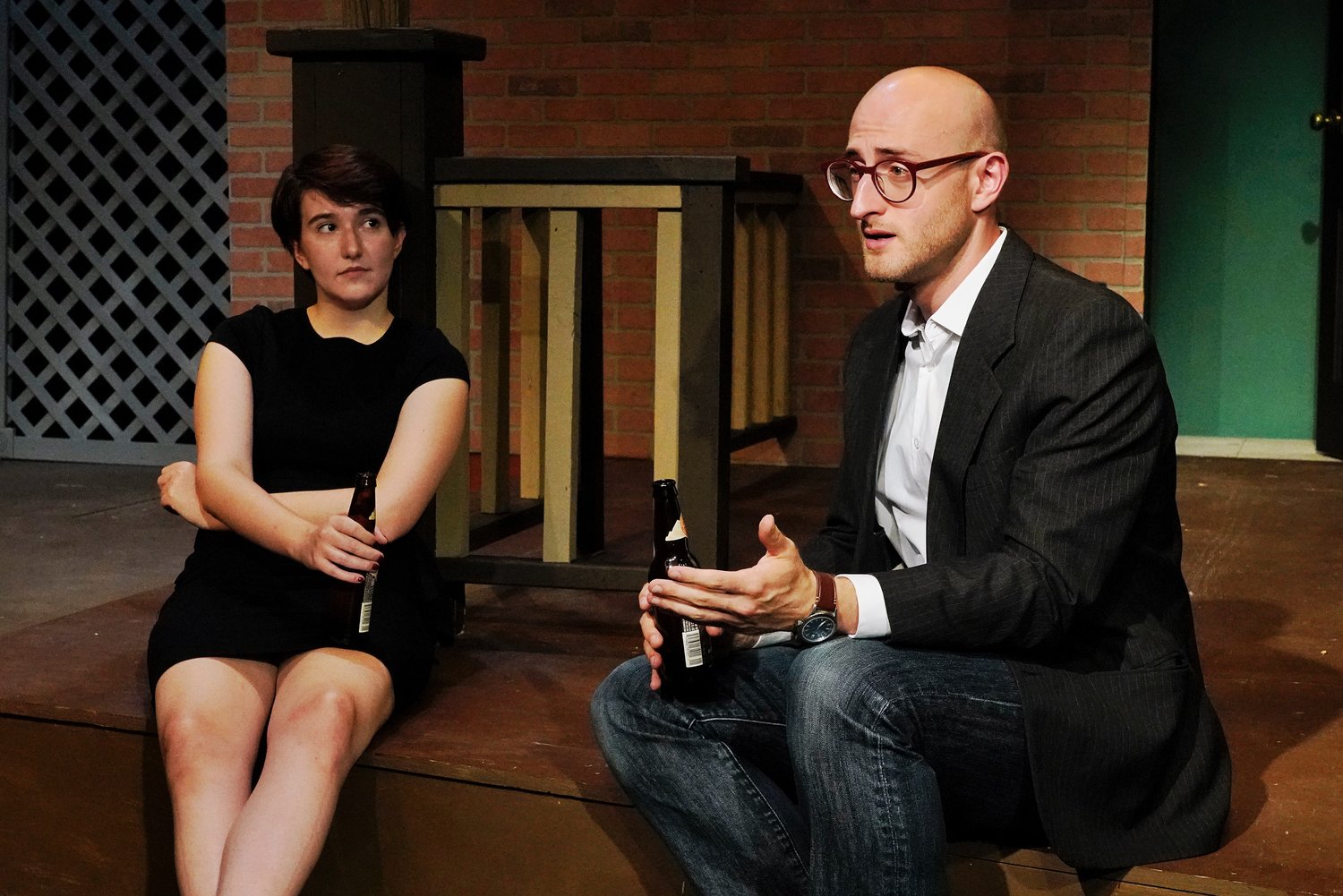 Elsa Kegelman as Catherine and Jed Krivisky as Hal in "Proof."
Posted Thursday, September 22, 2022 12:00 am
by Hugh Hunter

Among other awards, "Proof" by David Auburn won the Pulitzer Prize in 2001 for Best Play, and the work is now a staple with community theaters. Awards aside, "Proof" is a troubled drama about troubled people, and the current Stagecrafters production struggles to surmount Auburn's script problems.

Sure, "Proof" has its bright spots. It opens on the eve of Robert's funeral, a mathematics genius who succumbs to mental illness. Catherine, his 25-year old daughter, remembers him in three separate flashbacks. These sequences are dramatic and poignant. They evoke the suffering of both the mentally ill and those who love them. (Two-time Barrymore nominee Bob Weick is super-convincing as Robert).

But the main character in "Proof" turns out to be Catherine. She is a mathematics genius herself, and one with more chips on her shoulder than you can count. One way or another, Auburn keeps making his Catherine say to those around her, 'You are too insignificant to understand what I am going through'.

Over time, this really gets grating. Catherine is a non-stop hissy fit. What's her problem? Is she right in thinking that sister Claire abandoned her father, dumping his care on her? Is she suffering with the terror of thinking that she, too, will drift into mental illness?

Oddly, the Stagecrafter set is split right down the middle. Stage left is a backyard porch where all characters assemble. Stage right is open grass that only comes into play when a character angrily rushes off the porch. It is claustrophobic, and you get the feeling of caged up people. (Maybe that is what Director Becky Fleckner wants.)

Sister Claire (Katie Frazer) flies to Chicago from New York, ostensibly to attend the funeral. She really wants Catherine to live with her in New York. At first, chatty Claire is officious. Later, you understand she is caring in her own way, yet the best Catherine can do is grant her sister passive acceptance.

Boyfriend Hal (Jed Krivisky), too, comes up short. He is a mathematician protegee of the late Robert, but lacks creative genius. When Catherine entrusts him with her secret work – an original proof of math propositions – Hal thinks her father must have done the math. Thus, Catherine is also angry about her love interest's betrayal.

In playing Catherine, Elsa Kegelman does have natural stage presence. At her father's funeral, she is alone on the back porch when Hal's mathematician rock band performs their signature song, "Imaginary Numbers". The song is three minutes of silence, and it is moving to watch inflections of emotion course over Kegelman's face and body.

Then Kegelman has to go back to delivering Auburn's searching dialogue. Late in the play, Catherine compares herself to Marie-Sophie Germain, the self-taught mathematics genius who passes herself off as a man to get her work published – a feminist explanation for Catherine's chronic pique.

In Catherine's world there is "elegant" mathematics and "lumpy" mathematics. She sees her father's math as elegant, hers as lumpy. The same distinction can apply to the characters in "Proof". Robert is elegant in his tragic suffering. But Catherine is lumpy, as Auburn keeps giving unconvincing reasons to explain her anger, as if hoping one of them will stick and "prove" to be explanatory.