The Chestnut Hill Community Association Land Use, Planning and Zoning Committee meeting on September 9 was devoted to reviewing plans for a development of eight townhouses at 8201 Shawnee … 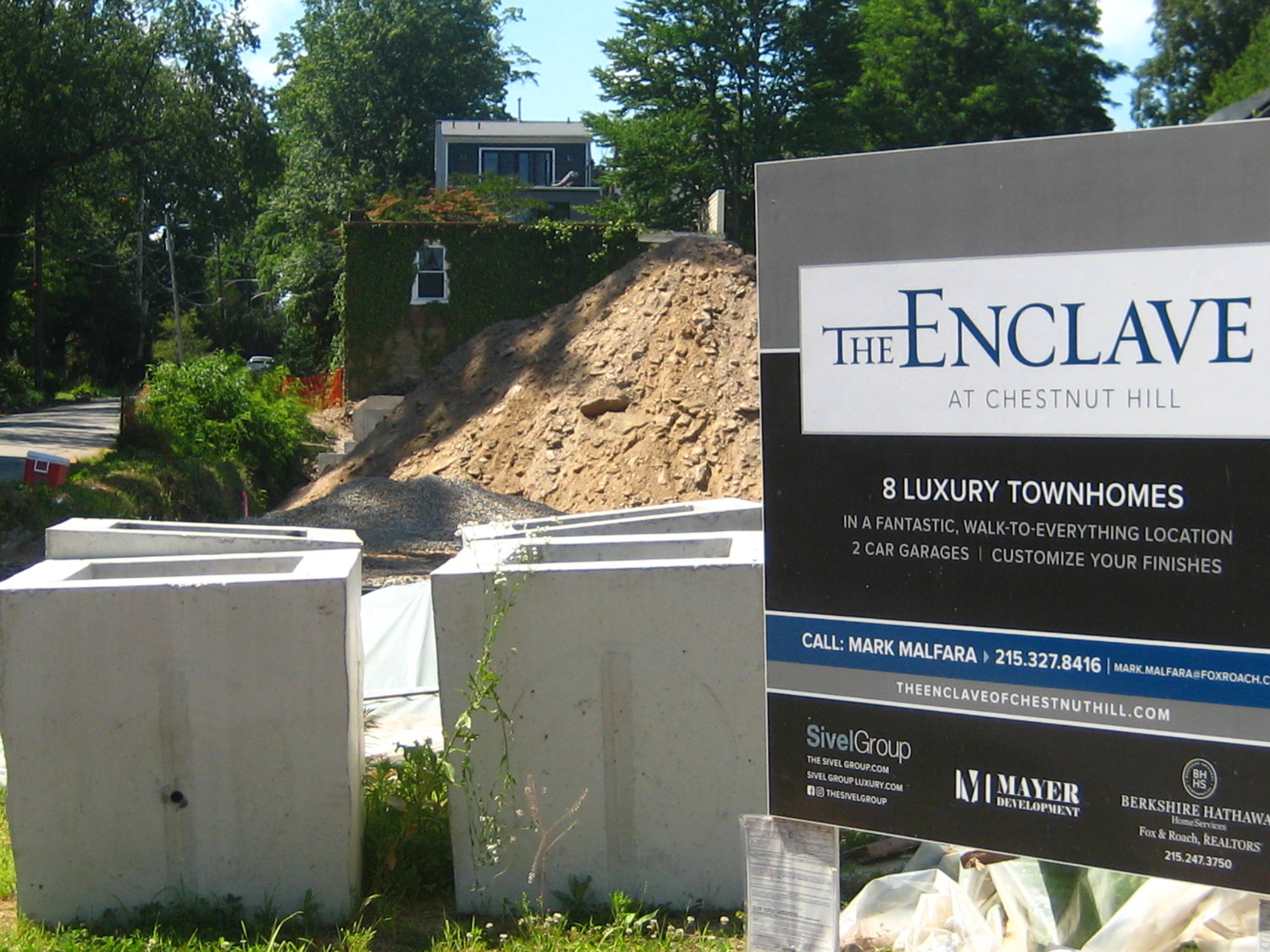 LUPZ approved the plan for 8201 Shawnee Street, conditional on the submitted final drawings and a report on compliance with the dimensional and massing standards.
Walt Maguire 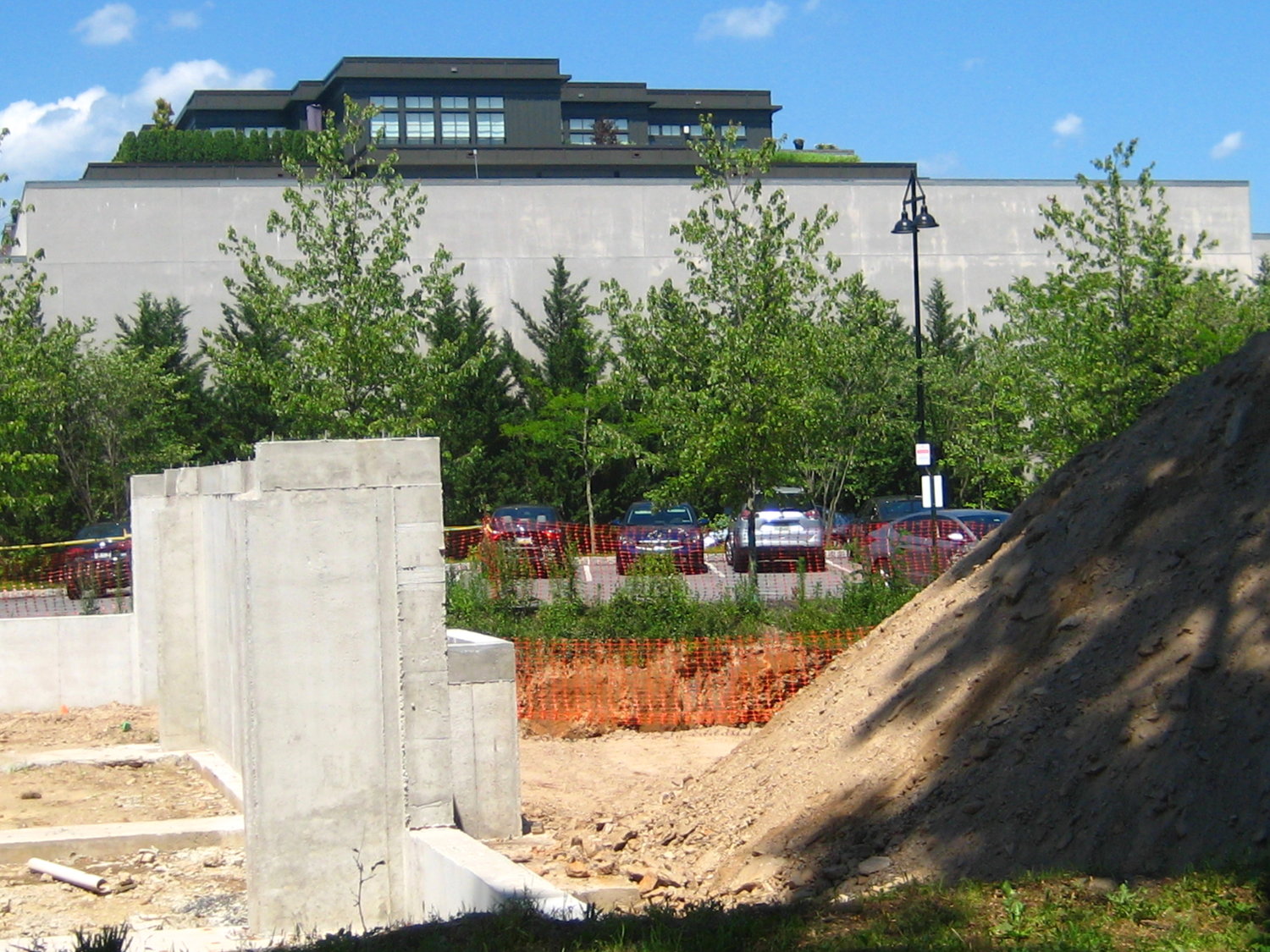 The Chestnut Hill Community Association Land Use, Planning and Zoning Committee meeting on September 9 was devoted to reviewing plans for a development of eight townhouses at 8201 Shawnee Street.

Richard Snowden, of Bowman Properties, said his partnership decided to sell townhouse blocks on Shawnee Street at the end of 2019 to the father and son team of John and Scott Mayer. “We’ve sold it,” said Snowden. “And our interest going forward is really to make sure that the Runyan-McCoubrey design is executed.”

Runyan & Associates closed in 2019, but architect Jean McCoubrey is still a consultant on the project.

The property was subject to the community development agreement negotiated in 2011 and 2012. Additionally, embedded in the sale agreement were further restrictions that it be built according to the Stan Runyon and Jean McCoubrey designs. “We have worked with the major interests over the last year and a half to reach a plan that is satisfactory to the Mayer’s and the Bowman Property interests,” said Snowden. “The project team that was in place when we owned the property has been replaced with the exception of Stantec, one of the engineers.” Bowman Properties is managing the project as a consultant to ensure adherence to the original community development agreement, including the design restrictions embedded in the sales agreement. “Bowman will stay involved during the construction project to make sure that the design, as reached in that conclusion, occurs the way we had originally planned it back in 2012.”

The 2012 community agreement was divided into parcel A, which is the Fresh Market building facing 8208 Germantown Ave., and Parcel B, the land facing Shawnee. The LUPZ review was about the dimensional massing standards on Parcel B: a maximum height 38 feet measured at the average sidewalk grade along Shawnee to average of pitched roof of each townhome; maximum of four stories; and a setback from Shawnee street 16 feet from the property line. Walls, terraces, balconies, fences, bays, other architectural elements and landscaping are permitted to be in front. There would be two sections, four units each, with a driveway opening onto Hartwell Lane.

The footprint of the houses is smaller than what was presented in 2016. John Mayer explained that the revised plans reduce the building footprint almost a third, adding a rear deck and reducing the rear courtyard. The interior design has changed, but the LUPZ committee was mainly concerned with the exterior and its relation to the neighborhood.

Much discussion was on building materials. Mayer emphasized Wissahickon schist will be used, not veneer. (Materials were not part of the 2012 agreement, but Mayer said they wanted to align with the committee’s standards as much as possible.) There would be a limited homeowners association, primarily covering snow removal and trash. Another concern of the committee was whether these would be for rental investment or homeownership; Mayer and Snowden confirmed the intention was ownership.

Mayer also apologized for pouring the foundations two years before the rest of the construction, pointing out that the construction industry largely shut down unexpectedly in 2020.

Larry McEwen, LUPZ co-chair, cited an earlier comment by fellow co-chair John Landis that the design is “a very rich and sophisticated design.” “For me,” McEwen added, “it reminds me of a sort of a grouped arrangement of mini Hill houses, Charles Rennie Mackintosh inspired.” (MacKintosh had a reputation for early 20th century Arts and Crafts architecture.)

The committee in general felt the plan was favorable, but there were some questions based on outstanding concerns from the original review, such as parking, and some of the described modifications that were not reflected in the newer drawings. Snowden pointed out the color scheme in the renderings looked lighter, and some of the materials indicated in the plans had already been changed. The committee’s main question was whether the plans still lined up with the existing building permit.

The motion was to approve the current plan, conditional on the submitted final drawings and a report on compliance with the dimensional and massing standards. There was an additional recommendation that the consistent maintenance of the facades be made part of the transaction deeds that run with the property.

Mayer said a revised permit was in process but admitted that not all the renderings were up to date and said refreshed material would be delivered within a week.

The drawings and documentation can be reviewed at chestnuthill.org.