The proposed division of 540 W. Moreland Ave was opposed by the committee on the grounds that it provided no information on plans for the new lot, nor architectural details for restoration of the existing main house. 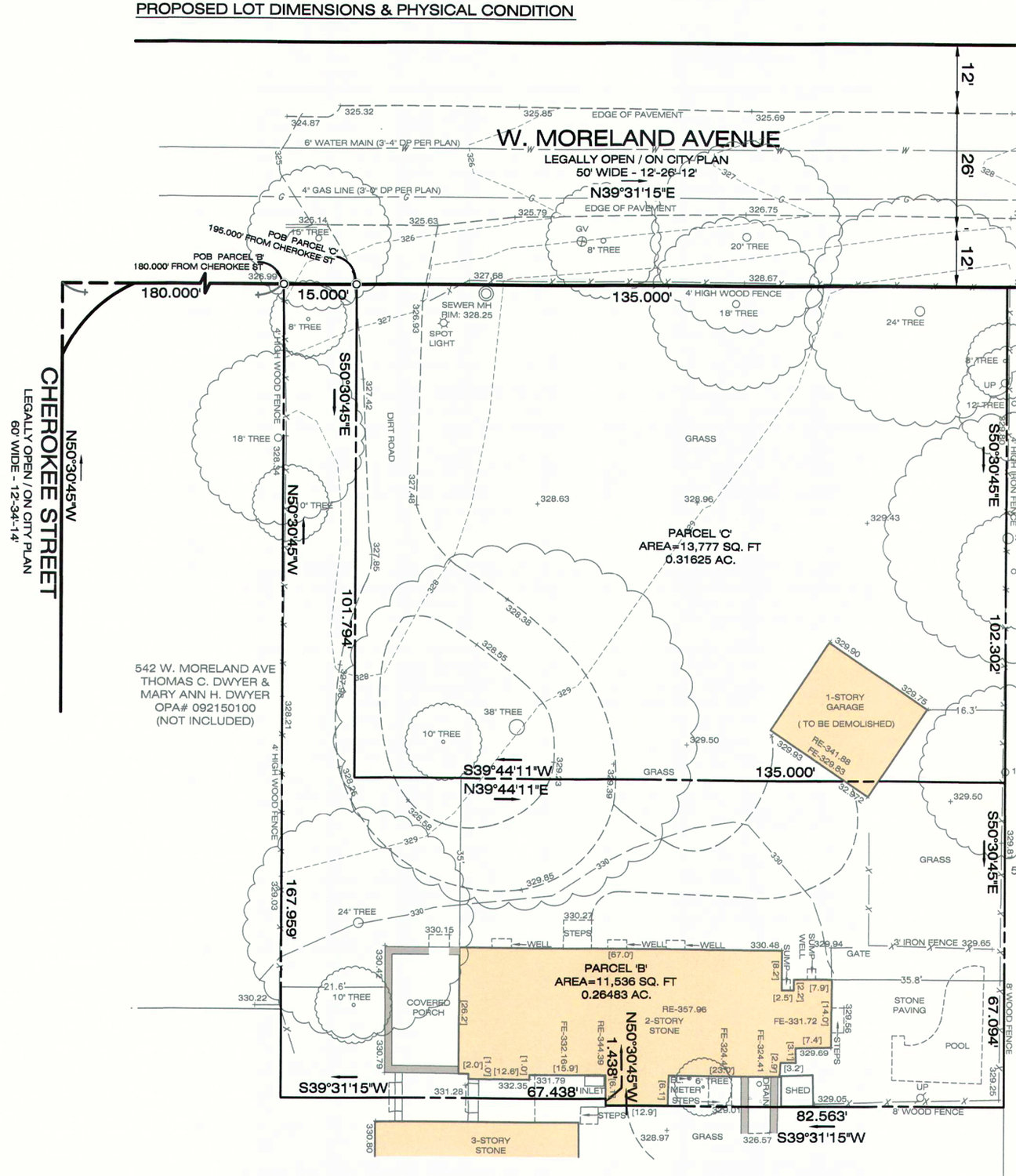 540 W. Moreland is now a large front lawn leading up to the main house. The proposed change would divide it into one lot bordering the street and a lot for the house behind, with a 15-foot-wide driveway connecting that to the street. (Plan from Ruggiero Plante Land Design for Ganos LLC)
Posted Wednesday, June 9, 2021 10:30 am
by Walt Maguire

At the Chestnut Hill Community Association Land Use, Planning and Zoning Committee meeting on June 4, the proposed division of 540 W. Moreland Ave was opposed by the committee on the grounds that it provided no information on plans for the new lot, nor architectural details for restoration of the existing main house.

The Moreland property is now a large front lawn leading up to the main house. It would be divided from more than 25,000 square feet into a 13,777 sq. ft. lot bordering the street and an 11,536 sq. ft. lot for the house behind, with a 15-foot-wide driveway connecting he rear home to the street. Lawyer Vern Anastasio, representing the owners, said there were no plans to develop the lot “as of today.”

Several neighbors attending the meeting said their main concern was the sight lines of the new lot and what might be built there. Don Ratcherd, reading a list compiled from conversations with his neighbors, also expressed concern about the original house, damaged in a fire two years ago. He worried its restoration might be neglected if new construction on the front lot was prioritized and might ultimately become hidden entirely. Darin Steinberg, a lawyer hired by the neighbors, described the request for a zoning variance as a “self-inflicted need” and not the sort of hardship typically required for a zoning variance.

A variance was requested because the Philadelphia Department of License and Inspection had rejected a proposal to sub-divide, noting the minimum lot width is 75 feet and the proposed driveway for the rear property is a proposed 15 feet. But when questioned how the new 15-foot width was determined, Anastasio said it was the client’s “preference.”

The committee suggested it might be too early to consider a variance, since no plans were presented for the new lot. Jason Friedland, the newest LUPZ board member, pointed out that properties in the historic district require more consideration as to development, and “we should know what we’re voting on.” John Landis, LUPZ co-chair, concurred.

“When we make decisions on particular projects we always ask for details,” he said.

It was opposed by the committee by a unanimous 5-0 vote.

The other issue on the committee’s agenda was a house at 215 E. Evergreen and a request to use the cottage in the rear as an apartment to let. Anastasio, also representing the owners Graciela Vargas and Richard Corkery, presented a supporting letter from their neighbors indicating not only that they had no issue with this, but that previous owners of the property had already been renting out the cottage without zoning approval or any issues. Following on from a board suggestion at the May 18 DRC meeting, the owners agreed to add a proviso to make the minimum on a lease six months, to avoid Air BnB use, and a second proviso to not add permit parking or allow “permanent” parking, to avoid possible access issues in the rear alley shared with neighbors on Evergreen. No structural changes were proposed, barring any issues in an upcoming L&I review. It was approved by a unanimous vote.

This was the first meeting for new LUPZ board member Jason Friedland, Director of Operations and Investments at Iron Stone Real Estate Partners.

ZBA approves 540 W. Moreland subdivision
DRC hears proposals to save one historic building, demolish another
How a community can best work within the city's zoning process