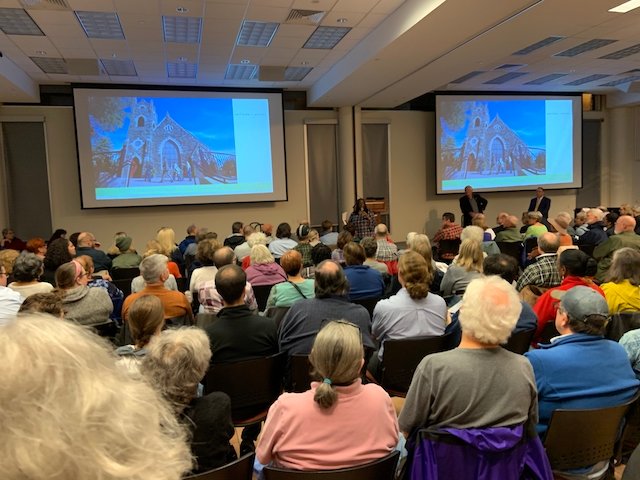 More than 200 attended a meeting at the United Lutheran Seminary to oppose the school's plans to build 149 units of new housing. (Photo by Brendan Sample)

With more than 200 people in attendance at the latest East Mt. Airy Neighbors meeting, members of the United Lutheran Seminary board, along with architectural firm Cecil Baker + Partners, agreed to suspend plans to build three five-story residential buildings on the seminary’s campus.

No neighbors who attended the meeting expressed support for the project, and 8th District Councilperson Cindy Bass was on hand to urge leadership to officially abandon the project. ULS and Cecil Baker will now go back to the drawing board in an attempt to create a new plan that will be better received by the community.

Tonyelle Cook-Artis, EMAN president and former 200th District State Representative, moderated the Oct. 22 meeting and emphasized a need for an open and respectful conversation. While some dialogues did get heated amid many strong and conflicting opinions, dozens of people were still able to ask questions and convey their opinions on this controversial topic.

The development plans were initially created out of the school’s desire to create more revenue. The board of directors realized that the institution could not continue operating in the long term in its current financial state, and so action needed to be taken. With board members agreeing that the campus had too much land for them to use for the school’s purposes, they felt that a residential development would be the best path and began work on the project about a year ago.

Calling ULS a “community of value to Mt. Airy,” Cecil Baker detailed his firm’s approach to the project. Agreeing that residential structures were the only viable options for the campus, he had proposed creating a mixed-income village with underground parking so as to maintain a green campus.

“Can we create something that Philadelphia has never seen?” Baker had asked of the project. “I’m in the business of change, so I tend to try and look for things that make our community better.” 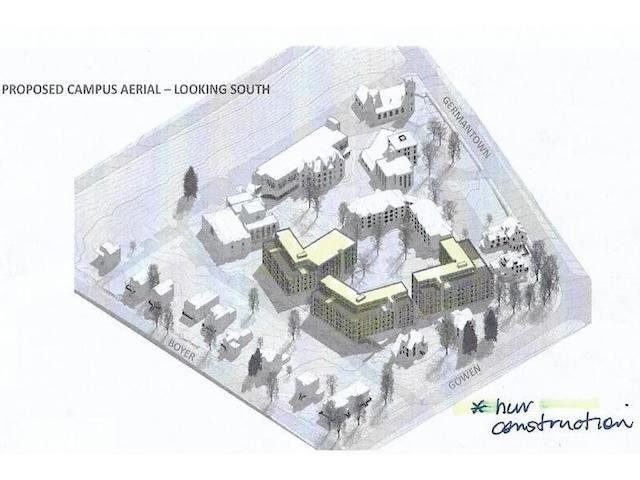 A rendering of the proposed residence buildings at United Lutheran Seminary in Mt. Airy. The buildings would add 149 housing units to the campus.

ULS representatives were also quick to emphasize that not only was the plan tentative and in the early stages, but that no specific sale or other deal was in place. No parts of the campus property have been sold off and no zoning application has been submitted to the city.

Neighbors came in force to express their objections to the plan. They were concerned about issues such as parking, traffic, a lack of transparency in announcing the project, housing costs, impact on the historic property and setting up a potential negative precedence for the long term. ULS students were also upset over the fact that they felt their voices were not being heard on this, and demanded a say in what would be a major change to the campus on which they live.

“I’m deeply troubled that the community wasn’t a part of the process to begin with,” said Sarah Fryman, a first-year ULS student. “I’m also deeply troubled that the students found out through the community. We weren’t directly told. Someone went around the neighborhood saying, ‘Here’s a flyer. There’s a meeting about this.’ We haven’t been told anything else. We were told to come to this meeting to find out information.”

While the proposed project would not directly impact most of the buildings on the campus, it does call for the demolition of ULS’ power plant and the relocation of the President’s House. According to Hercules Grigos, zoning counsel for ULS, the seminary board had considered selling off some of the property several years ago, but stopped when it realized it was going down the wrong path.

Despite neighbors’ strong objections to the plan as it was presented to them, several residents in attendance also felt that they would not be inherently opposed to some sort of development on the ULS campus. While they had no desire to see the proposed plan become a reality, they would be willing to have further discussions with both the seminary’s board and the developers about what they would be willing to accept.

When she first arrived, Bass emphasized that no zoning project would receive her office’s support without also having the community’s support. She also expressed her concerns about how this development would be dropping a densely populated project into a densely populated area, but was still willing to hear more input from both the developers and neighbors during the meeting. After hearing nearly an hour of feedback from community members, however, she was able to come to a conclusion before the night was over.

“Rather than go out and get numbers on this project, I’m going to ask Lutheran to abandon this project,” Bass said. “It does not have the level of support that we are used to with zoning, and you can feel it in this room – there is no support for this. What I think Lutheran should do is convene a conversation with East and West Mt. Airy Neighbors about what the people who live in this community can live with.”

Shortly after Bass’ request, Cook-Artis confirmed a suspension of the plan and that ULS would be meeting further with EMAN to discuss other possibilities for the campus.