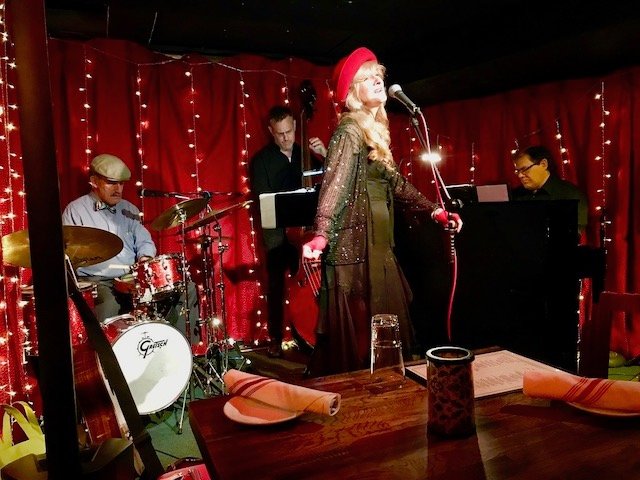 Andrea Carlson, a multi-talented guitarist, vocalist and artist who has captivated audiences all over the U.S. and Europe, will be performing with her band, Love Police — Rich Rudin on piano, Arturo Baguer on double bass and David Bopdrummer on percussion (yes; Bopdrummer is actually a drummer!) — on Thursday, April 25, 7-11 p.m., at Paris Bistro, next to the Chestnut Hill Hotel.

Carlson, the mother of four children, has performed in many venues throughout the Philadelphia area, New York, New Jersey, Delaware, Chicago and L.A. She has also performed throughout Europe since 2013 — in London, Paris, Amsterdam, Barcelona and Edinburgh, etc. As of 2015, she is an official part of the Fringe Festival Edinburgh. (She also teaches two days a week at Settlement Music School in Germantown and one day at their Willow Grove facility.)

“This will be my sixth consecutive season in Edinburgh,” she said last week, “with more shows added each year. Last year, I took a side trip to perform in London and added a show in Fife to support the Langtoun Jazz Festival. I did a total of 33 shows in three weeks! It was quite an exhausting but exhilarating schedule. I also have started touring more through the U.S. Within the past six months I have performed in Houston, Austin, Knoxville, Nashville, Memphis, Denver and Santa Fe.” 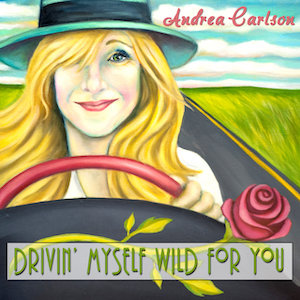 The cover of one of Andrea’s jazz albums, “Drivin’ Myself Wild For You.”[/caption]

Born in Knoxville, Tennessee, Carlson moonlighted as a vocalist throughout her studies with several different bands, doing music from the '20s, '30s and '40s. This continued for 10 years, and she was able to perform in many of the nation’s top venues and festivals. A highlight was opening for the one and only James Brown!

“I was in a fabulous band called Airflow Deluxe in Chicago,” she explained in an earlier interview. “It was a 'little' eight-piece Big Band fronted with four vocalists, and I was one of them. We did four-part harmony in music that spanned from the '20s though the '40s. The whole band was flown to Forth Worth, Texas, for a private event that featured James Brown. I have never experienced so much electricity from any performer ever. But then, I was standing less that 10 feet away from him!”

In July 2016, Carlson released “Love Can Be So Nice,” recorded at MorningStar Studios in Ambler. The latest project she recently started, also at MorningStar, will be an all-French CD with many of the same musicians who played on her previous two CDs, which include local standouts as Larry McKenna, Stan Slotter, Dave Posmontier and Kevin MacConnell, among others.

But by far the hardest thing Carlson has ever done was “getting my classical guitar degree at the American Conservatory of Music in Chicago while working. I had only been playing guitar a few years and was self-taught. I could play, of course, and was performing in several bands, but I couldn’t yet read music and had to totally relearn everything. It was extremely difficult, but I feel it was my greatest achievement!”

Regarding her stunning artwork, Carlson had an ongoing sketch project in Doylestown which led to a show there, with a concert at the opening. Then she made a coloring book with her sketches of Fonthill Castle, a museum of decorative tiles and prints in Doylestown, and released that with an event in Media.

The Doylestown Intelligencer newspaper found out she was sketching houses in the Doylestown Borough and put her photo on the front page with an article about the sketch project! “There is so much going on with my art, but it feels so much like music to me ... It is just another translation!”

What is the best advice Carlson has ever received? "‘Nice makes nice.’ This is the way I try to live my life.”

If the Doylestown resident could meet and spend time with anyone on earth, living or dead, who would it be and why? “My father, who passed away when I was so young. I feel like I never got to have any good heart-to-hearts with him. There are so many questions I want to ask him about his life and family and their escape from Hungary. I wish I could pass his story on to my kids.”

For more information about Carlson’s April 25 performance, call 215-242-6200 or visit andreacarlsonmusic.com. Len Lear can be reached at lenlear@chestnuthilllocal.com