Fourth of July is shaping up to be an actual holiday this year, with parades ready to roll, fireworks scheduled once again and backyard barbecues in full effect. But this year has been no ordinary year, and so of course, why would the menus for our backyard shindigs be business as usual? 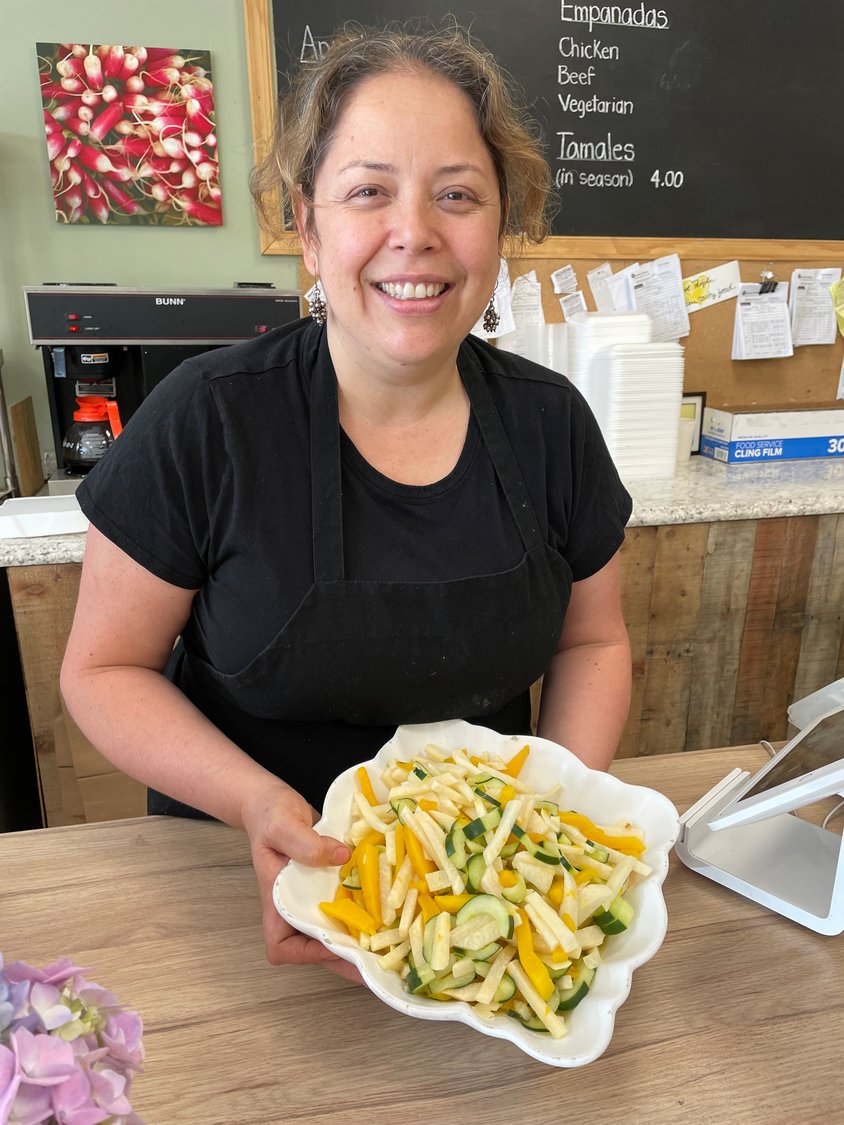 Karla Salinas of Karla’s Kitchen and Catering with one of her most popular seasonal cold salads, the jicama, cucumber and mango. See recipe with story. 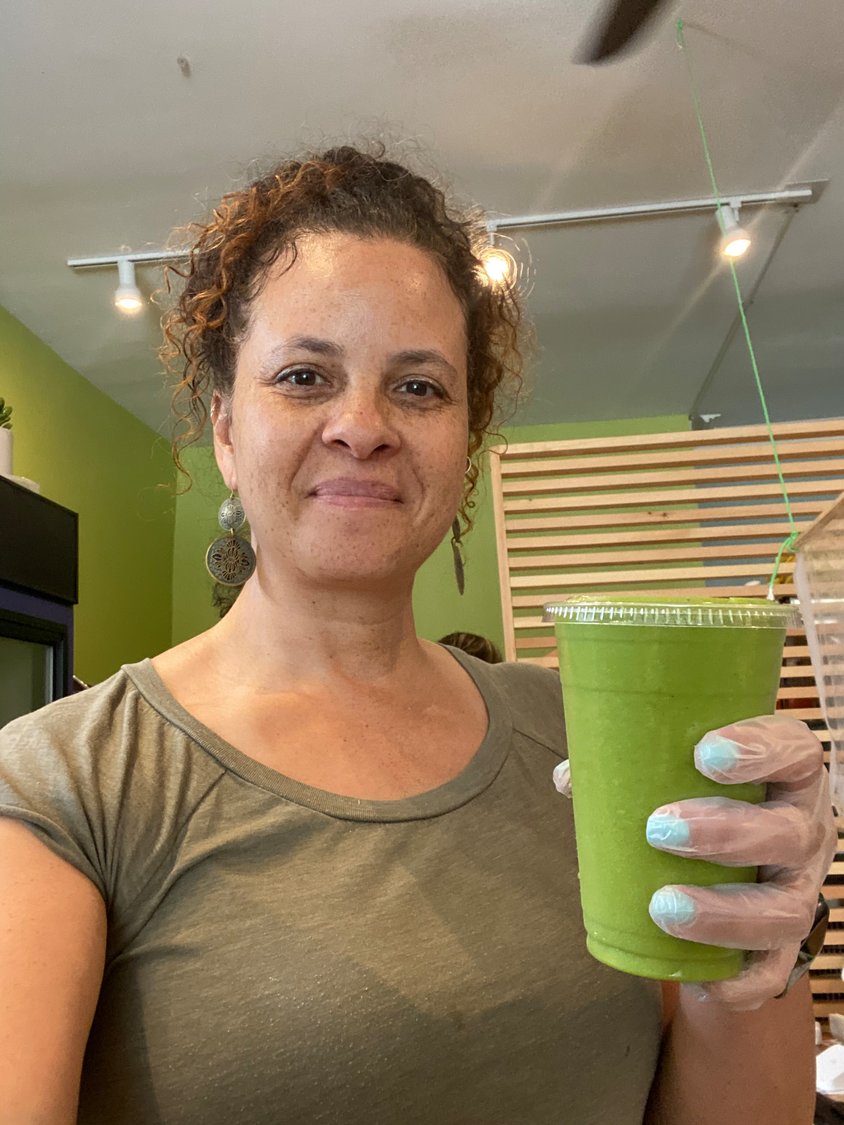 The Juice Room owner Malikha Washington with The Tropical Green smoothie, a popular choice at the Mount Airy shop. See recipe with story.
Previous Next
Posted Wednesday, June 30, 2021 10:20 am
by April Lisante

Fourth of July is shaping up to be an actual holiday this year, with parades ready to roll, fireworks scheduled once again and backyard barbecues in full effect.

Our backyards have become havens this summer, “staycation” destinations where we feel safest gathering, cooking and dining. When we grill on the Fourth, everyone looks forward to the return of the traditional Fourth of July menu favorites, like racks of ribs, burgers and hotdogs.

But this year has been no ordinary year, and so of course, why would the menus for our backyard shindigs be business as usual? Meat and seafood prices have been skyrocketing, making crab cakes a total luxury, and sending chicken wings into $3 a pound territory and the price of red meat soaring. Those beef tenderloins and ribs that might have been $1.50 a pound are above $3 in recent weeks.

Prices are up more than 30 percent on meats across the board, according to reports. The price of lobster and crab are through the roof, with one retailer reporting the typical $14-a-can crab is now pushing $60. Pork is soon to follow, trend watchers say. Chicken wings are pricey simply because they were one of our number one take-out orders throughout the year. The problem isn’t the supply – the cows and chickens are all ok – it’s the production and supply chain. Some processing plants are still missing workers, others aren’t operating at full speed.

So what does this mean for our barbecues this year? I’m trying to see the silver lining here, so I’m thinking this might present an opportunity to try some alternatives, like vegetarian burgers and veggie platters, in lieu of some of the staples.

Hear me out. We all actually might be a lot more game this year to switch up the menu than we think. There is no denying that this year ushered in a new consciousness about personal health and healthy foods. Food marketers say veggie burgers are replacing beef, and cucumber salads and broccoli salad recipe searches more than tripled online this year. The art of pickling and the science of probiotics are considered two of the hottest food trends right now. And another huge at-home addition to our repertoires was the smoothie, a fun, do-it-yourself meal in itself.

“It would be good if we could, as an entire country, not be so meat-centric,” said Flourtown registered dietician, certified diabetes educator and nutritionist Patricia Morris. “When you picture a plate of barbecue, the meat is the primary thing on the plate. We can increase our vegetables, put them on platters, or have a display of watermelon.”

“I think people are also trying to be healthier and are thinking about plant based burgers,” Morris said.

Morris, who works with patients to combat everything from Crohn’s to Celiac Disease, is a big proponent of the plant-based burgers. But are we willing to eat them on the Fourth?

Locally, that may just be the case. As consumers watch prices rise, many are embracing seasonal fruits and veggies, as well as plant-based alternatives and burgers for meals.

“I just think people are going a little less on the meat and going heavier on the sides and veggie-based salads,” said Weavers Way Co-op prepared foods manager John Adams. “Crab cakes are astronomical. Seafood is worst right now but pork is coming and beef is catching up. Right now, there is a shift. People like any grain-based salad, bean salad. Lentils and legumes do well. We sell tons of chickpea and cucumber salad.”

It’s easy to incorporate some healthful additions to your backyard barbecue, all while enjoying the traditional holiday favorites. No, I’m not suggesting everyone forego the racks of ribs and risk a party time coup, but there are ways to put more of an emphasis on other superstar dishes.

Karla Salinas of Karla’s Kitchen & Catering in Flourtown is cranking out the summer salads. Among her most popular right now are her broccoli salad, quinoa salad and her signature jicama, cucumber and mango salad.

“People who want to be healthy are choosing this one,” Salinas said. “It is very low calorie and has not a lot of sugar. The key is to make it when everything is in season now.”

And what about dessert? Pies and whipped cream-topped cakes are always a favorite, but smoothies can be just as versatile.

Smoothies were one of this year’s most popular – and most viral - do-it-yourself quarantine kitchen experiments. A simple combination of yogurt or milk, fruits and a little bit of ice goes a long way. Adding too much ice can cause the smoothie to separate if it sits too long.

“And blending soluble fruits like bananas and mangos makes it smoother,” said Malikha Washington, owner of Mt. Airy’s The Juice Room. “Serving it in a tall glass is always visually good.”

Here are a few recipes to try this Fourth of July if you’re looking to switch things up a bit.

Once the cucumber, jicama and mango are julienned, toss with the lime juice and season with salt and pepper. Serves 4.

In a blender, combine all ingredients and blend until smooth. Serves 1.