Keith Russell, 64, is a lifelong resident of Northwest Philadelphia except for his college years, having grown up in Mt. Airy and lived in Germantown since 1988. “My earliest memory of having … 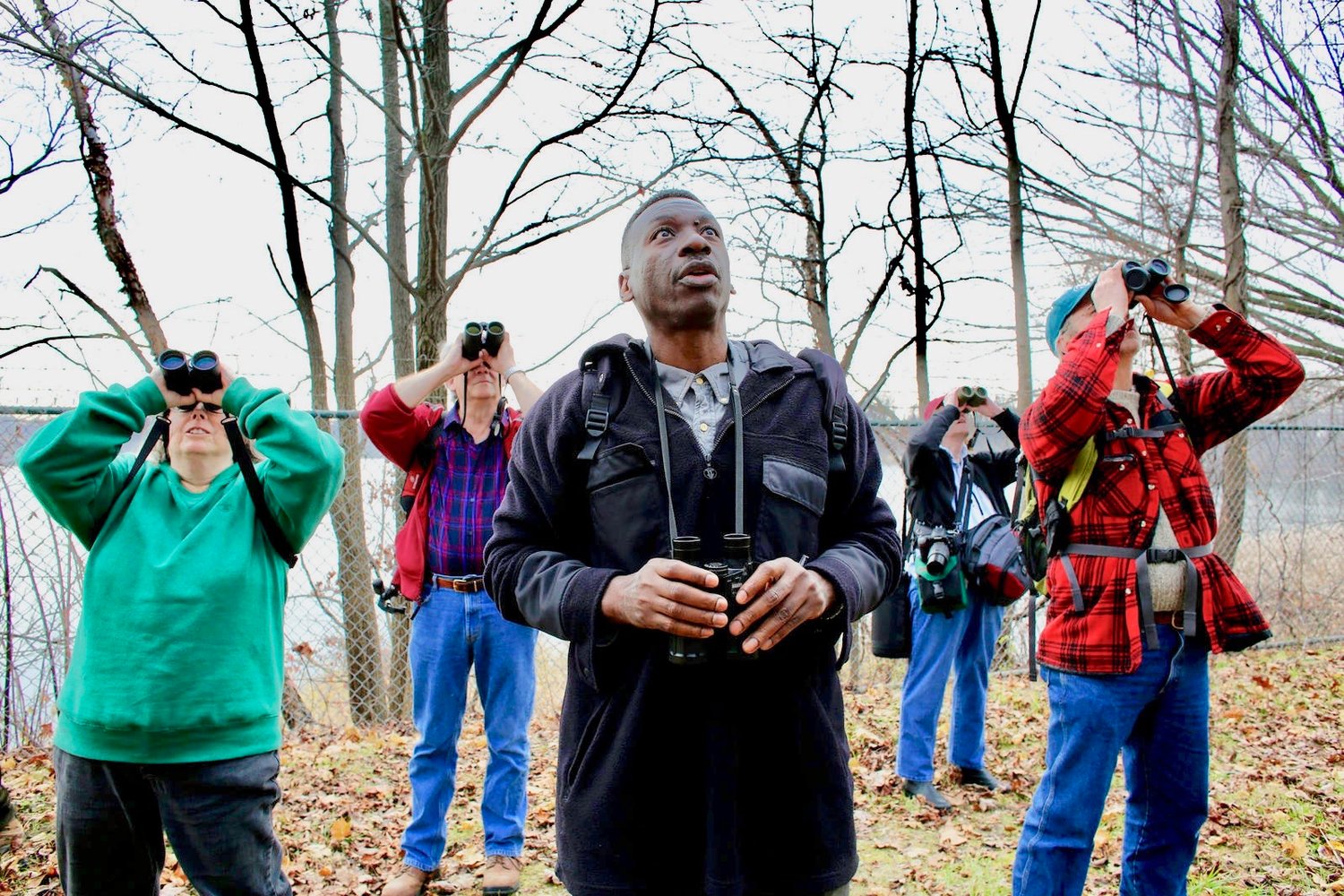 Keith Russell (center), who grew up in West Mt. Airy but now lives in Germantown, is seen here bird-watching with fellow members of the National Audubon Society. An ornithologist, Russell is program manager of Urban Conservation at Audubon Pennsylvania. (Photo courtesy of National Audubon Society)
Posted Thursday, November 19, 2020 11:35 am
by Len Lear

Keith Russell, 64, is a lifelong resident of Northwest Philadelphia except for his college years, having grown up in Mt. Airy and lived in Germantown since 1988. “My earliest memory of having an interest in birds,” he told us, “was giving an oral report about birds to my third-grade class, but I don’t remember when or how the interest came about. No family members, friends or teachers were responsible.”

Russell has been known to do perfect birdsong imitations and has been called the “Master Birder of Carpenter's Woods,” although “I still visit Carpenter’s Woods but not as much as I used to. Now as a member of the Friends of Carpenter’s Woods, when I do go to the woods, I don’t just go to look for birds but also to help with habitat restoration and management projects.” (Russell is also an opera lover and concedes that there may be a connection between bird whistling and having a love of opera.)

Russell is a graduate of Germantown Friends School (1973), Cornell University (B.S. Biology, 1978) and Clemson University (M.Sc. Zoology, 1981) and since then has held down several bird-related positions with the Academy of Natural Sciences and National Audubon Society. Currently program manager for urban conservation at Audubon Pennsylvania, he is also writing a book about the status and history of the more than 300 bird species that have been recorded in Philadelphia since the 1600s.

In recent years birds have been dying at an alarming rate, possibly unprecedented, because of climate change-related events like hurricanes, tornadoes, floods, wildfires, air pollution, etc. And in Philadelphia Russell's expertise has been sought because of the huge number of birds that have died after flying into high-rise buildings in Center City. On one day in early October, an estimated 1,000 to 1,500 birds flew into buildings in a four-block radius of Center City.

Stephen Maciejewski, a volunteer for Audubon Pennsylvania, picked up at least 400 dead birds and logged them for further study, and Russell placed the birds in the freezer in his Germantown home before they were taken to the Drexel University Academy of Natural Sciences for further study. “It was a catastrophic event,” said Maciejewski. “The last time something like this happened was in 1948.”

According to Russell, scientists estimate that up to one billion birds collide with buildings in the U.S. every year and that these collisions peak during the spring and fall migration periods. During our recent interview, Russell said these massive kills “are usually associated with overnight rain or fog, which can cause nocturnally migrating birds to become confused and fly towards brightly lit buildings or other brightly lit objects.

“But mass collision events don’t occur every time it’s raining and foggy, so other factors are also necessary to cause these events. In the meantime, birds continue to collide with endless numbers of buildings in smaller numbers on a regular basis because they are fooled by the ever-increasing amount of glass on buildings and artificial light at night, which allows birds to see reflective and transparent surfaces even at night.”

Russell insists that there are ways to stop these catastrophic bird deaths or at least minimize them significantly. “There are two main ways to prevent these collisions,” he said. “First, we can address the problematic effects of artificial light at night. This can be done by reducing or eliminating artificial light at night. One could also change white or red lights to green or blue, or change steady burning lights to blinking lights that regularly go on and off.

“Some of these approaches could be relatively inexpensive to implement, and some may also save money. Second, we can address the problematic effects of glass. This can be done by covering collision-prone windows and other outdoor glass surfaces with small rows of dots, stripes or other decorative patterns to discourage birds from flying into the glass. These patterns look like barriers to birds, but they usually don’t interfere with a person’s ability to see through the glass.”

In addition to the massive losses of birds from collisions with buildings, including private homes, over the last three decades, Russell said that in the Philadelphia region grassland birds, shorebirds, marsh birds, most game birds and many migratory songbirds have declined in abundance, although raptors, some waterfowl (especially geese), certain songbirds such as warbling vireos and other species like wild turkeys have actually increased.

Regarding the pandemic, Russell “missed being able to go to the gym for a while. Time spent on the phone talking to family, friends and co-workers on Zoom meetings has increased dramatically. I am blessed, however, to have remained employed through the pandemic.”

For more information, visit pa.audubon.org. Len Lear can be reached at lenlear@chestnuthilllocal.com