City and fire officials gathered in Chestnut Hill last week to cut the ribbon on a $10 million renovation and expansion of the Engine 37 firehouse on Highland Avenue. 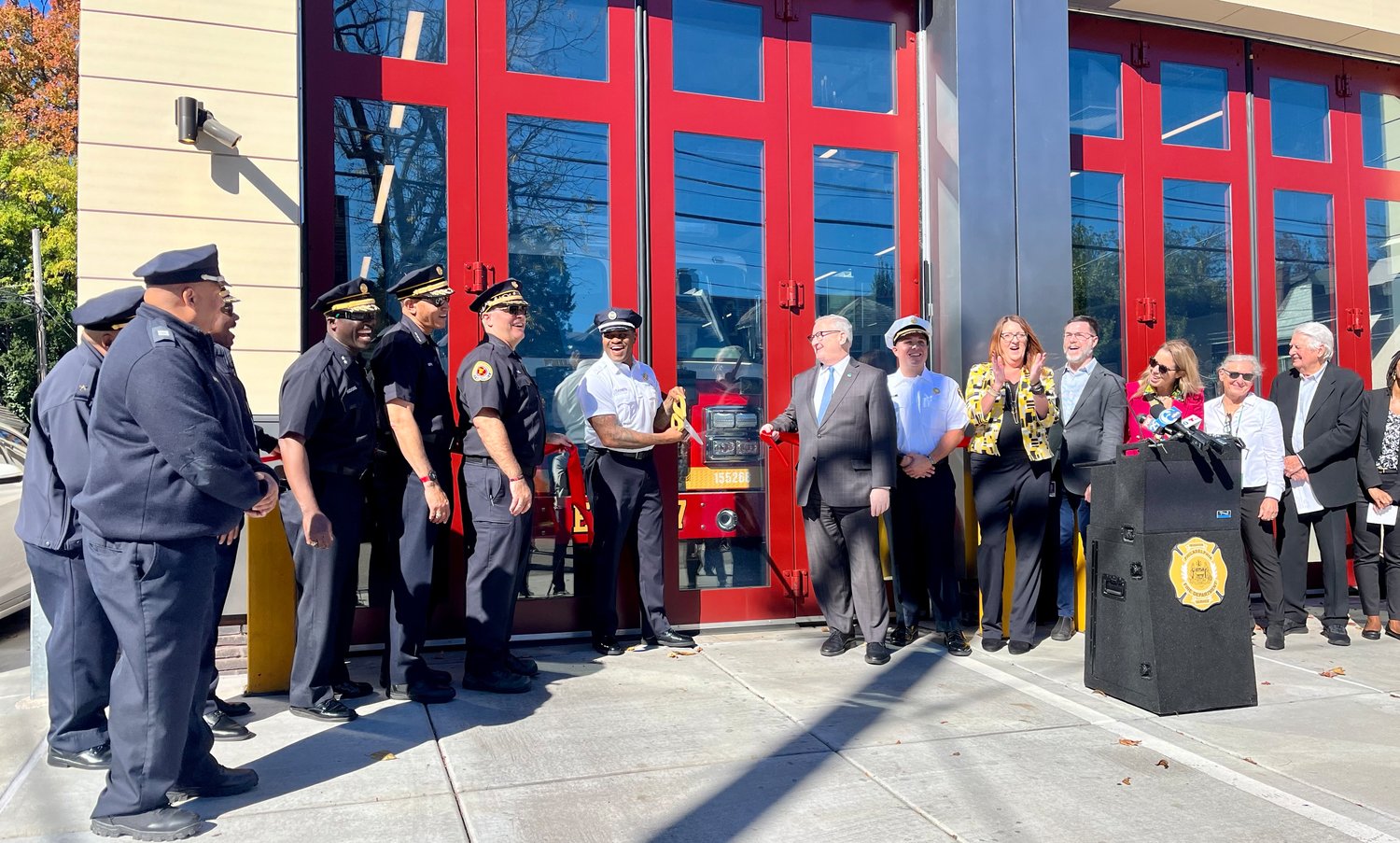 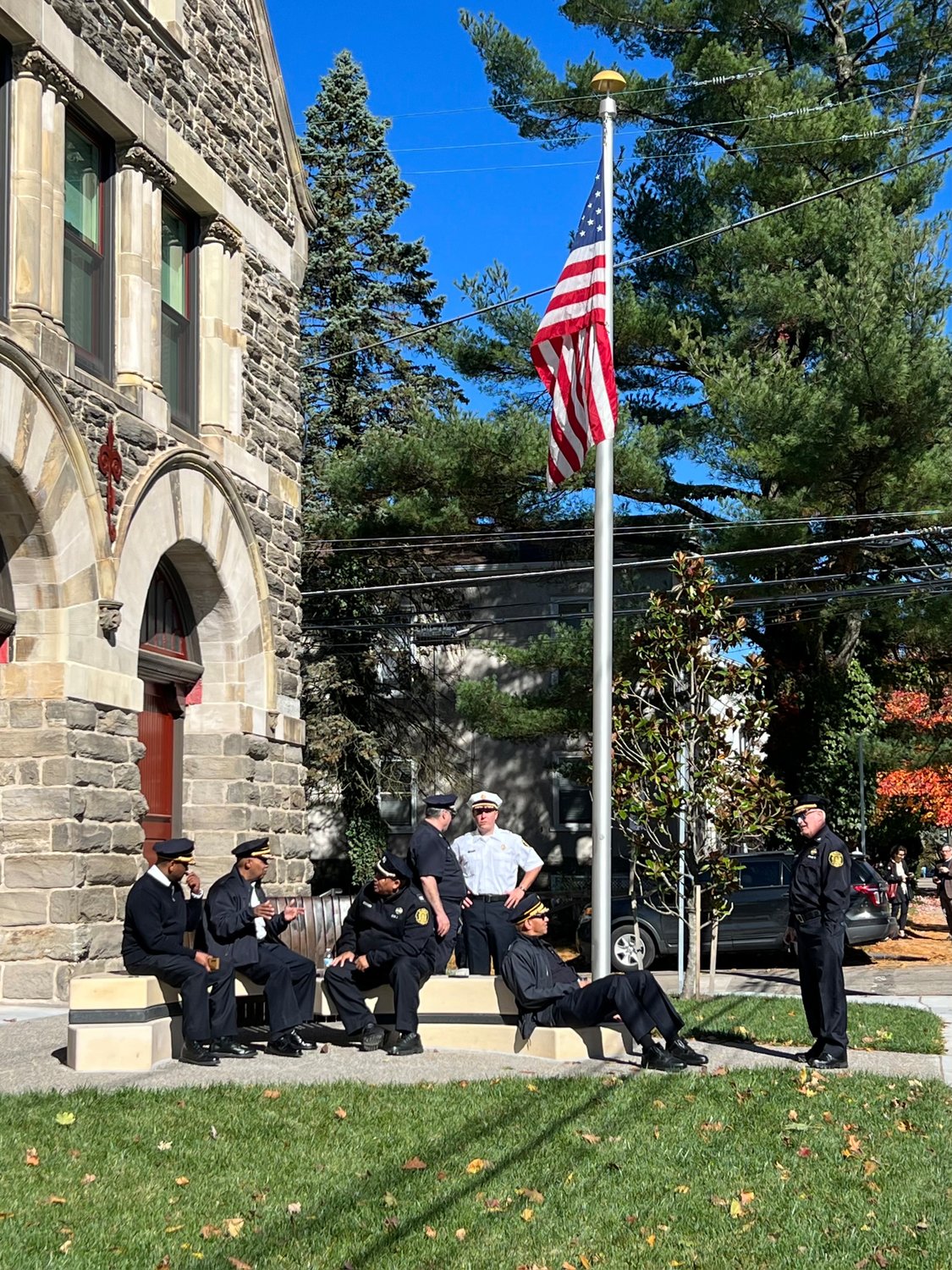 Members of the fire department relax around “Firefighter's Arc,” a sculptural bench designed by artists Jill Sablosky and Erica Ehrenbard, during the ribbon cutting ceremony last week. The art installation, included in the renovation as part of the Philadelphia’s Percent for Art program, was inspired by the building itself as well as firefighters' daily practices. The layered stone seating reflects the sandstone arches in the building, and the hand-forged steel backrest suggests the lines of folded fire hoses.
Photo by Fredda Lippes
Previous Next
Posted Wednesday, November 2, 2022 12:00 am
by Carla Robinson

City and fire officials gathered in Chestnut Hill last week to cut the ribbon on a $10 million renovation and expansion of the Engine 37 firehouse on Highland Avenue, celebrating the completion of a three-year effort to bring Philadelphia’s oldest continuously operated firehouse into the modern age.

“It’s a great feeling to be able to honor tradition while celebrating progress,” Mayor Jim Kenney said, speaking before a crowd of about 50 people.

Cecil Baker, the architect for the project and a Chestnut Hill resident, agreed.

“It’s a credit to both the mayor and the tehmahyor, and the Fire Department that there was never an issue about tearing that building down,” Baker said of the original stone structure. “Philadelphia is full of historic buildings like this one, not all of which get saved. This one was brought back to life.”

Baker said the new addition, which stands apart from the original building, is designed to add to the original structure without overwhelming it.

“Our job was to make the addition not look like a poor cousin,” he said.

Fire Commissioner Adam K. Thiel said the department is grateful for the investment, and thanked the mayor.

“We are thankful to Mayor Kenney and City Council for reinvesting about $300 million in the Fire Department over the past several years. The 3,000 men and women who handle anywhere from 800 to 1,000 incidents per day in this city have seen their department being restored, and they are grateful.”

He also said he appreciates being able to “preserve a piece of the Philadelphia Fire Department’s storied past.”

Engine 37 Captain Ray Saunders used the moment to say that the firehouse belongs to the community, and invited neighbors to visit.

“I hope everyone here walks away with the feeling that this is their department, and that we’re here to serve,” he said. “Especially the children. I really hope that they feel comfortable coming in to see what it is that we do here every day.”

Firefighters stationed at Engine 37 were happy to be settling into their new living quarters.

“It’s a joy to come to work,” said Fire Lieutenant William Polzin. “Before the renovations, the building was a nice piece of history – but it was not up to the standards of a modern firehouse.”

The original firehouse, which first opened in 1894, was designed by Philadelphia architect John T. Windrim in 1894. The building was named to the Philadelphia Register of Historic Places in 2015 and to the Chestnut Hill Conservancy’s Architectural Hall of Fame in 2016.

When the city held the groundbreaking for this project in 2019, firefighters were still squeezing the fire engine through extremely narrow doors originally designed for horse-drawn fire-fighting equipment.

The redesign by Cecil Baker + Partners retains the original 8,678-square-foot facility while adding another 3,408 square feet. The final result is a building that has 21st-century amenities and safety upgrades, as well as a new garage with doors wide enough for today’s fire engines.

The renovation also includes single-occupancy, gender-neutral bathrooms with showers; a new kitchen and locker area; and dedicated exercise and training rooms. The systems also have been designed to minimize carcinogens and other airborne pathogens from getting into the  “house” portions of the station.

There is also a time capsule commemorating the department’s 150th anniversary embedded in one wall.

The first attempt to provide fire protection to the Chestnut Hill section of the city was made during 1872, when Hoseman George W. Shannon organized Hand Engine A. The company was assigned two pieces of apparatus – a hand-drawn, hand-operated pumping engine and a hose cart equipped with 750 feet of leather hose.

If dispatched to an alarm, the company would be assisted by volunteers from the neighborhood. Hand Engine A was disbanded in 1881.

In 1891, Chemical 1 was placed out of service and Engine 37 was organized, and the company moved into the current station at Highland Avenue and Shawnee Street. It has been operating out of that station house ever since.

Engine 37 remained open and continued responding to emergencies during the construction period. Firefighters lived in temporary space carved out of the new garage while the original firehouse was gutted and rebuilt.