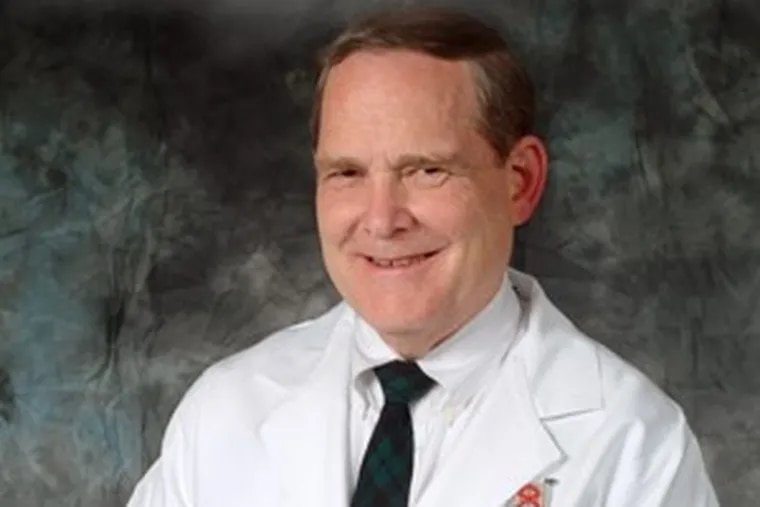 About 12 years ago my wife and I were driving along West Allens Lane, near our house, when we noticed a yard sale at a house on the 500 block. How can you pass up a yard sale? So we stopped and looked through the usual rummage-y fare and bought a couple of books, but more importantly, we met the homeowners, Dr. RobRoy MacGregor 3d and his wife, Peggy, a delightful couple who were, at that point, in their 70s.

When I found out the gentleman was a doctor, I asked him about his practice. I learned that he was a 1964 graduate of Harvard Medical School with the highest honors, an expert on infectious diseases, an early champion of HIV treatment and an emeritus professor at the University of Pennsylvania’s Perelman School of Medicine. I, of course, wanted to write an article about him for the Local, but he modestly declined.

Dr. MacGregor, who pioneered groundbreaking HIV treatment and research programs in the 1980s and founded an outpatient care center in 1988 at the Hospital of the University of Pennsylvania which has been renamed the MacGregor Infectious Diseases Clinic in his honor, died Thursday, May 12, of renal failure at the Cathedral Village retirement community in upper Roxborough. He was 84 years old.

Dr. MacGregor organized conferences on infectious diseases and made 12 trips to Africa during the height of the AIDS epidemic to treat HIV patients there at a time when doctors were not exactly lining up for that job.

“I went with him on four of those trips,” Peggy said. “Rob was excited to be there because they had so many infectious diseases. Almost all of the workforce in Botswana, for example, had HIV, and there was lots of tuberculosis and other infectious diseases.”

“He had a huge heart, and his patients loved him for it,” Penn colleague and friend Harvey Friedman wrote in an online tribute. “He gave his heart and soul to help the ID (infectious diseases) division thrive.”

Dr. MacGregor was a native of Glen Ridge, N.J., and carried the same name as both his father and grandfather. According to his wife, they may have all been named for Rob Roy MacGregor (1671 to 1734), a Scottish folk hero and clan chief who was a Robin Hood-type figure who allegedly stole from the rich to give to the poor (and to himself). A 1995 film, “Rob Roy,” starring Liam Neeson tells the story of his colorful life.

“Rob's great-grandfather, John Angus MacGregor, was a doctor who came from Glasgow, Scotland, to South Dakota,” Peggy told us last week. “Rob did not like his name when he was young because other kids made fun of it, but he grew to like it as an adult.”

Dr. MacGregor went to Princeton University for undergraduate school, and Peggy, who grew up in Cincinnati, went to Wellesley University. They were both singers in university a cappella groups and they met at a college singing event. They married in 1964 and moved to Philadelphia in 1971, when Rob was offered a job at Penn, where he stayed until his retirement in 2006.

They lived in University City for one year and then moved to Mt. Airy in 1972, where they remained for 50 years before moving to Cathedral Village in April of this year.

“When we were deciding where to live,” Peggy said, “I read a book called 'The Education of a WASP' (1970, by Lois Mark Stalvey), in which the author praises Mt. Airy for its successful racial integration, so we moved to Mt. Airy and loved it there.”

Dr. MacGregor was active at Summit Presbyterian Church for more than 40 years and in the 1990s he supported the establishment of the Betak AIDS Hospice in Mt. Airy, which was opposed by some neighbors.

Peggy earned a master's degree in social work from Simmons University in Boston and in her later life she worked at a private special education school in Mt. Airy, then Children's Hospital of Philadelphia and later at a public elementary school in South Philadelphia.

The MacGregors have a son, Matthew, and daughters, Laura and Sarah, who all went to the Houston Elementary School in Mt. Airy. Two went to Central High School, the other to a small private school.

Honoring Dr. MacGregor, his colleagues at Penn posted a message about “his determination and dedication to provide care to the underserved and less privileged.”

In a tribute, his family said he was “kind, fatherly, a doctor’s doctor. He lived his convictions.”

In addition to his wife and children, Dr. MacGregor is survived by two granddaughters, one sister and other relatives. A sister and brother died earlier.