When Dr. Paul M. Farber was growing up in Mt. Airy, he was surrounded by history. He started with that in his talk on public art for the Chestnut Hill Conservancy last week.

Paul Farber, who was born and raised in Mt. Airy and still lives there, is the co-founder of Monument Lab. 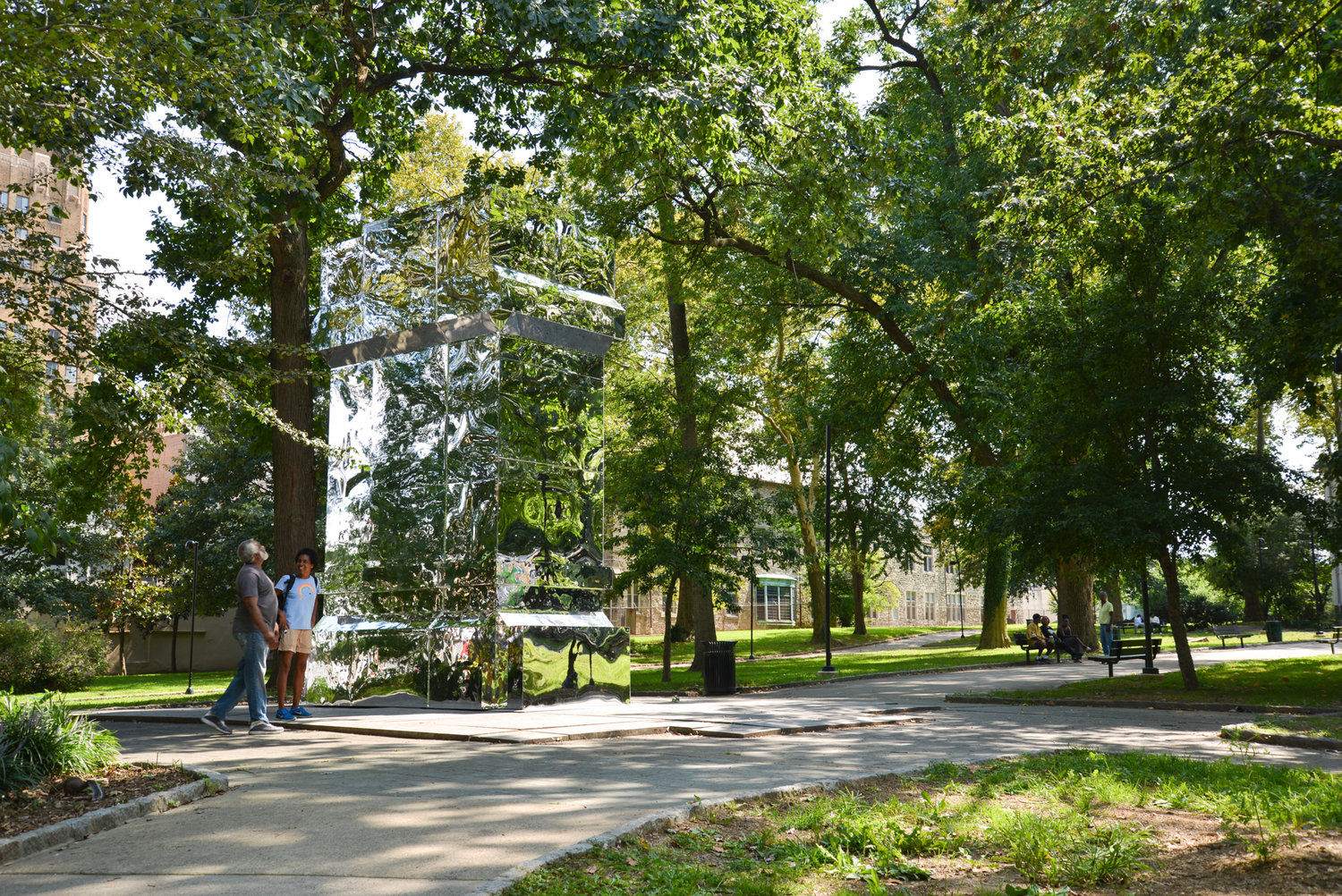 When Dr. Paul M. Farber was growing up in Mt. Airy, he was surrounded by history. He started with that in his talk on public art for the Chestnut Hill Conservancy last week.

“I'm not a history buff, but I'm a memory buff,” he said, mentioning his early days in nursery school at the nearby Germantown Jewish Center. “Some of my earliest stories about history, memory, about social justice happened in the synagogue, and around it in partnership and in solidarity with interfaith partners.”

Farber, 39, lives in Mt. Airy, a few blocks from where he grew up. His parents were in the Zoom meeting. “I was thinking a lot about, not just my own personal memory in Northwest Philadelphia, but places of public memory that are significant,” Farber said.  “Places like Vernon Park, Pastorius Park, Germantown Avenue itself. The cobblestones feel like a profound monument, whether intentional or unintentional, to the past. There are all kinds of places all throughout the Wissahickon these are incredibly important not just for each of us personally, but these are the pieces that hold us together. Hopefully we'll be the means to move them forward.”

The Chestnut Hill Conservancy had invited Farber to talk about the Lab’s latest project. This fall, in partnership with the Andrew W. Mellon Foundation, they released the National Monument Audit, a survey of approximately 50,000 conventional monuments representing data collected from every U.S. state and territory. (monumentlab.com/audit)

The audit is 38 pages but thick with detail. In a survey of over 50,000 monuments in the country, they recorded 29,792 war memorials, comprising 33% all non-individual monuments. Of the 1,690 memorials that mention “Confederate,” only 3% mention “defeat.” According to Smithsonian Magazine, $40 million in taxpayer funds spent to preserve Confederate symbols and sites.

In their Top 50 list of individuals, 40% were born into family wealth, 76% were landowners, and 50% had been slaveowners. Roughly .5% represented enslaved peoples and abolition efforts.

In Philadelphia, the interactive Audit map counts 190 monuments. (According to the Association for Public  Art, there are eight war memorials, 22 historic figures, and 21 “Black and African American Themed,” plus 67 national historic sites.)

The Audit is meant to inform Mellon’s landmark Monuments Project, a $250 million investment designed to “transform the way our country’s histories are told in public spaces and ensure that future generations inherit a commemorative landscape that venerates and reflects the vast, rich complexity of the American story.”

“First, start with [the idea] monuments have always changed,” Farber said. “I know there's an idea that monuments are permanent. But of course, they're always changing. They're changing by the fact of their materiality. Bronze gets patina. Marble is affected by rain. A lot of the early American statues built with lead caved in on themselves, or the metal was stolen or even nibbled out by squirrels.” The audit found the first recorded statue removal in the States was July 9, 1776.

In response to a question about whether Philadelphia’s blue history markers count as monuments, Farber paused. “I think that the study of monuments has largely privileged those things that are conventional monuments and not other platforms. In the city of Philadelphia, when you ask what's an appropriate monument people give you murals, they give you mosaics, they give you the Pennsylvania Historical Commission signs. This is something local. That's different when I go to Cleveland, Ohio, or Minnesota, or the Four Corners region or Alabama.” There are 327 Pennsylvania Historic Markers, including the latest one commemorating John Trower (1849-1911), an African-American restauranteur in Germantown. (The Association for Public Art lists thousands of public art works in Philadelphia, though not all public art is considered a monument. There’s everything from Ben Franklin (1789) to Rocky (1980).)

Monument Lab defines a monument as “a statement of power and presence in public,” and Farber’s not surprised so many were the focus of resistance in the past year. Both a Frank Rizzo mural and sculpture were removed, while a Christopher Columbus statue in Marconi Plaza has stayed in place but covered. “When there are moments of questioning and striving and democratic action and even uprising, I'm not surprised that monuments are places that are magnetic,” said Farber. “I say this a lot and it will sound cheeky, but I believe it's much easier to gather around and question a statue than a statute.” The Lab started keeping a Toppled Monument Archive.

The non-profit public art and history studio began as a university classroom project in 2012 and has grown into an internationally known civic studio centered in the idea “monuments must change.” In 2018 they published “Monument Lab: Creative Speculations for Philadelphia,” about a 2017 public art project to engage the public in rethinking what a monument could be. In 2021 they developed “OverTime,” an augmented reality app with Germantown poet Ursula Rucker that displays a series of virtual historic markers that pop up and come to life as you go closer to them. The Art Museum steps, and the Rocky statue, are a prime feature.

Their next big project is Re:Generation, a nationwide participatory public art and history project from May Day to Labor Day 2022. Supported by the Andrew W. Mellon Foundation’s Monuments Project, the goal is to “elevate the next generation of monument.” The project subgrants a total of $1 Million across 10 local field offices led by collaborative teams working on a commemorative campaign rooted in the living history of a neighborhood, city, or region. In Philadelphia, the focus will be “sisterly history” to preserve the past and present legacy of Black women poets in Philadelphia. Team members include poet Yolanda Wisher and Trapeta B. Mayson, the 2020-21 Philadelphia Poet Laureate.

George McNeely, the Conservancy’s host for the evening, closed the evening. “I think what your audit has so clearly stated is the concept of a monument in the past is largely outdated, and does not reflect the U.S. as we are today. I thought you gave some great examples of ways that monuments can open up and engage.”