George Drakopoulos’s Malelani Cafe, located at the corner of Germantown Avenue and Pelham Road, was broken into last Sunday for the second time in about a month. 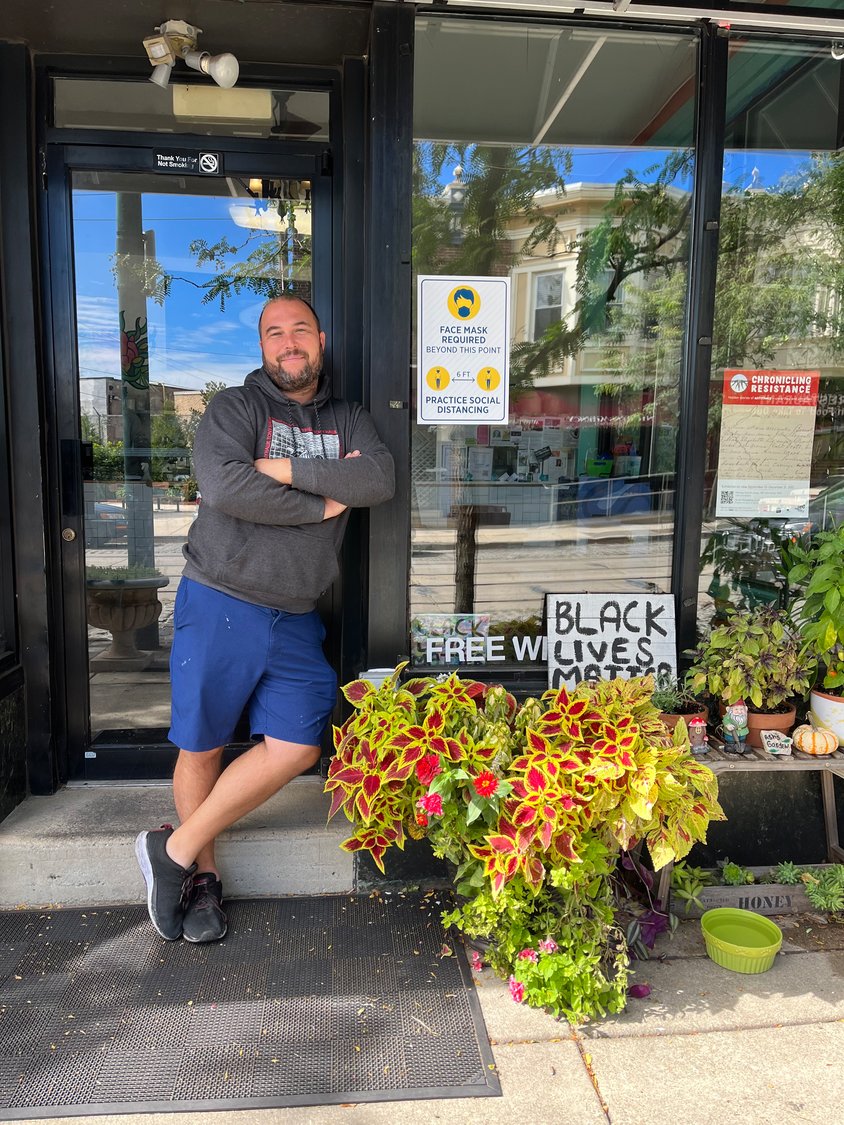 George Drakopoulos, owner of Malelani Cafe on Germantown Avenue, says businesses like his need to work together in order to keep burglaries at bay.
Photo by Carla Robinson
Posted Wednesday, September 28, 2022 12:00 am
by Tom Beck

George Drakopoulos’s Malelani Cafe, located at the corner of Germantown Avenue and Pelham Road, was broken into last Sunday for the second time in about a month. One of his employees found the glass broken on the front door.

“Sunday morning we found the window smashed,” said Drakopolous, who also got an alert from his alarm company at about 4 a.m. “The door that they broke into [the first time I had replaced with really strong glass but they were still able to get in there [a second time].”

When the robbery occurred, Drakopoulos was in Jim Thorpe where he had been attending a wedding.

“I had to rush from the wedding to meet the police around 10 a.m.,” he said. “There was an officer with an employee waiting for me. A detective came and he did prints and scoped out the whole scene.”

Drakopoulos told the Local the burglars took the whole register, which had $100 in it.

“Our alarms went off, but the fortunate thing was they didn’t get anything,” said Zsa’s owner Danielle Jowdy. “The alarm kept them moving and they were in and out in less than a minute.”

Jowdy said the burglars fled from inside the store when they realized there was no cash in the register, according to security footage.

“We always leave the drawer open,” Jowdy said. “When they saw it was empty, that's when they headed straight back out.”

Despite being burglarized, Jowdy feels she was “lucky” because the only damage sustained to her business was a 10-by-10 foot piece of glass on her front door.

“We were fortunate to have it repaired relatively quickly,” she said.

Jowdy, who lives only 10 minutes from her store, was awakened by a notification from her alarm company, which was sent at about 4:15 a.m. When she arrived at her store about 15 minutes later, the police were already there.

“We have some great neighbors who live above us and heard the alarm go off,” she said. “They were also waiting for me when I got there.”

Police said an undetermined amount of money was taken from the register at Grocery Outlet Bargain Market when it was robbed at approximately 4 p.m. on Monday.

Jesse Wade, a 33-year-old Mt. Airy resident of the 6500 block of Ross Street, was later arrested in connection with the robbery. A weapon was recovered during that arrest and the investigation is being handled by Northwest Detectives Division. Police told the Local they don’t know whether Wade was also involved in the Malelani Cafe and Zsa’s Ice Cream break-ins.

Philadelphia police say that in those two robberies, a suspect has yet to be arrested. The investigations are active and ongoing at Northwest Detective Division.

“It’s a telling sign of what’s happening in our neighborhoods,” Drakopoulos said. “It definitely feels like it's getting worse.”

Ken Weinstein, who is chair of the Mt. Airy Business Improvement District and also Drakopoulos’ landlord, said there’s “clearly a trend of break-ins happening,” which he called “concerning.”

“It’s not good for Mt. Airy,” he added. “It’s clearly a trend around Philadelphia and the country and we just need to have our eyes open and anticipate what’s next.”

“We are following up to ensure that local businesses have access to this information, as well as tips on smart shopkeeping practices and free police resources available to them,” said Philip Dawson, executive director of the Mt. Airy CDC, which owns Zsa’s property.

Dawson said he was “saddened” by the recent burglaries.

“I applaud our 14th District police officers for quickly apprehending the perpetrator of Monday's robbery and hope that they are equally successful in bringing those behind the nighttime burglaries to justice,” Dawson said. “Mt. Airy is fortunate to have experienced such incidents only rarely in the past, but Mt. Airy CDC has quickly moved to assist merchants in proactively planning for safety at their businesses.”

Josephine Winter, executive director of West Mt. Airy Neighbors, said that her organization was in the process of reaching out to community members whose businesses have recently been victims of crime.

“We have been contacted by several residents about the up-tick in burglaries of our beloved businesses, and recognize that we need an action plan to address this issue as a community,” she said. “We hope to work with neighbors, as well our partner organizations in this effort, including the CDC, BID, and East Mt Airy Neighbors."

Jowdy said she’s working on ways to have her business better illuminated at night, which she thinks will deter crime.

“We have a very visible camera on the side of the building right outside our front door where we were broken into,” she said. “That obviously didn’t deter the person who broke in on Sunday morning, but you take these preventative measures to be smart and have a sense of security and protection.”

Jowdy praised the support she’s gotten from the rest of the Mt. Airy business community.

“We all communicate with each other when there’s something that happens that’s suspicious,” she said. “I’m just very grateful that everybody stayed safe and the damage was minimal.”