Two more Chestnut Hill Local readers have reached out to the paper to report instances of checks being stolen from the mail. 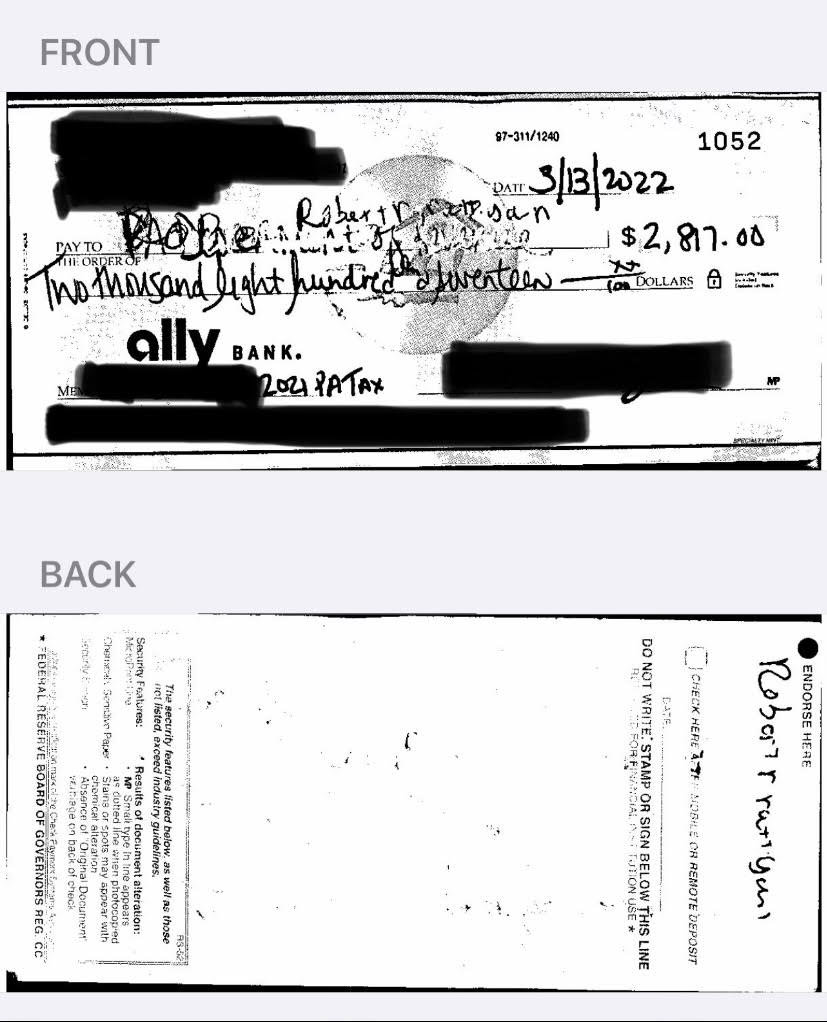 This redacted photo of a check written to the PA Department of Revenue shows that original words have been clumsily scribbled out and replaced with a name beginning with “Robert.”
Posted Wednesday, July 6, 2022 12:00 am
by Tom Beck

Two more Chestnut Hill Local readers have reached out to the paper to report instances of checks being stolen from the mail.

The first source said he wrote a check for $2,817 to the Pennsylvania Department of Revenue that was stolen after he dropped it in the mailbox outside of the Chestnut Hill Post Office on Germantown Avenue. The check was dated March 13, 2022, and mailed that same day.

“After a couple weeks went by, I realized the check hadn’t been cashed by the state,” said the source, who did not want his name disclosed in this article. Then, “a week later, I realized it had been cashed.”

The source told the Local that his bank, Ally Bank, informed him that the check had been deposited at an unknown Wells Fargo branch.

Unlike other instances of bank fraud, this particular check hadn’t been washed. Pictures of the check show that the words “Pennsylvania Department of Revenue” had simply been scribbled out and replaced with a person’s name, which begins with “Robert.” The last name isn’t entirely legible.

“We’re convinced it’s an inside job at the bank,” the source said. “There’s no way a trained employee or professional would cash this check.”

The source said he filed a police report, but his money has not yet been returned. The Local reached out to Wells Fargo for comment but did not receive a response by press time on Tuesday.

“It’s not even about the money,” said the source. “It’s the principle. We’re not doing too badly [financially], but there’s families out there where $2,800 is a lot.”

The Local also received another phone call last week from a reader who said that he and his spouse were also victims of check fraud.

He said that two checks he had mailed at the same time from his home mailbox on May 18 never arrived at their destinations. One of the two had been washed and deposited at a KeyBank ATM in an unknown location the very next day. The other appears to have been lost.

“When we found out that the check was a fraud, we called the bank and they immediately reversed the charges,” said the source, who also asked the Local not to reveal his name. “Obviously the criminal was able to withdraw the funds.”

The source said the $1,100 check, which was originally written to their landscaping company, was washed and rewritten for $11,580.37. They washed the entire check except for the source’s wife’s signature.

Unlike previous sources who have had negative experience with their banks, this source says his bank, Citizens Bank, made the process easy.

“Citizens has been great to work with,” the source said. “They moved our money into a new checking account.”

The biggest problem they’ve faced, the source said, has been keeping track of recurring charges on autopay and changing all the subscriptions from the old bank account to the new one.

The source filed a police report, but said so far they haven’t heard from police about whether their case is being investigated.

These two recent incidents come on the heels of a series of check fraud and mail fraud claims from readers of the Local, which range from more instances of check washing, checks allegedly being stolen from inside the Chestnut Hill Post Office and money being mysteriously drained from one couple’s savings account after a check of theirs went missing in the mail.

Philadelphia Inquirer columnist Joseph N. DiStefano chronicled his own experience of losing $5,620 to check washing in one of his columns last month. DiStefano’s money was not returned until a month later, he wrote.

In DiStefano’s article, Christine Davis, chief risk officer at WSFS, the largest bank based in the Philadelphia area, said that “fraud schemes have certainly trended upward” and that the bank has had “I’d say, a triple increase in check washing over the past few years.”

One source DiStefano spoke to, Michael Lawson, a retired Wilmington city police detective turned Artisans’ Bank official who chairs the Delaware Association for Bank Security, said that the best way not to be a victim of check fraud “is to stop writing checks and to pay all bills electronically.”

According to the Federal Trade Commission, consumers reported losing more than $5.8 billion to fraud in 2021, which is a more than 70% increase over the previous year.