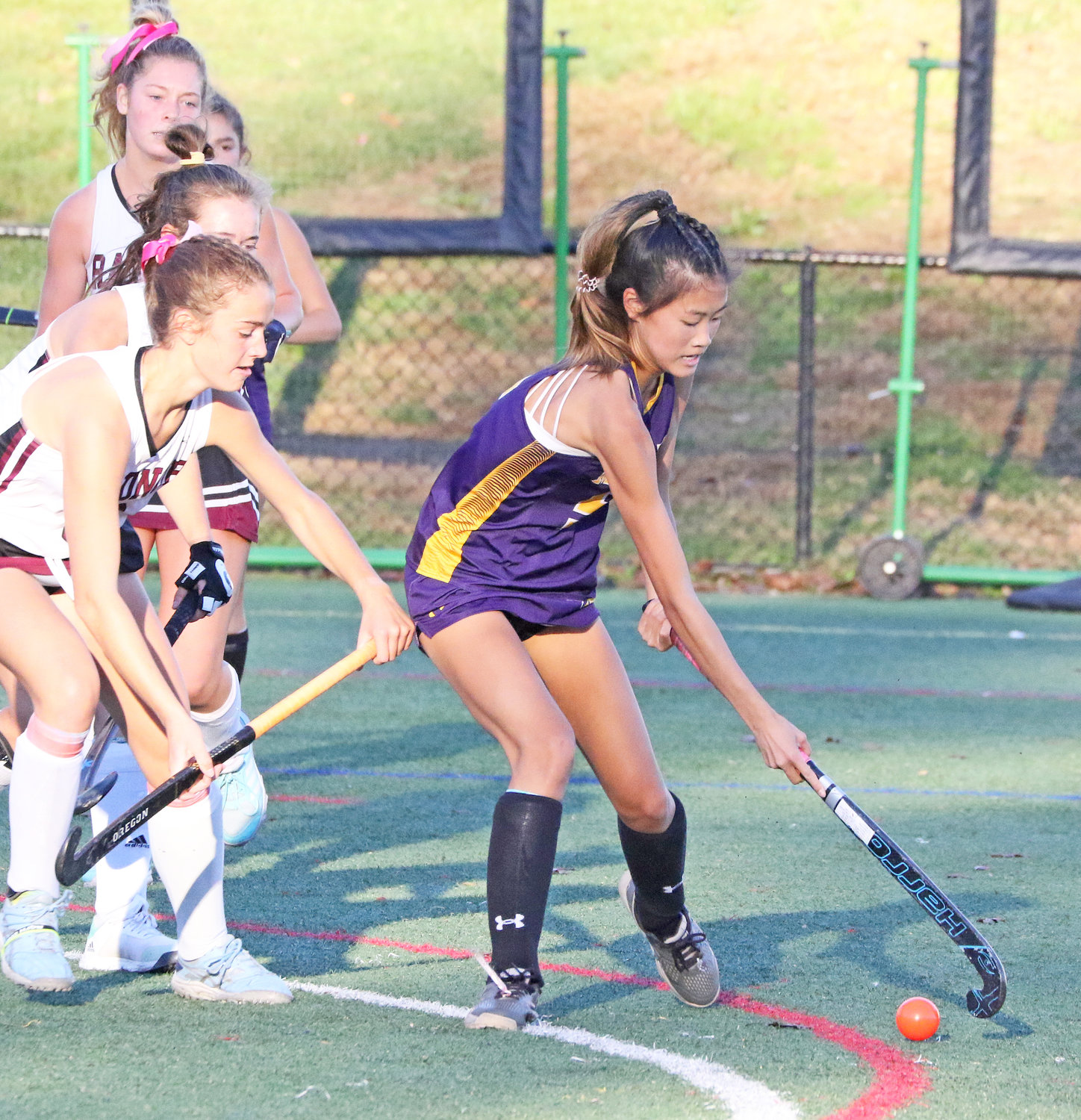 Sophomore Sienna Noh, who scored the Mount's first goal in the Lower Moreland win, maneuvers with the ball at Radnor on Thursday.
Tom Utescher 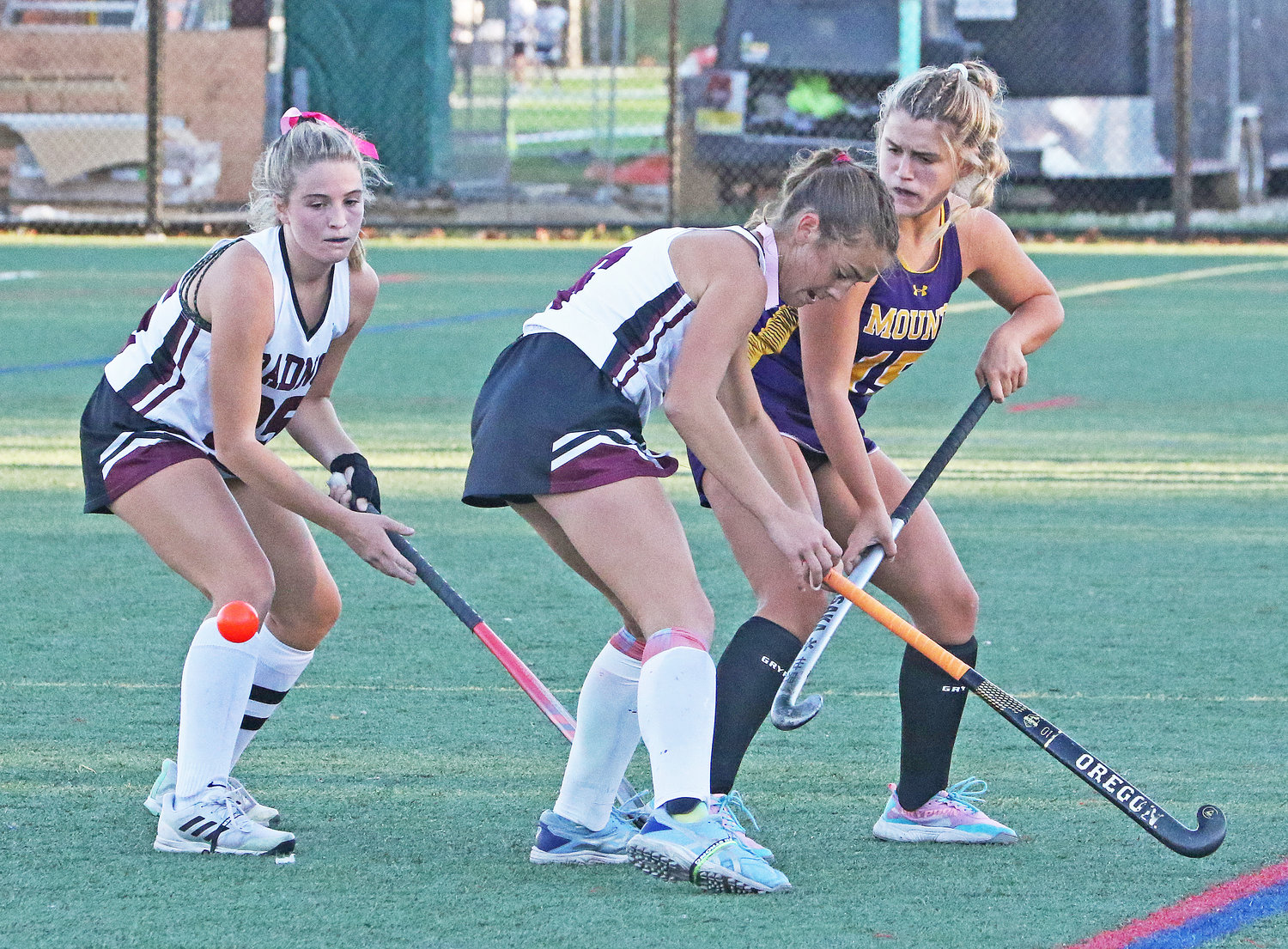 Near the left sideline, Mount freshman Avery Lasky (right) flicks the ball past a pair of Radnor players.
Photo by Tom Utescher
Previous Next
Posted Wednesday, November 2, 2022 12:00 am
by Tom Utescher

Last week Mount St. Joseph Academy won its first game in the PIAA District 1 Class AA field hockey tournament and lost its second, meaning that the Magic will now need to take a more roundabout route in order to reach the state tournament.

With last Tuesday's 5-0 victory over the district tourney's 11th seed, Lower Moreland High School, sixth-seeded Mount St. Joe advanced into a quarterfinal contest against number three Radnor High School on Thursday. After a first-quarter goal by the host Radnor Raiders, the score remained 1-0 into the fourth period, when Radnor tacked on two more points for a 3-0 win and a trip to the semifinals.

Five teams from District 1 will advance to the PIAA state tourney, so one of the four losing teams from Thursday's semifinal games will now need to win two games in a "play-in" bracket to punch its ticket to States.

Here, the Magic were lined up for a November 1 play-in semifinal against a colleague from the Athletic Association of Catholic Academies, seventh-seeded Merion Mercy. Merion lost 6-1 on Thursday to the AACA's Villa Maria (seeded second), while in the top half of the main draw, number one seed Gwynedd Mercy also sent through to the semifinal round.

In Tuesday's round of 16 game against Lower Moreland, the Mount led most of the way thanks to an early goal by sophomore Sienna Noh. Freshman Katie Tropiano then scored a natural hat trick against the Lions and junior Grace Kyle put in the fifth goal.

For Thursday's quarterfinal at Radnor, the Mount was missing an ailing Aisling Scibelli, one of its senior captains.

The Raiders took the ball up into the Mount circle at the start of the game, and their progress was stopped by MSJ sophomore Joie Katsock. Moving up on the attack, the Magic brought the ball down to the right endline and centered it, but the Mounties also committed a foul on the play and lost possession. Later, on a corner, the Mount receiver hit a ball that hopped in the air and was turned away.

The Magic got off a better shot just after that, but the keeper made a kick save near the right post.

Radnor was on the offensive in the latter past of the first quarter. The Magic's senior goalie, Nora Haney, stopped a shot by the hosts' Alex DeCain, but the next time the Raiders got in the circle, Sadie Schultz drove the ball from the middle of the scoring area and teammate Angela Esgro was waiting at the goal line to score on a tip.

There were 32 seconds left in the first frame, and right at the end of the quarter Radnor had another corner opportunity but did not convert.

Radnor had the greater share of ball possession the rest of the afternoon, though the Mounties made occasional attacks. In the middle of the second quarter a flick toward the left post by junior Sabrina Borzi was saved, and the count was still 1-0 at halftime.

That figure did not change in the third quarter, although both sides had chances. The Raiders finally secured an insurance goal with 2:07 elapsed in the fourth period. DeCain launched the ball in from high in the circle on the left.

A little over a minute later the Magic attacked up the right wing, but when they angled into the middle, a shot by senior Devin Loome struck the outside of the sideboard on the Radnor goal cage. When Radnor's Sophie Green scored the final goal of the day on a hard drive with 7:36 remaining, MSJ's Haney was injured on the play. Freshman Lexi Kelly played in the Mount goal the rest of the game.