Mt. Airy activists march in New York to save planet

Mt. Airy activists march in New York to save planet 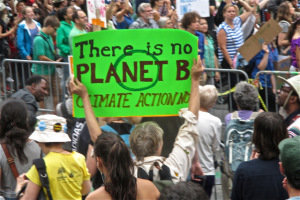 A couple weeks ago, I was reading Greg Williams’ blog in which he talked about life after closing the Walk A Crooked Mile Bookstore at the Mount Airy Train Station, which he ran for 18 years. He spoke about seeking “the place where one’s bliss meets the world’s need.” Greg said he had just discovered a group called Pennsylvania Interfaith Power and Light, “a community of faith-based organizations responding to climate change as a moral issue,” and that he was planning to go with them to the People’s Climate March in Manhattan on Sept. 21.

My wife Zipora and I decided that it was something we’d like to participate in, so Greg got us a couple of tickets on a bus chartered by congregation Mishkan Shalom in Roxborough. Our bus captain, Susan Saxe of Mount Airy, had sent out an email describing in detail when and where to meet and what to bring. I arrived at the departure site promptly at 7:45 a.m., fully intending to sleep on the bus. Alas, it was not to be.

There were speeches over the bus intercom, including a beautiful prayer for nature from Rabbi Julie Greenberg, who had officiated at our wedding eight years ago. Then our captain gave us texting information and outlined a cell phone buddy system designed to keep anyone from getting lost. About this time, I noticed that I had lost my hat. Not two minutes later, it was announced that a hat had been found, and it was passed back to me, bucket-brigade style. I mentioned to a fellow passenger that Catholics pray to Saint Anthony for help finding lost items.

“What do Jewish people do when they lose something?” I asked. “We find it!” he said.

I was finally starting to get comfortable for my extended nap when the folksinging began: “Jacob’s Ladder,” “Morning Has Broken” (which, unfortunately, it had) and many others, culminating in “He’s Got the Whole World in His Hands.”

Two hours and 99 verses later, we arrived in New York. Everyone had a sign announcing what they were marching for. Greg Williams had a picture of his one-year-old granddaughter, and he was wearing notes from children at a West Philly elementary school where he volunteers, stating what they hoped for the planet and what they are doing to make a change. “I told them they could ‘pin their hopes’ on me,” he said.

I had a sign saying simply “Animals” since I felt they needed to be represented too, as much maligned and imminently endangered residents of the planet. Not to mention the 65 billion cows, chickens and pigs crammed into factory farms that greatly contribute to global warming.

Zipora and I tried to enter the march at 72nd street and Central Park West, but it was already in a state of human gridlock, so we hopped on a subway and headed down to Columbus Circle, where we found a step to sit on and watch the parade.

And what a parade it was. Awesome by any standard — diversity, energy, creativity or sheer numbers. Hour after hour, a tsunami of totally engaged activists passed by. Every age, religion, ethnicity, you name it, was there: schools, labor unions, religious groups, professional organizations, indigenous peoples, immigrants and visitors from all over the world, including the French Minister of Ecology and Secretary General of the United Nations.

Everyone was demanding justice, not just for themselves but for all creation. And in spite of the seriousness of the cause, it was a joyous crowd, musical, mirthful and friendly. Perhaps it was because we were all so inspired and encouraged by the unexpected magnitude of the turnout.

It was good to know beyond a doubt that there are people who actually believe in climate change, science, representative government and international cooperation. These people looked like America to me, like the world. There are so many images that stick in my mind: the giant ark, the animal costumes, the wickedly funny signs and the many inventive representations of Mother Earth.

And then there was the topless woman who rode down the parade route atop someone’s shoulders. She created some global warming of her own in the audience and sent everyone (including me) scrambling for their cell phone cameras. If you want to see that photo, you’ll have to come over to my house.

In the meantime, I would suggest that everyone, whether you were there or not, check out some of the many photo collections from the march online. It was like no other, and it might just restore your faith in humanity.

As we boarded our fossil fuel-burning bus to return home, a text from the march organizers urged us to continue the fight in the months and years ahead. There were over 300,000 people in the march. That’s like 15 army divisions — enough to topple governments but still not enough to change the world. Not even enough to get decent media coverage. It’s just not “news.” Real change will require persistent effort at the grassroots level, but for one brief day, we felt like we had the whole world in our hands.

You can reach Jim Harris at jimbob@jimbobsjournal.com. And you won't have to use up any fossil fuel to do so.