When West Mt. Airy resident Susan Russell and her business partner Lucy Noland launched their publishing company, Archimedes' Printing Shoppe & Sundry Goodes, in late 2019, there was no way they could know, of course, that the crippling coronavirus pandemic was just around the corner like a snake, waiting to strike. 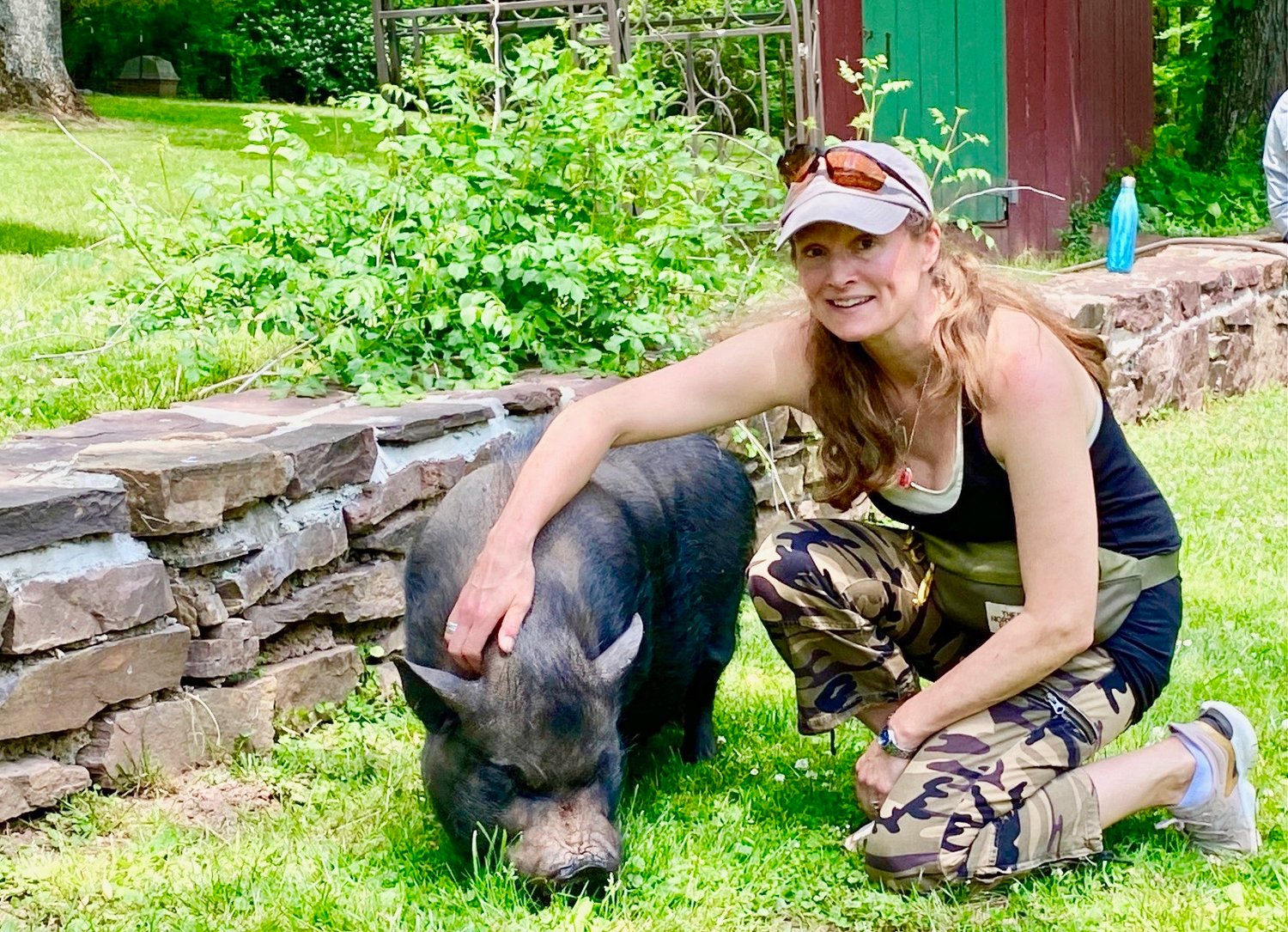 Mt. Airy's Susan Russell has fun at Ross Mill Farm in Jamison, Bucks County, with a resident pig who requested that his name not be used. (He may be in the Witness Protection Program.) 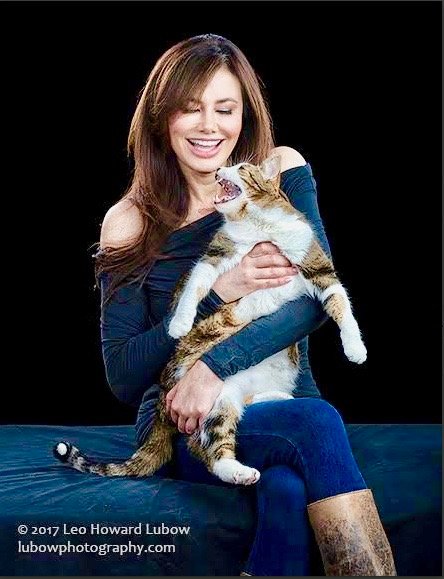 Lucy Noland, a native of Saigon, Vietnam, seen here with her cat, Ross, is a partner in the new publishing company. Winner of numerous broadcasting awards, Noland was an anchor on Channel 29 for five years until June of 2019. (Photo by Leo Howard Lubow)
Previous Next
Posted Friday, June 25, 2021 10:00 am
by Len Lear

When West Mt. Airy resident Susan Russell, who has six cats of her own, and her business partner Lucy Noland launched their publishing company, Archimedes' Printing Shoppe & Sundry Goodes, in late 2019, there was no way they could know, of course, that the crippling coronavirus pandemic was just around the corner like a snake, waiting to strike. (When I asked the duo, “Do you mind if I ask how old you are,” Russell said, “We like to think we're kinda ageless!”)

Russell, was previously a director of the municipal animal shelters in Chicago and Philadelphia — ACCT Philly — in their life-saving efforts. A writer, lawyer, animal advocate and volunteer, Russell has also authored the award-winning coffee table book, “A Ruff Road Home: The Court Case Dogs of Chicago,” and has self-published three children’s books: “Shelter Dog Kisses,” “We Can’t Go There, We’re Bears” and “Mr. Bird and Mr. Cat: How ‘Bout That!”

“But we’ll be honest,” Russell said last week. “It ain’t easy promoting books during a pandemic. No book signings. No appearances. We took a break on the hard promotions, and now that we’re 'maxxx vaxxxed,' two shots and more than two weeks on, we are gearing up to get things back into motion. We’ll be focusing on local shops and indie books stores, as our little collection of books and goodes is growing.

“We think there’s a market for funny children’s books about trap-neuter-return, the most innovative and humane way to manage community and feral cat populations, so we’re going to keep putting the books out there! Lucy would like me to tell you that she believes our 'Gata Unbound' is really an all-ages book.

“It’s available now on our website, and we’ll be kicking that off with a book signing accompanied by a fundraiser for Mac’s Fund in partnership with Morris Animal Refuge on July 22 at the Philadelphia Brewing Company! The amazing folks at the brewery are big cat people and actually take care of a colony of cats. Kaity Lacy, our wonderful artist, is currently illustrating Volume 3, Book 5.”

Russell was born in Nova Scotia and  grew up in St. John’s, Newfoundland. “My dad was a Mountie, so we moved a little bit but not a lot. My roots are firmly planted in the rocky Newfoundland soil, though ... I had some pretty incredible experiences growing up in that beautiful, rugged province. I love nothing more than to sing old Irish songs while holding a glass of whiskey, and I heavily suspect I might be a reincarnated old Irish man.”

Anyone who has watched the 10 p.m. news program on Channel 29 will recognize Noland, a native of Saigon, Vietnam, who was an anchor on Channel 29 for five years until June of 2019. Her TV work has earned her Emmys, Golden Mics, Edward R. Murrow and AP Broadcasters awards as well as awards from humane organizations.

The Noland/Russell business was born when they realized late in 2019 that they are both terrific storytellers, that they both love animals and have advocacy in their DNA. So after a couple — or more — glasses of wine at a vegetarian restaurant, they mapped out the concept for the “Gata Unbound” series and the characters, especially the cat stars. Following that, the writing began.

“Then we decided to start a little publishing company. We not only launched the 'Gata' series, but also the 'A--holes' series about the real-life antics of a pig, a rooster and a dog, who all happen to be very lovable a--holes ... Our first book in the series, 'A--holes Need Love, Too,' has a little something for everyone.”

After last November's Presidential election, the publishing duo believed that “A--holes Need Love, Too,” was a good book for friends and family on both sides of the political spectrum to gift to one another. “We still recommend it,” said Russell, “not only as a fabulous bathroom read but as a comical balm to douse heated conversations at the dinner table. The first 'A—holes' book did OK but met the same roadblocks as our first 'Gata' book (pandemic). We’re excited that the second book in the series, 'For the Love of A--holes,' will be out soon. And like the first book, these stories are based on real-life happenings on a farm in New Jersey.”

When asked if they are vegetarians, Russell replied wryly, “Yes, but let me clarify: All of the vegetables we eat have been humanely raised and slaughtered.”

For more information, visit archimedesprintingshoppe.com. On the website there are lots of t-shirts, cards and other animal-related merchandise in addition to the books. Len Lear can be reached at lenlear@chestnuthilllocal,.com