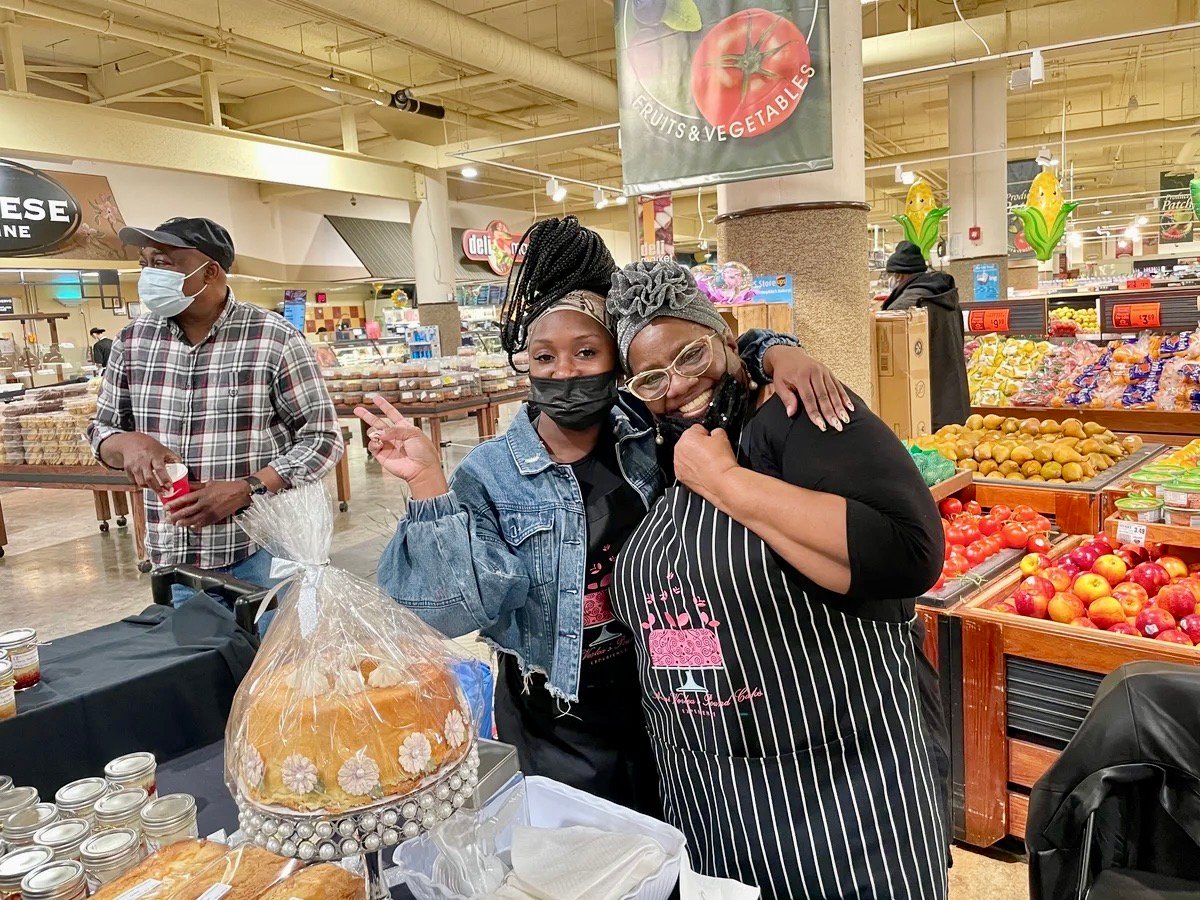 Mercer (right) with her baked goods at a pop-up event at the Brown's ShopRite supermarket in Roxborough with her niece, Ryshawna Fisher. Mercer’s husband, Lyman, is on the left. 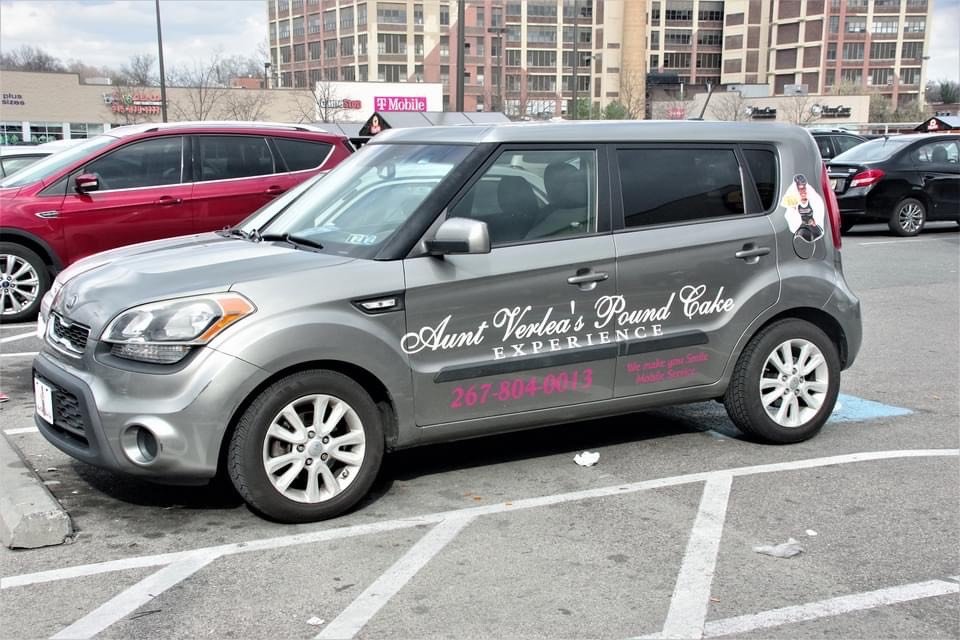 Mercer delivers her cakes all over the Delaware Valley, even to South Jersey and Delaware. 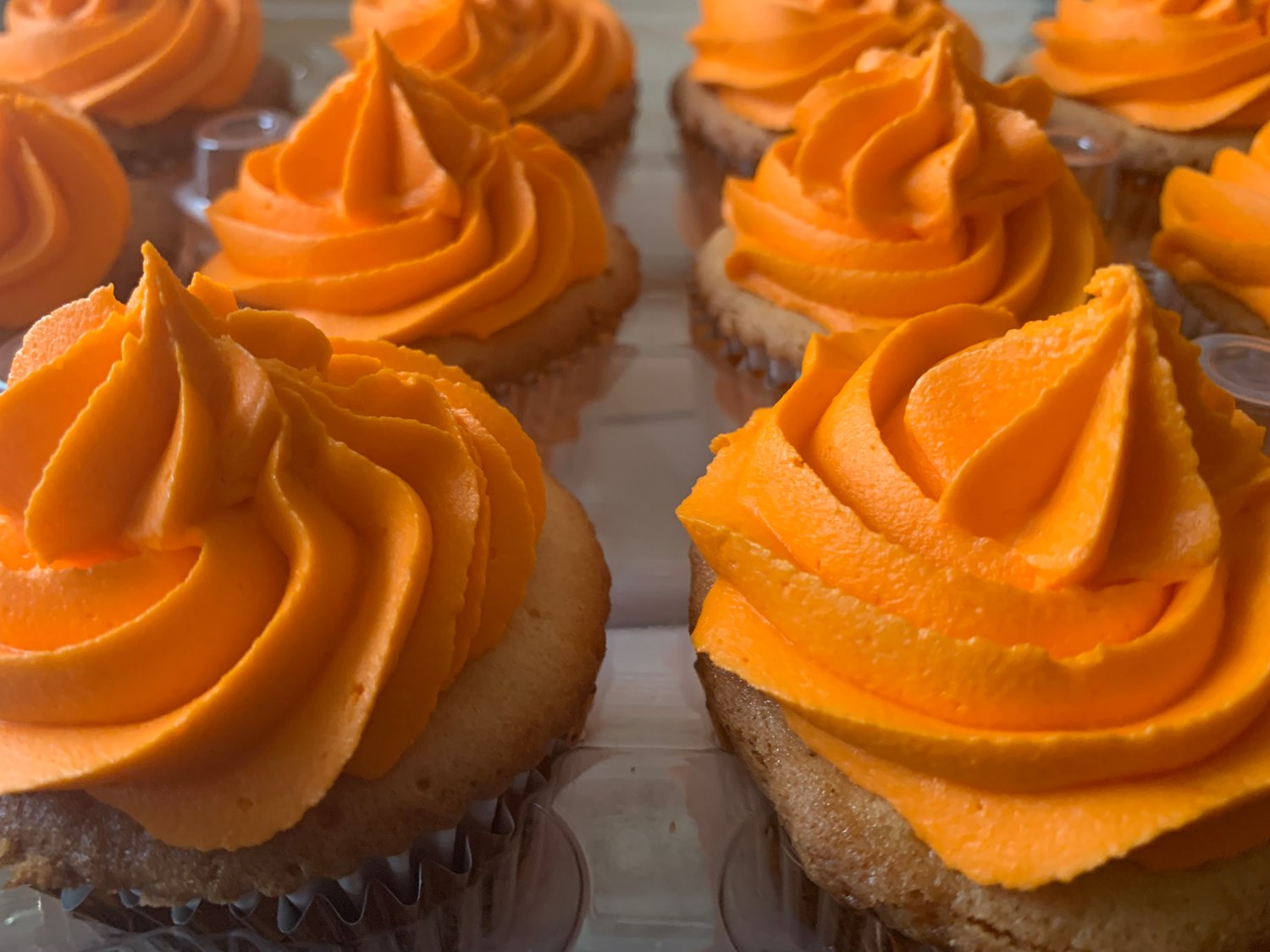 Mercer cannot make enough of her cupcakes to keep up with the demand.
Previous Next
Posted Thursday, August 11, 2022 12:00 am
by Len Lear

You might even say that Mercer, who recently received a small business grant of $10,000 from Comcast, is not just baking for the upper crust, is not very kneady any more and rarely goes against the grain. In fact, her growing list of regular customers insist that sampling her many different baked goods is the yeast they can do.

“I used to give them away,” Mercer said of the buttery confections. But after she was unemployed for two years and couldn't find work, Mercer turned to a higher power. “I asked God for help, and He said, ‘Didn't I show you how to make a pound cake?'”

Mercer’s circuitous route to a culinary career began almost four decades ago, but the first sign may have been when she was 13 years old and made a pound cake for her grandfather on his birthday.  The family couldn’t afford to buy him a cake, so Mercer asked her Aunt Verlea for her recipe.

Mercer went on to graduate from William Penn High School. She married at 16 and later had three sons, so her education was put on hold for several decades. After she went back to school at Community College of Philadelphia, she graduated with honors, then earned a bachelor’s degree in psychology, behavioral health and human services from Chestnut Hill College at the age of 58.

Meanwhile, she began working as a classroom assistant in the School District of Philadelphia, helping to teach reading and math to special needs children. She worked for many years at Leeds Middle School in East Mt. Airy, which is now closed. “I loved working with the special needs children,” she said.

While working for the school district and also serving as an assistant pastor at Bethel Deliverance Church in Cheltenham, Mercer baked part-time.

“ I started the business with $10, and I have never borrowed a dime. Aunt Verlea had given me her recipe, but I eventually created my own. I kept trying again and again until I got it just right. I use the name Verlea as a tribute to my great-grandmother, aunt and cousin, who all had that name, but it was my aunt who inspired me.”

Mercer eventually began baking full-time and offering an expanded menu that includes banana pudding, cobblers and cupcakes, all while building a business that included restaurants who sold her desserts.

“During the pandemic,” she said, “my four restaurant clients stopped buying because they were closed or cut way back. I was just starting to see a profit when the pandemic started, but I was not shaken because of my faith. For one year I had no business, but I still had to pay the full rent for the commercial kitchen [in Chestnut Hill]. Now things are coming back. I am usually baking in the kitchen three to five days a week, and on the other days I am trying to get new clients. Only one of the four restaurants I used to bake for came back after the pandemic. That is Sister Muhammad's Kitchen in Germantown.”

Comcast learned about Mercer at an event for City Councilwoman Cherelle Parker. A representative tasted her products, and they were hooked. She wound up making desserts for 600 people attending a Comcast event last December. The company not only continued to retain her services for other events, but awarded  her a $10,000 Comcast RISE Investment Fund grant to help her recover from the impact of the pandemic.

“Romona is a wonderful and generous person, said Jennifer Bilotta, vice president of communications at Comcast. “I bought her cupcakes, and everyone loves them. I am glad to use her personally and professionally. Her baked goods are outstanding.”

Mercer also has numerous private customers and does desserts for weddings and birthdays. Last Saturday, she made 250 cupcakes for a wedding. She also recently received a $2,000 grant from Brown's ShopRite stores, and she was signed up to do pop-up events with her baked goods at ShopRite supermarkets throughout the city.

She is booked for a different ShopRite every other Saturday, 11 a.m. to 4 p.m., September to December. She will be at the Roxborough store Sept. 10 and will do a pop-up on Sept. 14 on the 7100 block of Germantown Avenue in Mt. Airy at the community’s Supper Sessions food festival.

“I really enjoy the pop-ups, and we usually sell out,” said Mercer, who also thanked supermarket executive Jeff Brown for the opportunity. Brown operates ShopRite and Fresh Grocer markets in the area. But Mercer reserves a special thanks for her husband of 27 years, Lyman, whose help has been invaluable, Mercer said, “If it was not for him, I could not have done this.”

For more information, call 267-804-0013 or visit https://auntverleas.square.site. Len Lear can be reached at lenlear@chestnuthilllocal.com