Oscar Johnson  and his family are celebrating his 100th birthday with a dinner for 12, surrounded by the festive Christmas decorations that he loves. Photo by Kristin Holmes 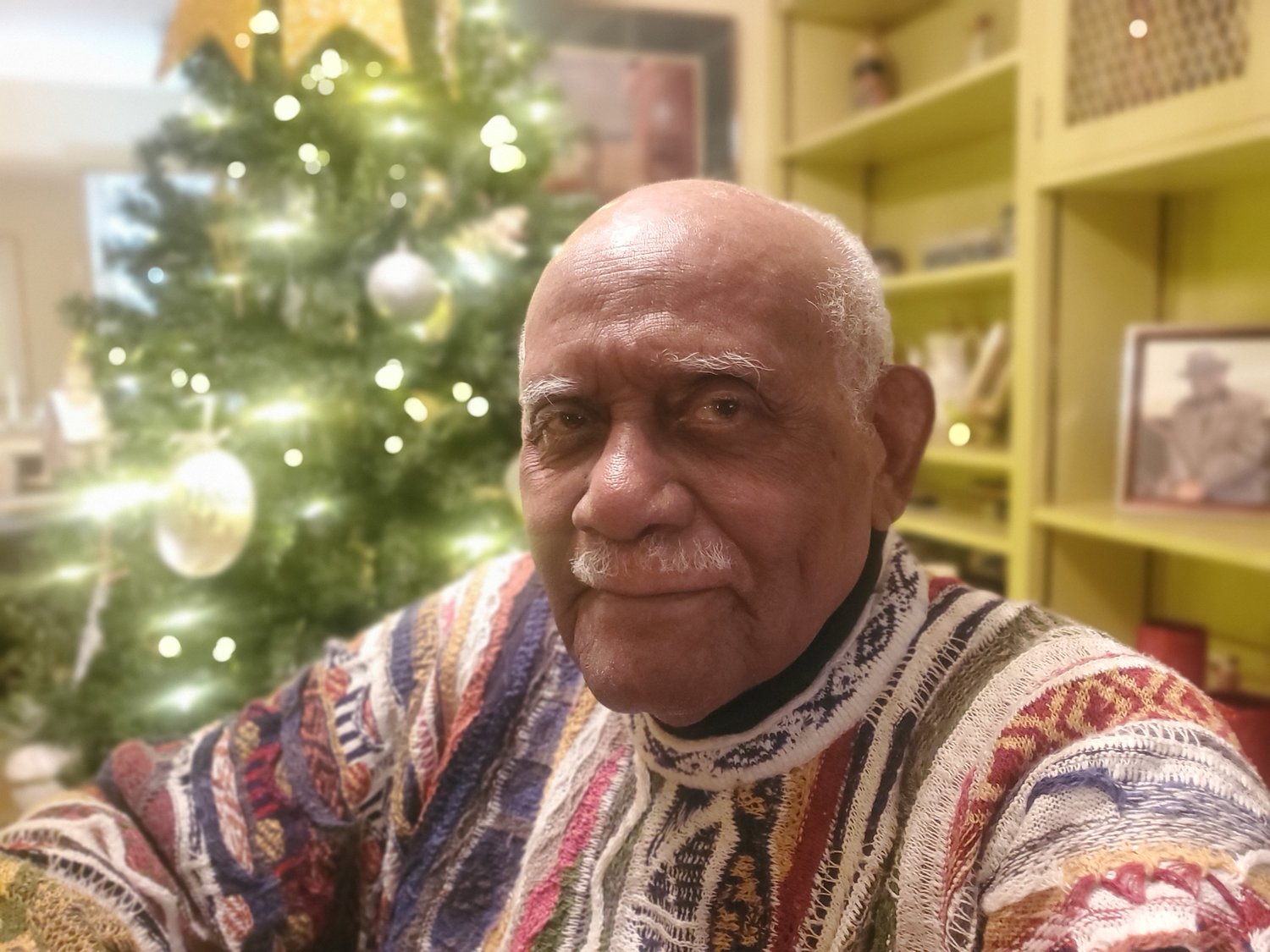 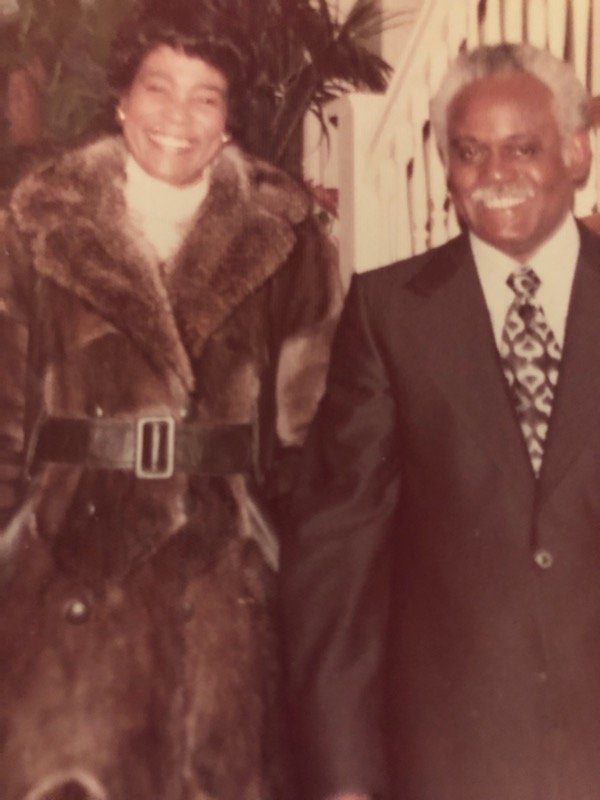 For nearly a century, Oscar Nathaniel Johnson has been guided by the principles in a biblical king’s poem about trust.

When Johnson spied his future wife at a church event in the early 1940s, he introduced himself, a move that led to a promise of contentment akin to the sacred poem’s “green pastures.”  When his wife died, years later, Johnson managed to emerge from the verse’s “shadow of death” because he didn’t face it alone.

For Johnson, Psalm 23, written by King David, served as a kind of mini-handbook through decades of joy and heartbreak. On the eve of his 100th birthday (He’ll be a century-old on Feb. 25), Johnson is still dressing sharp, pulling pranks and singing in a mellifluous baritone because, he said, “God put me here to watch over somebody, I guess.”

Johnson  lives in Mt. Airy with his daughter Jannice Turner, and they watch over each other. The family is scheduled to celebrate Johnson’s milestone with a dinner for 12 amid festive Christmas decorations that are kept up through his birthday. Johnson loves the holiday season, which gives him a chance to wear his Grinch pajamas.

These days, Johnson’s time is filled with reading from a library that includes hundreds of books, watching TV procedurals about the military, and chatting with longtime friends in the house he reveled in renovating over the years.

Johnson and his wife, Louise, raised two children in their three-story house on Carpenter Lane just off Germantown Avenue (son Nathaniel Alonzo died in 2002). Johnson worked as a government supervisor and his wife, for the police department. They attended Mt. Zion Baptist Church of Germantown, where Johnson is a church deacon, sang in the choir and served as a chairman of the trustee board.

Born in Bainbridge, Ga., Johnson moved with his family to Philadelphia when he was two. His father, who had worked extracting pine oil from trees, moved first and then sent for his family. On the rainy trip north, the family crossed the Flint River on a bridge that collapsed soon after they traversed it, Johnson said.

In Philadelphia, Johnson’s father worked at a meatpacking plant; his mother, as a housekeeper. Johnson’s parents eventually separated, and his mother moved away. Johnson and his siblings were raised by their father.

He calls the separation of his family one of the biggest challenges of his life.

“They said she was crazy,” Johnson said of his mother. “She wasn’t crazy. She just knew what she wanted and what she didn’t.” When the children visited her, “she was so happy to see us,” he said.

Growing up, Johnson was the self-described “devilish” one. He pulled pranks that set up his siblings (three brothers and a sister) for scoldings from their father, and even hurt himself in one escapade, trying to copy his father by “shaving” his face with a razor. He wound up with a severe cut and a permanent scar.

Johnson worked as a cook, a handyman doing painting and construction, and as a shipfitter at the Navy Yard in South Philadelphia before he was drafted in the U.S. Army Air Force. After basic training, he wanted to become a warrant officer but he says he was told “they didn’t have a place for him” because he was Black. Instead, he was assigned to train soldiers to fight overseas.

He felt “terrible” about the denial, Johnson said. After a three-year stint, he returned to Philadelphia, eventually working at the Navy Yard’s power plant as a contract supervisor.

He married Louise Askew in 1942, after meeting her at church.

“I met two ladies at the same time, and wrote them both letters,” Johnson explained. “My wife answered first.”

In 2002, after nearly 60 years of marriage, Louise Askew Johnson “sat right at the kitchen table and said ‘Nate, I don’t feel good,’” Johnson recalled. Two weeks later, his wife died of heart failure. Six months after that, the couple’s son died of ALS. Johnson survived that devastating shadow in his life with the help of his faith.

“God was in my corner,” he said, not meaning that he had curried some favor that allowed him to live longer, because “God was in my wife and my son’s corner too.”

Turner, a retired high school administrator, says her dad was a sometimes strict parent who is also funny, wise and opinionated. His best advice: “be yourself.”

When Turner moved to Texas for a job, her father was so upset that he stopped speaking to her for three months.

“When I took the job, I was being myself, just like he taught me,” and it eventually worked out, she said.

Johnson, who retired in 1981, follows no particular routine for his daily activities. He gets up when he wants and goes to sleep when he wants. His days of refurbishing the house, his beloved hobby, are behind him.

His favorite movies include anything having to do with Jason Bourne, westerns and “Avatar.” He “loves the blue people,” in the fantasy movie, Turner says. And, he apparently loves the green people.  Along with the pajamas, Johnson has a Grinch blanket.

He says he loves the Dr. Seuss character because “He’s not what you think he is and he’s not what he’s supposed to be. He’s loving underneath.”

It’s a theme Johnson rarely failed to touch on whenever he stood before his fellow congregants at church, except his source was loftier and sacred. Make sure, Johnson would say, to “love ye one another.”