“Miss Lillian” Clark, was inspired to create her latest labor of love by her granddaughter, Alleya. The idea for an Alzheimer's book geared to children continued to percolate until she finally finished “I Am Not Myself.” 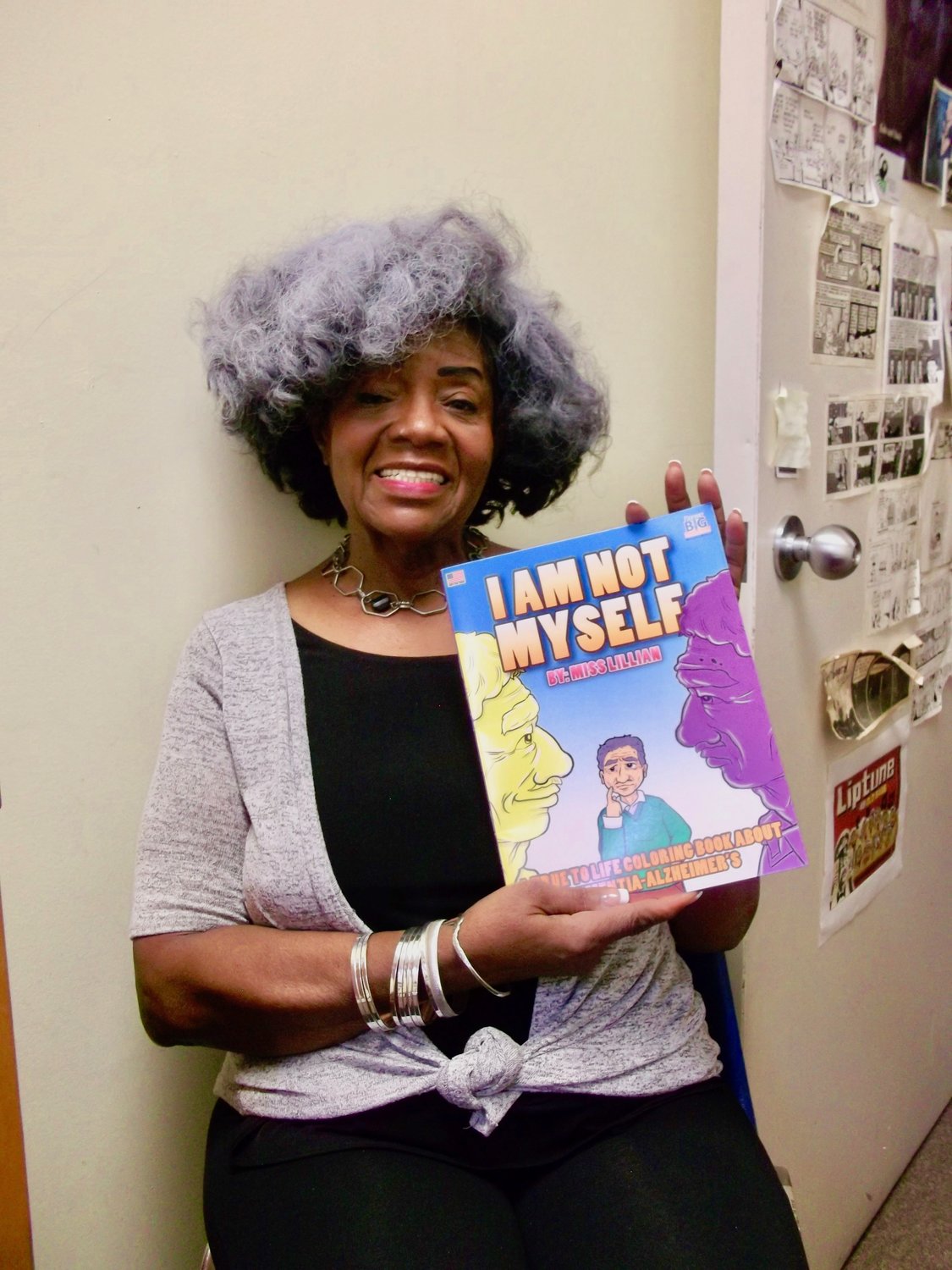 “Miss Lillian” Clark, who has lived in both East and West Mt. Airy over the last 55 years, proudly holds up her just-published coloring book, “I Am Not Myself,” designed to teach children about Alzheimer's disease. (Photo by Len Lear)
Posted Thursday, August 26, 2021 10:36 am
by Len Lear

“Miss Lillian” Clark, 79, who has lived in East Mt. Airy for 30 years and 25 years in West Mt. Airy before that, is a prolific writer who has authored 18 staged plays, children's books and countless film and theater reviews and interviews with stars for local entertainment publications during her career. But she was inspired to create her latest labor of love by her granddaughter, Alleya.

“She was visiting us one day after a brief absence,” explained Clark, “and her 'pop-pop' (Clark's husband, Robert) did not recognize her. He demanded to know who she was when she entered our home. 'Who is this,' he asked. Unfortunately, Alleya heard him. She was perplexed as to why or how pop-pop did not recognize his first-born grandchild.

“She ran into the kitchen and melted into my embrace as I attempted to offer a measure of understanding to her question. And it was at that moment that I knew I should create an easy-to-read book that would appeal to children, youngsters or anyone with an understanding as to what a dementia/Alzheimer's patient may be experiencing … My mission is to be a blessing or a comfort to those caring for their loved ones.”

Clarke, a South Jersey native who came to Philadelphia with her family when she was 14, wrote another children's book “Jonah's Kids” (Tate Publishing Company), nine years ago about racism and a young girl who hears a Sunday School teacher say something that hurts her deeply. Clarke's husband died in February of 2016, but the idea for an Alzheimer's book geared to children continued to percolate until she finally finished “I Am Not Myself,” which was published this year by Really Big Coloring Books, Inc.

By Googling, I was able to find coloring books for children about infectious diseases, biology and anatomy but not about Alzheimer's disease. Clarke sells “I am Not Myself” for $10, of which she gives $5 to the Alzheimer's Association. “I have given them over $900 so far,” she said, “but I am willing to give the books away.”

Clarke and Robert, her second husband, were married for 24 years. For the last three of those years he was in a wheelchair. “He didn't want anyone to take care of him but me,” Lillian said. “We went to support sessions at the Presbyterian Church of Chestnut Hill, where we met others going through the same thing. That was very helpful. It is gratifying to know you are not alone. Robert was driving and changing lanes without looking in the mirror until he realized he knew he had to stop driving. “

Clarke, a member of Woodmere Art Museum, was in the 1960 graduating class of Germantown High School, along with such luminaries as singer/dancer Lola Falana, jazz musician Kenny Barron. prima ballerina Judith Jamison and Flynn Edwards, fashion designer for Elizabeth Taylor.

Clarke attended Temple as a communications major and theater minor. She also graduated from the Charles Morris Price School for Advertising & Public Relations. Then she became a freelance writer but also worked for the city of Philadelphia, first at Philadelphia General Hospital and then in voter registration for 36 years overall. Her many religiously-themed plays were staged in the 1970s and '80s, mostly at Mt. Airy United Methodist Church but some at Mt. Airy Presbyterian Church and Tioga United Methodist Church in North Philly. She was also the first African American to do publicity for Old Academy Players in East Falls.

While writing for an entertainment newspaper called “Scoop” in the early 1970s, Clarke insists she “was probably the only woman in the world to stand up Burt Reynolds. We were supposed to have breakfast at the Latham Hotel. I was pregnant and not feeling well, and I simply neglected to call and cancel the interview ... One star I really liked was Cicely Tyson. She was so gracious.”

Clarke has three children, seven grandchildren, one great-grandchild and “cheerleading siblings,” Debby, Frank, Kathy, James and Cindy, Her next book will be about walking. Every morning she walks two to three miles at the Benjamin Johnston Track, Sedgwick and Woolston in East Mt. Airy.

For more information, email ez2playwright@yahoo.com. Len Lear can be reached at lenlear@chestnuthilllocal.com.