Johnnie Hobbs (right) is seen here with Daniel Fredrick in “The Shoplifters,” by Morris Panych, which was performed by 1812 Productions from Aug. 27 to Sept. 20 this year.[/caption] by Clark … 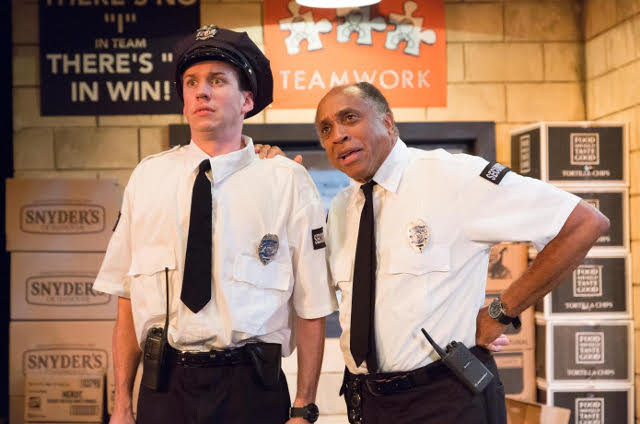 Johnnie Hobbs (right) is seen here with Daniel Fredrick in “The Shoplifters,” by Morris Panych, which was performed by 1812 Productions from Aug. 27 to Sept. 20 this year.[/caption]

“Johnnie’s such a fine person,” Childs, 47, said. “He talks a lot about ‘citizen artists’ and the responsibility to be good citizens and good people as well.”

A longtime Mt. Airy resident, Hobbs, 66, will be honored at the Barrymore Awards ceremony on Nov. 2 at the Merriam Theatre. While most people think of Hobbs as one of the local theater community’s best actors, he is also known as a first-rate acting teacher who retired in December, 2013, after 30 years on the faculty of the University of the Arts.

Johnnie Hobbs began his career as an aspiring actor in the early 1970s after finishing his military service. He trained at Freedom Theatre under the late John Allen, who was also honored with a Barrymore Lifetime Achievement Award in 1999.

“From John I learned what acting truly is,” Hobbs said. “From his perspective it’s humanity human behavior. John infused in me the importance of understanding who you are.”

Not only does he use that when he’s on stage, but he also brought it into the classroom after he began teaching young students at Freedom and later at Temple and then, beginning in 1983, at U’Arts, which was then known as the Philadelphia College of the Performing Arts.

Walter Dallas established the drama program at PCPA and hired Hobbs to be his first acting teacher. “I hired Johnnie to be an acting teacher because I had the sense that even when he wasn’t in a classroom situation, he seemed like a teacher,” said Dallas, 69.

“Johnnie believes in being in the moment. He is definitely in the moment on stage. When he’s teaching the students, he’s not condescending. The students feel they have a companion, someone who’s guiding them through, someone who says, ‘We’re in the moment together, and together we’re going to discover what this journey is all about.’ That’s what Johnnie brings to the stage and to the classroom. That’s what makes him special in both.”

Pete Pryor, an acclaimed local actor and the associate artistic director at People’s Light and Theatre in Malvern, was one of Hobbs’ early acting students. “He was a fantastic instructor,” Pryor, 47, said. “He was really involved with every student who was there. You felt like he cared and was trying to actually help individuals achieve something and not being prescriptive. [He helped the students] discover a way into what their own voice was. He has contributed so much to the cultural landscape in working with young artists. He brings something to the stage every time he acts. You can’t keep your eyes off him.”

Pryor said that Hobbs is very deserving of the Lifetime Achievement Award. “It’s because of both skill sets. He’s a great teacher and an unbelievable artist.”

As an actor, Hobbs has performed at most of Philadelphia major local theaters. In addition to Freedom Theatre, he appeared many times at the late Philadelphia Drama Guild. He has also worked at the Philadelphia Theatre Company, the Arden Theatre, 1812 and the Walnut Street. In addition to his stage work in Philadelphia, he has been on stage in Los Angeles and Boston and appeared in many movies, TV shows and commercials.

As an actor he has been nominated three times for a Barrymore Award: as best lead actor in Freedom’s 1995 production of “Black Picture Show” and as best supporting actor for “I Am a Man” in 1995 and “King Hedley II” in 2003, both at the Philadelphia Theatre Company.

As a teacher, Hobbs said, “I see the classroom as a sanctuary, as a place where students can learn how to make mistakes and at the same time stroke them and give them the leverage to support each other and hopefully learn something about themselves.

“Some of us say we were born with natural ability. That may be true. But being on the stage and being in front of the camera, you’re telling stories, and you have to learn how to use yourself effectively. That’s what I’d hope to do when I was in a classroom, allowing students to use themselves effectively, to understand who they are, what kind of power they have as an artist.”

Those close to the Barrymores report that Hobbs earned the award for his skills and his impact both on stage and in the classroom. He describes himself “as an arts educator because the bulk and the slant of my life has been in the classroom, working there and balancing acting and teaching.

“As you teach through the years, it’s sort of like spreading seeds. The growth of these folk who you had some connection with comes back. Many students thanked me. They were appreciative of the circumstances we had in the classroom. I get great joy out of that, out of the moments we’ve had in class.”

Hobbs spoke often about how honored he is to be receiving the same recognition as his mentor, John Allen. He says the award “represents a great deal of consistency and maintaining one’s level of professionalism and understanding. Professionalism to me is predicated on attitude and how you apply yourself. Do you show up? Are you a good scene partner? Ultimately it’s all about me being a good scene partner, a good storyteller and being in the classroom and being available to the students.”

Going back to his start in the business, Hobbs told the Local in a 1994 interview that he got into theater because his hoped-for baseball career wasn’t going to happen because “I couldn’t hit the curve.” (His is the only actor’s resume this reporter has seen that lists baseball under “Activities.”) Clearly baseball’s loss has been the Philadelphia theater community’s gain.