“The Crossing @ Christmas,” in the Presbyterian Church of Chestnut Hill Sunday, Dec. 19. Earlier, Chestnut Hill’s two Episcopal parishes celebrated the start of the next with choral singing of exceptional beauty. 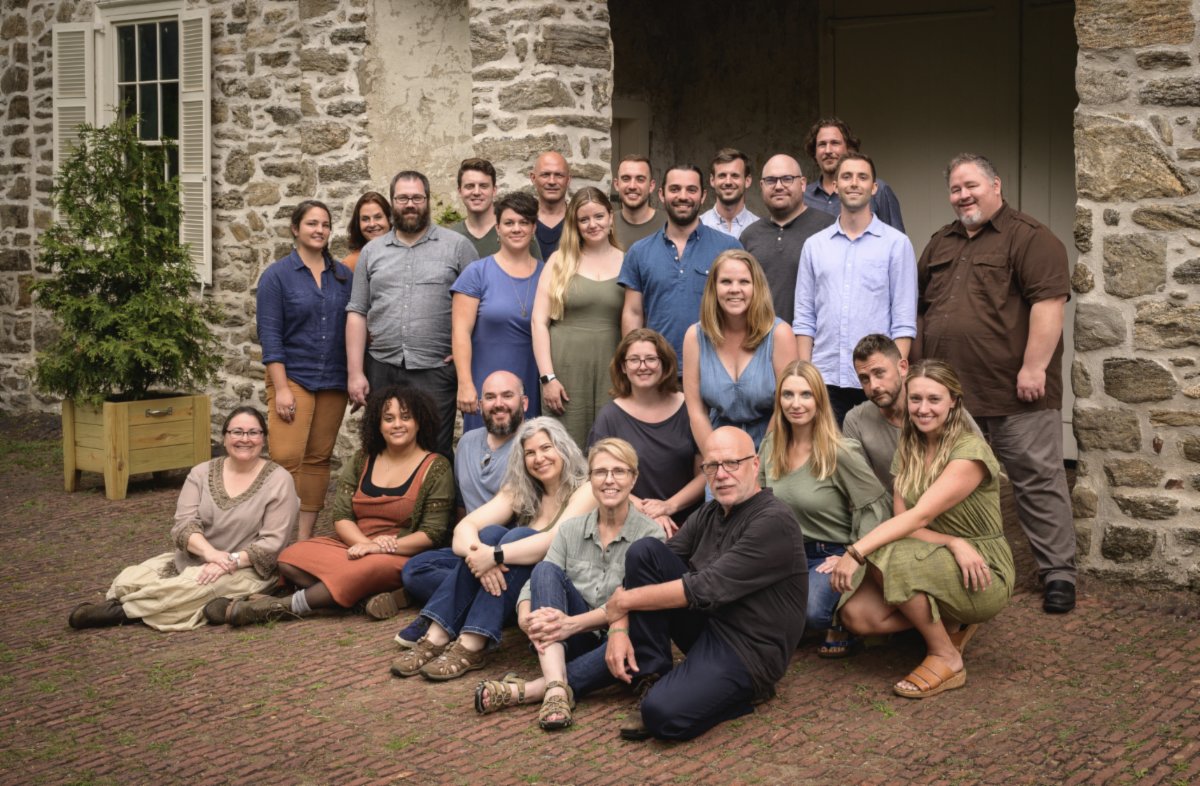 Donald Nally will conduct The Crossing in its annual holiday concert, “The Crossing @ Christmas,” in the Presbyterian Church of Chestnut Hill Sunday, Dec. 19, at 5 p.m.

Speaking about the concert, Nally explained, “Carols after a Plague was born out of the idea (and hope) that we would be viewing the pandemic in a past tense, reflecting on the various themes that dominated the months when we were not able to sing together. Isolation, fear, social unrest, hope for resolution, hope we can do better.

“We continue to live,” he said, “in the reality of our present plague, the pandemic, as well as the ongoing plagues that persist: racism, poverty, displacement, environmental deterioration, gun violence, homelessness, etc.

“As we do at The Crossing,” Nally continued, “and particularly during ‘The Crossing @ Christmas,’ we confront these topics and sit with them. We don’t have answers, but we frame questions. Here, we do so by breathing life into these twelve new ‘carols,’ which are really not ‘carols’ in the traditional sense, but rather brief unaccompanied choral works from the perspective of 12 commissioned composers.

“It seemed that a project,” he concluded, “with the potential to inspire greatly diverse results ought to have a unique commonality among the creators and ought to expand our horizons. So, we invited composers that had not previously written for The Crossing. The collection is humbling, demanding, and motivating. It is also honest, raw, and at times uncomfortable and hopeful. Much like our world.”

Nally and The Crossing just received their seventh Grammy Award nomination in six consecutive years, this one for “Rising w/The Crossing.” For ticket information visit crossingchoir.org.

A tale of two parishes

Chestnut Hill’s two Episcopal parishes – St. Paul’s and St. Martin-in-the-Fields – together marked the end of one Christian liturgical year and celebrated the start of the next with choral singing of exceptional beauty.

Kotylo, himself, bracketed the Choral Evensong with stellar performances at the organ: Craig Phillips’ “Intermezzo from Triptych” at the opening and John Cook’s “Fanfare” at the closing.

Kotylo is such a fine organist, boasting a flawless digital technique and an inventive ear for imaginative registrations, that it’s almost impossible to tell that the church is still relying upon an electronic digital instrument rather than its internationally acclaimed Aeolian-Skinner pipe organ.

The major choral works of the Evensong were the “Magnificat” and “Nunc dimittis” from Stephen Caracciolo’s “Evening Service in A” and Malcolm Boyle’s “Thou, O God, Art Praised in Sion” at the Offertory.

Caracciolo struck a clever balance between choral legato and organ staccato in the “Magnificat,” and Kotylo and his choristers delivered that balance immaculately. The composer’s tone in the “Nunc dimittis” is far more mellow, and once again St. Paul’s musicians delineated the reflective character of the score beautifully, sustaining the music’s slower tempo with well-supported singing that phrased the long melodic lines securely.

Boyle’s anthem is a festive affair, and Kotylo and his choristers delivered its high spirits with gusto. In particular, the singing of the soprano section was superb.

St. Paul’s Church will round out the Advent season with a “Candlelight Service of Lessons & Carols for Christmas” Sunday, Dec. 19, at 5 p.m.

Tyrone Whiting opened St. Martin’s service of “Advent Lessons and Carols” at the church’s lovely pipe organ with his own improvisations on Advent themes, making touching use of the instrument’s pastoral registrations. Improvisation – literally creating new music on the spur of the moment’s inspiration – was once the common coinage of all classical musicians, just as it remains the absolute necessity for jazz musicians. Unfortunately, it’s a talent mostly lost beyond those players who specialize in the early parts of the classical repertoire. St. Martin’s Church is lucky, indeed, to have an organist who can still manage the trick.

The roster of choral pieces included Poston’s “Jesus Christ, the Apple Tree,” Byrd’s “Ave Verum Corpus,” Archer’s “The Angel Gabriel,” Handel’s “Thus Saith the Lord” from “Messiah,” and Manz’s “E’en so, Lord Jesus, Quickly Come.” All were sung with polish and passion. Whiting brought the service to an impressive close with a sterling rendition of Bach’s “Fugue in G major,” BWV 541.