A proposed four-story market rate apartment building on Chew Ave. and Slocum St. sparked neighbor concerns this month as developers sought support for an upcoming Zoning Board of Adjustment hearing. 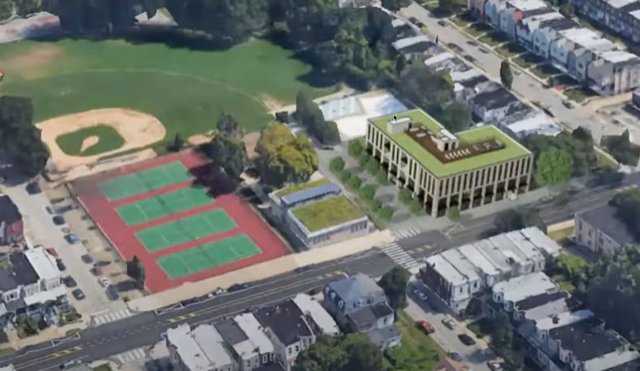 Architectural rendering by developer showing lot location next to playground for a proposed 37-unit apartment building at 6717 Chew Ave.
Posted Thursday, December 24, 2020 11:00 am
By Patrick Cobbs

A proposed four-story market rate apartment building on Chew Ave. and Slocum St. sparked neighbor concerns this month as developers sought support for an upcoming Zoning Board of Adjustment hearing Jan. 6 that could make or break the project.

East Mt Airy Neighbors plans to oppose the 37-unit project at the hearing, largely because of its size, a feature that owners, Audax Properties of Doylestown, said is needed to mitigate what they see as an expensive hardship on the site.

“With the amount of environmental cleanup we have to do,” Audax representative, John Thomas said in an online meeting with neighbors December. 8. “For it to be a successful project, we need to have the 37 units.”

The lot, virtually next door to busy Pleasant Playground and the community pool there, used to house a gas station. A 2017 environmental study identified six underground gas tanks, an oil tank, and two hydraulic lifts that still require attention, and it found contaminants in the soil. To pay for that cleanup and still make money, the developers felt they had to go outside of existing zoning allowances.

A city zoning review denied the project in September, requiring developers to meet with local residents for three reasons. The site is zoned for commercial use, not residences. There wasn’t enough parking with 21 proposed on-site spaces. And the building size was too big. Each of these requires a zoning variance for the project to go forward. The January ZBA hearing will consider the variances.

The ZBA listens to near neighbors in a situation like this, and they were out in force at the EMAN meeting December 8. One hundred and thirty-one stake holders attended that Zoom call and many neighbors questioned the project.

Concerns included an overflow of parking on already crowded streets and increased traffic where kids and families use the playground.

Neighbors on the 300-block of Vernon Rd., directly behind the project, worried a 38-foot building so close would be like looking at a wall out their back windows, and there was wide speculation about the shade the building might cast over the community pool.

Nearby resident Lativa Davis said she wants the lot cleaned up and developed, but the building Audax wants “is an imposition to the neighbors and recreation center and playground.” She’d be happy with a smaller apartment building on the site.

Thomas, whose company bought the lot in July of this year, said the 10 studios, 21 one-bedrooms, and 6 two-bedrooms, and the average rent of $1,200 per month would, “attract young professionals.”

Some saw this vision as a force that seeks to change the largely black, low-to-middle-income, family-oriented community, and the developer’s decision not to go to EMAN with their plan before being ordered to as a result of their zoning refusal didn’t help.

Neighbor Bonnie Zuckerman said, “When the plans are already submitted to the city and a ZBA date is given, neighbors do not have the time nor the leverage to negotiate for more equitable plans. We are focused on stopping the proposed plan.”

Thomas said he would work with the concerns, offering 1,100 square feet of meeting space on the first floor of the building for reduced rent to community groups, “a few” lower priced units, possible support of the playground, and a green roof that would reduce rain water run-off. He did not budge on the proposed size of the building or on-site parking.

His company may have an ace in the hole. The Upper Northwest District Plan, adopted by the City Planning Commission in 2018, calls for eventual re-zoning of that lot to a residential designation that could allow everything the developers are asking for without a hearing or community input. Their proposal, Audax could argue, is in line with the established vision for the area, despite neighbor objections.

This proposed zoning change for the lot to residential must be passed by City Council.

An announcement on the popular neighborhood connection site, Next Door, appeared recently encouraging residents to come out for the virtual Jan. 6 ZBA hearing and speak their mind.