They hired a lawyer to uncover zoning violations, sent a letter to the Chestnut Hill Community Association, and met with Cindy Bass. 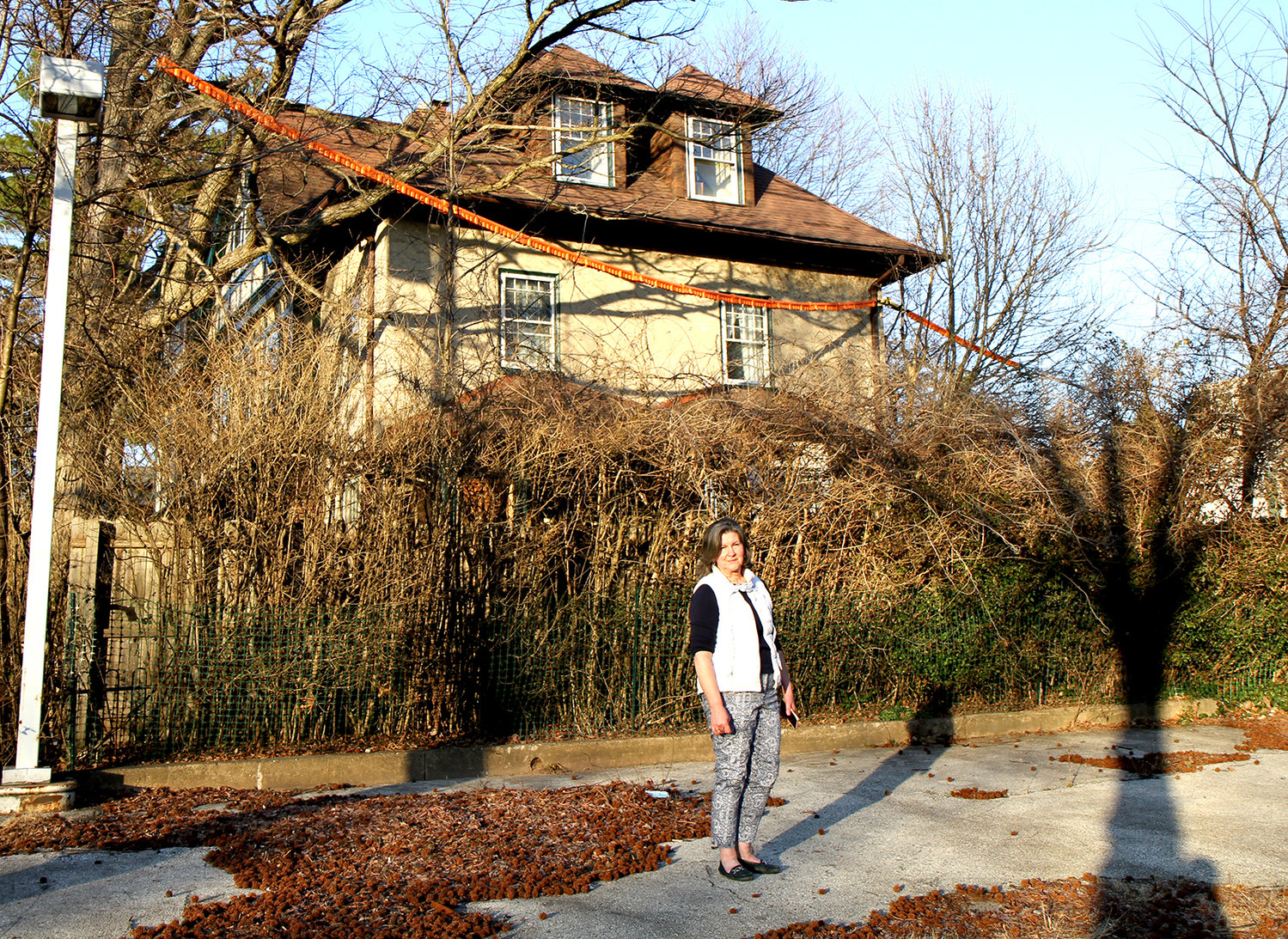 Maureen Pié-Bruno on the proposed building site at 10 Bethelehm Pike. She’s concerned a proposed apartment building would block the evening sun from her home, behind her. (Photo by DB Fromm) 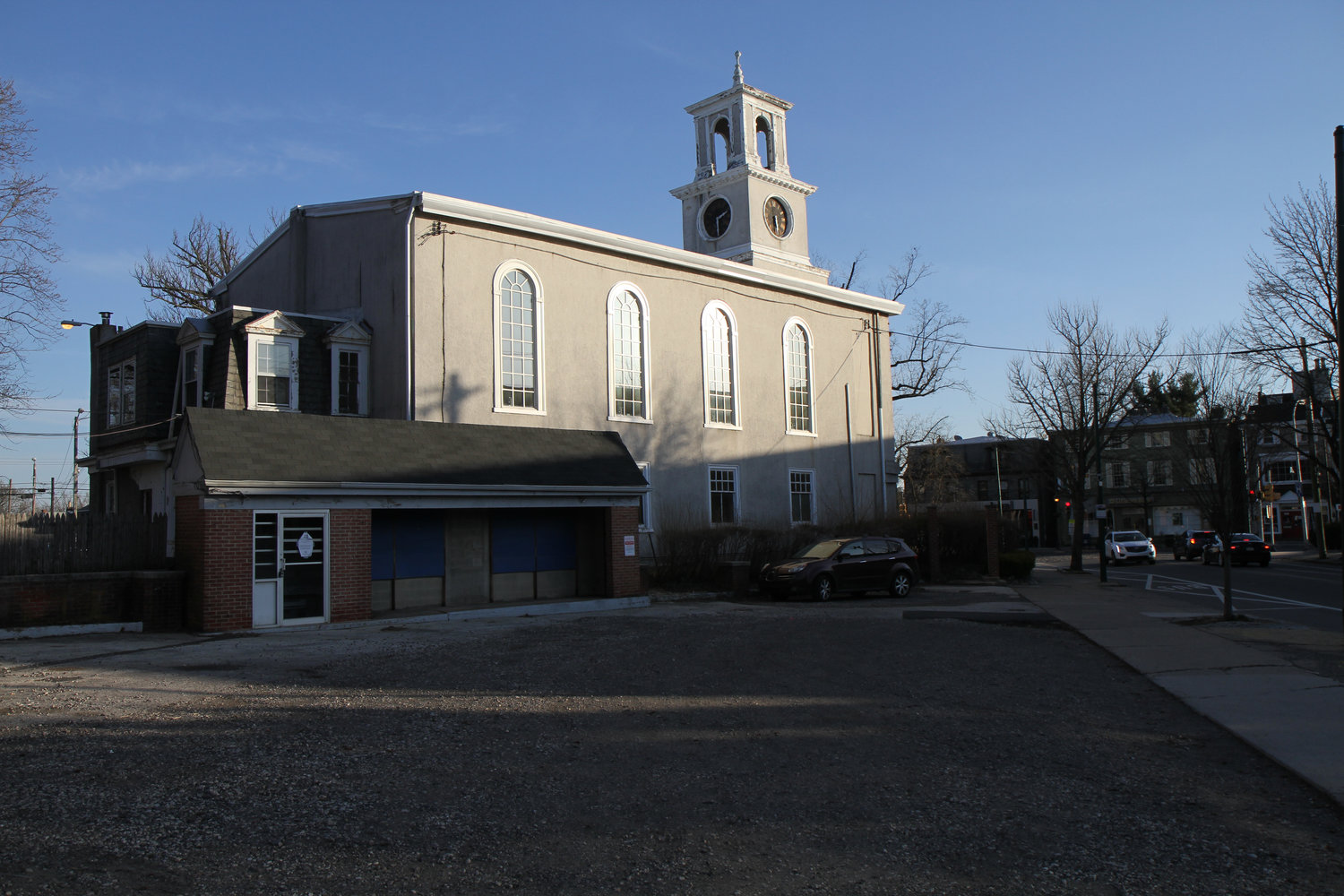 They hired a lawyer to uncover zoning violations, sent a letter to the Chestnut Hill Community Association, and met with Cindy Bass.

Near-neighbors to the old top of the Hill Sunoco station have organized to oppose the design of a proposed apartment building on the site.

Frankel Enterprises, a locally and South Florida-based real estate development group, purchased the property from Tom Maloney, who still owns the Flourtown Sunoco. They unveiled the plan during a CHCA Development Review Committee (DRC) meeting in February that called for a 34-unit apartment building. Afterward, by word of mouth and email, residents on Summit St., Bethlehem Pike, Prospect St., and Evergreen Place pooled funds and retained a zoning lawyer to scrutinize the plan for possible violations. The effort is spearheaded by Jeff Duncan, a retired former Capitol Hill Chief of Staff and Democratic lobbyist.

The group submitted a letter to the CHCA and Frankel detailing their grievances, along with a list of nine points of potential zoning violations and elements lacking in the plan. The grievances include parking concerns, the capacity for current utilities infrastructure to handle the project, and the scale and aesthetics of the building being out of character with the neighborhood. Setback issues are principal among the zoning issues.

Included in the group of neighbors are Maureen Pié- Bruno and her husband Jim Bruno, who both grew up in Northwest Philly, as did their parents and grandparents, and have lived in their home next to the Sunoco for more than 30 years.

The project also threatens the ample afternoon sunlight to their home and yard, as well as the airflow and privacy. The submissions were followed by separate meetings with Max Frankel, who is leading the project with his brother Zach, and CHCA President Kathi Clayton and Executive Director Anne McNiff. The neighbors and CHCA then met with Councilwoman Cindy Bass and her staff, who are reportedly sympathetic to their concerns.

The property in question sits directly adjacent to the Chestnut Hill Baptist Church, the oldest in the neighborhood and an architectural cornerstone at the highest point in the City. Given the planned building’s height and minimal setback, it would significantly impact the natural light flowing through the church’s large windows. Last week the Local published a letter addressing the plan from the church’s pastor, Dr. David Siep.

After the meetings, the neighbors learned from the CHCA, by way of Councilwoman Bass’ office, a supposed “by right” permit application had been submitted to the Department of Licensing and Inspections (L&I). “By right” permits, if approved, do not require zoning variances or community approval. Neighbors fear the application is an aggressive tactic known as “going nuclear,” whereby permits are secured for negotiating leverage over the community. If some concessions are made, other advantages might be gained by securing community-approved variances.

In the February DRC meeting, the developers had presented the “by right” plan with slightly below-grade retail space on the ground floor, as well as an alternative above grade option requiring a variance. Reached for comment by email, Max Frankel said his group “strive[s] for responsible and sustainable development and it is our intention to be forthcoming and address the concerns that have been brought to our attention. We have proactively approached the Chestnut Hill community early on in the process to gather their input and priorities for the site, and are working to incorporate them into our plans.”

Nonetheless, if the pending application is approved, the neighbors’ alliance and the CHCA have agreed to join forces and share legal fees to appeal the decision.

Also by email, McNiff said “[t]he Association is in agreement with the neighbors there are significant problems with the scope and size of the proposed project in its current form,” and the CHCA “is not opposed to smart development; where the developer(s) have taken the time to understand the Chestnut Hill community and strive to create something that does not significantly negatively impact the neighbors, the greater community, and any future development.”